Spider identification made easy starts with the types of spiders that people normally come across in daily life. They are often found in homes, gardens and lawns across North America. The video shows your basic spider and yellowjacket story with one of the very common orb weavers, a Cross Spider as the protagonist.

Press any button to learn about some of the spiders discussed in the article. Or continue reading below.

The spider pictures presented in this section use both methods, and it starts with an always hot topic, common house spiders.

Using the widest of definitions, all types of spiders found within a residential dwelling might rightly be placed in the house spiders category.

In fact, most people’s squeamishness around spiders often translates into dramatic interpretations regarding their presence. To this population, it almost goes without saying that any spider found in the house is naturally a giant, gigantic, large and hairy, scary spider, or something close to that description.

True enough. One spider species, Eratigena atrica, a member of the funnel weaving family pictured at the top of the page, also formally goes by the name Giant House Spider because it can grow up to four inches from leg to leg. Its close relative, Eratigena agrestis goes by the name Hobo Spider, with unconfirmed reports of its being a spider of medical importance.

Sometimes house spiders can be a tad bit big and scary.

Considering all the types of spiders that live in residential areas, it’s a safe bet that all houses occasionally host at least one spider. 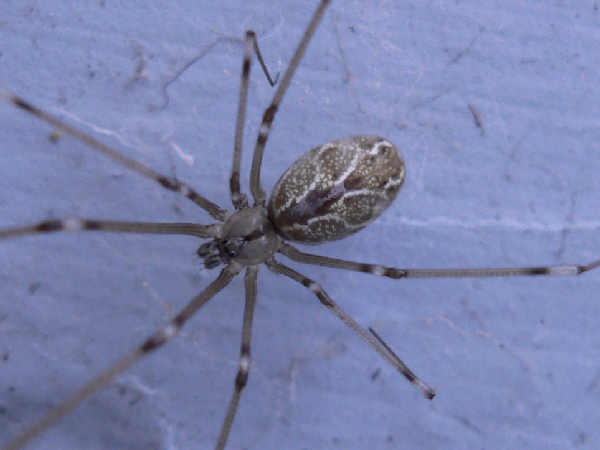 Cellar Spiders rightly belong in the common house spiders category. Their long legs makes the nick-name daddy long legs appropriate. However, their two body parts puts them in the spider category rather than the Opilione category of another daddy long legs species. The picture shows a close-up view of the cellar spider’s two body parts.

While cellar spiders might be considered an eyesore, they are harmless. 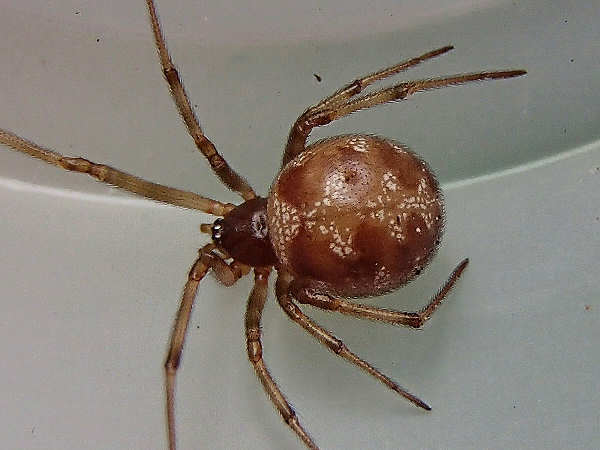 With close to two hundred and fifty species covering over thirty genera, there’s a good chance that a cobweb spider (family Theridiidae) makes its way into the average household. Of course the real problem with cobweb spiders boils down to a few species in one genera, widow spiders in the genus Latrodectus.

Apart from the widow spiders, which fortunately prefer outdoor settings near woodpiles in residential areas, the presence of cobweb spiders in the house presents little cause for concern.

Initial identification of the cobweb spiders is rather straight forward. Most have extra large front legs. Their abdomens tend to be more rounded in shape. The picture shows the triangulate cobweb spider (Steatoda triangulosa) probably the most wide ranging of the species and the most common cobweb spider found in homes and sheds across the United States. 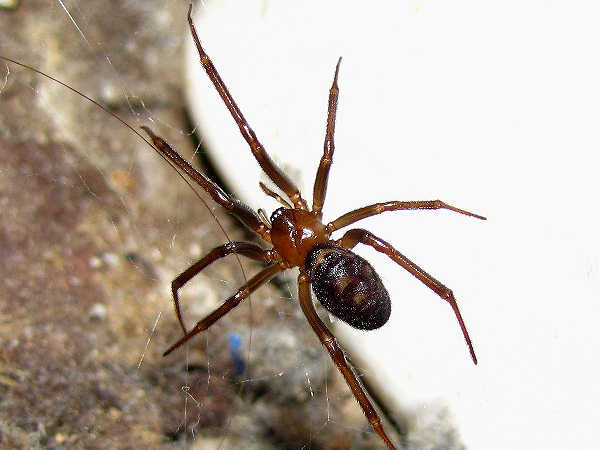 Often the Steatoda species acquire the nickname false widow. The name false widow comes from the spider’s looks. From a distance, the body often appears dark, like the black widow spider. The picture shows a less common species, Steatoda Grossa. With the legs extended, it measures approximately and inch and one-quarter in length.

Their bites are known to cause pain and discomfort for a small portion of the population, however for most people, their bite produces no side effects. 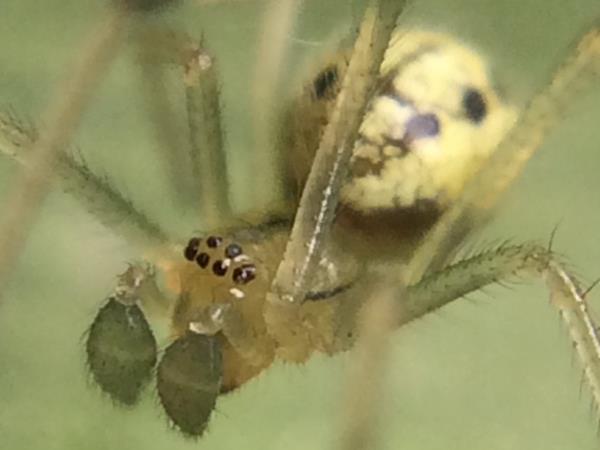 Less well known is the fact that many cobweb spiders, including widow spiders, also find a home in the great outdoors.

The picture shows Enoplongnatha ovata. Note how the first set of legs are the longest. That’s another physical characteristic shared by members of the family. 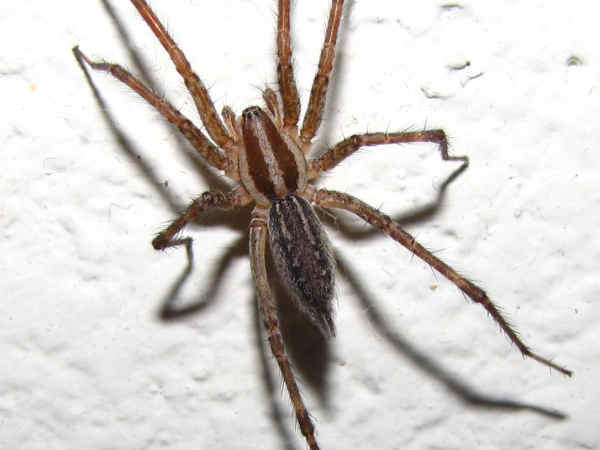 Often called grass spiders, the funnel web spiders (Agelenidae) also occasionally wander into houses during cool weather. Looking at their tail end represents one general funnel web identification rule of thumb. Many species have extended spinnerets and this differentiates them from wolf spiders.

A close up picture of the eyes also helps with identification. Funnel web spider eyes are arranged in two narrow and relatively straight rows. The eye arrangement gives them a forward looking appearance.

Most funnel web spiders are not considered dangerous to humans. The Hobo Spider in the Pacific Northwest would be the exception. 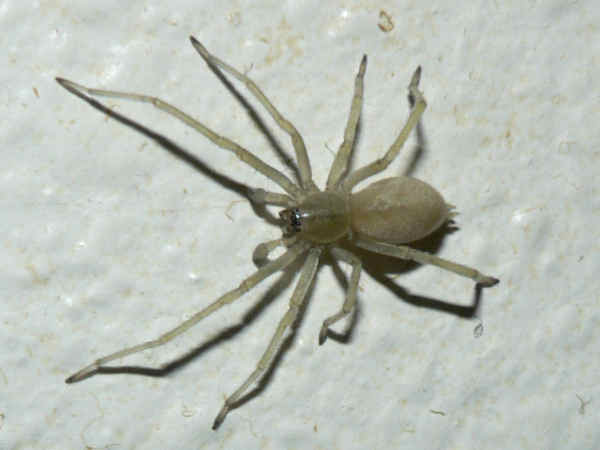 Yellow Sac Spiders (Cheiracanthium) commonly inhabit residential areas and can wind up on walls. While they are not considered spiders of medical importance (more commonly known as poisonous), their bite can be painful.

There’s a Spider in My Bathtub 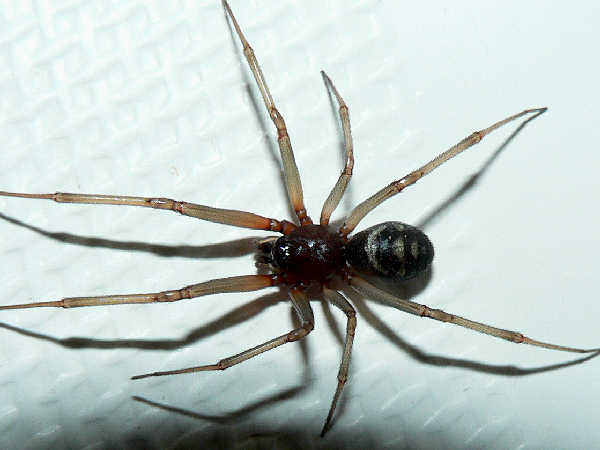 How many times have you heard, said or thought the question, “there’s a spider the size of a tennis ball in my bathtub, what should I do”? There are two answers to the question.

First, you can take comfort in knowing that the question is commonly heard in households with bathtubs around the world. Spiders and bathtubs go together like peanut butter and jelly. The reasoning is simple. During the mating season wandering male spiders travel around the house. They accidentally fall into the bathtub and are unable to escape because of the tub’s slippery sides.

Given the configuration of most modern plumbing systems, it is highly unlikely that the spider crawled up through the drain.

The second suggestion would be to check your math. It is not uncommon for people to exaggerate the size of a spider on first sight. If the spider in the tub is really the size of a tennis ball, there is good news. Your spider is most likely not the more dangerous hobo or recluse spider. It is probably a giant house spider on the West Coast or a Hunstman’s spider in the Southeast.

The third course of action is optional, depending on the number and squeamishness levels of the household members. The least squeamish member can trap the spider under a glass, slide a sturdy piece of cardboard beneath the opening, and carry and release the spider in the outdoors.

Please remember to release the spider some distance from your house, or chances are he will soon visit again. House spiders rank among the speediest spiders on earth and yours may very well race you back home.

What Do Spiders Eat?

Spiders, long considered carnivores, (although there might be exceptions to that rule), traditionally choose insects and other arachnids as their primary source of food.

Arachnologists, scientists who study spiders, have long been intrigued by spider diets. One question they consider, “Are Spiders Picky Eaters”, has been the subject of both observation and scientific experimentation.

A pair of arachnologists conducting experiments on the pickiness of spider eating habits, started with the hypothesis that spiders eat any insects that come their way.

They conducted an experiment with an Araneidae species, an orb weaving spider (Micrathena Gracilis).

Testing the null hypothesis meant that the researchers thought that the spider would eat all the insects that landed in the web, regardless of insect size.

At the end of their experiment, they concluded that when given the choice between large and small insects caught in the web, the spider preferred larger insects.

In scientific terms, they concluded there was a statistically significant relationship between spider diet and insect size. The hypothesis that spiders are picky eaters still stands.