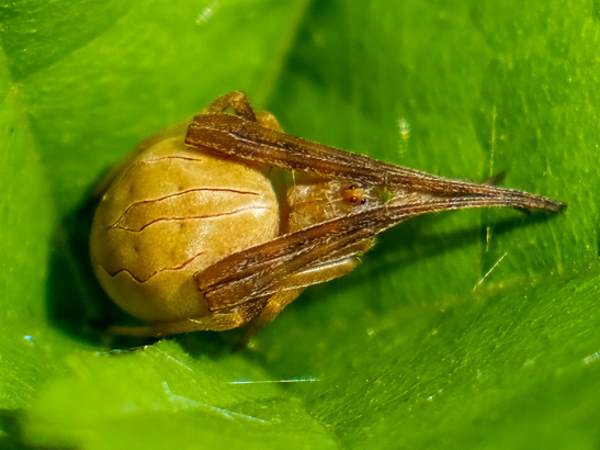 From the more specialized research covering tallgrass prairie spiders in the state to the more conventional documentation of home and garden spiders, Ohio takes Ohio spiders seriously. A northern climate means that Ohio’s outdoor spider season generally runs from early spring through late fall. Common indoor spiders such as cellar spiders and cobweb spiders can be found year round.

The current checklist of Ohio spiders lists about six hundred and fifty species. What does the checklist tell us about the types of spiders in Ohio?

First, consider how the experts discuss spider species. An article in the Journal Cladistics 25 (2009) called, Higher-level phylogenetics of linyphiid spiders (Araneae, Linyphiidae) based on morphological and molecular evidence introduces the topic as follows.

Those trends also apply to both the United States in General and Ohio in particular.

The top five types of spiders in Ohio according to the number of species are as follows:

Together these five families account for 3884 spider species or roughly 60% of all Ohio spiders.
Spiders

Spider watching generally lacks the same appeal as bird watching or butterfly watching. Therefore, it’s fairly safe to say that the average Ohio resident does not invest much time thinking about sheetweb and dwarf weaving spiders. With very few exceptions they are small spiders, one-eight inch in length or shorter. Seeing their small, flat webs along the grass line or bottom of the bushes in the morning dew represents the best way to document their presence in the neighborhood.

Ohio spiders in the other four families grow substantially larger, making them much easier to spot and document. The top picture, for example, shows Acacesia hamata. It’s the only species in the genera and because it tends to build webs at dusk for night hunting, it’s one of the less commonly seen orb weavers. The stripes on the abdomen make it fairly easy to identify. 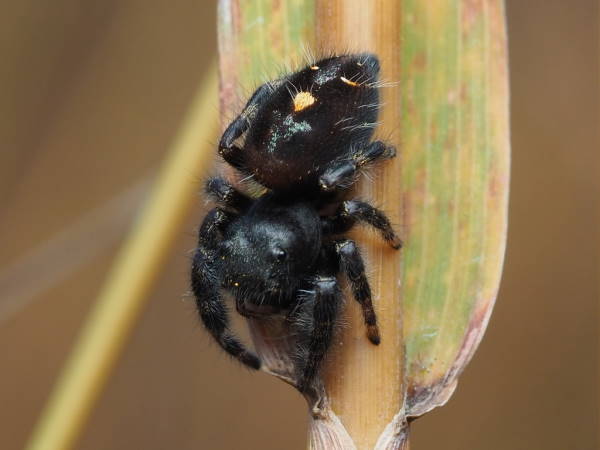 Identifying Ohio Jumping spiders begins with a few words of caution. On the one hand, some species, especially the larger and more prominent members of the Phidippus genera can be easily identified to the genera level due to the presence of red coloration on one or both body parts. On the other hand, many Phidippus species go through physical body changes as they mature, making all but the mature species a bit difficult to identify.

Bold Jumping spiders are probably the most widespread Phidippus species in the United States. In many residential areas they are year round residents that move indoors during the colder weather. The mostly black body bucks the color trend for Phidippus. 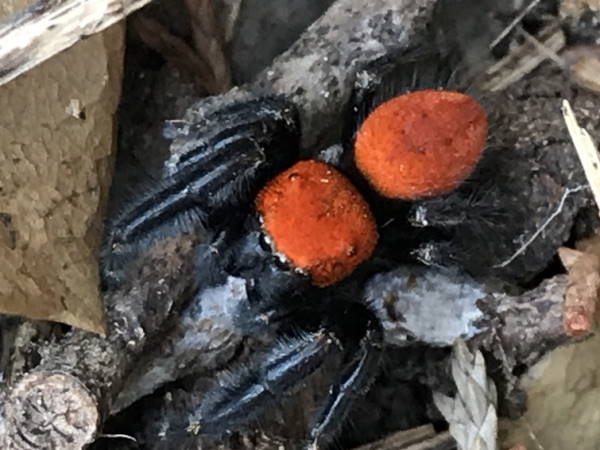 Please press the spiders button for additional spider pictures and information covering many of the jumping spiders. The entire spider guide covers over one hundred different spider species. The following presentation of spider pictures covers a representative sample of the more beneficial, common house spiders and lawn and garden spiders in state.

As mentioned in previously, sheetweb spiders inhabit most Ohio grass lawns. The share space with a variety of spider species, including the larger and more conspicuous funnel weavers, especially the grass spiders (Agelenopsis genera). A cursory examination of the web provides the best clue for identifying them. Funnel webs have a definitive hole built into them. Ohio follows that same general pattern. Five grass spider species are documented in the states. The Pennsylvania Grass Spider (Agelenopsis pennsylvanica) is the most common.

Putting aside the widow spiders, the vast majority of Ohio’s cobweb spiders live outdoors and don’t come anywhere near the house.

Another group of common lawn and garden spiders such as the crab spiders and lynx spider don’t often show up in the house. Think, for example, how often one might see the very common and large Green Lynx spider in the house. Green Lynx are also complimented in the garden with their smaller Striped Lynx relative. Crab spider species are abundant in Ohio. Most people easily recognize the more colorful flower crab spiders with their white or yellow striped bodies. Less well known is the fact that a handful of smaller and duller ground crab spiders also inhabit Ohio lawns. Often a detailed inspection of the body is necessary to identify these crab spiders at the species level.

A quick glance down the Orb Weavers column shows many of the common spices. Arabesque Orbweavers, probably the most common of Ohio’s orb weaving spiders, are identified by the presence of the short dark slashes along the center of the abdomen. The two pictures highlight the fact that the body can have different colors.