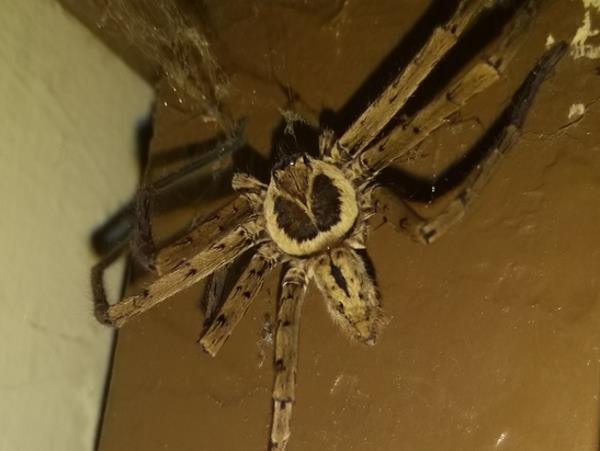 Year round residents more than tourists know first hand that Florida spiders are a year round thing. Warm weather and the presence of insect prey makes for the perfect spider recipe.

Most interest in spider identification comes from people who see spiders in their homes and apartments and want to know if the spider is dangerous. For example, there’s nothing like seeing a five inch Huntsman spider (top picture) hanging out in he garage or around the patio to scare the bejeebers out of anyone.

Fortunately they are not dangerous. In fact they consider nuisance insects such as cockroaches as five star dining. 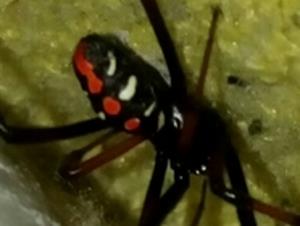 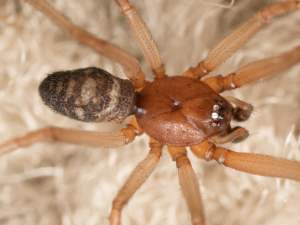 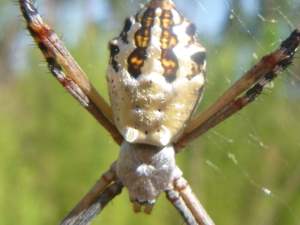 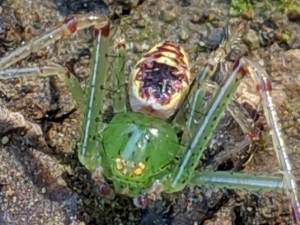 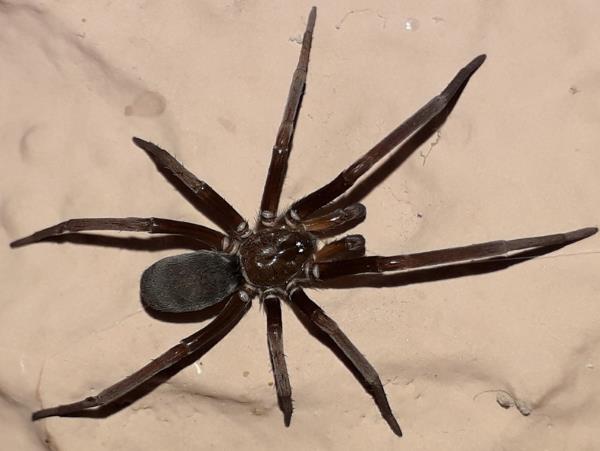 Florida sure does have big house spiders. In addition to the Huntsman spider, add the Southern House spider to the list. Their bodies are over one half inch in length and their legs add more length.

Formally they belong to crevice weavers and build webs in crevices around the house. Again, they are not considered dangerous, just large and scary to individuals who are not spider enthusiasts.

A couple of additional Stedota species go by the name False Widow spiders and they often wander indoors.

That leaves the widow spiders of the Genus Latrodectus to discuss. They are the most common of all the poisonous spiders. Four species live year round in Florida.

While they normally build nests low to the ground in brush and woodpiles,the bottom of barbecues or lawn chairs. Occasionally one can be found indoors, especially in back yard sheds.

Learning more about how to identify the different types of cobweb spiders in the house can be as easy at attaching a small, inexpensive macro lens onto the smart phone and comparing pictures.

Grass spiders also known as funnel weavers, often wander inside the house. Most species also look very similar with thin, striped brown bodies. The long spinnerets at the end of the abdomen help differentiate them from the wolf spiders.

Crab spiders usually do not venture indoors. Rather they tend to the flowers around the house. TThe picture shows two species with white bodies and red stripes. Three genera of so called flower crab spiders come in a variety of colors, including yellow. Eye patterns and body hair are the proper way to identify them.

Five Nursery Web and Fishing Spider species can also be found near residential areas, although with less frequency than other types of spiders. They generally have medium sized bodies with indistinct colors that help them blend into their environment.

To the untrained eye, they can look like wolf spiders or grass spiders.

The presence of colorful bodies with distinctive patterns make Florida spiders in the orb weaver category among the easiest spiders to identify.

Golden Silk Orbweavers, for example have thin brown spotted bodies. The presence of the largest orb shaped web in the United States makes it hard to miss them anywhere they live.

Species from three genera, Araneus, Neoscona and Argiope are probably the most common back yard orb weavers.

Black and yellow garden spiders are probably the most common argiope spiders. Florida also has its own distinct version of a Silver Argiope, (Argiope florida).