It’s difficult to come by a comprehensive guide to Massachusetts spiders, however, spider diversity in the state has been documented in a variety of ways. Two of those attempts provide an introduction to the topic.

First at bat for Massachusetts spiders is a 1997 study from the The Journal of Arachnology called Behavior And Niche Selection By Mailbox Spiders. Basically it’s a review of spiders documented by mailman on a rural Cape Cod route during an eight year time span.

Of the approximately 500 species in rural Massachusetts where the mailbox study occurred, 72 species took up residence in the mailbox. Of those, 39 species were considered year round residents.

April through October marked the typical spider species, with June and July being the best months for spider diversity. 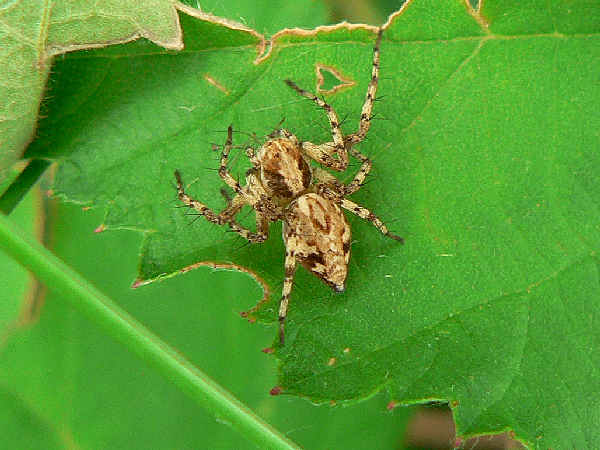 An examination of the 39 year round resident spiders suggests that many of them fit into the traditional common house and garden spiders category, such as orb weavers, crab spiders, jumping spiders, cobweb spiders and lynx spiders. The picture shows a Western Lynx spider, one of the mailbox species.

Additionally, a review of the spider species also suggests that most of those same types of spiders are also common in more suburban and urban settings.

Lack of statewide Massachusetts spiders data means working on the assumption that sheetweb and dwarf spiders are the most common spiders in the state, because they are the largest family of spiders in the United States.

Most species are small and inconspicuous. Usually they do not draw the attention of the average spider enthusiast. However, they are probably in almost every yard in the state, building messy webs in the shrubs.

The Filmy Dome Spider in the video at the top of the page ranks among the largest members of the family. The video shows one hanging on the web. It’s not suspended in air, much of the web is not visible.

Again, only probably, jumping spiders ranks second in Massachusetts back yard spider diversity. They can be found on can be found on the ground, on the branches of the shrubs in the yard or in the tree canopies. Phidippus are probably the easiest jumping spider species to identify. They have iridescent jaws and colorful bodies.

Over the past fifteen years, Massachusettts residents have also been contributing their spider finds to Bugguide. Orbweavers are a common subject of the photographers’ lens because they are often the medium sized spiders that remain stationary for a sufficient amount of time to enable almost anyone to snap a picture, upload it to the site and document a species.

Approximately four hundred orb weaver specimens have been submitted to the site, covering about three dozen species. One dozen of the species belong to the Araneus genus, one of the most common groups of spiders found in yards throughout the state.

Garden Spiders in the genus Argiope and the Spotted Orbweavers (Neoscona) also can be seen in many back yards.

Larinioides species such as the Furrow and Gray Orbweavers also go by the common name foliate and bridge spiders. They are less commonly found in yards. Water areas and bridges are heir preferred habitat.

The picture at the top of the section shows a Gray Orbweaver, the bridge spider.

The small gallery below shows an additional dozen or so orb weaver species common in Massachusetts. It is followed by the complete checklist. It contains the common name for the spiders where applicable. 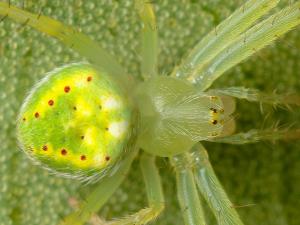