If any types of spiders can be called cute, it’s the jumping spiders. They have quite the story to tell. Small in size, their binocular eyes represent their defining physical feature. The four eyes across the forehead is the best tip to offer for anyone who wants to know how to identify jumping spiders at least to the family level. The common name jumping spider refers to their travel habits. In addition to their walking around brush, the ground and human structures in search of prey, they use their silk as a sort of bungee cord to help them jump from place to place. The video at the top of the page focuses on a variety of jumping spider species with an effort to highlight their eyes and jumping ability.

Given such a large number of species and genera, only a book sized review could offer a comprehensive jumping spider identification guide. This primer of the jumping spider pictures provides a sample of representative species. It covers three different pages, with the buttons appropriately marked Jumping Spiders 2 and 3. The green spiders button at the top of the page points to information covering many other spider families. 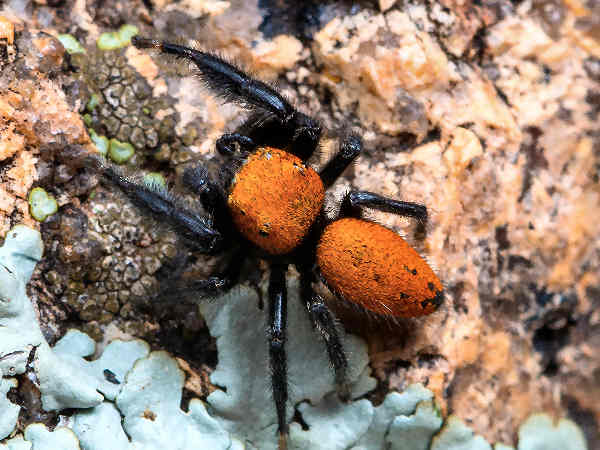 Jumping spider identification begins with the most easily recognized and colorful members of the Phiidippus genus. Sixty different Phidippus jumping spiders have been identified in the United States. That probably makes them the most common type of jumping spiders to inhabit residential areas.
Identification often starts with noting the green chelicerae (jaws) and body color. Red bodied Phidippus species also inhabit most areas of North America. Identification starts by noting the placement of the red on the body along with the patterns on the body that might be present.

The first picture under this heading, for example, is of the Cardinal Jumper. The red on the head and the body are the best field identification clues. Mature females look similar with a prominent white dots and thin black stripes on the abdomen. They are one of a handful of red bodied Phidippus in the Southeast and a bit of the Midwest. 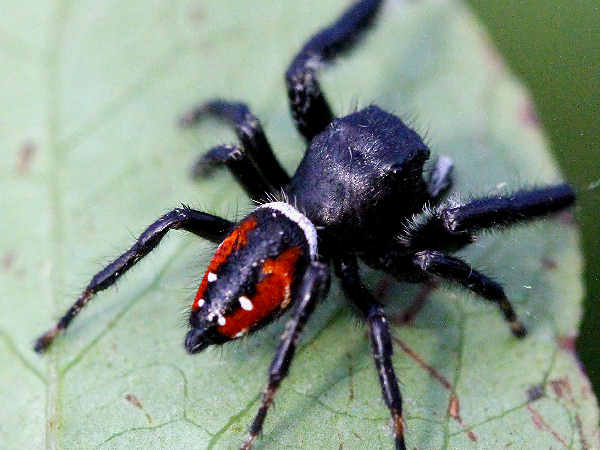 Compare it with the next picture, Phidippus clarus. This species is found in most residential areas of the United States. The body has a white stripe across the top, patches of red on the side and some white dots. The head is a solid black color. 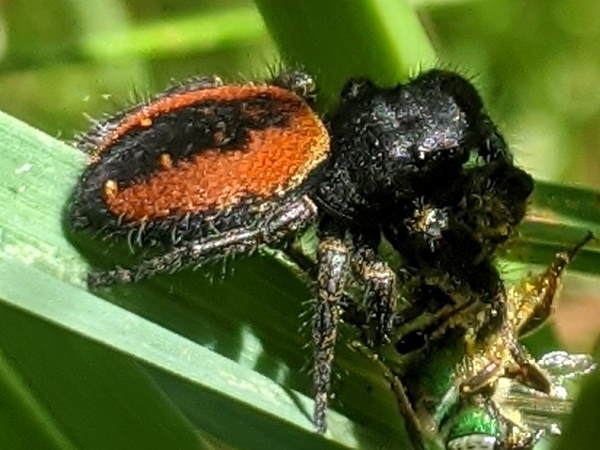 Johnson’s Jumper (Phidippus johnsoni) is the dominant Red bodied jumper in the West. Females like the one in the picture have a black stripe down the abdomen, surrounded by red. 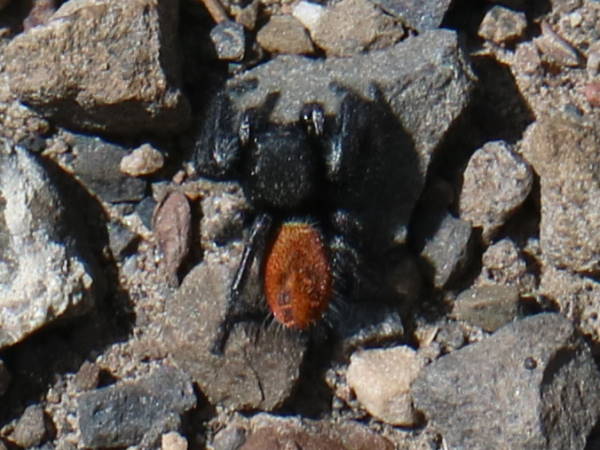 Males have an all red abdomen and black head. They are also very hardy spiders that can be found from about March through October in the northern most range. In the south they can be found year round. 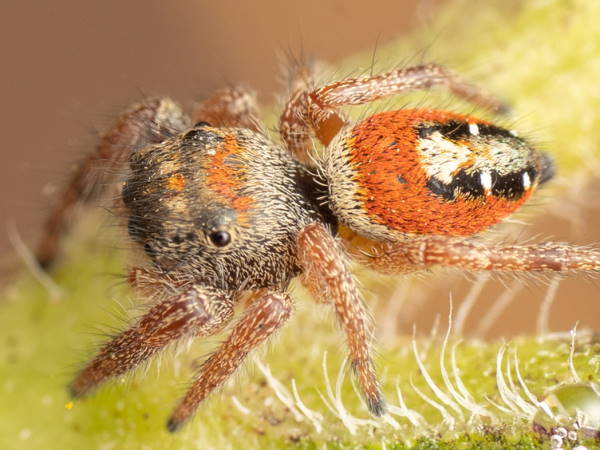 Phidippus adumbras is a California species. The picture shows a female with the small pattern in the center of the red abdomen. 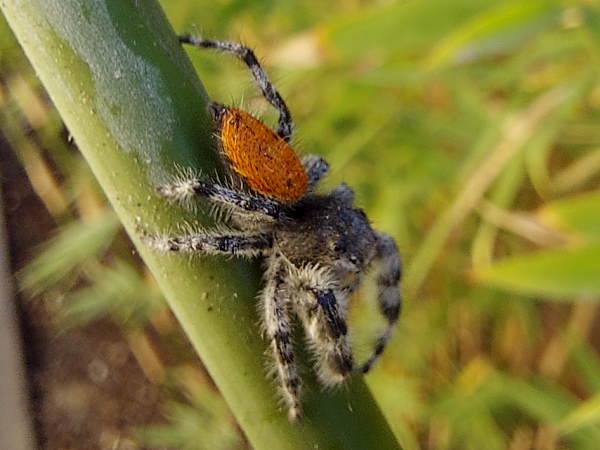 Male adumbras have an all red abdomen. 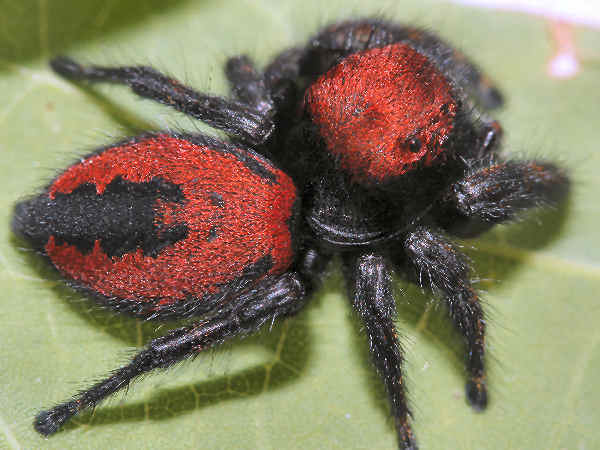 The Apache jumping spider dominates the range East of the Rockies and West of the Mississippi River. The head and the body have red spots. The body also has a black patch at the bottom. 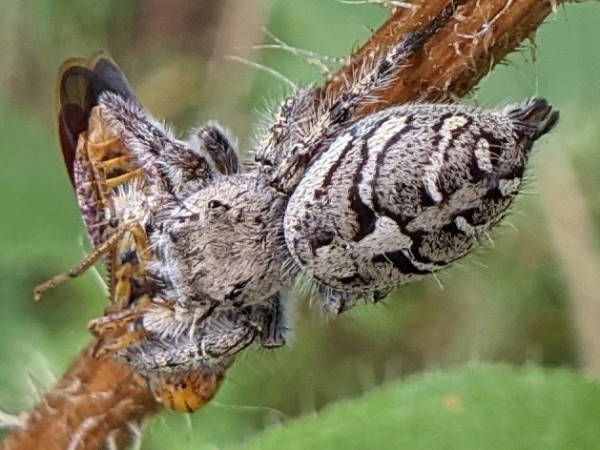 Ranges for other common red-bodied Phidippus get more limited. For example, contrary to the name, the Carolina Jumping spider (Phidippus carolinensis) has a range limited to Texas, Oklahoma, Colorado and New Mexico. The curves on the side are a decent identification clue. The picture shows a female. Males have red in the abdomen. 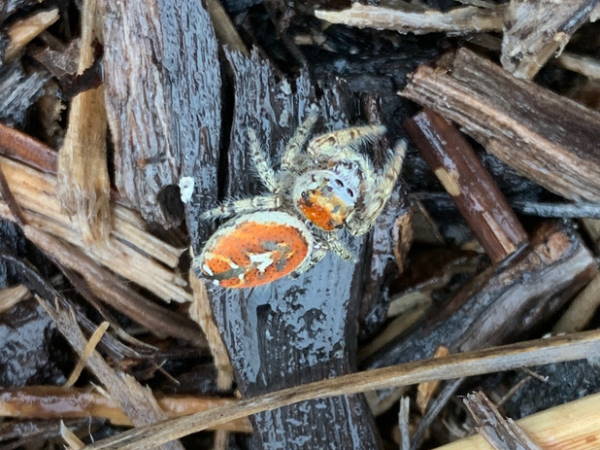 Like the Carolina Jumping spider, the Arizona jumping spider is range limited to Texas, Colorado and New Mexico. They are primarily a woodland species. 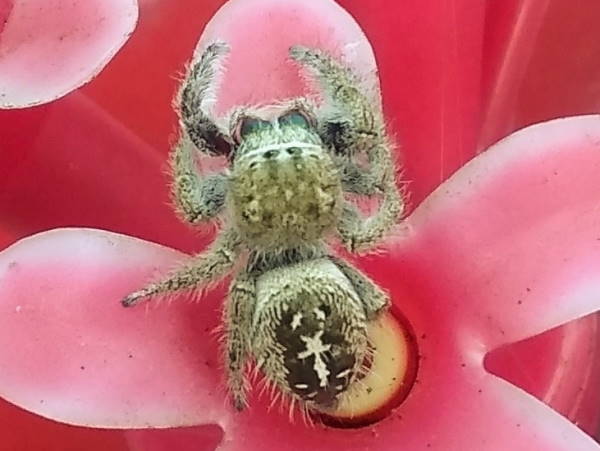 Range for the Texas Jumping spider shrinks even more, to Texas and Oklahoma. The female has a distinct pattern on the abdomen. Males have a red abdomen. 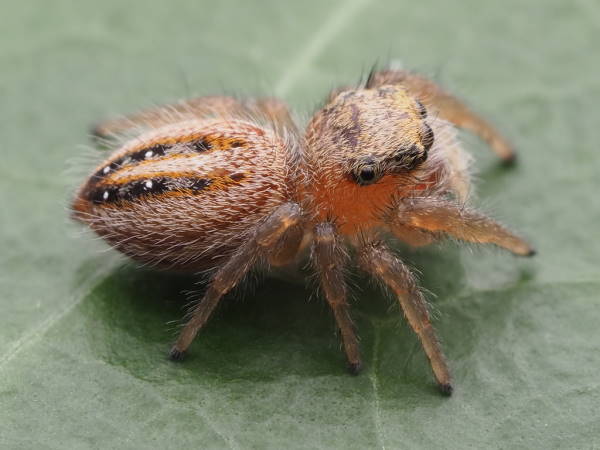 The range for Phidippus pius is a bit scattered around the Midwest and East. Females, like the one in the picture, generally have light colored bodies. 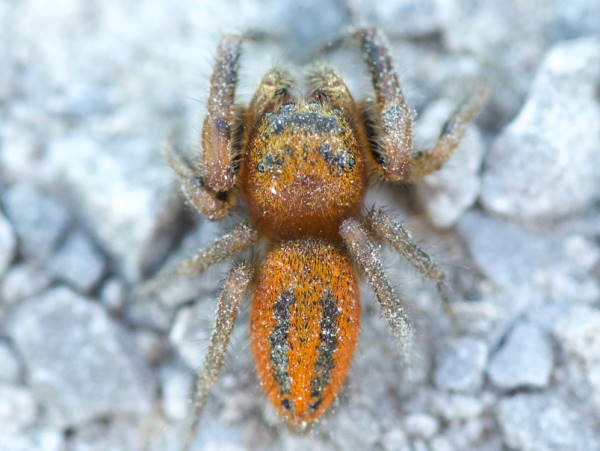 Male Phidippus pius have red bodies with black stripes on the abdomen. 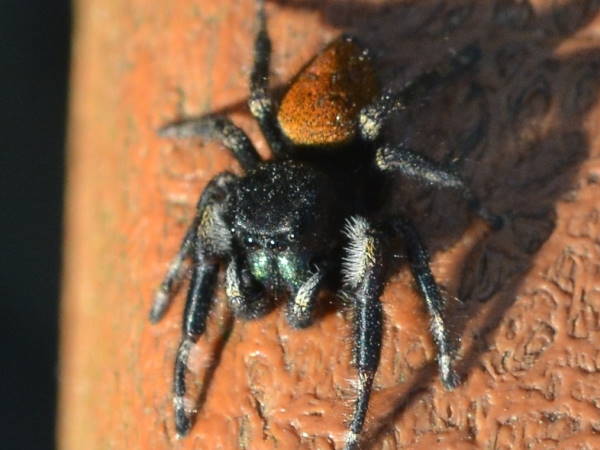 Phidippus princeps, sometimes called the grayish jumper, is a common eastern species. Bugguide lists ten different versions of the species as the males and females move to maturity. This is the mature male. 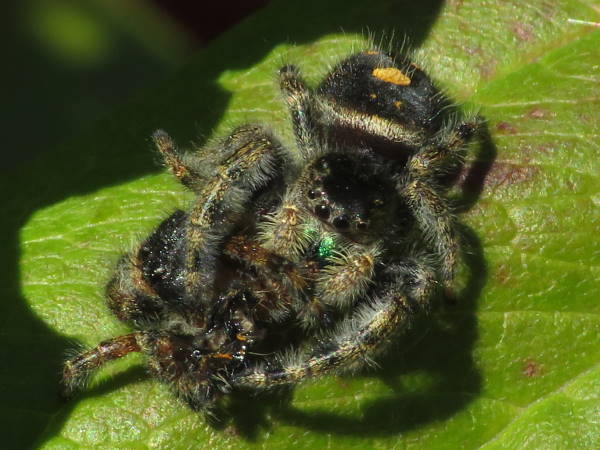 Bold Jumping spiders are probably the most widespread jumping spider species in the United States. In many residential areas they are year round residents that move indoors during the colder weather. 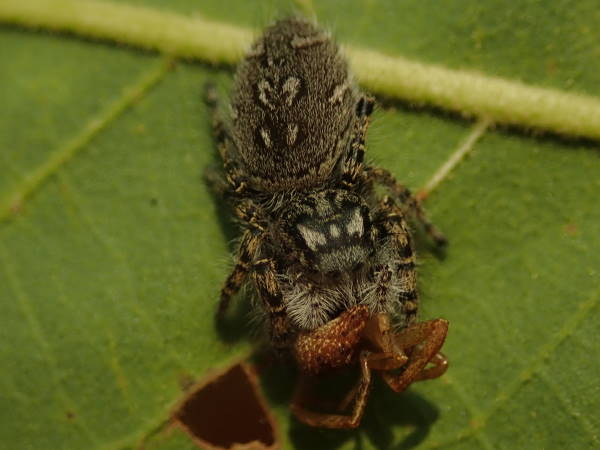 Phidippus mystaceus are an interesting Southeast species with a variety of looks. Some have orange to red legs, perhaps some shade of red on the body. Otherwise, they are not really one of the red bodied Phidippus. The light marks on the top of the head are a good identification clue. 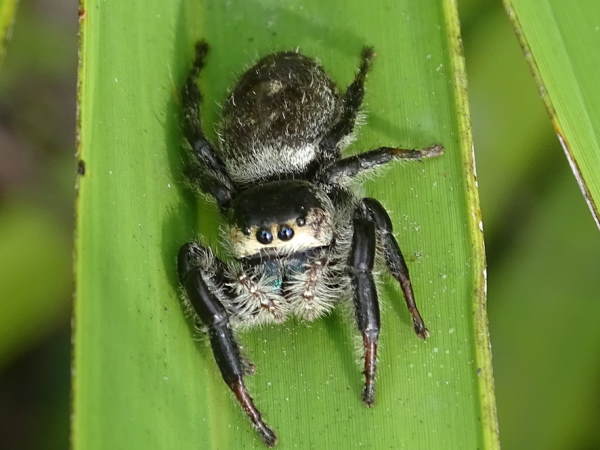 Regal jumping spiders grow to over three-quarters of an inch in length, making them one of the largest jumping spiders. They are a Southeast species with a few different looks. The picture shows a typical female. Males have an orange-red body coloration. 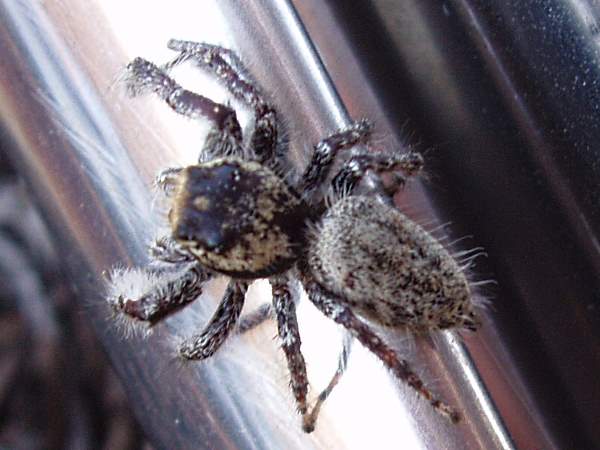 Phiddippus asotus provides an additional demonstration of Phidippus without red in the body. It has no common name and can be found in the Southwest from February through November. 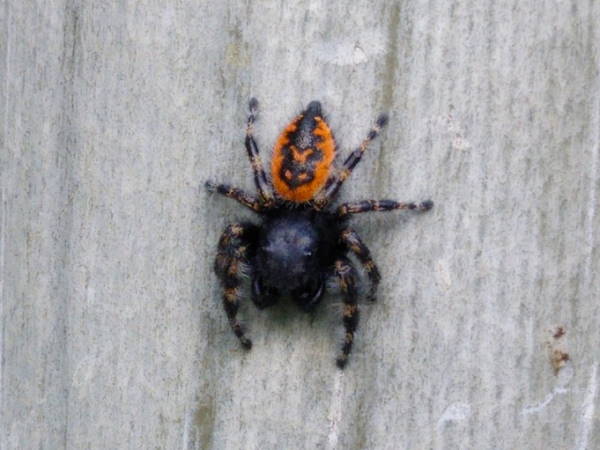 Last but not least, the range for Phidippus borealis is limited to the northern border areas.