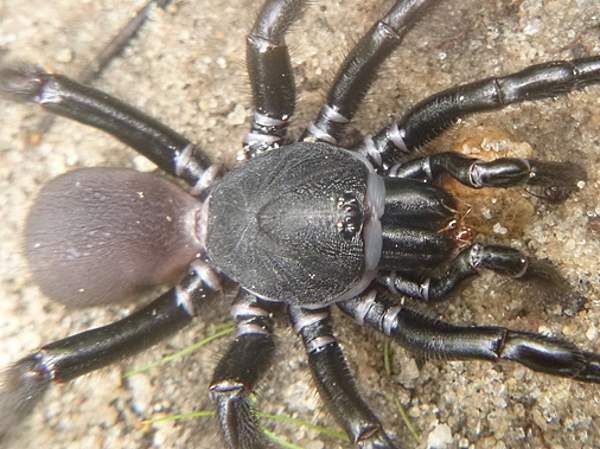 Welcome to Tennessee spiders where there’s more to talk about than the scary media favorites, the Brown Recluse spider and the Widow spiders.

Of course, they are the medically important spiders of the state. Every year brings local news stories of how to stay safe and sane during the season. Listen to the media and fear not. Truth be told, both species are wary of human engagement, and a bit of fore site and attention helps humans also avoid them.

Like most states, information on the number of spiders in Tennessee remains sketchy. One thorough study of spiders in the Smoky Mountain National Park (including Eastern Tennessee) reported on 461 species.

Following general trends for all the United States, the Sheetweb and Dwarf spiders family ranks at the top of the list for most spider species with over one hundred species.

Jumping spiders gets second place with about fifty species, followed by the orb weavers with about forty species.

Many of the common house spiders and lawn and garden spiders, including the orb weavers and jumping spiders receive considerable attention. It’s understandable that people want to know what types of spiders surround them on an almost daily basis.

After all, Tennessee is more that its western mountains. The central and eastern parts of the state experience a fairly mild climate that is suited to outdoor spider living from early spring through late fall.

Before looking at some common spiders, consider the five native Tennessee spiders in the Mygalomorphs group. They are all related to the tarantulas. Together they represent the most interesting of the least seen spiders in the state.

The smallest of them is the Spruce-fir moss spider, one of only a few spider species ever listed according to the terms of the Endangered Species Act. It spends its life in the mountains along the border with North Carolina.

The names of the other species explains the activities for most Mygalomorph species. They dig burrows filled with silk and then extend the silk outward in some manner to trap their prey. So, for example, cork-lid trapdoor spiders create a door with a hinge that the spider can open and shut as it pursues prey.

Like their relatives the tarantulas, they tend to live in burrows year round. Males tend to wander out of the burrow during mating season. Sometimes people can find them in the garden after a heavy rain floods out the burrow, or preparing the soil disturbs the burrow.

The picture at the top of the page shows the Southern Trapdoor Spider (Ummidia audouini). Seeing and photographing one of these spiders is always a grea find for the spider life list.

As an aside, the Tennessee spiders are related to the celebrity spiders not found in the state. Based on the name, can you guess which trapdoor spider species they were named after?

Common house spiders and common lawn and garden spiders around the state fall into both the web spiders and hunting spiders category.

A quick look around the yard shows a handful of the orb weaving throughout the entire spider season. When the morning dew breaks, the sight of funnel webs on the lawn, courtesy of the funnel weaving spiders, gets noticed.

Crab spiders, ground spiders, wolf spiders and jumping spiders all use backyards across Tennessee as the personal hunting grounds.

The following set of spiders pictures covers a representative sample of common house spiders and lawn and garden spiders in Tennessee. Please press the spiders button for additional spider pictures and information. The entire spider guide covers over one hundred different spider species.

In the orb weaving category, spotted orb weavers, writing spiders and all the Araneus species are probably the most common around the yard. Their prominent webs and colorful bodies with distinct patterns make them fairly easy to identify.

Smaller orb weavers, such as trashline orbweavers often go unnoticed except for a small web with what looks like some junk or trash on the web.

Tennessee represents the northern most border for traditionally southern spiders such as the Golden Silk Orbweaver. It does not have a statewide presence.

Woodlouse spiders represent another of the interesting, but not always seen common yard spiders. First, they are unusual in the fact that they belong to the small group of spiders with six eyes. Their stout, hairless bodies grow over one half-inch in length with an additional couple of inches added for the legs.

Indoor shelters help them live for a few years. It also means they can live year round in many locations, although they might not be seen during the winter period.

Their large size and aggressive nature when handled by humans, makes them an imposing species. Fear not, there’s no evidence their bites cause anything other than some localized pain.