Welcome to South Carolina spiders, where the large Carolina Wolf Spider is recognized as the official state spider.

With a body and legs that can measure up to four inches in length, it’s often cited as the largest native wolf spider. It’s in a genus called Hogna and all of the Hogna species are large and can be a bit difficult to identify. Start with body color, usually gray-brown along with a dark stripe down the center of the abdomen. The legs are long and hairy.

Visitors looking for more spider identification help are invited to press the Spider Pics button. It leads to articles covering over one hundred of the most common spider species. 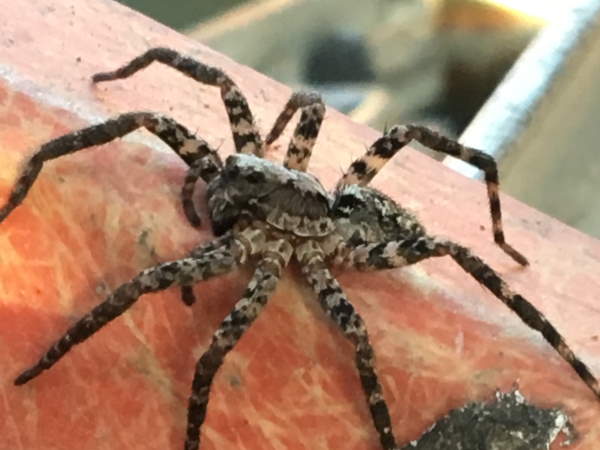 Continuing with the Wolf spiders, numerous species abound in South Carolina, the same as all states. With few exceptions, the large number of Wolf spiders makes for difficult if not impossible field identification absent a good microscope for most species.

Seeing a female carrying an egg sac on the bottom of the abdomen is probably the easiest way to identify a specimen to the family lever. The picture shows a generic wolf spider. Note how the body color tends to be dull to blend into its background settings. 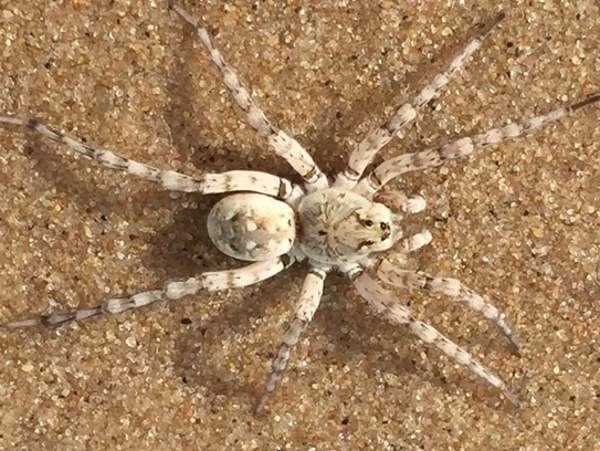 One wolf spider without a common name, Arctosa littoralis might be an exception to the hard to identify rule.

It’s found along shorelines and riverbanks. Notice the circles on the abdomen. That’s rare for wolf spiders. 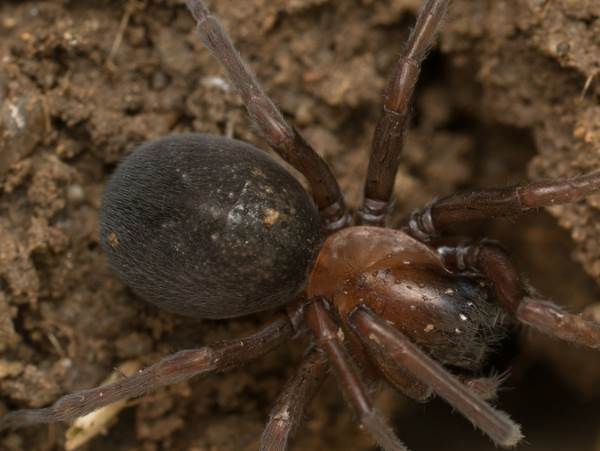 Hacklemesh Weavers are an odd type of spider often found near trees. The picture shows Metaltella simoni. They were first introduced to Florida from South America and spread across the southeast, including South Carolina. 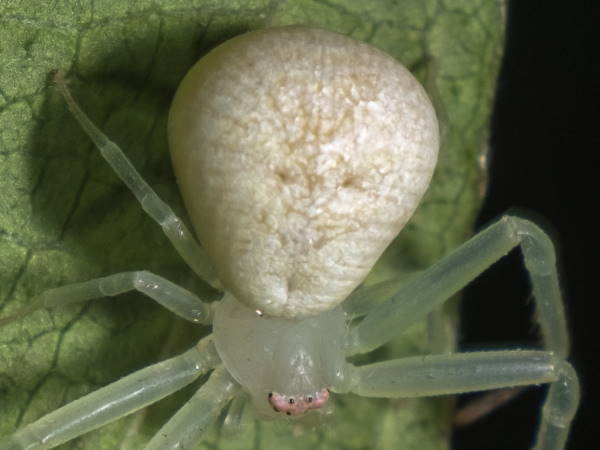 Crab spiders from a few different families often can be found sunning and hunting in South Carolina back yards. Body color is not the best field identification clue for the Crab Spiders in the family Thomisidae.

According to BugGuide, eye pattern helps distinguish between some crab spider species. For example, in the genus Misumena, “All four anterior (front) eyes are about the same size. When viewed from the front, and a little above, it seems all eight eyes are visible and form a crescent shape.”. 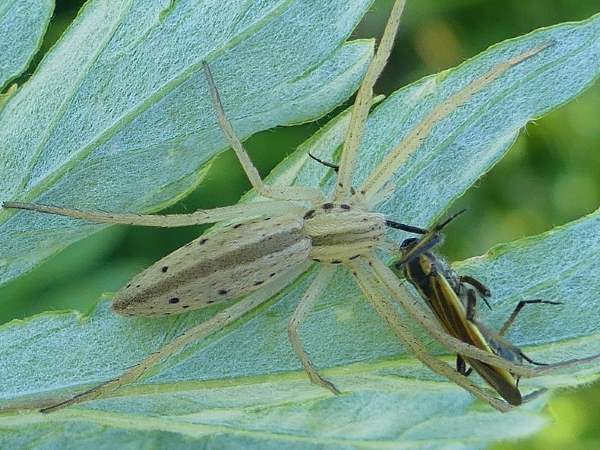 One look at the Oblong Running spider explains the nickname for the members of the Tibellus genus, Slender Crab Spiders. Usually the Oblongus do not have as many black dots along the abdomen as the specimen in the picture. 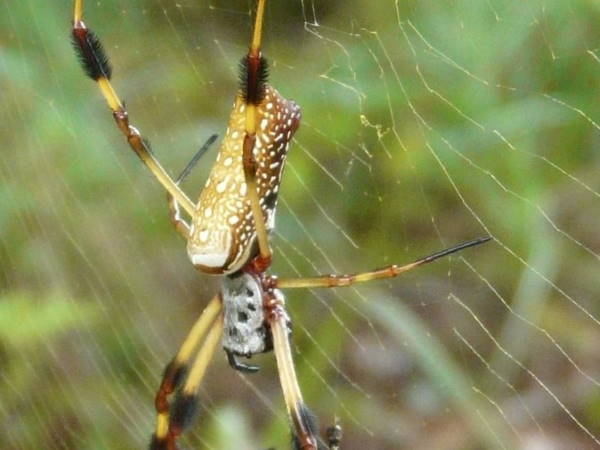 Orbweavers, the spiders that spin flat, round webs can be found most seasons in South Carolina. Some species, especially those in the genus Araneus such as the Marbled Orb Weaver are present from spring through fall. Adults die off and the young overwinter and start the growth process as soon as it warms.

Sometimes winter temperatures are too cold to support some of the sub-tropical species. The picture shows a Golden Silk Orbweaver, the spider with the largest orb web in the United States. In some of South Carolina’s warmer areas, it’s been a steady resident.

According to employees of Congaree National Park, a changing climate and warmer inland temperatures mean that the spider has established permanent residence at the park.

Wooded and forest habitats are a favorite web building environment. Care on trails is suggested to avoid a face full of spider web. 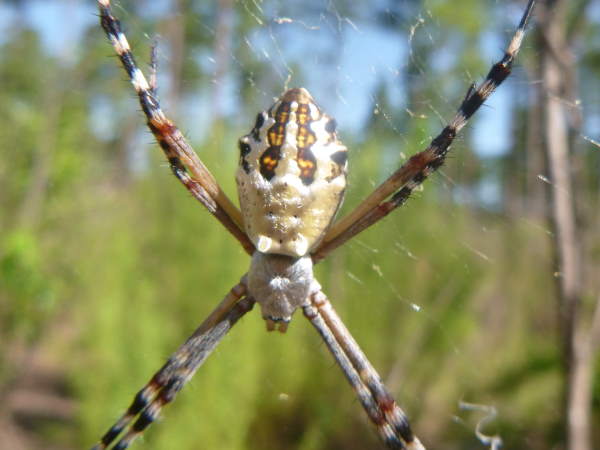 ARgiope orb weavers such as the Yellow Garden Spider (Argiope aurantia) are common throughout the state. Less well known is the fact that the Florida garden spider (Argiope florida) also can be found in the state. 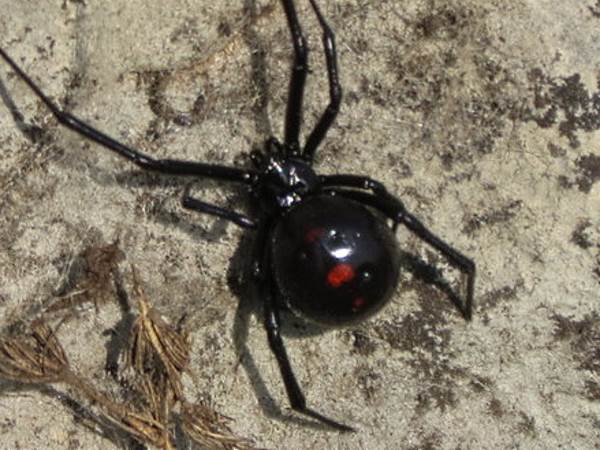 Two black widow spiders live in South Carolina. Only the bites of females is considered dangerous.

Black widow spider identification normally begins with the red hour glass marking on the ventral side of the abdomen. Sometimes the top of the abdomen for the female Northern black widow has a red mark or pattern.

Keeping an eye out for the spiders around the yard is a matter of looking for messy cobwebs near stationary objects such as wood piles, the corner of sheds, etc.al.

They noted that the Brown Recluse range is limited to the western edges of the state.