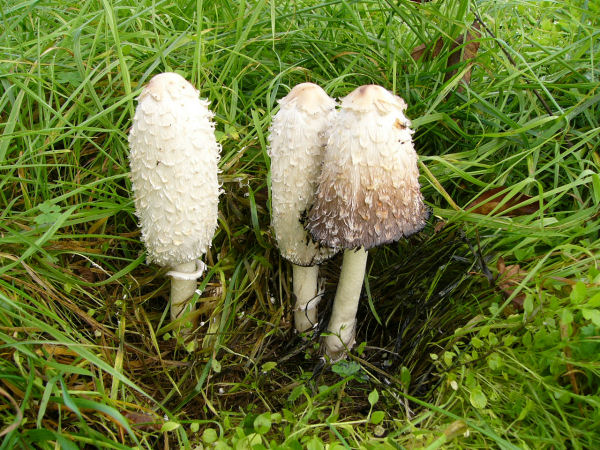 Mushrooms, the fruit of fungi that lives in soil every continue to fascinate people. Whether it’s identifying the mushrooms like the inky cap, that tend to pop up in the yard from time to time, or for picking the cream of the crop wild mushrooms to try out in a new recipe, questions about the types of mushrooms growing wild continue to be popular.

Any mushroom identification guide necessarily starts with a precaution. Many wild mushrooms are toxic and consuming wild mushroom pose potentially severe medical problems. The old adage, when in doubt throw it out, applies to mushroom hunters. 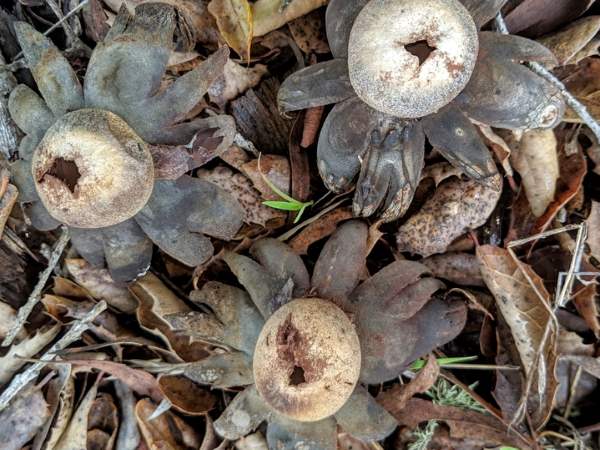 The introduction to mushroom identification needs a bit of clarification. Mushroom typology continues to change. Often mushroom families don’t physically look like they belong together in a larger order.

The Earthstar Mushrooms in the picture, for example, belong to an order that includes the mushrooms with pores. 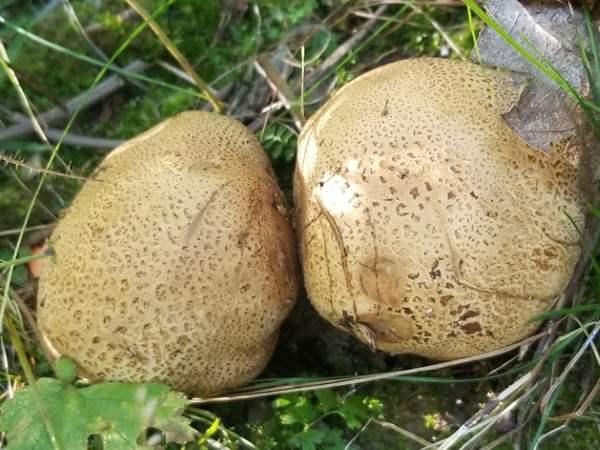 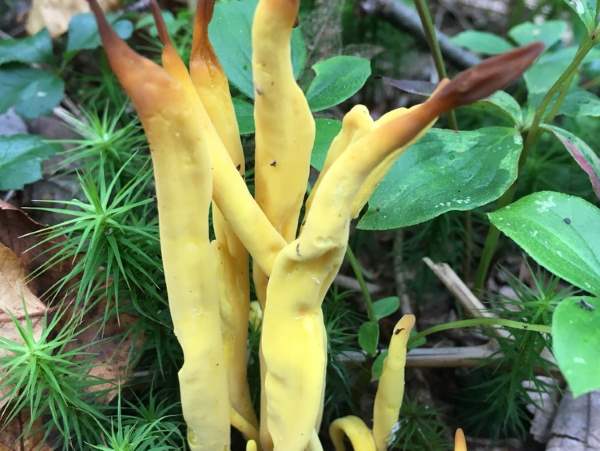 Golden Spindles, a coral or club mushroom belong to the order that contains the gilled mushrooms. Of course, there are no gills on this group.

At most, the introduction to mushroom identification intends to demonstrate the existence of hundreds of species that might be easy to identify using a few physical characteristics of the mushroom in question. 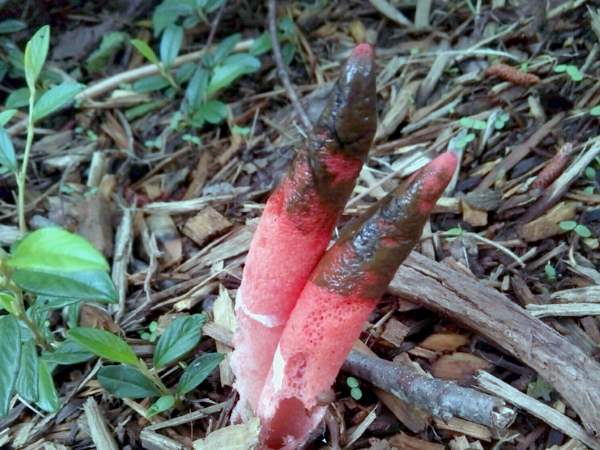 Along with the typical lawn mushrooms, city and suburban residents can think stinkhorn as part of their mushroom education.

Take a look around the lawn and garden, especially around mulch and woodchips, and, well, the odor does the rest. Generally speaking, these mushrooms or fungus are not poisonous or harmful. They just have a very, very, very unpleasant odor. The foul odor attracts flies and helps spread the spores.

Here’s a brief rundown of five common stinkhorn mushrooms that show up, usually during the fall.

You can call the specimen in the first picture the Elegant Stinkhorn or the Devil’s Dipstick, depending on your disposition. 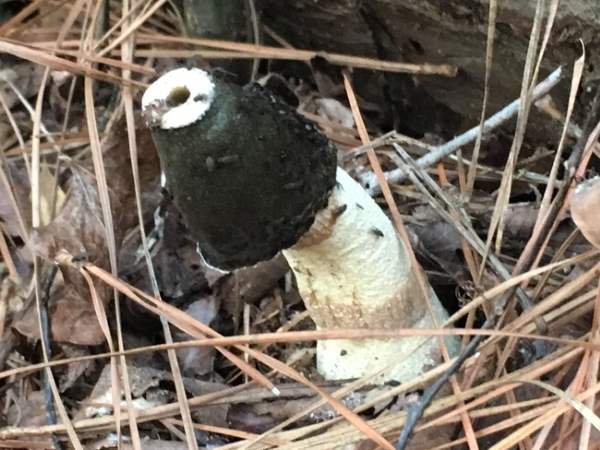 Ravenel’s Stinkhorn can also show up in the same lawns and gardens in most areas East of the Rocky Mountains.

Same foul smell, different genera and the white color of the stem. 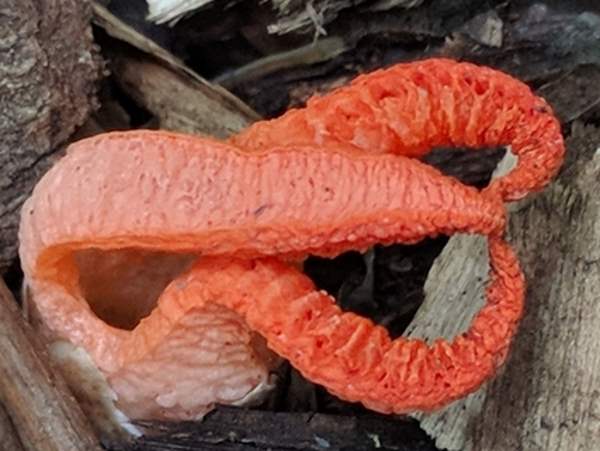 The following four stinkhorns have an orange to red color and a slightly different structure. They represent three different stinkhorn genera.

Up first, the Stinky Squid. 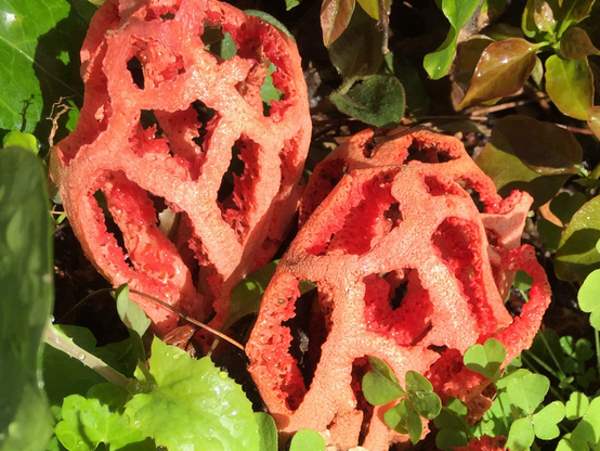 The Lattice or Red-caged Stinkhorn also pops up in many Eastern gardens. 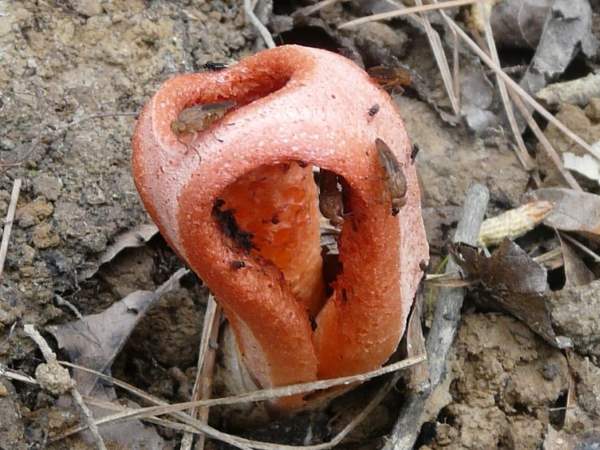 The Column Stinkhorn belongs to the same genus as the Lattice Stinkhorn. It’s range is more restricted to the Gulf Coast States, although it can be found in the Northeast. 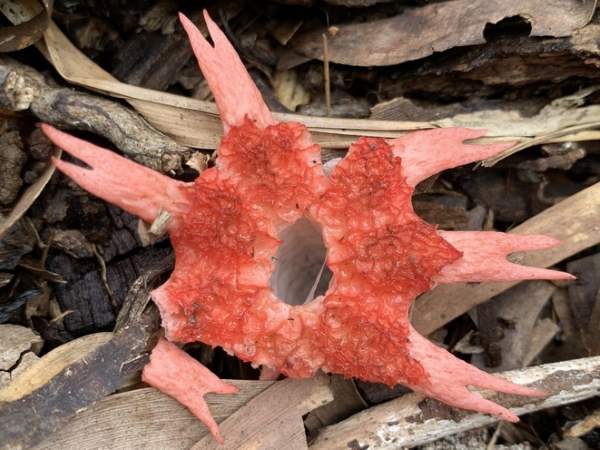 Anemone Stinkhorns look like they can be found in the Intertidal Zone. They actually can be found all around the world in tropical and subtropical climates.

Apart from stinkhorn mushrooms, questions about the types of mushrooms commonly found growing in the lawn also get asked frequently. No one wants their pets or the small children accidentally eating a poisonous mushroom.

Fortunately most of the common lawn mushrooms cause no harm to animals or children. Most are gilled mushrooms, although depending on the landscaping, bolete mushrooms can easily pop up in the lawn if there is a host tree or shrub. Check out the shelf mushrooms section to determine the severity of the problem of finding a shelf mushroom on any tree in the yard.

Even More Kinds of Mushrooms 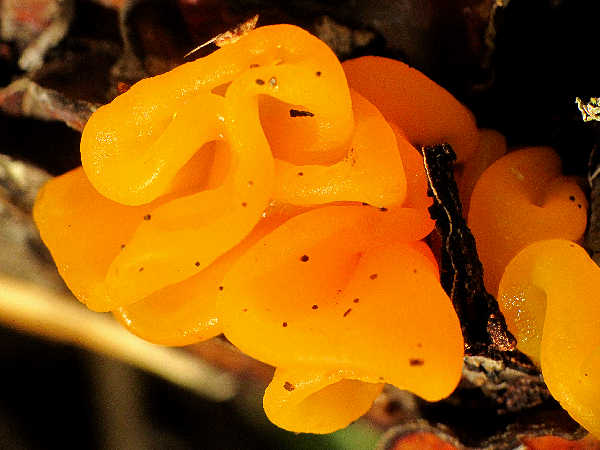 Restricting the types of mushrooms to some basic pore, gilled or shelf mushroom categories does leave a big hole in the mushroom world.

Common names such as puffballs, stink horns and jelly mushrooms all fit into the general mushroom category. They are a fun group of mushrooms to look for while hiking.

Fall hiking, for example, brings out what many might call Halloween mushrooms. The picture at the top of the page for example, shows a jelly fungus that commonly goes by the name Witches Butter. They look like small blogs of orange or yellow jelly that pop up on tree branches. 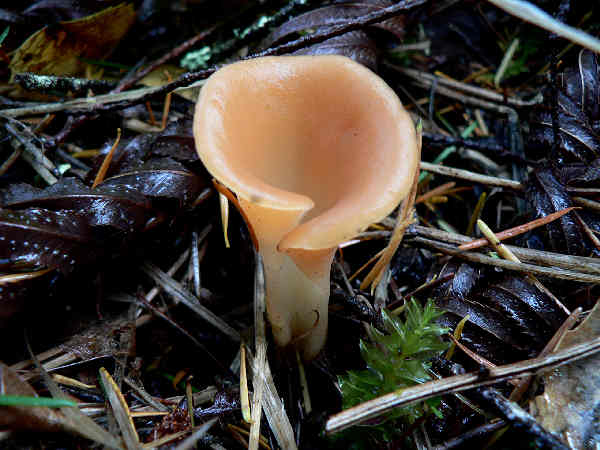 Jelly mushrooms are abundant in many wooded areas of the United States. The Apricot Jelly is fairly common along the West Coast and the Great Lakes area. It might even look like a tongue growing out of the ground with its pink to salmon color. 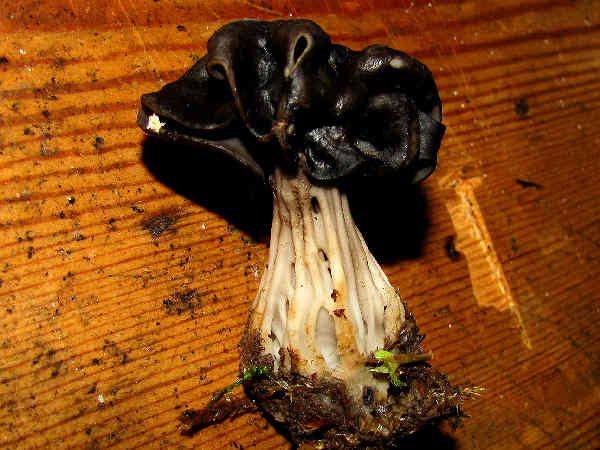 They are common in both the East and West coast wooded areas, including neighborhoods with tree lines streets.

It’s also a great Halloween Mushroom that can be found during the fall season. For those mushroom enthusiasts a tad bit scared of Witches Butter, they can hop on the nearest Elfin Saddle and fly away. 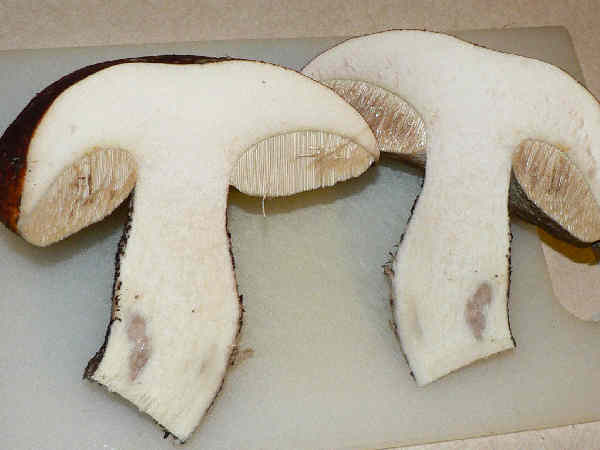 Dried mushrooms are the second best thing to fresh mushrooms. Whether found in fields and forests, or purchased at a local market, most mushrooms have a limited shelf life. Drying mushrooms extends their shelf life.

Of course, not all types of mushrooms are created equal for drying, with many experts recommending morels and some bolete species as the prime candidates for preservation by drying. They are among the few mushroom genera that retain their flavor and texture when dried and reconstituted.

The picture shows a bolete mushroom cut in half with the pores removed. The flesh is white except for a bruise on the lower part of the stem.

If the mushroom has worm holes and decaying flesh the mushroom is well past its prime. Mycologists generally warn against eating any blue staining bolete species. A field check for bluing is easy and is accomplished by ruing a thin object across the pores. Breaking off a piece of the cap also promotes bluing.

With mushrooms in hand, the actual drying process begins with preparing the mushroom. Preparation initially involves cleaning the mushrooms. Using a clean cloth to remove excess dirt, and where applicable pores, from the mushroom usually completes the cleaning process. Mushrooms tend to absorb water, so experts recommend against soaking them in water for cleaning purposes.

After the mushrooms are cleaned they can be sliced to a uniform size, often about an inch in length, and placed on the trays of a conventional dehydrator. Set the dehydrator at a low temperature, no higher than 120o, for approximately six hours. Higher drying temperatures tend to cook rather than merely dry mushrooms. When the mushroom pieces completely dry, they look leathery. Placed in an air tight container, expect the dried mushrooms to have two year shelf life two year shelf life.