Welcome to Maine spiders where most of the interest comes from people seeking spider identification help based on species found in the home or garden. By way of introduction, there’s good news and bad news for individuals interested in Maine spider identification, depending on the circumstances. Spider enthusiasts will be happy to discover that researchers in Maine recently published a checklist of spiders. They found, “This checklist includes the names of 677 species of spiders found in Maine. These species are in 250 genera and 33 families. Species richness per family ranges widely, with the Linyphiidae first (228), the Salticidae second (58) and the Theridiidae third (57). Twelve families are represented by a single species. 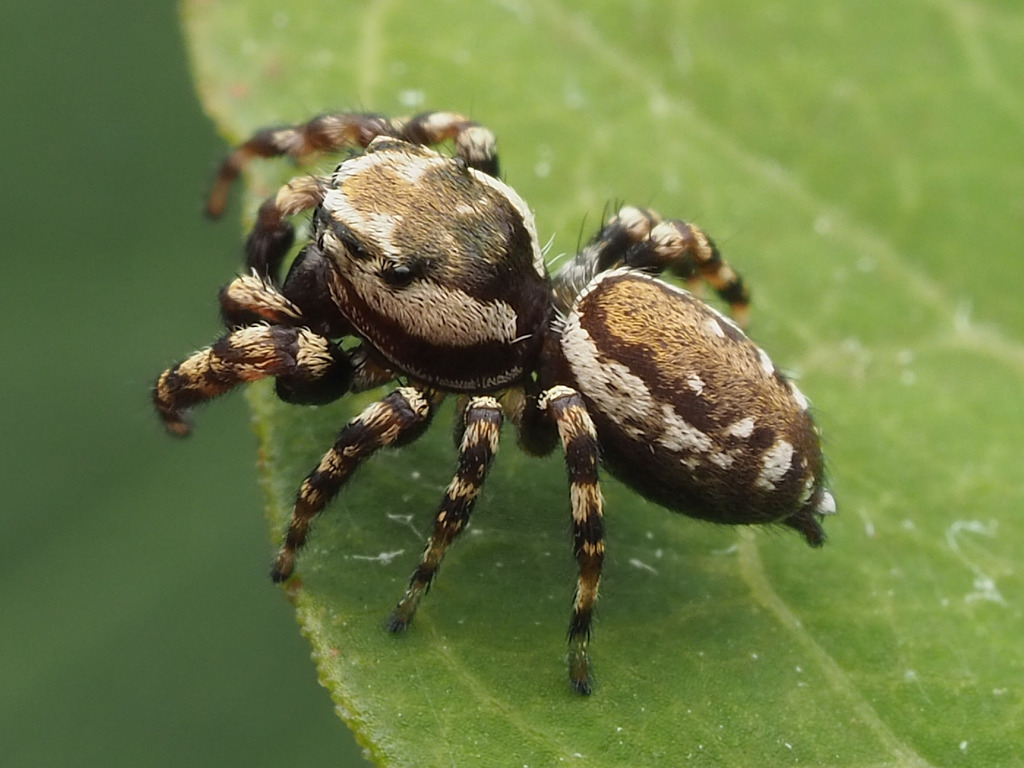 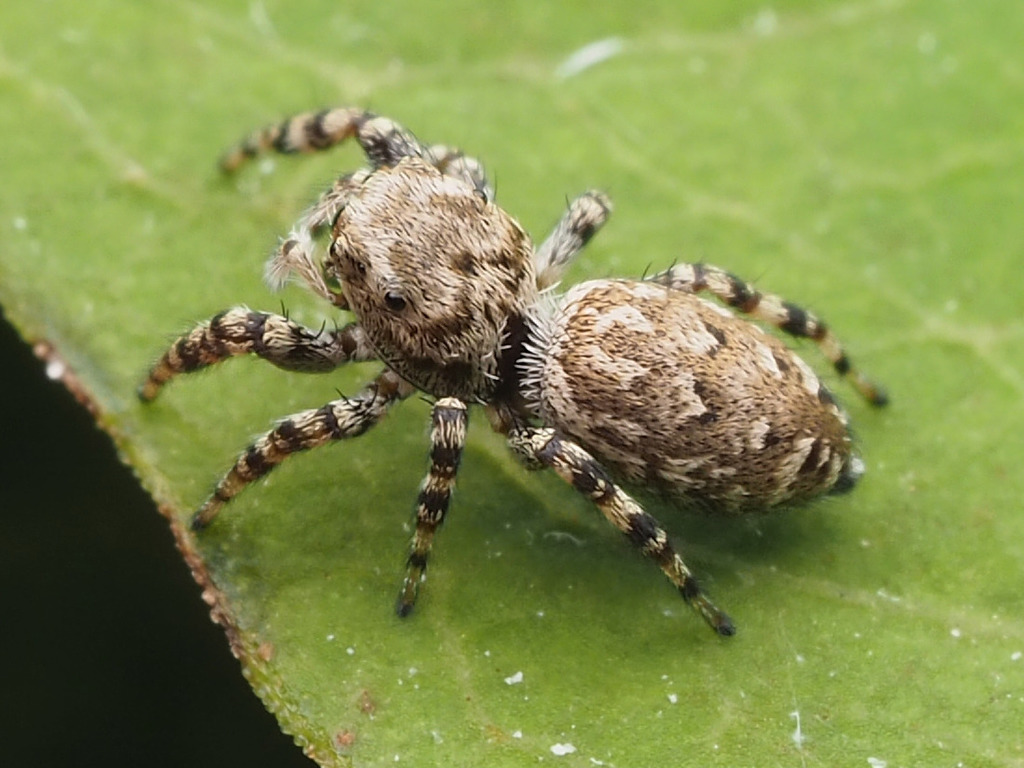 The findings are closely alligned with other state checklists. The Linphiidae or Sheetweb and Dwarf spiders rank as the most diverse and unseen spiders in all states. Their webs across bushes and shrubs, however, often get noticed. Salticidae, the Jumping Spiders, are easily recognized because of the presence in back yards across the state. The large number of species can be difficult to identify due primarily because males and females often look different. The two pictures show a male and female Peppered Jumping spider (Pelegrina galathea). Look for them at the height of summer. 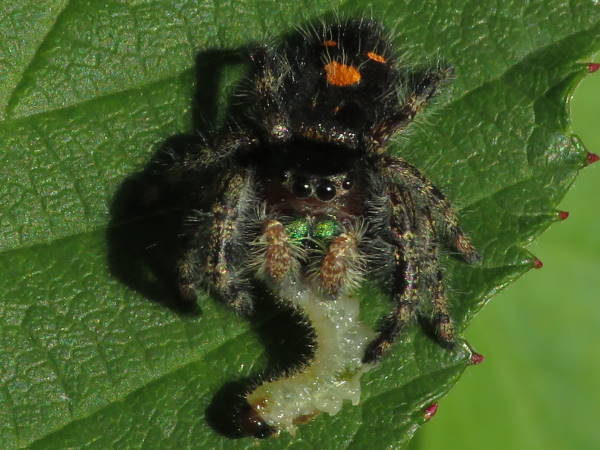 Bold jumping spiders might be the most common of the Phidippus species in the state. The spider is characterized by the stark black body with white spots on the abdomen. Juveniles like the one in the picture start off with orange to red spots. All the the jumping spiders with red in the abdomens and sometimes head, also belong to the Phidippus genus. The presence of green jaws is a very good first field identifiction clue for species inthe genus. 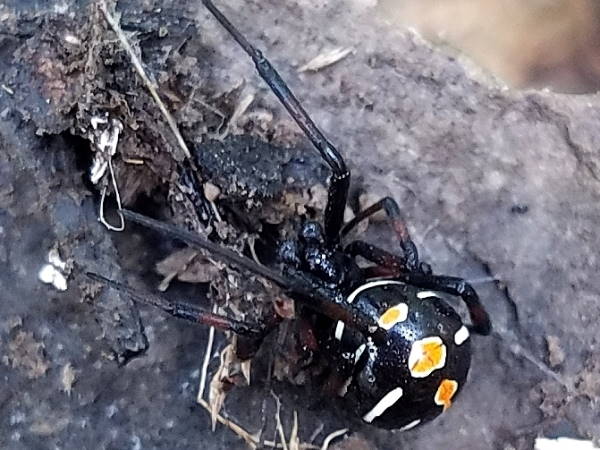 Most people associate the Theridiidae or cobweb spiders with the widow spiders. According to the University of Maine extension service, there’s little need to worry. The Northern Black Widow might have a limited presence in the state, however, the cold winters keep it from establishing a significant population. Occasional sighting of other widows such as the Southern Black Widow or Brown widow happen because of interstate commerce. Most people recognize the black widow by the presence of the red hour glass on the underside of an otherwise black body. Males and juveniles have a pattern on the top of the abdomen like the specimen in the picture. Only the females get classified as spiders of medical importance. 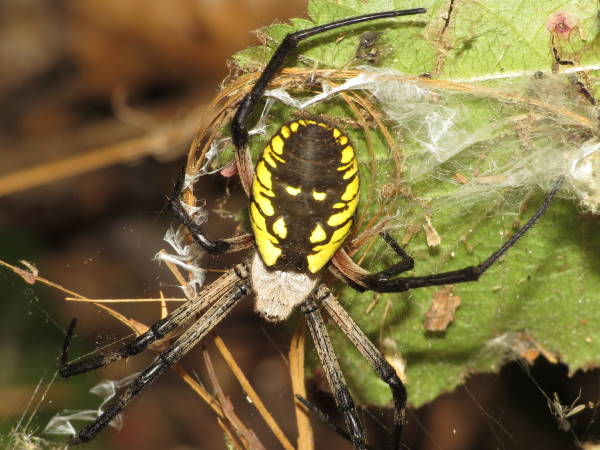 For spider enthusiasts, the good news is that the comprehensive nature of the checklist means it’s fairly easy to take pictures and identify some of the most common and noticed spiders found in residential areas. The video at the top of the page, for example, shows an Cross orb weaver building a web. Common orb weavers, for example, usually do not show up in back yard gardens until June or July. They could be gone by September or October.Like most places in the east, writing spiders, spotted orbweavers and Araneus spiders tend to be the dominant orb weaving species in many suburban backyards as well as being easy to identify. The picture shows the very common Yellow Garden Spider. They are large and harmless. 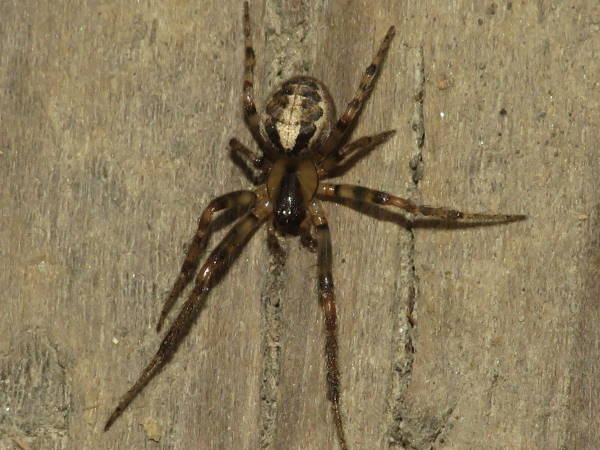 In fact, fifty species of orb weavers have been identified, literally covering the alphabet from A to Z. The picture shows Zygiella x-notata.

The same pattern holds for smaller hunting spiders such as the colorful flower Crab Spiders. They can show up on flowers in the back yard during May. By September most are gone. With few exceptions, all Maine spiders ought to be treated with more respect. They are beneficial insects that spend their limited number of days in the state ridding the population of excess insect pests.

Cold weather tends to make for many Maine spiders to turn into house spiders. Common house spiders such as cellar spiders and cobweb spiders can be found year round. Other species such as grass spiders and jumping spiders may wander into the home during the late summer and early fall.

Maine Spiders in the House 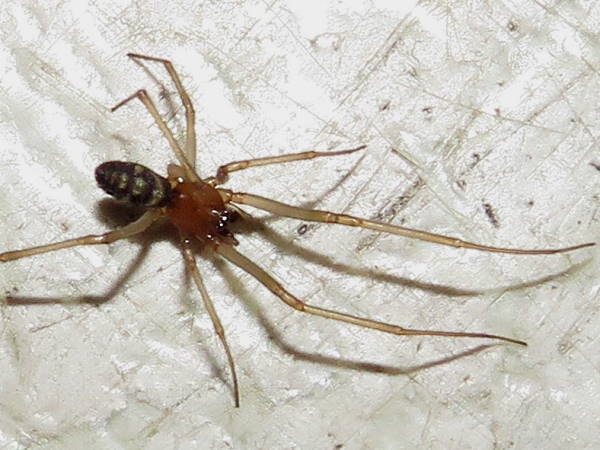 A handful of common house spiders belong to the cobweb spiders category. The Triangulate House Spider and the Common House spider (Parasteatoda-tepidariorum) represent two cobweb spider species that rank as two of the most common Maine house spiders.

A couple of additional Stedota species go by the name False Widow spiders (pictured) and they often wander indoors. While their bodies have dark colors, they lack the hourglass pattern of the true widow spiders. 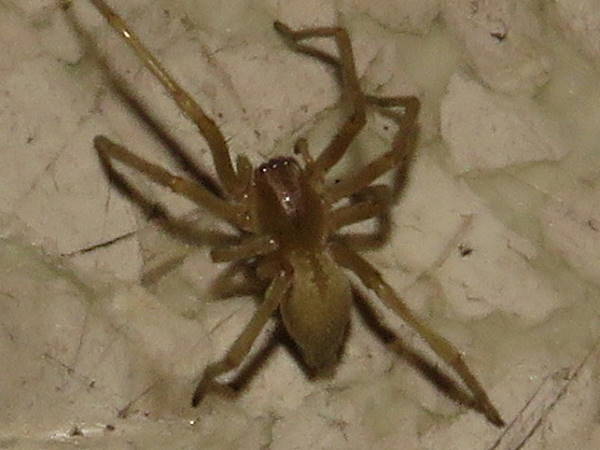 Sac spiders get their name from the fact they spin small silken sacs to live in. While they are outdoors spiders, during the colder weather they wander indoors. The Yellow Sac Spider in the picture is known for a stinging bite, but there’s little medical evidence that it causes serious medical concern for anyone other than those alreaedy sensative to any type of insect bite. 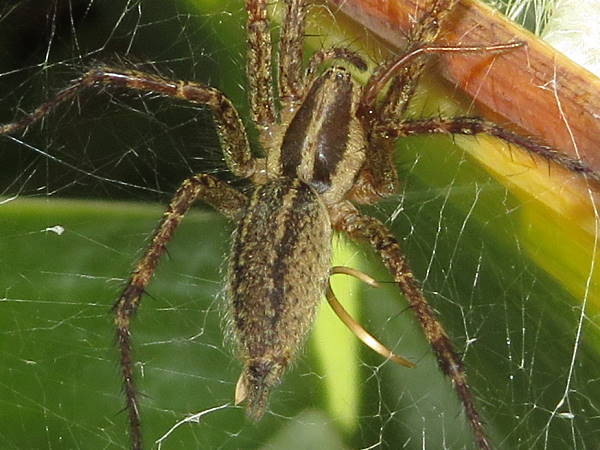 Grass spiders also known as funnel weavers, often wander inside the house. Outside the house, early morning dew often brings out their funnel webs in the yard.

Over one hundred species have been documented, most with a limited, regional range. Most species also look very similar with thin, striped brown bodies. The long spinnerets at the end of the abdomen help differentiate them from the wolf spiders.

As mentioned above, Maine’s Crab spiders usually tend to the flowers around the house rather than wandering indoors. Three genera of so called flower crab spiders come in a variety of colors. Body color is often white or yellow and stripes on the body are also common. For identification purposes, sometimes body color and patterns are misleading. Eye patterns and body hair are the proper way to identify them. 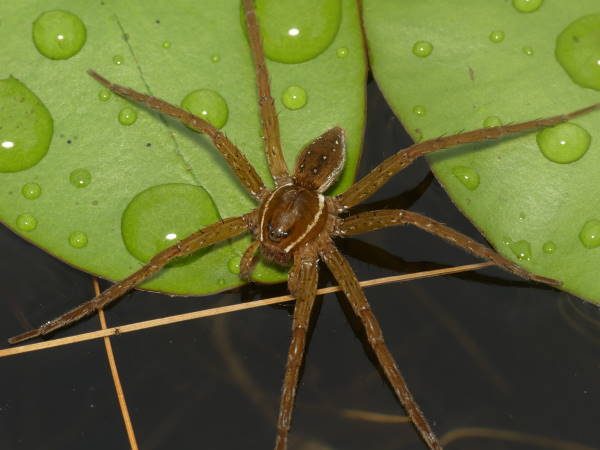 Nursery Web Spiders and Fishing Spiders can also be found near residential areas, although with less frequency than other types of spiders.

Consider them hardy spiders that come out during the spring. Identification starts by recognizing general body pattern, bland color and medium sized. The spots on the abdomen of the Six-spotted fishing spider make it fairly easy to identify.

To the untrained eye, they can look like wolf spiders or grass spiders. The green button to spiders leads to additional spider pictures for interested visitors.