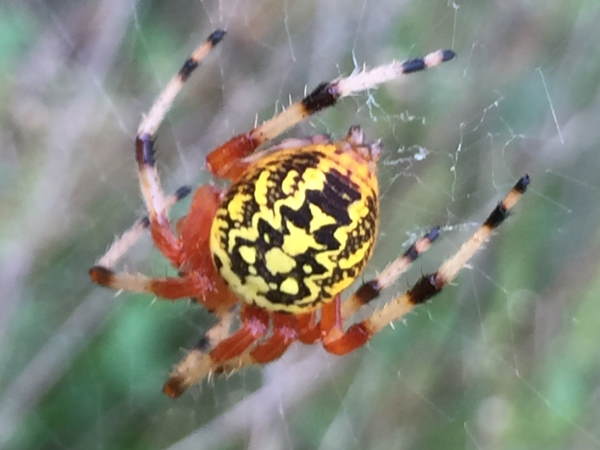 Fortunately for the people of Arkansas, a few people have been interested in the types of spiders in Arkansas for over fifty years. Currently, the 2021, An Updated Checklist of the Spiders (Arachnida: Araneae) of Arkansas serves as the standard. It’s a fairly comprehensive assessment that includes reviewing various past collections from around the state along with ongoing surveys in Arkansas six different physiographic regions:

The authors summarize their findings

A total of 510 species of spiders representing 43 families and 215 genera are herein reported from Arkansas. The most diverse families of state spiders were Salticidae (64 species), Lycosidae (59 species), Araneidae (55 species), and Gnaphosidae (54 species).

In common language the top Arkansas spiders in diversity are:

It’s interesting to note that members of these four families inhabit residential areas throughout the state along with the forest, field and farm studies that historically anchor Arkansas spider surveys.

Another interesting note for the current study confirms that Arkansas spiders shares many spider families and species with its Southeast neighbors.

Orb weavers, a very common residential inhabitant might be the easiest to see and identify because they sit still in their webs waiting to catch prey. Think of the as beneficial because they consume many insect pests. The picture at the top of the page shows the colorful body of the Marbled Orbweaver. It’s one of sixteen different Araneus species documented in the state. 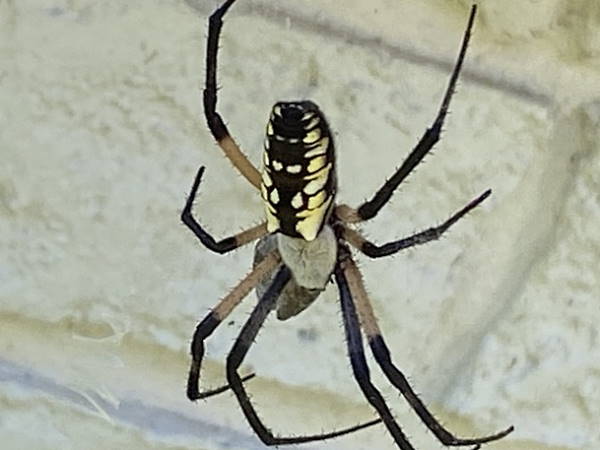 Yellow Garden Spiders (Argiope aurantia ) also rank as common inhabitants of residential areas. They tend to be as large, or larger than the Araneus species. 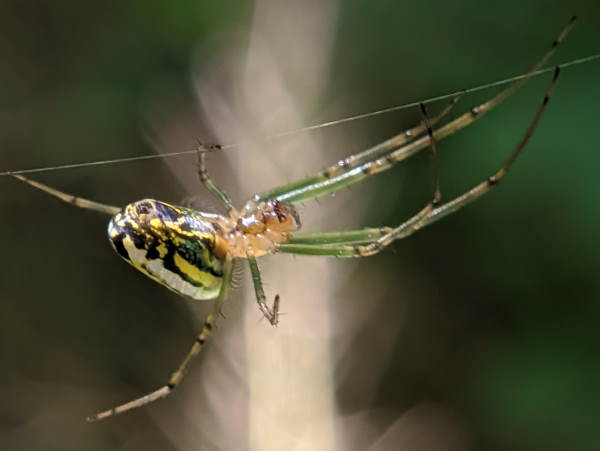 Orchard Orbweavers belong to a different family, the Long-jawed Orbweavers. As they name suggests, they tend to inhabit fields, where they build their webs among tree branches and bushes. 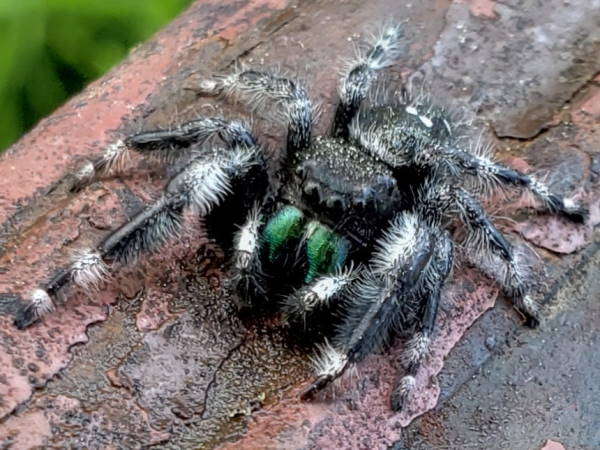 Jumping spiders, the most commonly documented Arkansas spiders can sometimes be tricky to identify, due in part to their size. The dozen Phidippus species tend to grow over one-quarter of an inch in length, making they easily seen when jumping around the shrubs and grass. The picture shows a Bold Jumping spider. The stark black and white color of the male, plus the green chelicerae or fangs, are the best identification clues. 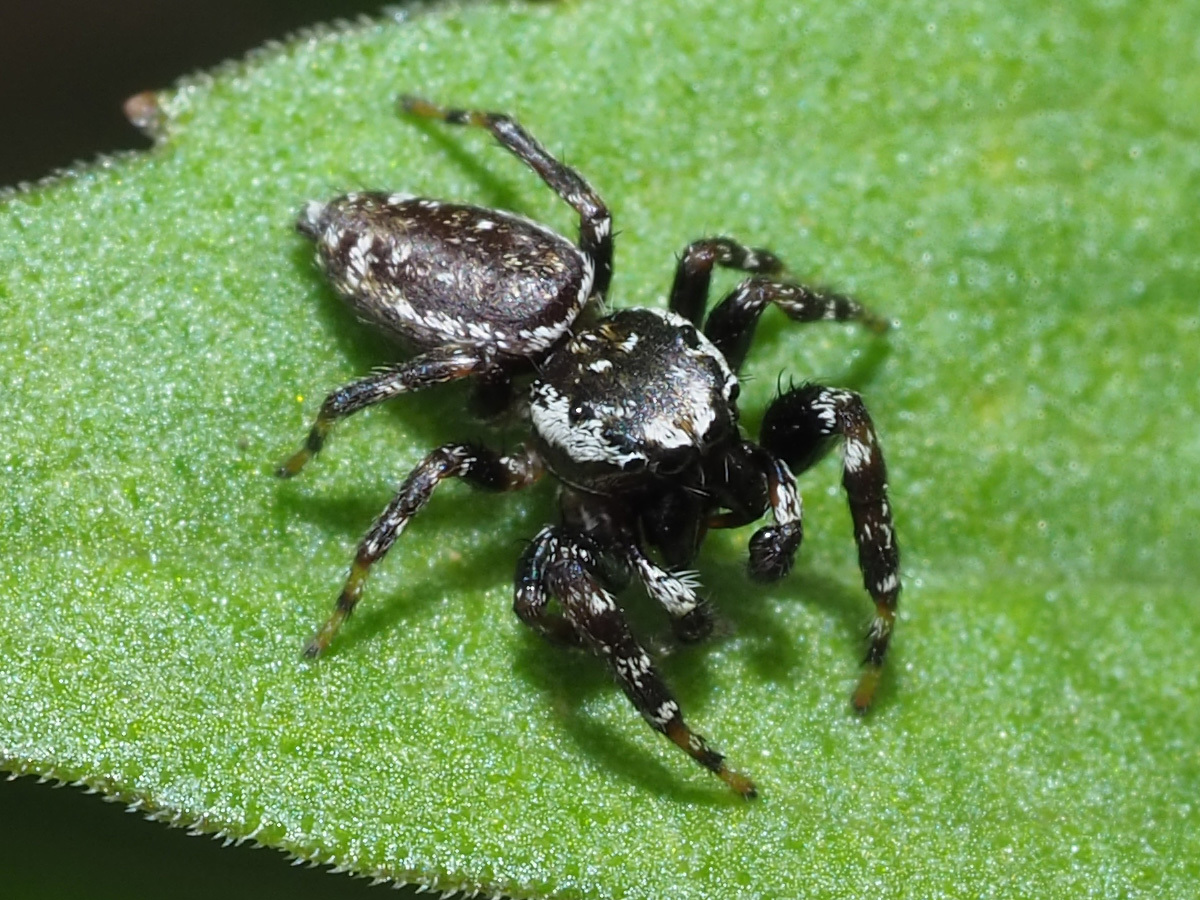 Peppered Jumpers belong to a different jumping spider genus. They are fairly common in residential areas east of the Rocky Mountains. 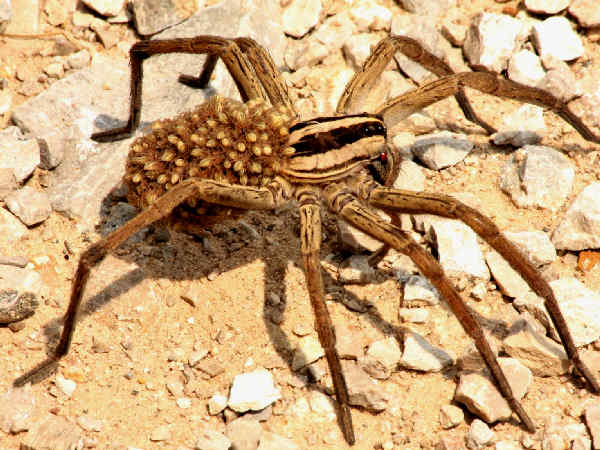 A quick look at some research literature over the past fifty years covering the topic of Arkansas spiders also reveals some interesting facts. Start with a 1964 article, Maternal Care as Exhibited by Wolf Spiders in the Journal of the Arkansas Academy of Science: Vol. 18, Article 6. It reports,

Female spiders were brought into the laboratory and kept in cages so that their activities could be observed. These spiders were Lycosa L. Colinensis Walckenaer, L.helluo Walck., L. punctulata Hentz, rabida Walck., Pardosa sp., P. milvina (Hentz), Schizocosa avida (Walck.). From them we found that maternal care exhibited by wolf spiders is divided into several distinct stages which may be classified as follows: construction, care, and performation of the egg sac; and care of spiderlings after they emerge from the egg sac.

The picture illustrates the fourth stage, the care of the spiderlings. She carries them on the back of her abdomen during their early days.

With few exceptions, wolf spider species can be difficult to identify without a microscopic examination of the body. The largest wolf spiders belong to either the Hogna or Tigrosa genera. Smaller species live in the leaf litter and grass found in residential areas.

Size is another reason that many of Arkansas ground spiders go unnoticed. Species with common names such as ant mimics partially explains the situation. They tend to be small and blend in with other very small insects in the yard. Members of the family tend to share the physical characteristic of having spinnerets visible as the bottom of the abdomen. 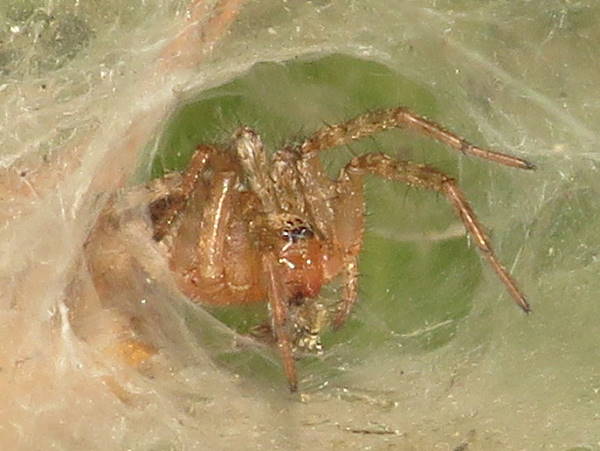 Early morning dew also brings out the home of another common residential spider, the Funnel Weaver, more commonly known as a grass spider. The picture highlights the shape of the web. Sometimes they can wander in the house. Fear not, they are not aggressive or dangerous.

Space limitations mean that the spider pictures need to be placed in a separate section. Please press the green spiders button for additional help with spider identification questions. 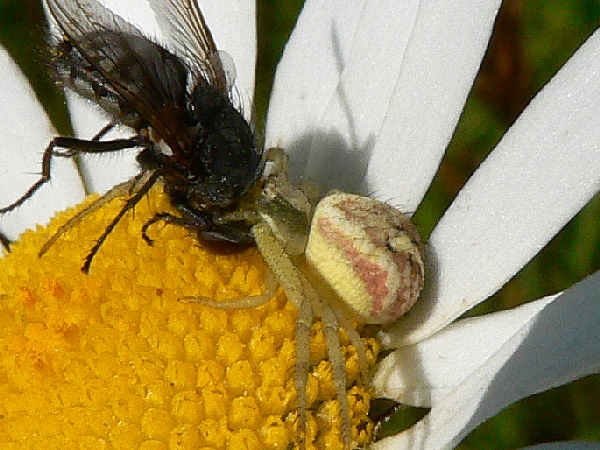 A few different types of spiders go by the common name crab spiders and the two most common, the Thomisidae and Philodromidae (running crab spiders) consists of close to fifty species. That places them among the most common of the backyard spiders.

The colorful bodies of the flower crab spiders tends to draw attention in the garden. The picture shows a very common garden spider. It’s a crab spider in the genus Mecaphesa. There are four similar genera of crab spiders that can be found on the garden flowers in the state. The Mecaphesa can be identified by the presence of hairs on the body. 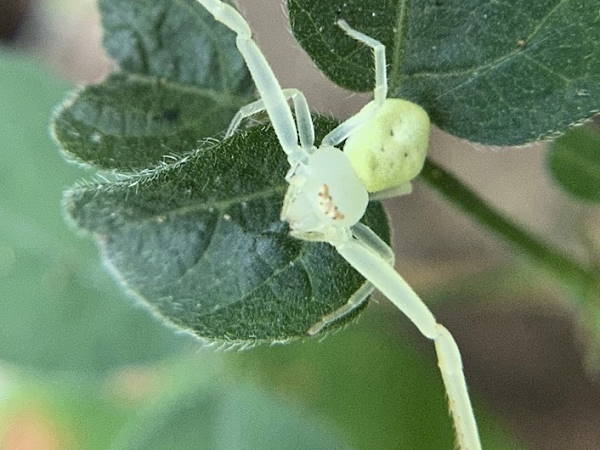 With very few exceptions, the Green Crab Spider (Misumessus oblongus) represents the genus in the United States, and it is found in the eastern part of the United States, including Arkansas. Females can grow to around one-quarter inch in length. Males generally are smaller.

Ground Crab Spiders represents the other half of the Thomisidae crab spider family. Identifying them to the species level presents an even greater challenge than identifying their more colorful relatives. Generally they are a bit smaller in size and share the initial field identification clues of having dull brown bodies. less distinct markings on the body. Experts often suggest using physical characteristics such as leg hairs and body shape as more definitive identification clues than body color and patterns.

Fortunately, finding them is easier than species identification. They tend to inhabit the leaf litter area around the ground and/or around the bark of trees. The large number of species means that different areas can easily host more than one species. 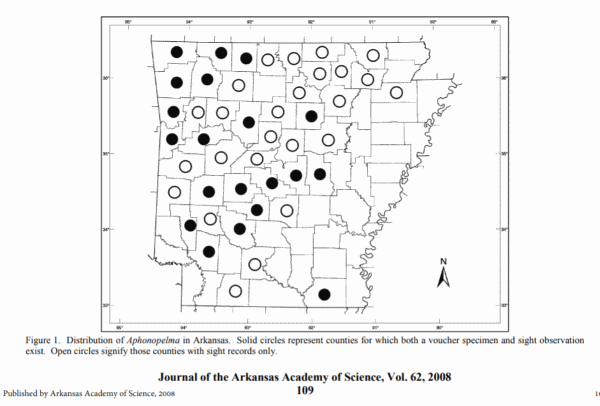 Are there tarantulas in Arkansas? Fast forward fifty years and discover the answer is yes. From the article, Distribution and Taxonomic Status of Tarantulas in Arkansas (Theraphosidae: Aphonopelma) in the Journal of the Arkansas Academy of Science: Vol. 62 , Article 17.

The genus Aphonopelma (Theraphosidae) is marked by a dearth of distributional data and a problematic taxonomy. To develop occurrence information for the genus in Arkansas, I conducted a citizen-science based survey augmented by field work and examination of museum collections. Results of these efforts yielded a significant amount of data that enabled the construction of a county level map of Aphonopelma distribution in Arkansas; a resource hitherto unavailable. Three Aphonopelma species have been described as occurring in Arkansas: A. baergi, A. hentzi, and A. odelli. 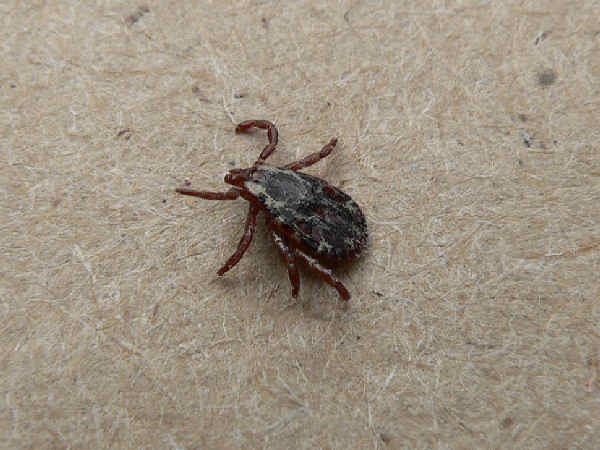 Extending the research on Arkansas spiders to the broader Arachnid class includes the ticks. Arkansas also covers ticks and discover that ticks literally cover many parts of Arkansas. From the 2016 article, The Ticks (Arachnida: Acari: Ixodida) of Arkansas in the Journal of the Arkansas Academy of Science: Vol. 70 , Article 25.

We report a total of 3 argasid (soft tick) species and 16 ixodid (hard tick) species from 35 of 75 (47%) counties of Arkansas (Fig. 1). One of these, reported from the species, extirpated from Arkansas, whereas an additional species, been expanding its range into this state.