A back of the envelope calculation finds over twelve thousand types of wasps in the United States, normally grouped into larger super families and families. This particular guide covering those types of wasps does not claim to be an expansive overview. Rather, the focus is on home and garden interests, along with enthusiasm for the natural biological control these wasps bring. The types of wasps usually found around the yard and home often divide into those that cause concern, Vespid wasps, and the beneficial wasps. The six groups of wasps listed on the buttons below are presented in much greater detail. Press a link to learn more or scroll down the page to get an overview of the most common types of wasps found around the neighborhood.

Fortunately only a small percentage of wasps, primarily the Vespid wasps pose any concern to humans because of their habit of building nests in residential areas and their tendency to sting (multiple times) as a defensive mechanism, when their nests are threatened.

The video shows on particularly aggressive wasp, the Bald-faced Hornet, part of the yellowjacket family. They build aerial nests in an oval shape and agressively defend it. During colder weather, they tend to slow down and nectar on flowers. 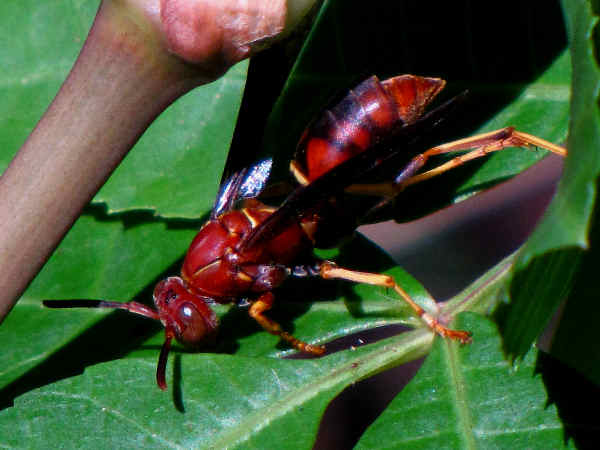 The standard Polistes story posits them as semi-eusocial insects, whose nests are built on a annual basis and tended by a queen and workers. The video shows a group of workers getting the nest ready for the season.

Approximately twenty native poliste species, most regionally based, inhabit residential areas, fields and forest across North America. A quick yard check during the warmer moths of the year provides a good opportunity for identifying local poliste species. Preventative measures for dealing with paper wasp nest problems around the house can be as easy as removing the nest from the porch roof as soon as it is spotted. Please press the Paper Wasps button to learn more about the different species. 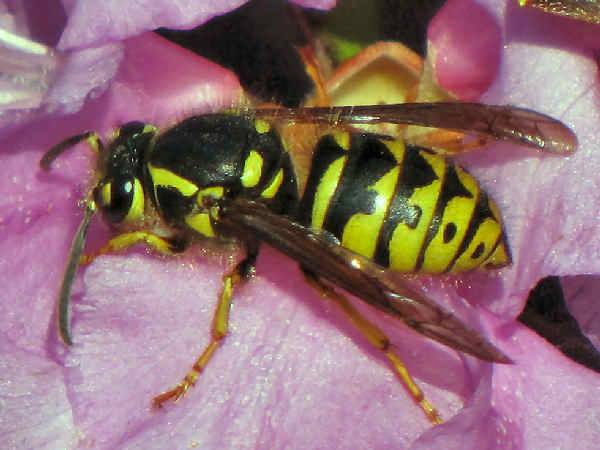 Most people recognize yellow jackets (Paravespula) as the uninvited guests at many picnics.

They are all social wasps that build, and vigorously defend, ground nests or aerial nests. As the colony grows over the course of a summer, the need for food expands. The presence of a sweet tooth partially explains their scavenging ways at picnics and barbecues.

Many homeowners opt to remove them when they nest around the home because their sting is painful. 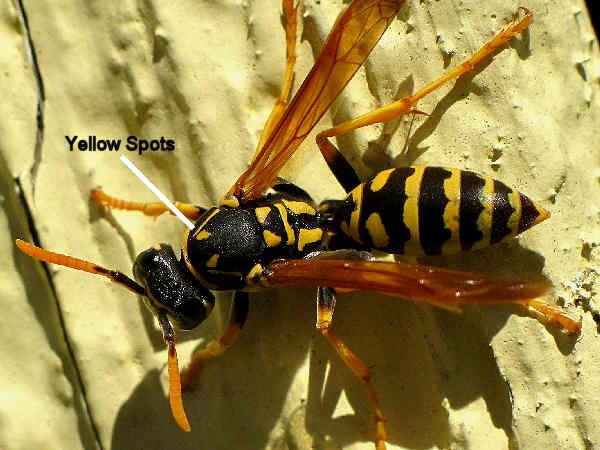 Knowing the difference between yellowjackets and paper wasps around the yard is important because they each build different types of wasp nests. Identifying the proper wasp makes looking for the nest easier. 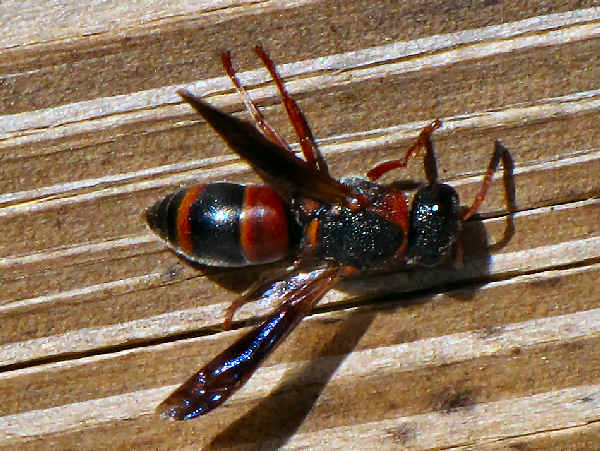 Potter and Mason Wasps (Eumeninae), the most diverse of the five vespid subfamilies, receive their name based on their pot shaped mud nests. The approximately two hundred and fifty North America species get described as solitary, predator wasps and beneficial insects because of their use of caterpillars and other insect larvae as their principle larvae hosts.

Potter wasp appearance varies slightly from genera to genera. Pachodynerus erynnis in the picture is a small, colorful potter wasp species with a range limited mostly to the South East and Gulf Coast states. They have a habit of nest building in wood structures such as benches, fences and sides of houses. 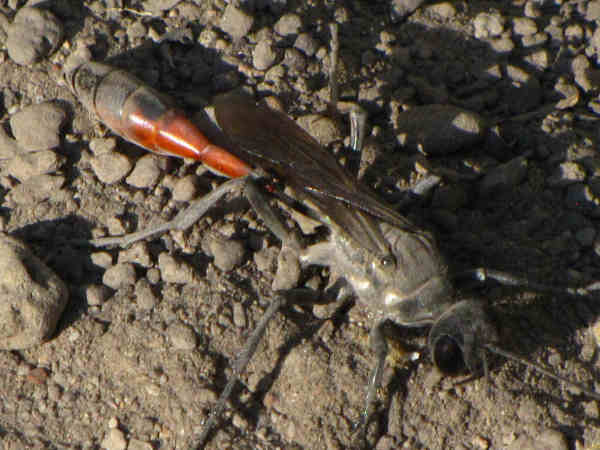 Approximately one hundred and twenty five thread-waisted wasps (Sphecidae) call North America home. Familiar to most people as the long, thin wasps that occupy flower tops during the warmer seasons, their sometimes fragile look masks their predatory nature. Thread-waisted wasps capture and paralyze a variety of insect species and then transport them to their nests as hosts and feed their own larvae.

Fortunately their predatory nature extends only to the insect world. By and large they are solitary wasps that build nests in the ground to rear their young.

The picture highlights the long, skinny body of an Ammophila wasps. Ammophila do not live in their nests and therefore they do not generally cause any problems for homeowners. Most species have variations of red and black color markings on the thorax and abdomen and feet. Please press the Thread-waisted wasps button to learn more about this family.

Even More Types of Wasps 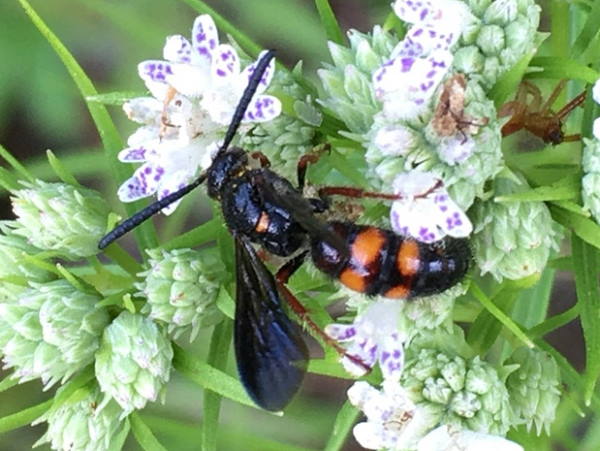 Scoliid wasps, a primarily southern group, share physical characteristics such as colorful spots on the abdomen and/or eye color. Think of them as beneficial wasps because they hunt for beetle grubs in yard from pests such as the June Bug and Japanese Beetle to serve as food for their larvae. Learn about the most common species from coast to coast by pressing the Scoliid Wasps button. 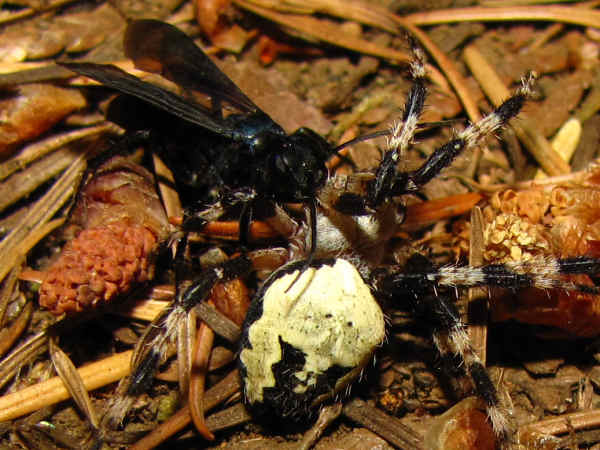 Wasps as insect predators is one story told with every wasp family. Pompilidae, for example, predate on spiders, using their bodies as larval hosts. North American species numbers approach the 150 mark, divided into a dozen and one half genera. The picture at the top of the page shows the end result of a spider wasp chasing down an orb weaving spider.

Spider wasps can also be specialized, as demonstrated by the tarantula hawk. It’s the story of large wasps with painful stings taking on large spiders, in a battle of survival. In this case, the tarantula hawk preys on tarantulas for the purpose of making them their larval hosts. As the state insect of New Mexico, the story of the tarantula hawk gets told on a daily basis. Because wasps can be categorized as pest specialists, agriculture specialists have always invested time trying to understand and leverage their utility as natural biological control agents. 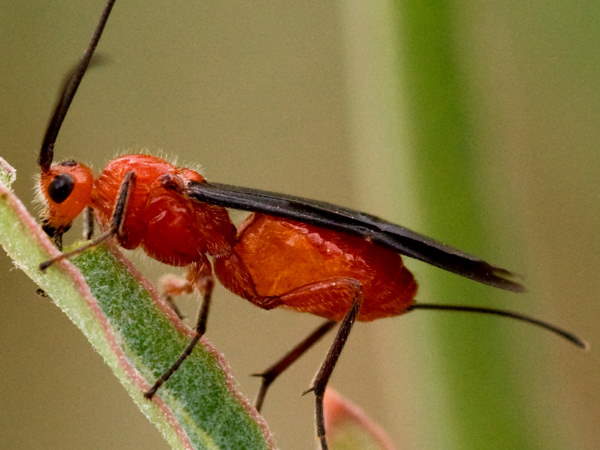 figuratively blanket North America and the ten thousand or so native species guarantees that a handful of species fly around the yard and ground of most residential areas. For individuals not fluent in wasp identification, the large number of species makes it very difficult to identify any one specimen. Nonetheless, species identification of Ichneumon wasps can be very important because some of the species can be used to for pest control purposes. 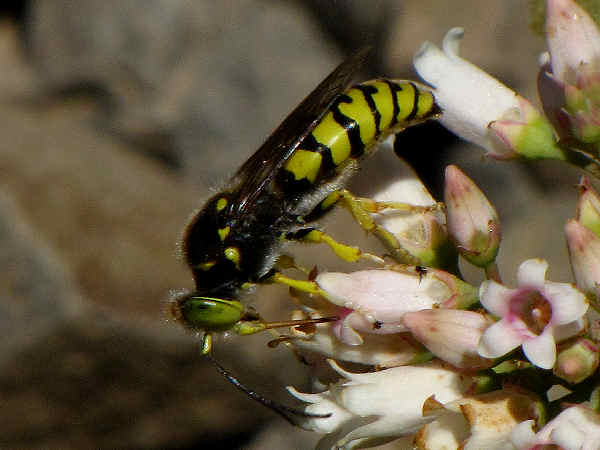 Another common genera in the Crabronidae family, the Bembicinae species with larger eyes also tend to stand out on flowers. 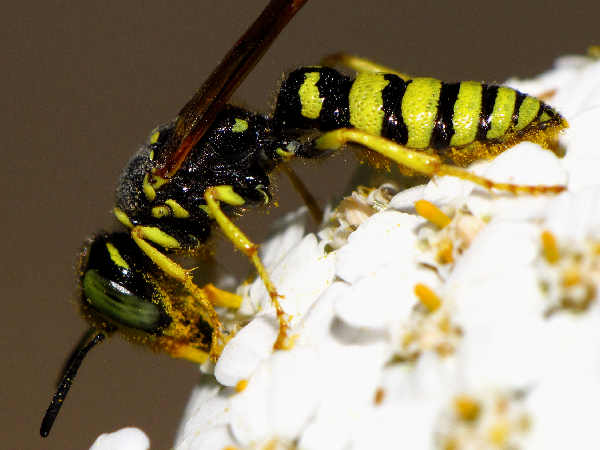 Philanthinae, another large subfamily of Crabronidae wasps consists of species. It’s best known for the Beewolves and Weevil Wasps.

A wasp in sheep’s clothing might be the story of beewolves. Small wasps that resemble bees, their name comes from the fact that they hang around flower gardens waiting to snatch a honeybee or sweat bee from the flowers to serve as its larval host. They are one of the more well known of all the Crabronidae wasps. There are around 30 species in the Genus Philanthus . 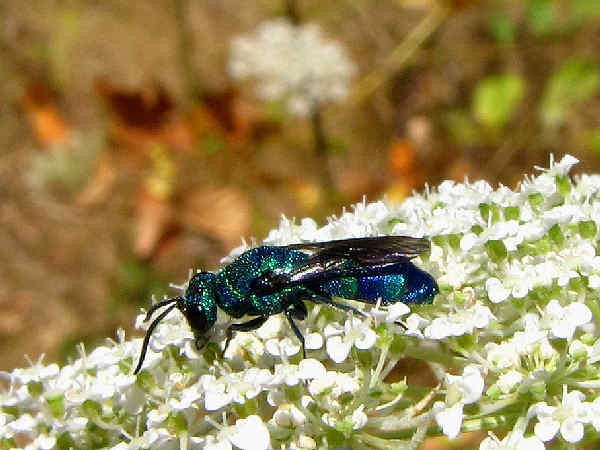 The iridescent blue or green of Cuckoo wasps (Family Chrysididae) helps them stand on atop most flowers. Like other cuckoo species, they are parasitic nesters, laying their eggs in another wasp’s nest. Cuckoo wasps have a continent wide presence. 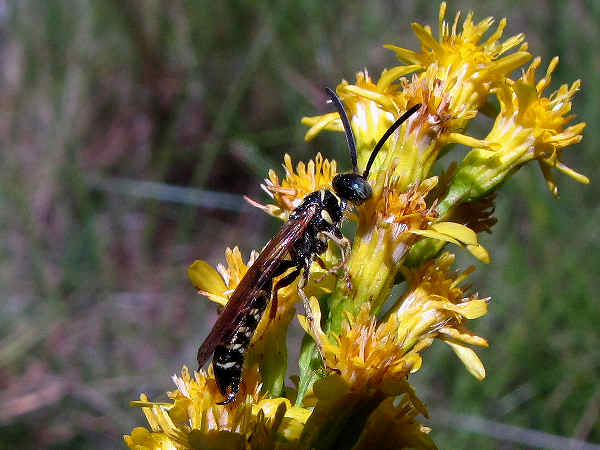 Another family of flower wasps, Tiphiid Wasps, can be identified by thin, long bodies and a hooked appendage at the end of the abdomen.