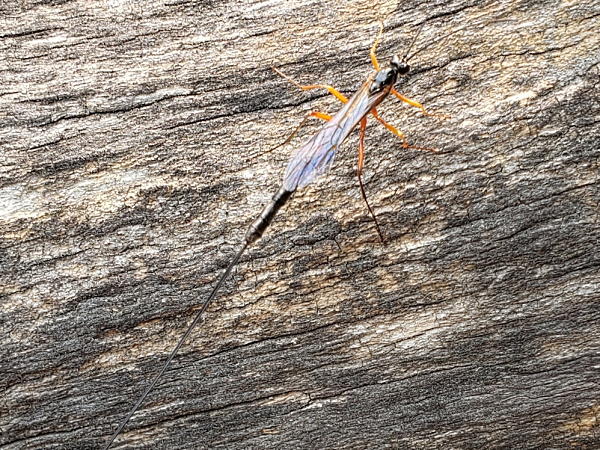 Welcome to the world of Colorado wasps.

This introduction focuses on the more easy to identify groups or families of wasps that inhabit residential areas around state in ecoregions such as the grass and plains of the eastern slopes, the mountains of the central and western ecoregions and the southern ecoregions that maintain a bit of southwest flavor.

In total, it’s not unreasonable to suggest that the average person can easily find forty to fifty wasp species over the course of the season by paying attention to the places wasps inhabit. For example, many wasps flock to some common flowering plants such as the yellow flowers of goldenrod and the white flowers of Queen Anne’s Lace. Checking on them during sunny days is sure to bring up many species. 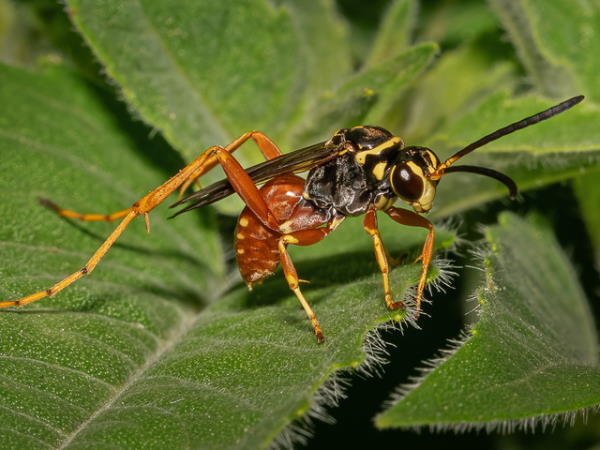 Formal checklists might reveal over one thousand wasp species in the state. Like most states, the list would be heavy on the parasitic wasps such as Ichneumon and the vegetarian sawflies, whose larvae munch on both forest and residential leaves of trees and shrubs. The picture at the top of the page shows a member of the Dolichomitus genus, known for the long, thin bodies and long ovipositors.

One survey Spider Wasps Of Colorado (Hymenoptera, Pompilidae): An Annotated Checklist Great Basin Naturalist 57(3), 1997 pp. 189-197 lists 143 different spider wasp species found in the state by examining the records existing in a variety of local entomology collections. The author also explains the large diversity is due to Colorado’s ecoregion diversity. The five native tarantula hawk species, for example, can mostly be found in the southern areas of the state that approximate the main ecoregion for the genera, the desert southwest, home to most of the US tarantula population.

Identifying many wasp species, including the majority of parasitic wasps and even spider wasps requires the use of microscopes capable of highlighting the individual physical characteristics that define species. The average wasp enthusiast with pictures in hand still have the opportunity to identify many of the other larger wasps because of their distinct physical characteristics. The wasps links points to additional information on wasp species according to family to help individuals with additional questions.

The picture appears to show a member of the Ceropales genus. While all spider wasps feed their larvae spiders, Ceropales stand out as being parasitic. They use the nests of other spider wasps to lay their eggs. 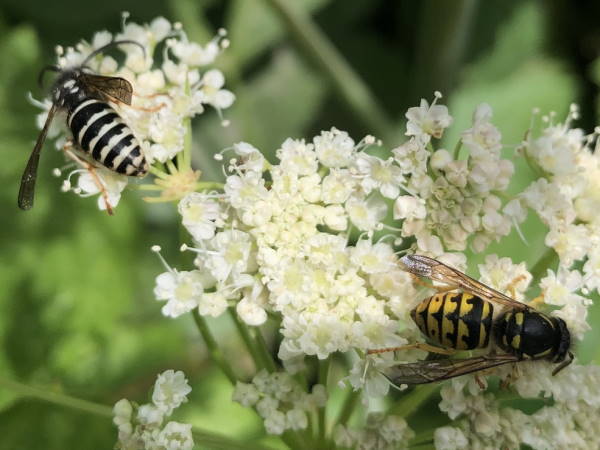 Because of the concerns for health and safety, the stinging wasps of the Vespidae family, commonly called Vespids lead the discussion. Basically, Colorado hosts a handful of the stinging wasps in the paper wasps, yellowjackets and hornets category. Additionally, the family consists of the potter and mason wasps and they really don’t pose a stinging problem.

The good news is that large strides have been made for the smaller subset of individuals who might suffer severe health effects from yellowjacket and paper wasp stings.

The species with a yellow pattern looks to be a common aerial yellowjacket. The black circular spots on the sides of the yellow abdominal bands suggests it’s a queen.

Because yellowjacket species can build both aerial and ground nests, homeowners capable of identifying specific species get a step on on seeking out their nests for removal if necessary. 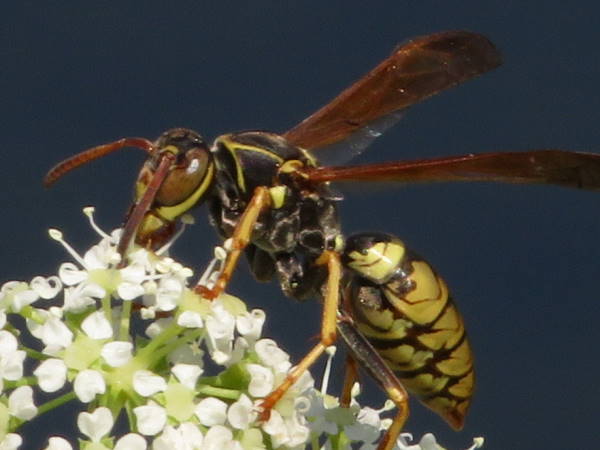 Nuisance paper wasp nests on the other hand, are easier to discover because they are usually built under porch roofs and other more protected areas around the house. The picture shows a Golden paper wasp, the most common native species in the state.

The eastern United States accounts for most of the paper wasp diversity. About ten paper wasp species can be found in the state with some of the eastern species reaching as far as the eastern slopes of the Rocky Mountains. 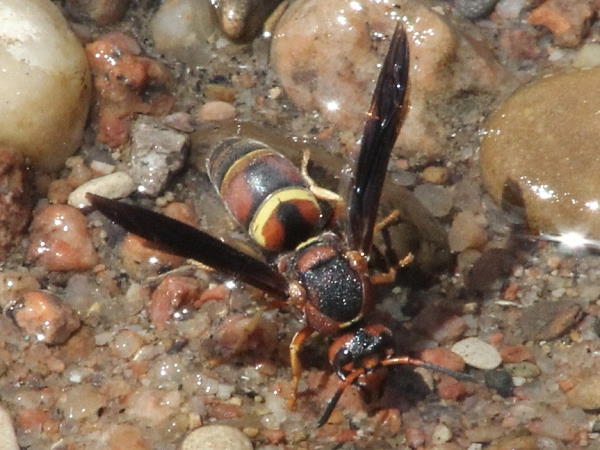 Potter and mason wasps are the medium sized vespids that frequent garden flowers. They come in a large variety of yellow and black, black and white, and some red body patterns.

Contrary to the eusociality of the yellowjackets and paper wasps, they are solitary wasps that build single nests.Species in the genus Euodynerus genus commonly have yellow bodies, although as the picture shows, some have red body patterns. 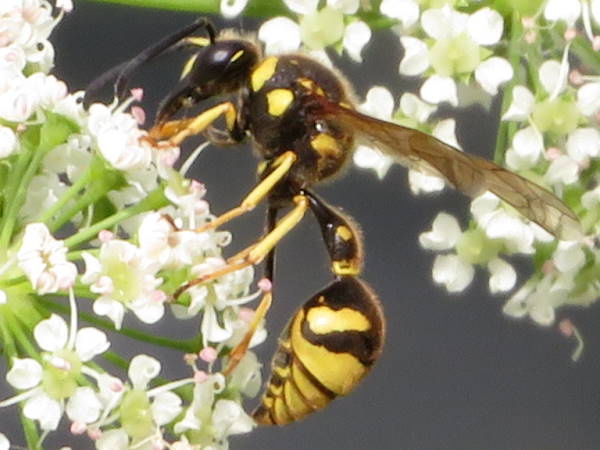 The Cross Potter wasp (Eumenes crucifera), another species, can be easily identified by the presence of the large petiole or waist. They also grow a bit larger than the other potter and mason wasps. 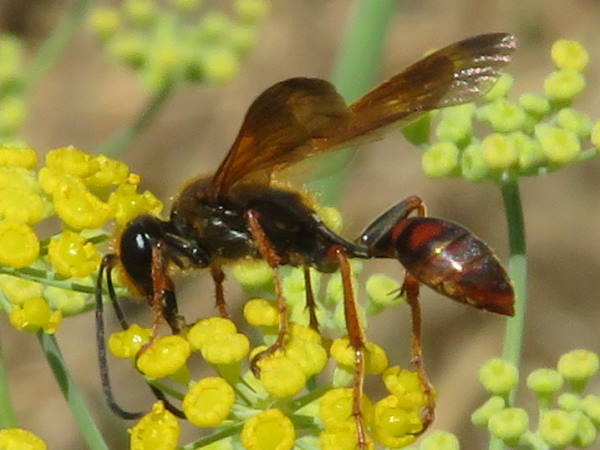 The large size of thread-waisted wasps makes them easily noticed around the home and garden. Solitary Wasps, they often get their nicknames based on their nesting habits. The picture shows an Elegant Grass Carrying Wasp, one of a handful of native species.

The name suggests one might see them flying with grass they use to build their nests, sometimes around residential window sills. Red patterns on the abdomen serve as good field identification clues to separating them from other species in the genus. 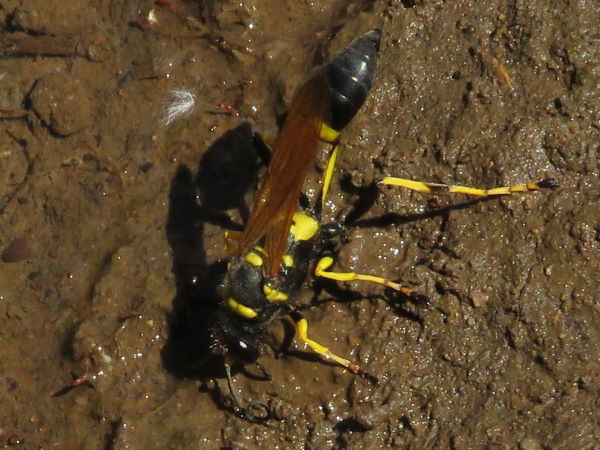 Here’s the typical yellow and black Mud Dauber. As the picture highlights, they can often be found on the muddy banks of ponds and slower moving waterways collecting mud for their nests. 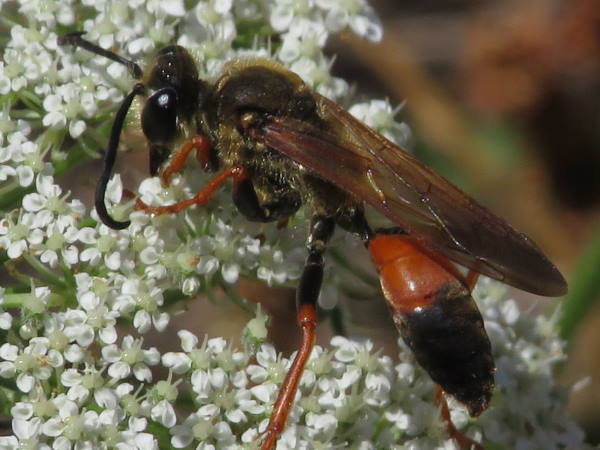 Finally, here’s the Great Golden Digger Wasp. The black and red abdomen with yellow hairs on the upper body make them easy to identify. The common name digger wasp refers to their nesting behavior of digging holes in sandy soil. It’s important to known that members of the digger wasp genera are not the only set of wasp that dig nesting holes. They just received the common nickname. 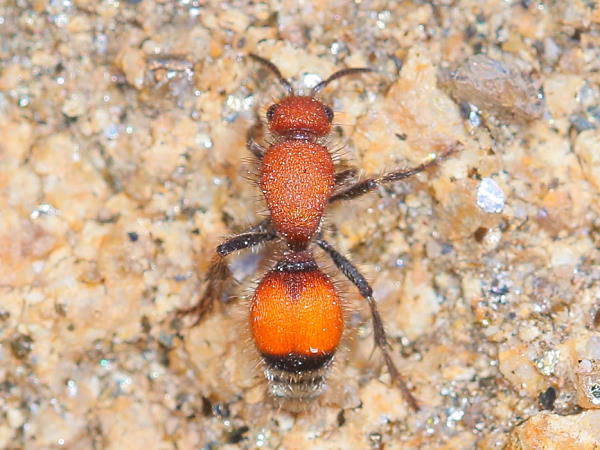 Despite differing appearances Velvet ants get placed in the same superfamily as spider wasps. Females are wingless, and as the picture shows, their body resembles an ant. Like spider wasps, hundreds of species have been documented in the United States, most in the sandy soils of the Southwest. Therefore, the southern half of the state would be the prime area for finding many species. 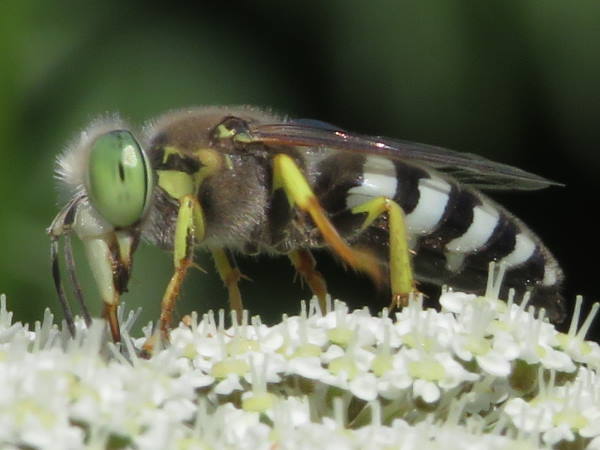 While many wasps dig nests in sandy soils, only the American Sand Wasp receives the honor of the formal nickname. They belong to the Crabronidae family. 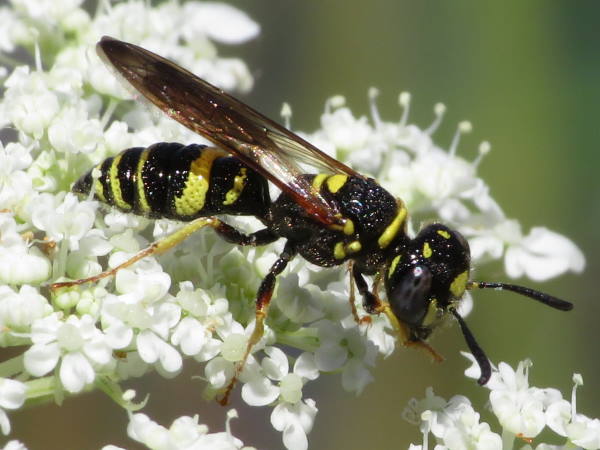 It’s another large family of wasps with familiar groups such as beewolves, weevil wasps. Along with a few additional species, think of them as the smaller wasps with yellow body patterns that visit neighborhood flowers throughout the summer season.

The picture shows the very common Hump-backed Beewolf. Notice the pocked body and blue eyes of the adult. Those are good initial field identification clues. In fact, many Crabronidae species can initially be placed in the family because of their colorful eyes. 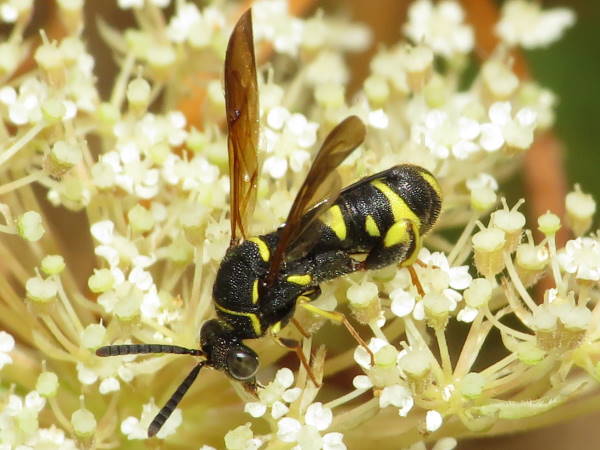 While many people rightly associate the Ichneumon wasps (long, thin wasps with ovipositors) with the parasitic wasp group, a smaller, yellow chalcid wasp, also a parasitic wasp can often be seen around the flower garden. The thicker legs and round body serve as good initial field identification clues.