A variety of wasps, especially the vespids, are stinging wasps that live around residential areas. The Florida climate is conducive to having wasps around almost year round. So, it’s difficult to get by any day without seeing at least one wasp species.

The video shows a typical paper wasp nest with the flat or umbrella shaped nest. Removing the nest while it is being built, rather than waiting for the nest to be completed and filled with wasps removes most of the threat to family members.

These nests are often build around homes, under porches and other areas sheltered from the elements. Removing the nests with a broom during the spring should be enough to discourage the queen and drones from rebuilding. 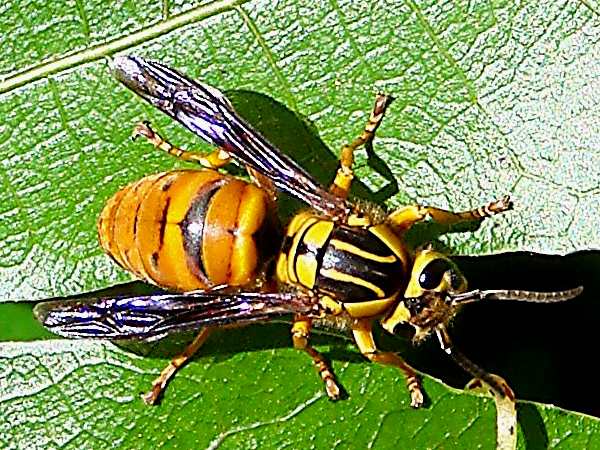 Yellowjackets, on the other hand, build nests in the ground from spring through fall. In the southern end of their Florida range, a colony can stick around until December.

They can aggressively attack family members and pets that stray into their territory. Calling a nest removal expert is usually the best advice one can provide.

The picture shows a Southern Yellowjacket with the two stripes on the thorax. Areas of Florida also host the more common Eastern Yellowjacket. It lacks the thoracic stripes. 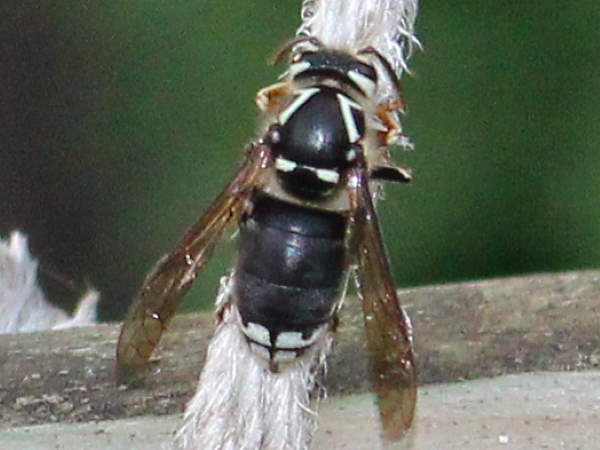 Finally, the stark black and white marking make for easy identification of the Bald-faced Hornet. They are related to yellowjackets, however they build large round nests on tree branches and other similar places around the yard. 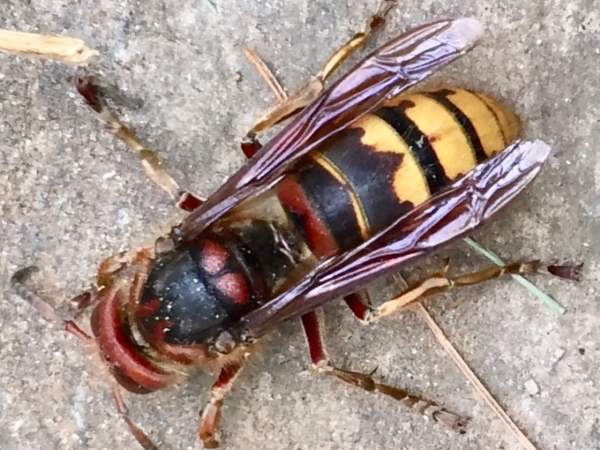 As the name suggests, European hornets are a non-native species that have populated most areas of Eastern North America, including Florida.

They can grow to over one inch in length, so it’s easy to see them when they are in the yard. While they slightly resemble yellow jackets, like Bald-faced Hornets, they build above ground nests. 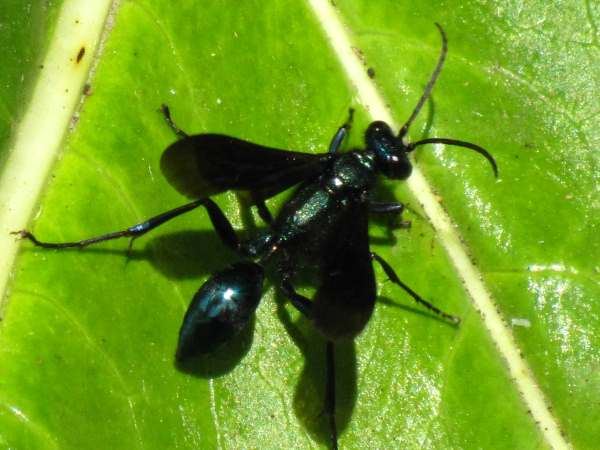 A few Florida wasps have a coast to coast range, and the group or family known as thread-waisted wasps is no exception.

With the exception of the Pollen Wasp, wasps are predators. The name of the wasp is a give away for the types of insects they prey upon. Fortunately, thread-waisted wasps tend not to be aggressive. Therefore, there’s little reason to fear seeing them in the yard. 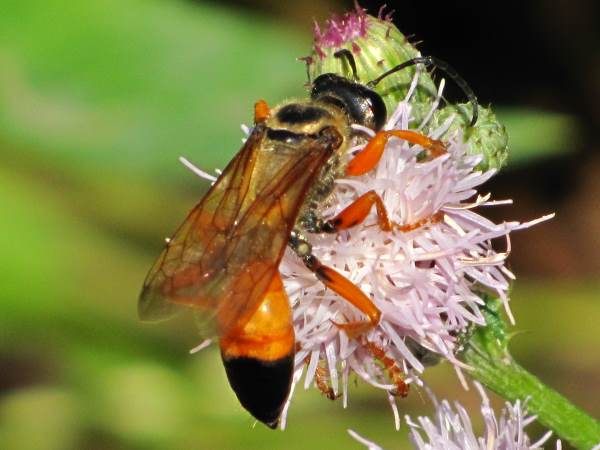 Partial red legs and a black and red (reddish) abdomen) are the best field ID clues for the Great Golden Digger Wasp. They are not aggressive. 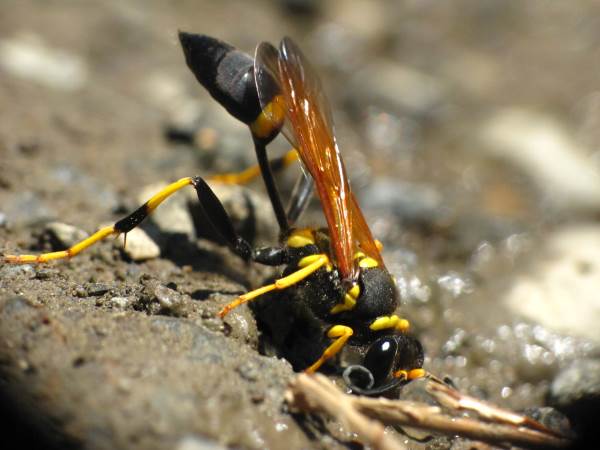 Black and Yellow Mud Daubers can be considered beneficial insects. They capture spiders to as prey for their larvae. Adults help pollinate flowers. They are not aggressive. 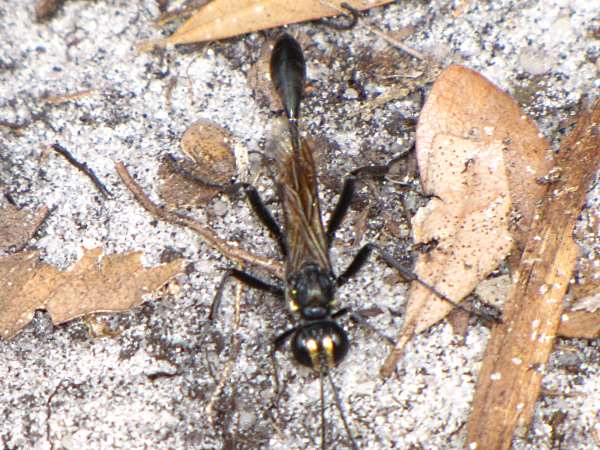 The extremely thin body makes them easy to identify. 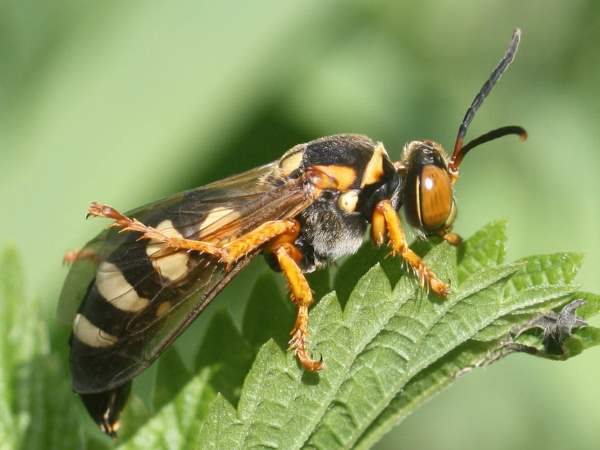 The name of the wasp often reveals its prey. So it is with the Eastern Cicada Killer wasp. They can grow up to two inches in length, presenting a scary appearance in the yard.

Fortunately the females, the ones that sting, build their underground nests and don’t hang out around the yard. That’s mostly the hunting males. 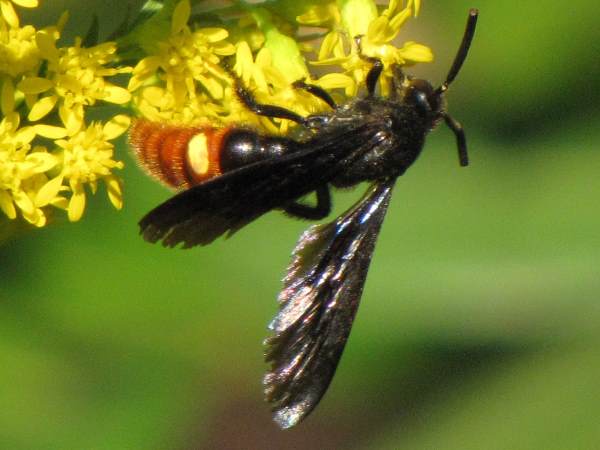 Looking for bright spots or pattern on the abdomen is a fairly good rule of thumb for initially identifying any Scoliid wasp species in the yard. 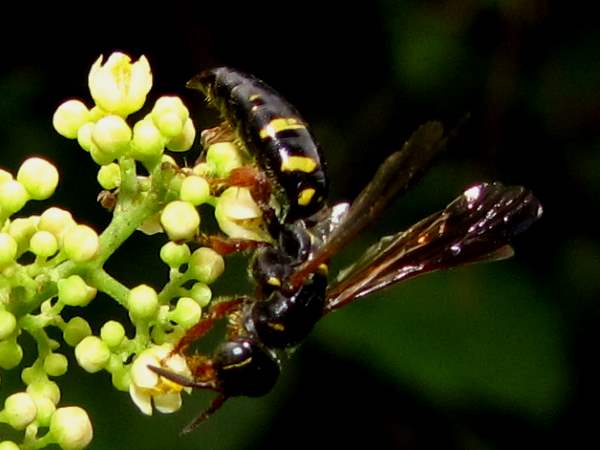 Another family of flower wasp, Thynnidae, also use beetles as prey for their larvae. They generally are medium sized wasps with thin bodies. 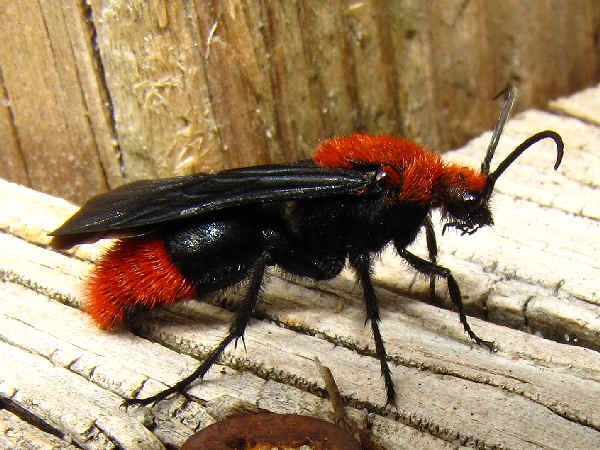 The red, hairy body of Velvet Ants signal danger. The sting of many species are very painful. Males have wings. Females are wingless.

In most of their northern range summer is the peak season. Florida’s warm weather means they can be found in November.