When it comes to Texas wasps, it might be fair to say that they compete with beetles for the title of most diverse Texas insects. While the formal list of Texas wasps might be buried in the bowels of an entomology department somewhere in the state, no comprehensive list exists can be easily found on the internet. 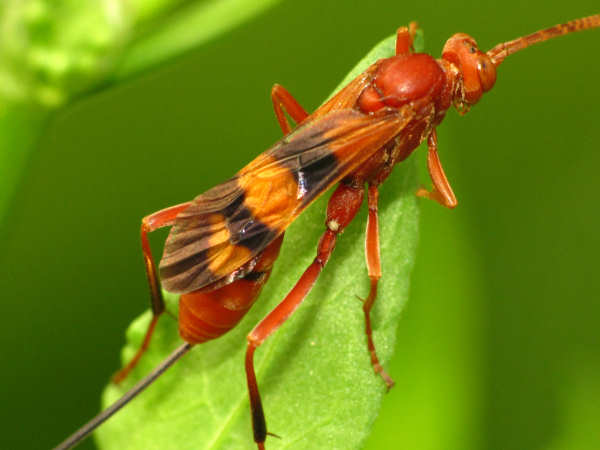 One need go no further than the Ichneumon wasps to understand that wasp identification in Texas is almost a practical impossibility for the average Texan.

Over ten thousand species of Ichneumon wasps along, are documented in the United States. Texas may host a couple thousand species. Generally they share the characteristics of thin bodies with long antennae and extended tails, formally called Ovipositors.

. Generally speakig, but not always, the Braconid species are the smaller of the two. the top picture shows a fairly colorful Ichneumon species.

The remainder of the article provides a practical guide to Texas wasp identification, beginning with the wasps of most concern, the vespids. Two types of vespids cause concern in Texas, yellowjackets (genera Vespula and Dolichovespula) and paper wasps (Polistes). The green Wasps button at the top of the page leads to information covering many more wasp families and species. 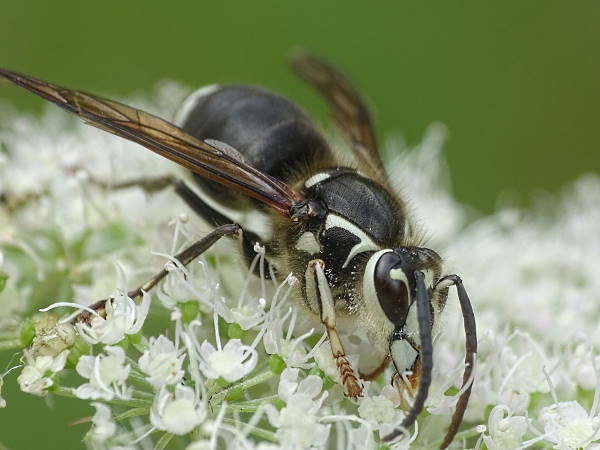 Think about the two types of Yellowjackets based mostly on the types of nests they build.

Dolichovespula yellowjackets build aerial nests. There are six species in the United States. Only one, the Bald-faced Hornet lives in Texas. While it has the common name hornet, it’s actually a yellowjacket. The stark black and white body pattern makes it easy to identify.

In residential areas, look for their round nests on tree branches. make closed, football-like aerial nests on trees. 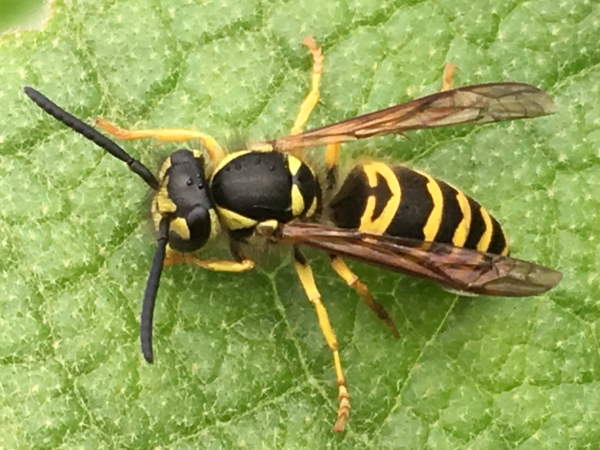 Three Vespula yellowjacket species, the type that build their nests primarily (not exclusively) underground also can be found in the state. For the most part, their common names describe their range. 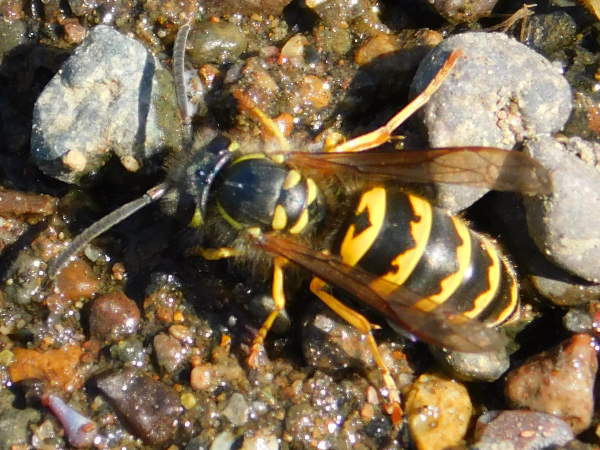 Likewise, the Western Yellowjacket has a range that extends into West Texas.

A close inspection of the body pattern shows a different size anchor mark on the top of each species. Otherwise both have the traditional black and yellow body coloration associated with yellowjackets. 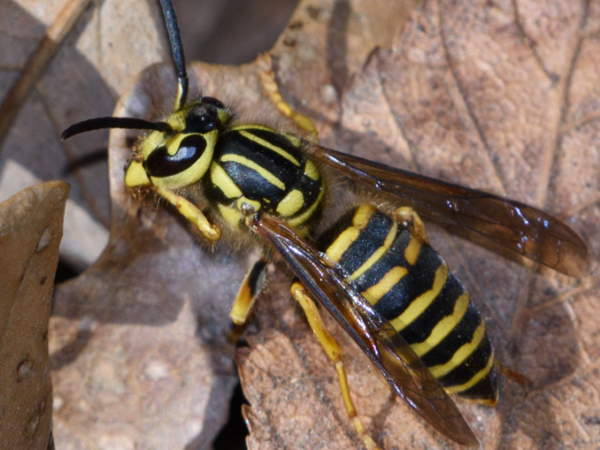 Knowing the Southern Yellowjacket is a Southeast species allows one to assume that they migrate to East Texas via the Southeast. The striped on the thorax are the defining characteristic for identification.

The typical yellowjacket cycle is for the queen to begin building the colony during the spring. During the summer, construction and rearing of young kicks up a notch. By fall, the colony beings to die off during the cold weather, leaving the queen to overwinter and being anew when the weather turns.

Nest built in yards can bring the wrath of the entire colony down on an unsuspecting person who walks on or near the nest opening.

The state’s temperate to subtropical climate means an extended season for the colonies. 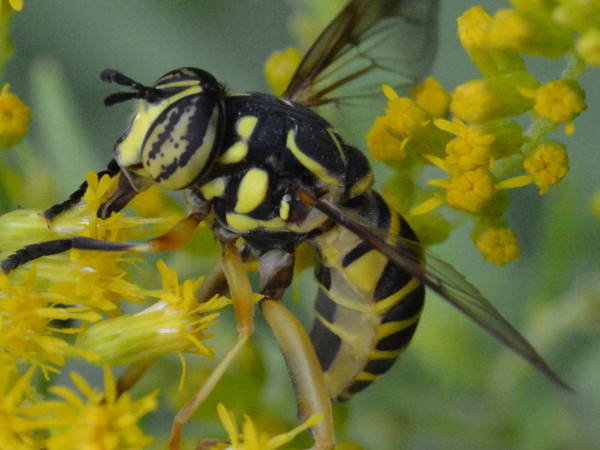 Finally, don’t be fooled by the mimics. The picture shows an Eastern Hornet Fly, with a remarkable ability to mimic yellowjackets. The eyes are a dead giveaway it’s not a yellowjacket. 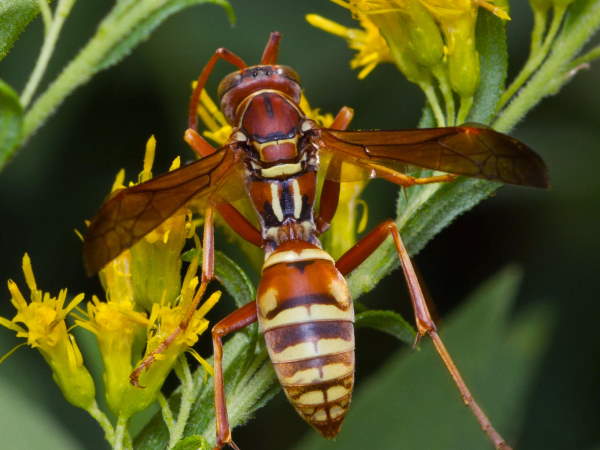 About two dozen paper wasp species have been documented in the United States. More than Over one-half of them can also be found in Texas. Their nests can be found on porches, in mailboxes and other areas around the house almost year round.

For readers uninterested in species ID, the old saying, an ounce of prevention is all one need keep in mind. Keeping an eye out for nest building activity at the early stage represents the best control strategy. Knocking down the nest with a broom or other tool, when only one or two wasps are present, usually words to discourage the queen’s nest placement at that site.

Other species such as the Red Wasp (Polistes carolina) are Southeast paper wasps and found mostly in East Texas. Adding some complexity to the paper wasp identification task, a few species look very similar. For example, Polistes rubiginosus is also a red wasp and can often only be sorted for carolina by the use of a microscope.

Similarly, a sub-species of Polistes major can be found in Texas and it looks very similar to a neotropical species found only in South Texas, (Polistes carnifex).

Here’s a list of additional species found throughout the state: 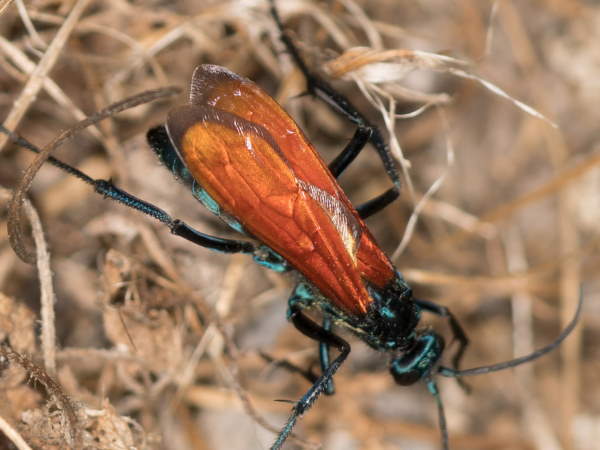 This large family of solitary wasps consists of over 1,100 species in the U.S. and Canada. Most species prey on related species, such as cicadas, spiders, or caterpillars.

Because of heir large size, females can grow up to two inches, Tarantula hawk wasps are probably the most recognized of all the spider wasps.

As the name suggests the female searches out tarantulas, paralyzes them and literally drags them to the underground nest.

Beware, while they are not aggressive, they can sting humans and the sting is painful. 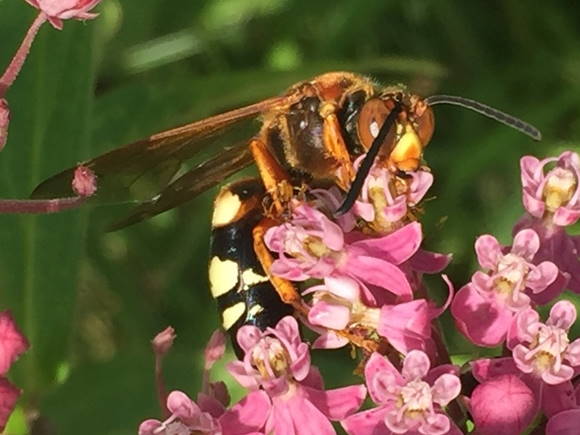 It’s no secret, especially because of their loud singing, there are literally cicadas somewhere in Texas every summer season.

East central Texas is a veritable cicada paradise. I have never visited a region where so many species are as abundant as occur in, for instance, the Madison County region. They are numerous in many parts of the post oak woods, but are most plentiful in the alluvial forests and groves in the lower grounds along the Navasota and Trinity Rivers.

While Cicada Killers are not dangerous wasps, their above average size (1 1/2 inches) can cause a stir.

It’s always a good idea to be safe in the yard and wear shoes during the season because the females dig nests in the ground and feed the cicadas to the young. No sense in stepping on a large wasp emerging from the ground. 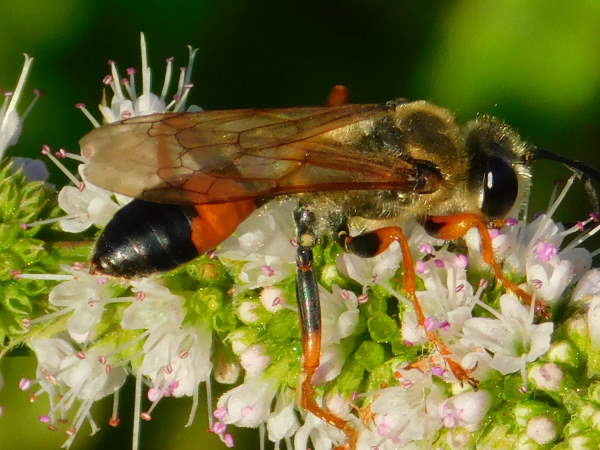 Thread-waisted wasps are a very common family of wasps that visit residential areas. They can be considered beneficial insects because, depending on the species, they feed on pests such as grasshoppers and caterpillars. 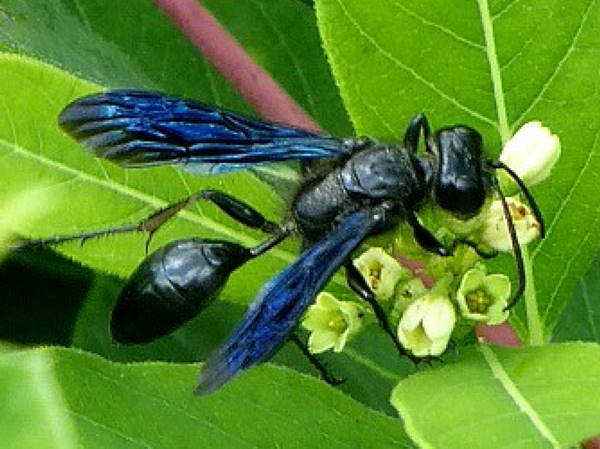 The Great Black Digger Wasp is another very common species. It’s the all black wasp.

All of the Texas species either follow the red and black abdomen pattern or the all black wasp pattern. 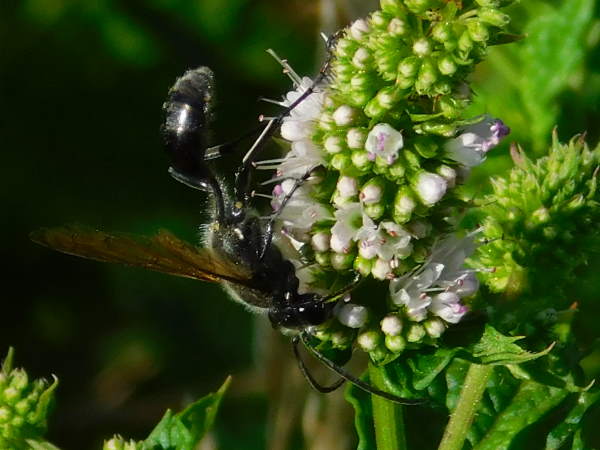 Because the related grass carrying wasps also have black bodies, they add confusion to the wasp identification process.

For interested individuals, the color of the legs or waist are often good starting points for identifying the two or three different grass carrying wasps in the state. Or conversely, if you see a black wasp in the yard carrying some grass, it’s probably going to build its nest. 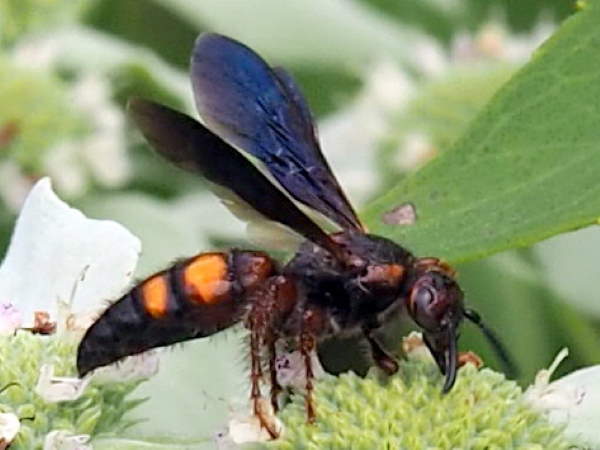 Don’ be alarmed by seeing some large wasps with dots on the abdomen flying around the grass or flowers during the summer. Odds are they are Scoliid wasps. They feed their larvae the grubs they find buried in the lawn. They can grow up to two inches in length.

Multiple species can be found in a given area. The picture shows a Noble Scoliid wasp. It’s one of the smaller species and common along the southern border of the United States. The video at the top of the page shows Pygodasis ephippium. Growing up to two inches in length, it ranks among the largest wasps found in the United States. There’s no missing it when it nectars in the gardens of South Texas. 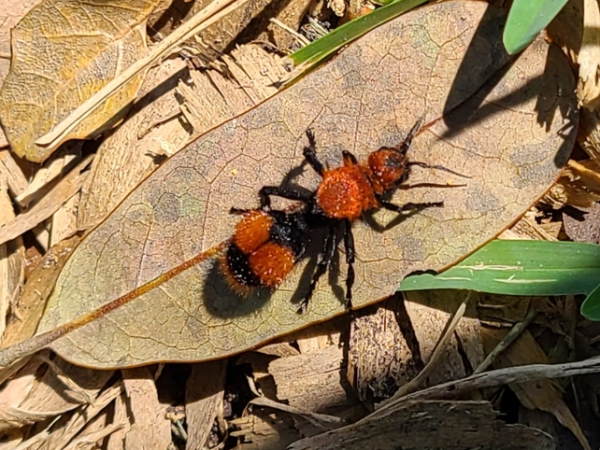 When it comes to velvet ants, it’s permissible to throw out the notion that bees are hairy and wasps are not. Despite the name, the often colorful and hairy insects called Velvet Ants are wasps. Males have wings and females do not have wings. Only the females sting. They can be found throughout Texas, often in sandy soils. According to research cited by Texas A&M, “at least 84 species are possibly considered to be “velvet ants” and occur in Texas. These species are from the three genera: Timulla – 15 species, Ephuta – 9 species, and Dasymutilla – 60 species”.

The Cow Killer (Dasymutilla occidentalis) shown in the picture, is one of the larger species. Fortunately the bright red coloration makes it easy to spot. Their sting is reported to be one of the most painful of all the stinging insects.