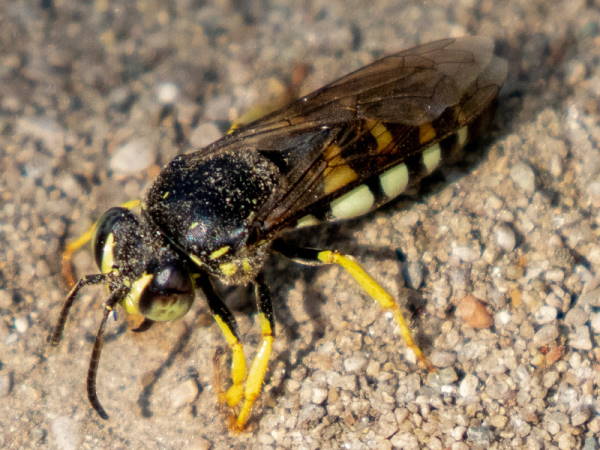 Like all states, a variety of people share an interest in Louisiana wasps because their presence affects a variety of interests. This introduction to Louisiana wasps provides a summary of both the beneficial and potentially harmful aspects of wasps in the state. The wasps links points to additional information on wasp species according to family to help with additional questions.

Starting with three examples of the beneficial aspects of wasps, consider the group of wasps with common names such as beewolves and sand wasps that constitute part of the Crabronidae family. The picture at the top of the page shows a Four-banded Stink Bug wasp. The presence of stink bugs in the yard and in agricultural settings can be problematic. Seeing the wasps indicates there’s a natural pest control wasp helping out.

Weevil wasps, another genus (Cerceris) in the family, can also provide benefits to the landscape. For example, the introduction of an invasive beetle, the emerald ash borer, has caused concerns about the health of ash trees throughout the Eastern United States, north to south. When it was detected in Louisiana, researchers decided to study the presence of Cerceris fumipennis, nesting sites around the state to determine their utility in detecting the presence of the Ash Borer. It’s a wasp that specializes in the capture of many Buprestidae, including the emerald ash borer.

Source: Observations of Cerceris fumipennis (Hymenoptera: Crabronidae) phenology and variation in its buprestid prey in Louisiana
Florida Entomologist — Volume 98, No. 4. 2015.

There’s probably close to four dozen different Crabronidae species found in the state. Finding many of them can be as easy as walking the grounds of sandy soil areas during the season. They can often be spotted as they burrow into the soil while building their nests. 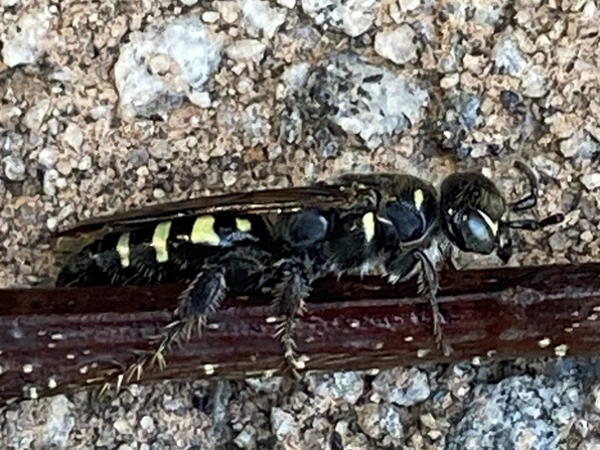 Moving to a different wasp family, according to entomology department at the University of Florida, “Tiphiid wasps are used as biological controls of white grubs in farm settings and as a turfgrass pest management strategy” The picture shows the Typhiid wasp, Myzinum obscurum. Females can grow close to an inch in length, making them easy to see. 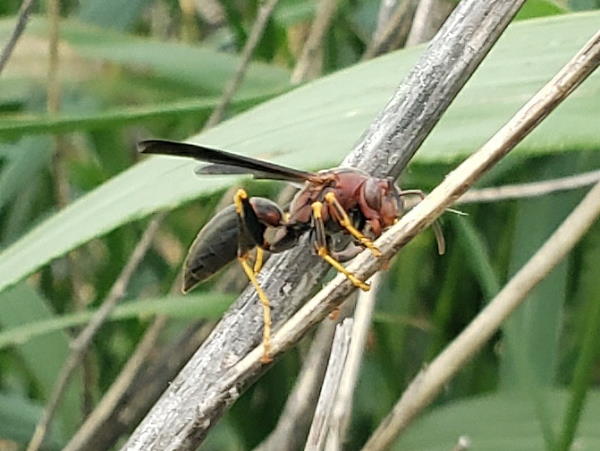 Only a subset of the wasp population gets categorized as insects of medical concern. Social wasps, the yellowjackets, hornets and paper wasps (family Vespidae) present different degrees of danger to Louisiana residents.

Recently a physician from New Orleans surveyed the wasps in open spaces such as parks and other places around the city to determine the types of social wasps present.

From a medical point of view, the need for documenting wasp species derives from the fact that identification of wasps to the species level enhances the health prospects of individuals who experience severe allergic reactions to stinging wasps. Fortunately, wasp venom research over the past couple of decades has improved to the point where some of the allergen components of wasp venom have been documented, making it comparatively easier for health professionals to both test for paper wasp and yellowjacket allergy sensitivity in people and then offer fairly effective remedies such as a series of allergy shots. This proactive management strategy potentially helps many people avoid the more severe consequences of wasp stings such as hospital visits, and in some cases death.

Interestingly enough, the survey only documented paper wasps and no yellowjackets. It could be the case that because New Orleans is susceptible to floods, ground nesting yellowjackets find the city’s green spaces inhospitable habitat. In an urban environment, the presence of the aerial nests of yellowjackets stand out and are therefore easier to remove at early stages of their development.

A quick review of the citizen science site Inaturalist uncovered two paper wasp species not documented in the survey, bringing the total of paper wasps species in New Orleans to seven.

The picture at the top of the section shows the Metric paper wasp, the dominant species found in the city during the height of wasp season. The following pictures show the other paper wasp species present. 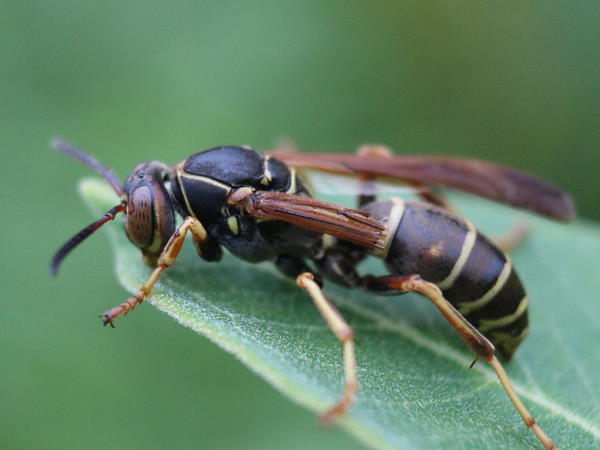 The Northern paper wasp (Polistes fuscatas) is another widespread species. 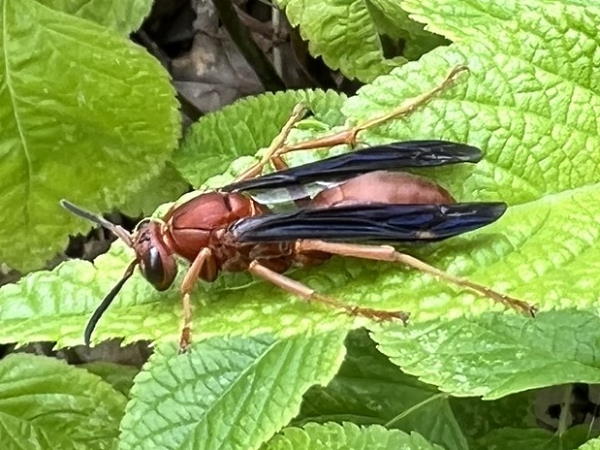 The red body of the Carolina wasp serves as a good identification clue. 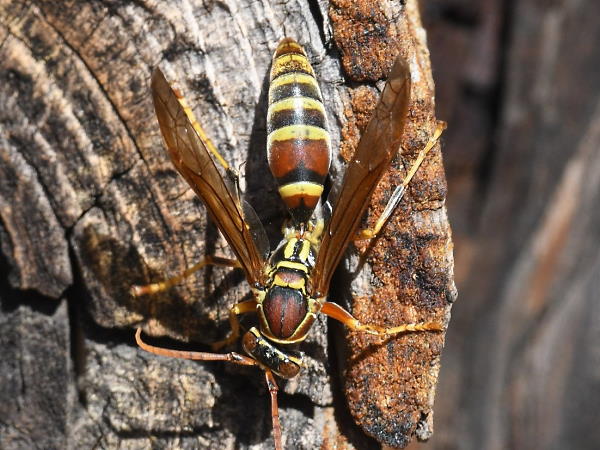 The colorful body of Polistes exclamans helps differentiate it from the other species. 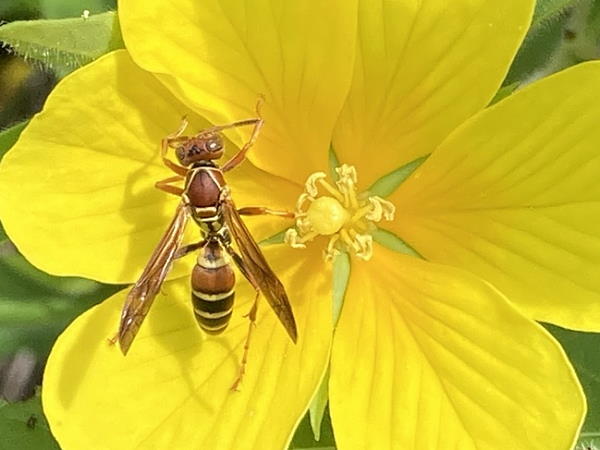 Polistes dorsalis better known as Hunter’s Little Paper Wasp has a range that extends across the southern half of the United States. 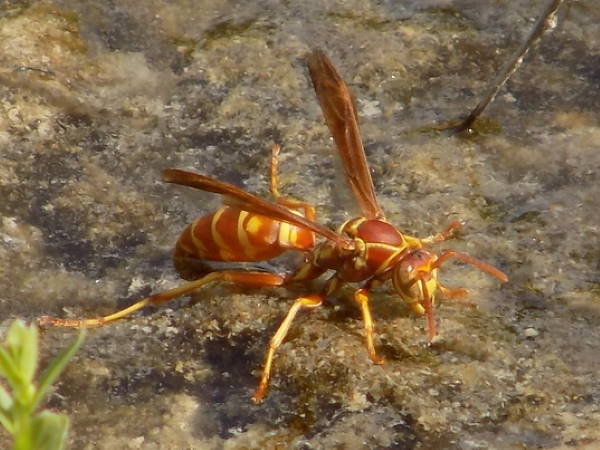 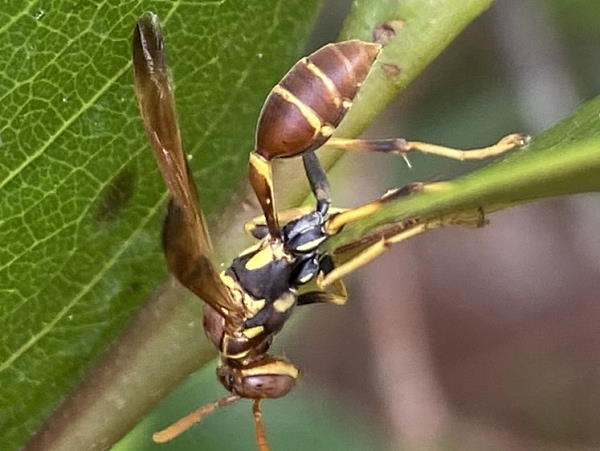 Finally, a newly introduced species, the Mexican paper wasp was documented in the city. A neotropical wasp originally based in Florida, it’s range has extended across the Gulf Coast and into Texas.

Source: Exposure to species of Vespidae in the urbanized areas of New Orleans, Louisiana Annals of Allergy, Asthma & Immunology. 127 (2021) 378−397

Paper wasps yellowjackets such as the southern yellow jacket, the eastern yellow jacket and the European hornet inhabit many areas of the state. The ability to identify them helps improve the odds of keeping all the state’s residents healthy. 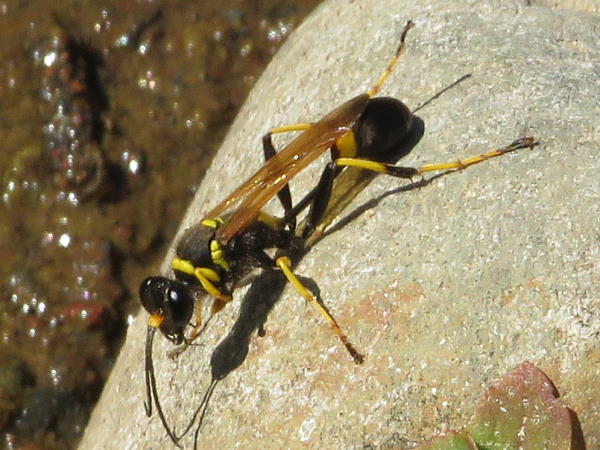 About two dozen species of thread-waisted wasps, covering eight different genera can easily be found throughout the state. Often large in size, they can be identified in the field, or in a photography by the presence of distinct body colors and other physical traits . Some of the species, such as the Yellow-legged Mud Dauber in the picture, have a national range. Two additional species: also can be found throughout the state. 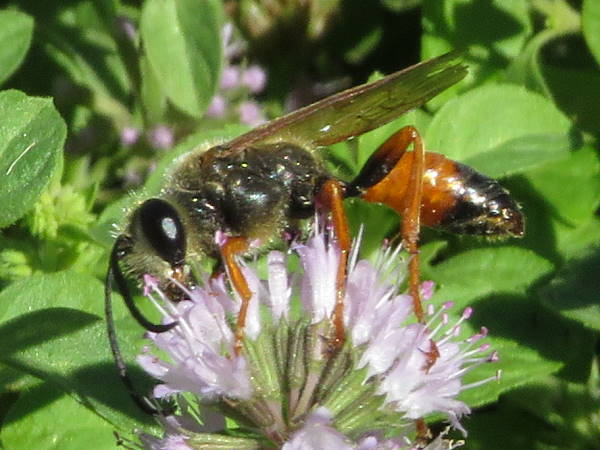 can commonly be seen in back yard gardens around the state. . 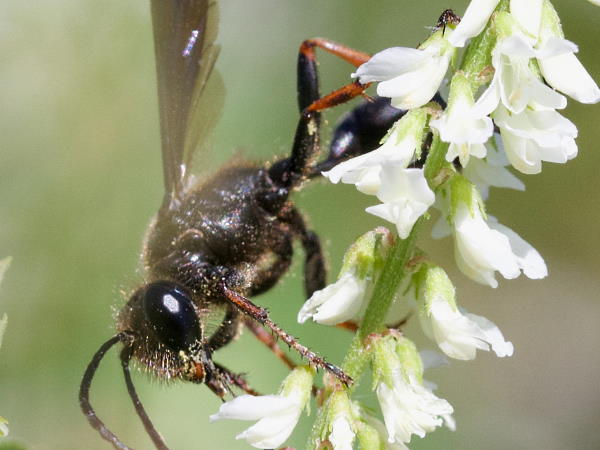 Grass carrying wasps (genus Isodontia, get their common name based on their nest construction. Similar in size to the Sphex, they also share some similar physical features. For exampke, Isodontia philadephica is an all black wasp, Unlike the great black digger wasp, it usually rests with its wings open. Additionally, the brown-legged grass carrying wasp also has a black body, and like the katydid wasp, has brown legs. Resting with open wings also differentiates it from the katydid wasp. Three additional species found in the state are: