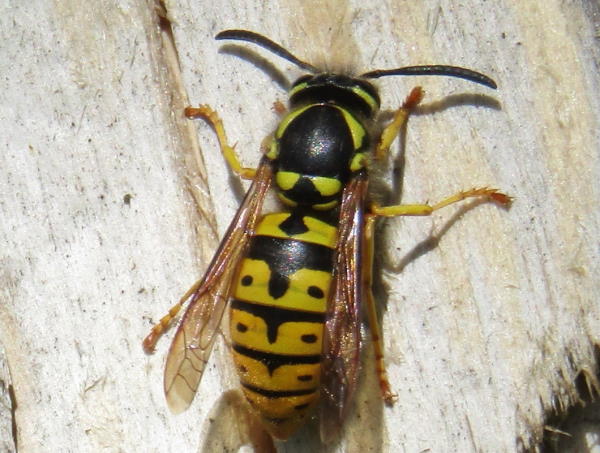 Dividing Illinois wasps into the beneficial and less than beneficial categories provides a good starting point for highlighting information for the average citizen.

Vespid wasps, stinging wasps such as yellowjackets, paper wasps and hornets, usually get categorized as less than beneficial because they pose a nuisance factor around residential areas, along with their stings being a medical concern for a smaller percentage of the human population. In Illinois, yellowjackets account for the majority of stinging issues.

The picture at the top of the page shows a German yellowjacket, an introduced species that adapts to urban areas by building nests in free spaces around buildings, including homes and apartments. It’s always a good idea to find and remove the nests at the earliest possible moment because mature nests can reach a couple a thousand inhabitants. Along with two native yellowjackets, the Eastern and the Bald-faced Hornet, they are the most common species found in the Chicago area. 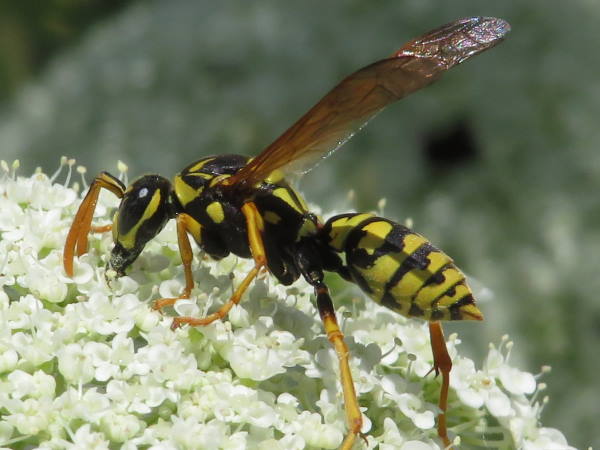 Interestingly enough, another invasive wasp, the European paper wasp has made a home across Illinois, including the Chicago area. At first glance, it may partially resemble a yellowjacket. On closer inspection, the slimmer build and orange antenna can be first field identification clues. Up to a dozen paper wasp species have been documented in Illinois.

On the bright side, wasp venom research has continued to advance over the past four decades with discoveries of the various components of wasp venom like proteins, enzymes and peptides documented. The research has furthered our collective understanding of how and why these compounds cause allergic reactions in humans and consequently how to manage the most severe of these reactions through treatments such as allergy shots.

While the stinging vespids do pose potential problems for all Illinois residents, the past few years of research also give rise to some nuance in their narrative. Researchers discovered that some of the peptides in wasp venom can potentially be used for addressing the every present problem of antibiotic resistance in some bacteria.

An October 2020 news release from The University of Pennsylvania Perelman School of Medicine reported:

A team led by scientists in the Perelman School of Medicine at the University of Pennsylvania has engineered powerful new antimicrobial molecules from toxic proteins found in wasp venom. The team hopes to develop the molecules into new bacteria killing drugs, an important advancement considering increasing numbers of antibiotic-resistant bacteria which can cause illness such as sepsis and tuberculosis.

Similar research continues around the world. For example, the venom from a paper wasp in Saudi Arabia was tested and discovered to potentially address other antibiotic resistant bacterial strains such as staff.

The sequence of the two purified peptides indicates that they belong to mastoparan. The study results may pave way to use this wasp venom in future antibiotics especially in controlling skin infection by Staphylococcus aureus. 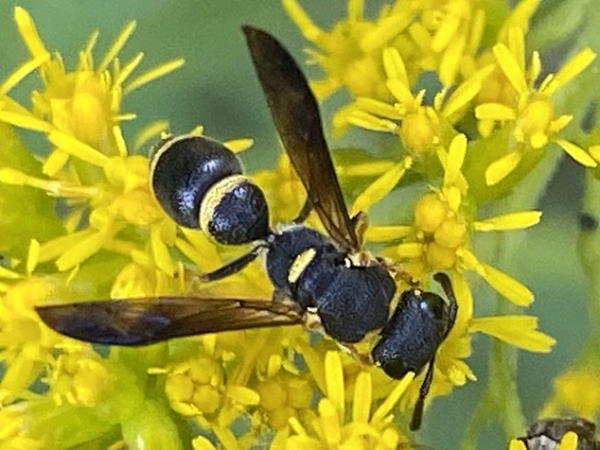 Many of them look similar with either black and white or black and yellow body colors. A microscopic investigation of physical features is often necessary for individual species identification.

Common in the East, the two yellow bands on the abdomen make Parancistocerus perennis, a potter wasp, fairly easy to identify. 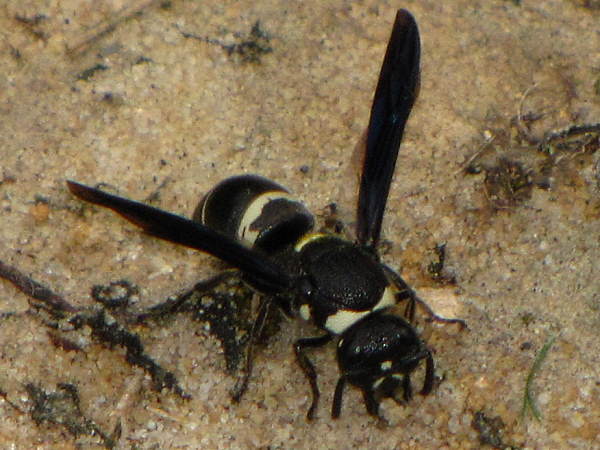 Here’s Pseudodynerus quadrisectus, a Mason wasp with two white bands on the abdomen. 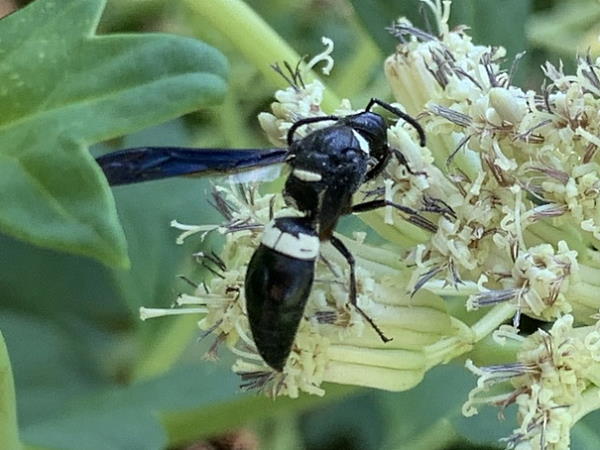 The Four-toothed mason wasp is another very common species. Note the one white band on the abdomen. 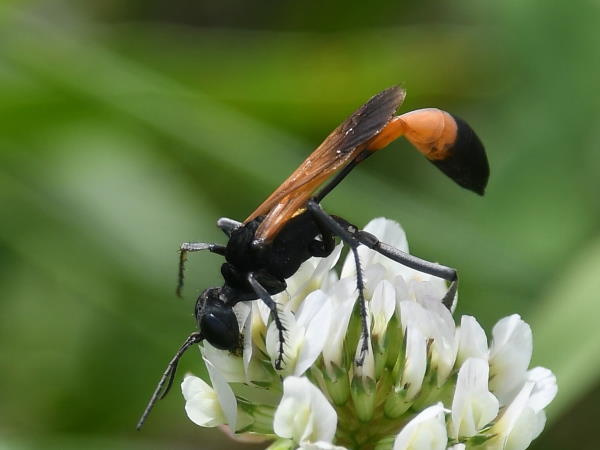 Apart from the vespids, many Illinois wasps easily fit into the beneficial category. Consider them a form of natural pest control that helps maintain an ecological balance in all sorts of habitats, including residential areas. The large number of species makes it impossible to cover them all in this introduction. The green wasps button at the top of this page provides a link that covers wasp families and species in more detail.

Thread-waisted wasps rank high in terms of number of species that can be easiest to identify based on physical characteristics. Ammophlia wasps, for example, can often be identified to the genus lever by way of their long, slender bodies. They that dig nests in sandy areas and they can be found in both urban and rural settings. 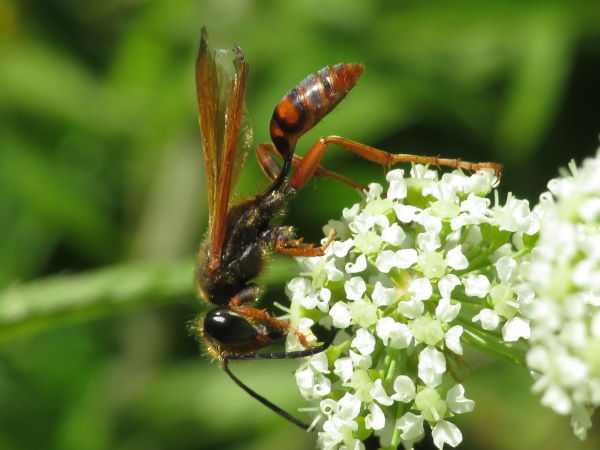 The very common thread-waisted wasps also includes a handful of Grass carrying wasp species that inhabit residential areas around the state. A few have dark bodies with hair color on the body considered a good starting identification point. The picture shows an Elegant Grass Carrying wasp, easily identified by the red patterns on the abdomen. The common name refers to their nest building habits. 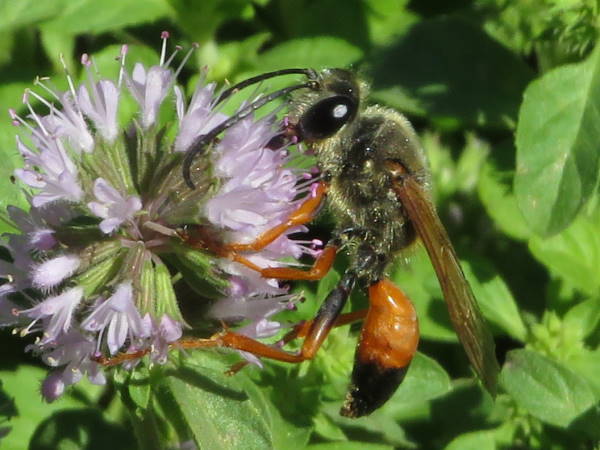 Digger wasps, another group of thread-waisted wasps, come in a variety of colors. They are larger than average size, making them stand out in the garden. The picture shows the common Great Golden Digger wasp. 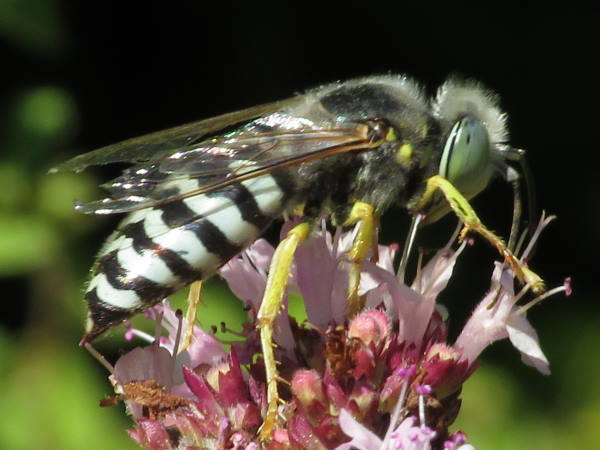 Discussions of the family Crabronidae commonly focus on the more common, colorful and larger members of the family. Eastern Cicada Killers belong to the family and easily get noticed because of their large size. The American sand wasp, pictured, is a medium sized wasp with distinct green eyes. Like many of the beneficial wasps listed here, they build sand nests. 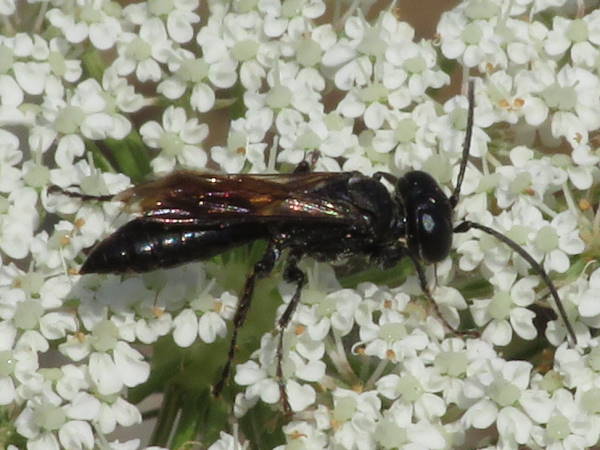 A relative in the Astata genus (pictured) can be easily overlooked. Small in size and an all black body with white hairs, they can be considered beneficial insects because they prey on stink bugs, including the introduced Brown Marmorated Stink Bug. 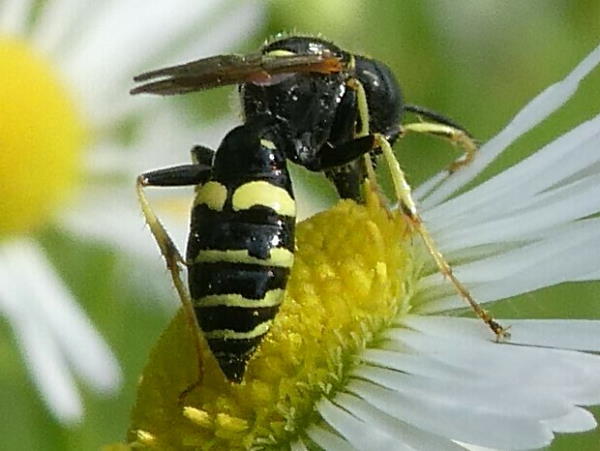 Staying with the Crabronidae family, literally dozens of beewolves and weevil wasp species also live in Illinois. Look for them around the flowers in both urban and rural gardens. In comparison the cicada killers and sand wasps, they are relatively small, often with yellow bodies. Many of the beewolves have pocked marked bodies that provide a good identification clue. 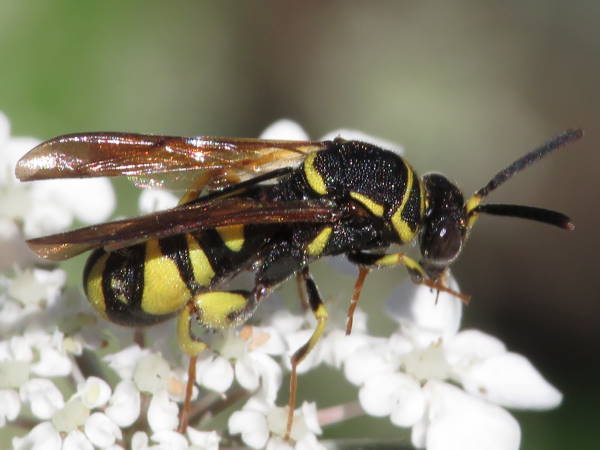 An even closer inspection of wasps in the garden shows many similar sized species with yellow patterns on the body. Potter wasps, for example, can share those physical characteristics.

The picture shows another, often overlooked species, Leucospis affnis. It belongs to the parasitoid category of wasps. That’s basically a catch all category of wasps that do not build nests. Rather, females have ovipositors and deposit their eggs directly into their prey of choice. Many people associate the larger and more easily seen Ichneumonid wasps in this category.

While they are small, Leucospis affnis prey mostly on the the larvae of solitary bees, explaining why they hang out in the garden. Look for the thick leg to help with identification. 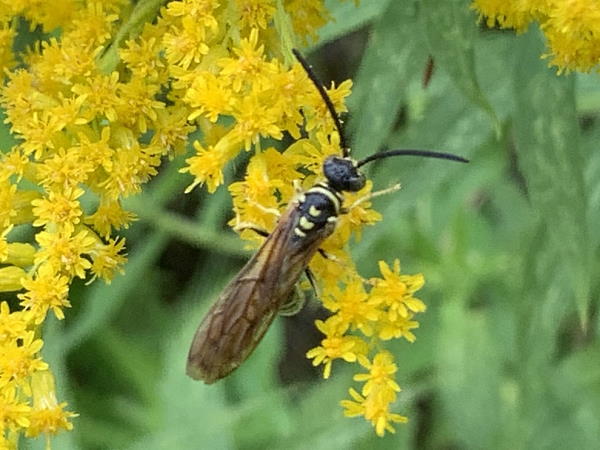 Illinois also hosts four, maybe five Thynnid wasps, small and thin wasps, often with yellow patterns on the body. Finding them in the garden is a good thing because they prey on many pesty beetle grubs.