Skip to content
Wasps North Carolina recently initiated a Biodiversity series attempting to document the states animals, plants and insects. At the time of this writing, they have compiled a checklist of the bee species (over 600 species), and they have yet to publish a similar account of North Carolina wasps. Given the fact wasp species populations in neighboring states reaches over the one thousand species mark, it seems reasonable to suggest that the number serves as a good starting point for discussion.

This introduction to North Carolina wasps focuses on the types of wasps commonly found in residential areas. The green Wasps button leads to addition pictures and information covering a larger variety of species in each of the types presented for individuals interested in more wasp identification help.

It’s understandable that interest in wasps among the human population often starts with the stinging wasps. Fortunately, a very small percentage of North Carolina wasps are considered dangerous stinging wasps. They typically belong to the family Vespidae, commonly known as yellowjackets, paper wasps and hornets.

The half dozen or so North Carolina Yellowjackets formally divide into ground nesting and aerial nesting groups. Homeowners do well to keep that in mind when considering effective yellowjacket pest control. 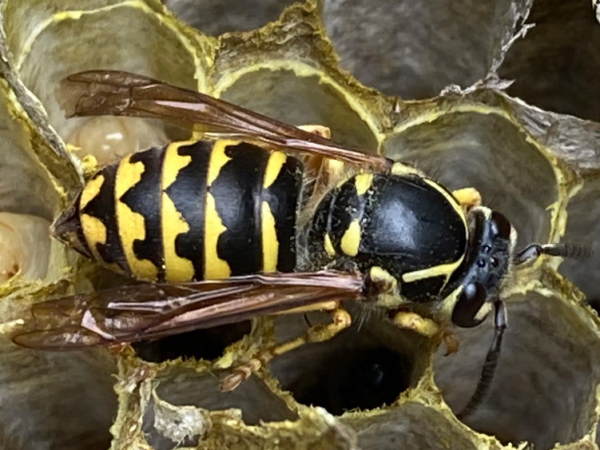 Two aerial nesting species, the Bald-faced hornet, and the Common Eastern Aerial Yellowjacket can be found throughout the state. The physical similarity of the common aerial species. Dolichovespula arenaria, another aerial species, with the Eastern Yellowjacket might make them overlooked. That would be a mistake. This species is very common in residential areas. Around the house, the nests can be found attached shrubs or trees from near the ground to canopy level. In urban situations they are often found on manmade structures. 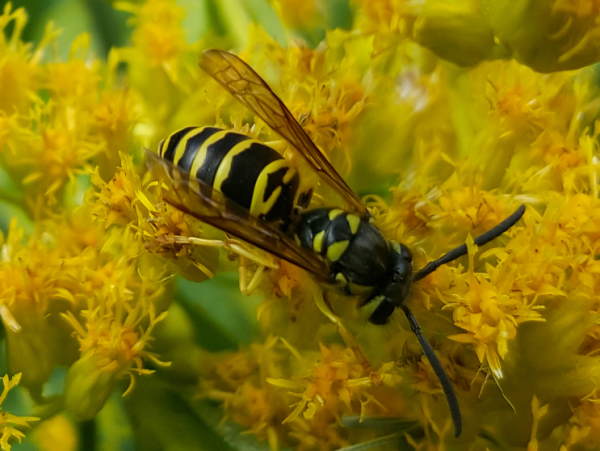 Of the four ground nesting yellowjackets, the Eastern Yellowjackets might be the most common. They usually build ground nests. However, they can also build nests in open spaces in walls or beneath the home. In these instances, it’s a good idea to call a professional pest control company. Look for a black anchor mark on the top of the abdomen as the best field identification clue.

European Hornets are the only true hornets in the state. They tend to be around forested residential areas. Adults resemble yellow jackets, with a brownish red body and yellow abdomen. Queens, which may be seen in the spring, have more red than brown, and are larger than the workers. Nests are typically built in hollow trees, but they can easily become pests when found in barns, sheds and open spaces between walls. That’s especially true with more mature nests that can host up to five hundred or more individuals. 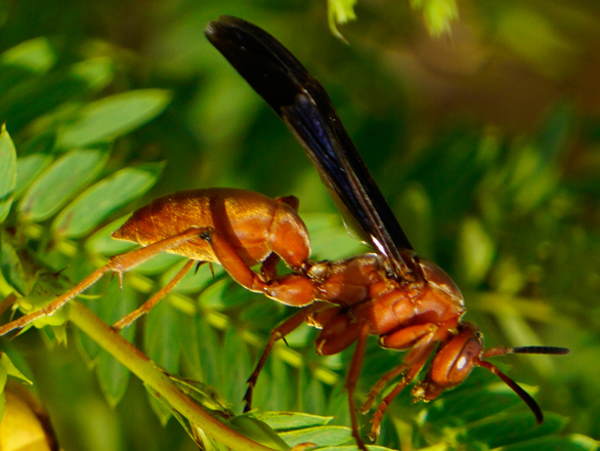 Polistes Exclamens is one of the more colorful and common species found in the state. The video shows a close up of the wasp in early morning.

Paper wasps prey on caterpillars and other pests for larvae food during the long nesting season, usually March through October. Providing natural pest protection in their territory classifies them as beneficial insects. On the other hand, because their territory often includes areas with significant human traffic, the possibilities of nest disruption and defensive attacks by the colony increases.

Because all the species build umbrella nests, knowing how to identify paper wasps in Virginia turns into more of an educational task rather than a pest control issue. Interestingly enough, unlike the yellowjackets, any female paper wasp can begin building a nest and starting a colony. 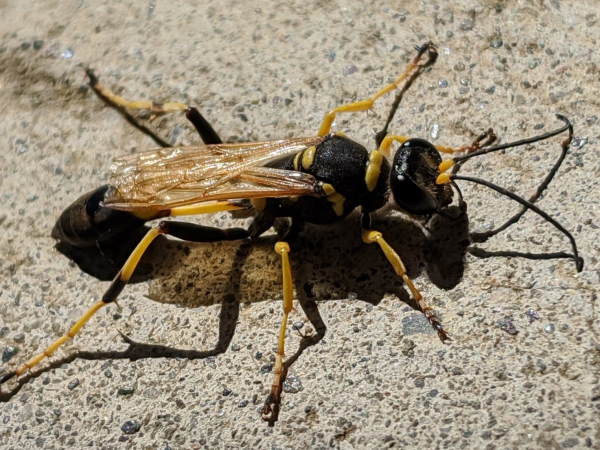 Thread-waisted wasps are easy to identify as a group due to their long, thin waists that connect the abdomen to the thorax. They come in a variety of genera and over one-dozen can be found throughout North Carolina. Mud-daubers is the common name for a genera that can be found near mud holes collecting mud for nest building. The Yellow-legged Mud Dauber in the picture is one example. A black body with yellow markings on the legs makes for fairly easy identification. 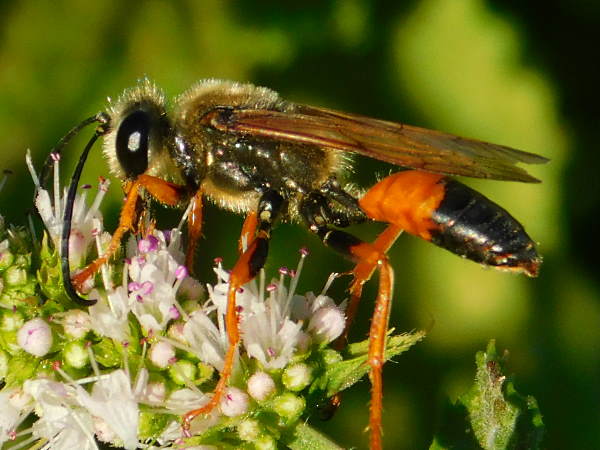 This colorful wasp is about one inch long. The head and thorax are covered with short golden hairs, and the eyes and antennae are black. The legs are red, and the abdomen is red and black. This is a ground-nesting solitary wasp that captures grasshoppers for its brood.

They sting, but they are not aggressive. 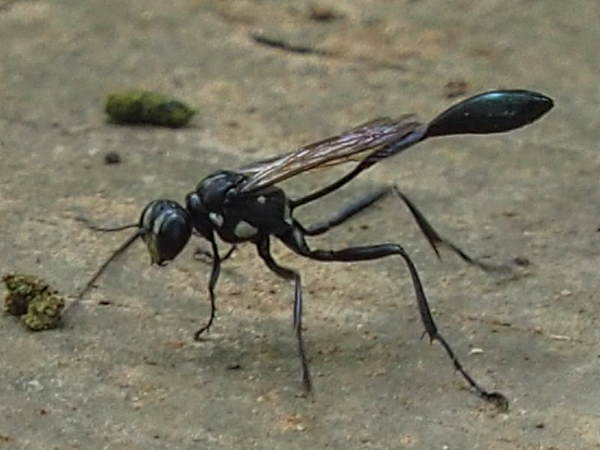 Most people recognize the black and red versions of Ammophila wasps. Eremnophila-aureonotata are a related genus and have solid black bodies. 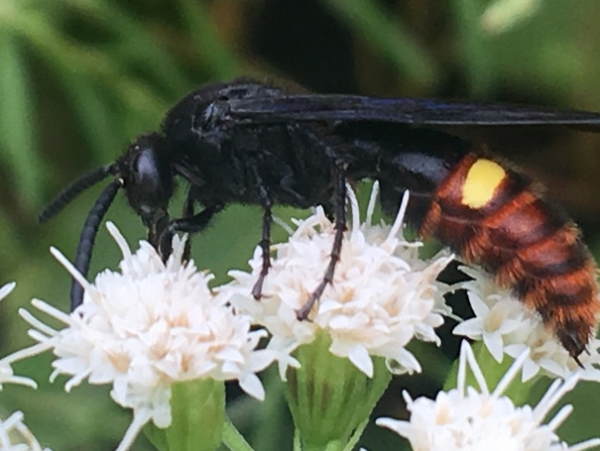 Scoliid wasps, another family, get characterized as beneficial insects because they help control green June beetle and other grubs that can cause lawn problems. Scoliid wasps are present in North Carolina from June to October. However, they are most abundant during August because that’s when the life cycle of beetle grubs has them closest to the surface of the soil. Female Scoliids fly across lawns search for the grubs. They can also be seen literally walking around the soil actively hunting.

Up to five different Scoliid wasps can be found in the state. 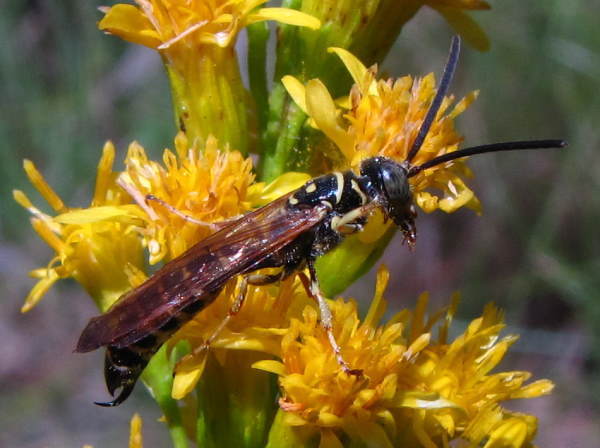 Not much information on Thynnid Wasps (Family Thynnidae) exists on the internet. It’s a very small family in the United States with about one dozen species. According to a 2009 article called, Taxonomic Purgatory: Sorting Out The Wasp Genus Myzinum Latreille In North America ten of the species belonged to the Myzinum.

I bring this up because one of the species, Myzinum carolinianum, bears the Carolina name, and it, along with an additional three, maybe four species, are found in the state. The picture shows Myzinum quinquecinctum. Note the thin body. Males have that hook like appendage at the bottom of the abdomen. For individuals interested in additional formal information the following quote was taken from the aforementioned article. 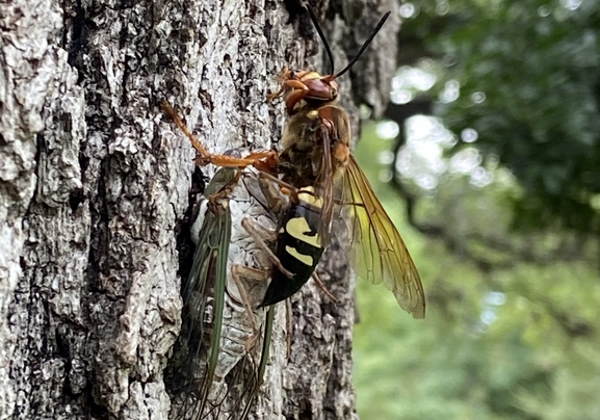 The Crabronidae family consists of many familiar wasps with common names such as sand wasps, beewolves and square headed wasps.

Many of the Sand wasps, Tribe Bembicini, prey on flies, so they definitely can be considered beneficial insects. Because of their large size, Eastern Cicada Killers might be the most easily recognized of the species. As the name suggests, it preys on Cicadas. Adult wasps can be seen from July through mid-September.

Bees evolved as the vegetarian versions of the Crabronidae.