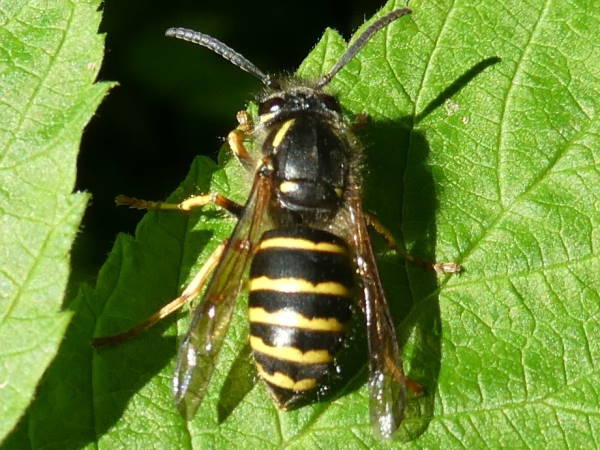 This brief overview of Vermont wasps focuses more on the types of wasps found in the state. The green Wasps button leads to addition pictures and information covering a larger variety of species in each of the types presented for individuals interested in more wasp identification help.

Fortunately, a very small percentage of the state’s wasps are considered dangerous stinging wasps. Yellowjackets probably rank at the top of the list as the most recognized stinging wasp pests. Typically they are divided into two types, ground and aerial, depending on the nesting habits. Vermont hosts both types and sometimes it helps to be able to differentiate between the two in order to locate nests in the yard.

The picture at the top of the page shows the Northern Aerial Yellowjacket with a black body and fairly uniform yellow stripes on the abdomen. 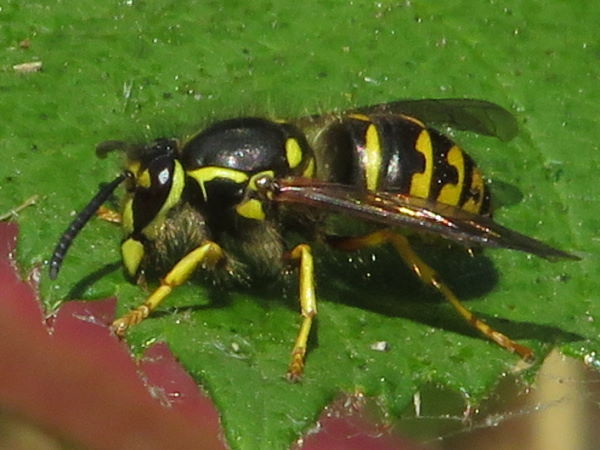 The yellow pattern on the abdomen of the Common Aerial Yellowjacket is a bit more pronounced, making it fairly easy to tell the difference between the species. 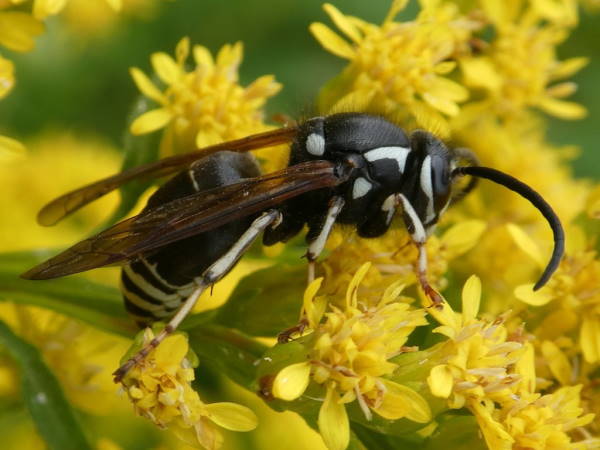 A few of the so-called yellow jacket wasps go by the common name Blackjacket because they have black bodies with white stripes or patterns. The Bald-faced Hornet is probably the most well known of the species. It’s also an aerial species.

Interestingly enough all the aerial yellowjackets presented here tend to build similar looking, somewhat rounded nests. Typically the Bald-faced Hornet nests are much larger than the others and they are situated higher in the trees. Common Aerial Yellowjacket nests might be only four inches long in some instances, and build in shrubs closer to the ground.

Vermont also hosts ground nesting species including another with the common name Blackjacket (Vespula consobrina) . Compared to the Bald-faced hornet, they have an increased number of white lines and patterns on the abdomen.

Eastern Yellowjackets are probably the most common of the ground nesting yellowjackets in the state. The presence of an anchor-shaped black mark in the middle of the first yellow line on the abdomen is the best field identification clue. German Yellowjackets have also been documented in the state. 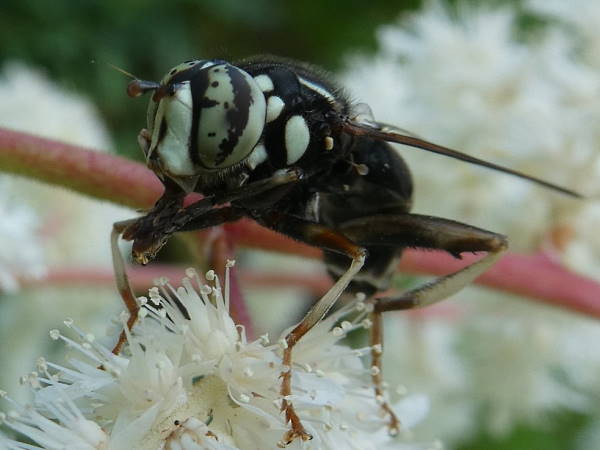 Wasps have many mimics in the fly world. Don’t be fooled. The picture shows an insect that, at least face value to the average person, looks like a Blackjacket or Bald-faced Hornet. The eyes give it away. It’s a Bald-faced Hornet fly. 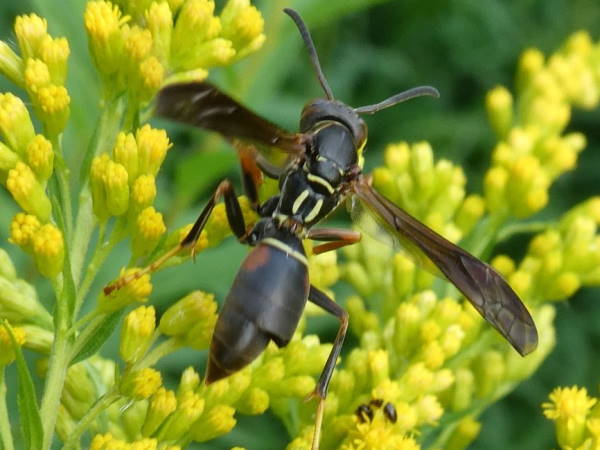 Paper wasps abound in the state with the queens coming out of hibernation with the springtime thaw. The Dark Paper wasp is probably the most common species. Like all paper wasps they build umbrella shaped nests around the home and can create a problem during the warmer season if they suspect humans are too close to their nests. For concerned individuals, removing the nests during in the building stage is the best way to deal with them.

Finally, not too long ago the first ever European Hornet was documented in the state. It’s been in the United States for well over one hundred and fifty years. Perhaps it’s been in Vermont for some time and not seen. Conversely, it could be that a warming climate means the more northern areas of the country are becoming more habitable to them. They are much larger in size than the typical yellowjacket. 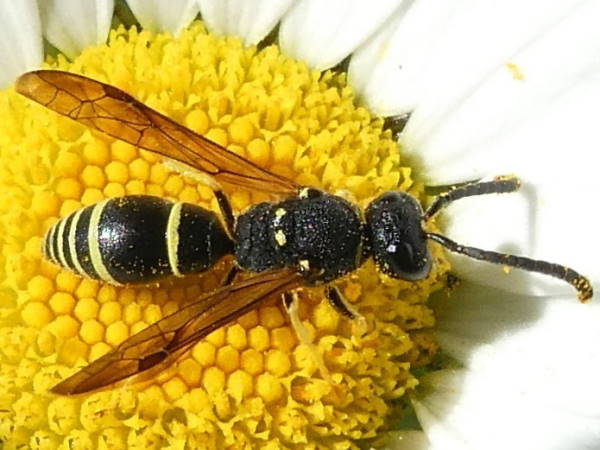 Potter and Mason wasps also belong to the same family as the vespids. They don’t get categorized as stinging pests. 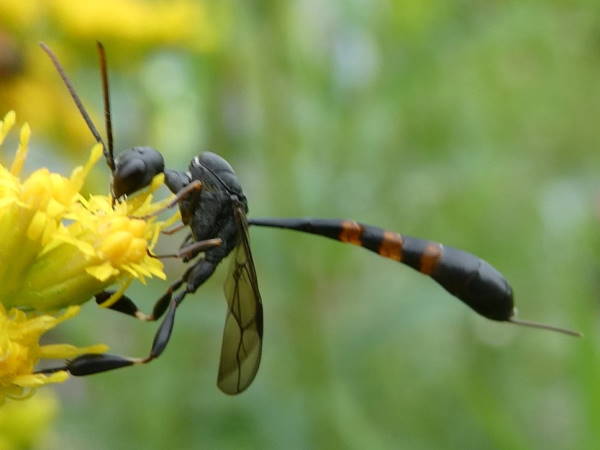 There’ an entire group of fairly benign wasps that fit into a catch all group called Parasitoid Wasps, consisting of around one dozen different superfamilies. The wasp in the picture might easily be mistaken for an Ichneumonid wasp. A closer inspection of the legs reveals a Carrot wasp. 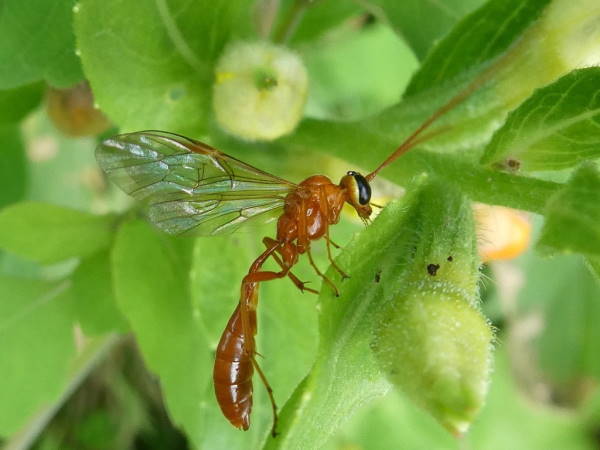 Braconid and Ichneumonid Wasps are, no doubt the most well known of the Parasitoid wasps. Some are large, some are small. Females are easily recognized by the presence of an ovipositor extending from the abdomen. Males lack they do they sting. In fact, they get categoried as beneficial insects because they feed on many types of insect pests. The wing pattern, differentiated the two groups. They ten to have very long antennae. 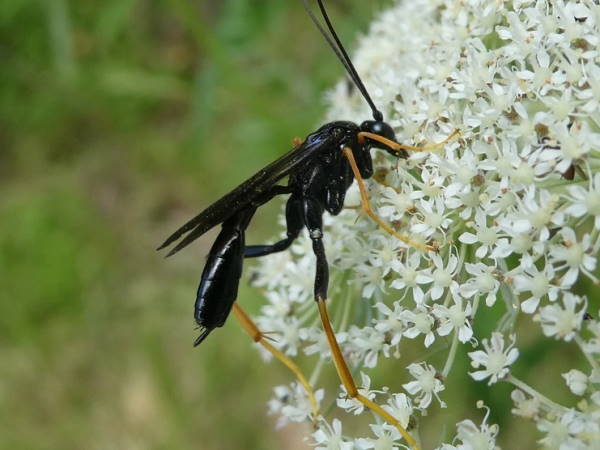 With at least five thousand species documented in North America, getting an id down to species level is mostly for professionals. Here’s another specimen, probably in the Banchinae subfamily. Individuals interested in documenting species can easily find dozens in their area of the warm summer months. 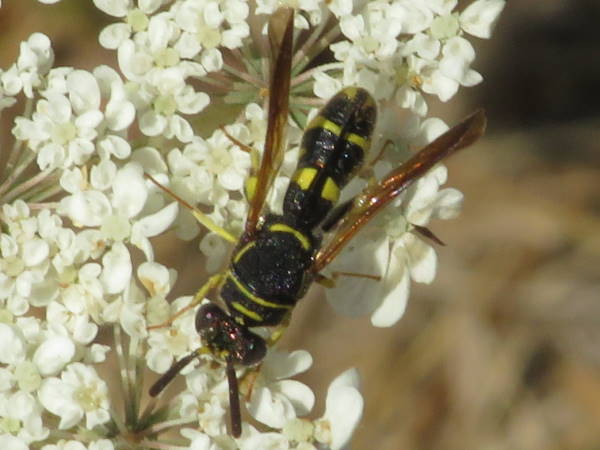 Another large superfamily of Parassitoid Wasps, Chalcidoid Wasps, consist of over two thousand species. Since some species can be used as biological pest control agents, entomologists pay some attention to them. The picture shows Leucospis affinis, a common species that shows up in nectaring on flowers during the summer. The enlarged leg is a good field identification clue. 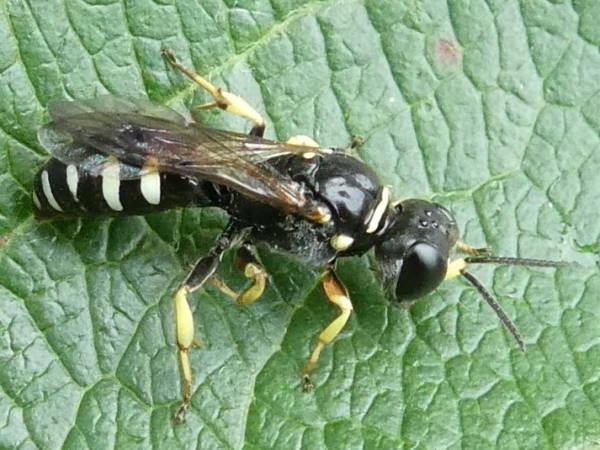 I bring this up because the often black and yellow body along with the small size, means it resembles many of the small yellow and black wasps in the Crabronidae family that also visit flowers during the same time. Crabonidae consistsof many familiar wasps with common names such as sand wasps, beewolves and square headed wasps. They are related to bees, except of course for the fact that bees evolved to be vegetarians and the wasps in this family prey on other insects. The picture shows a square headed wasp. 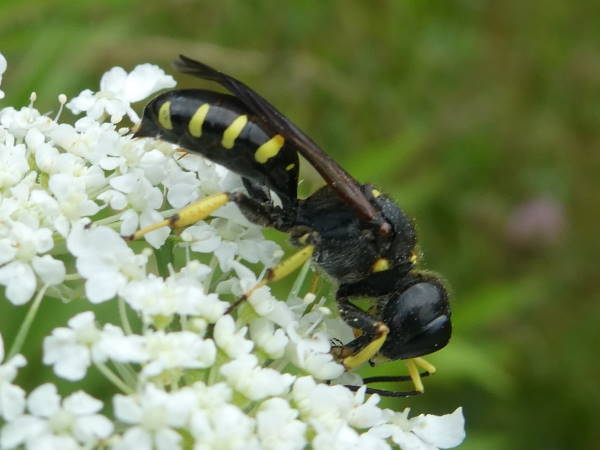 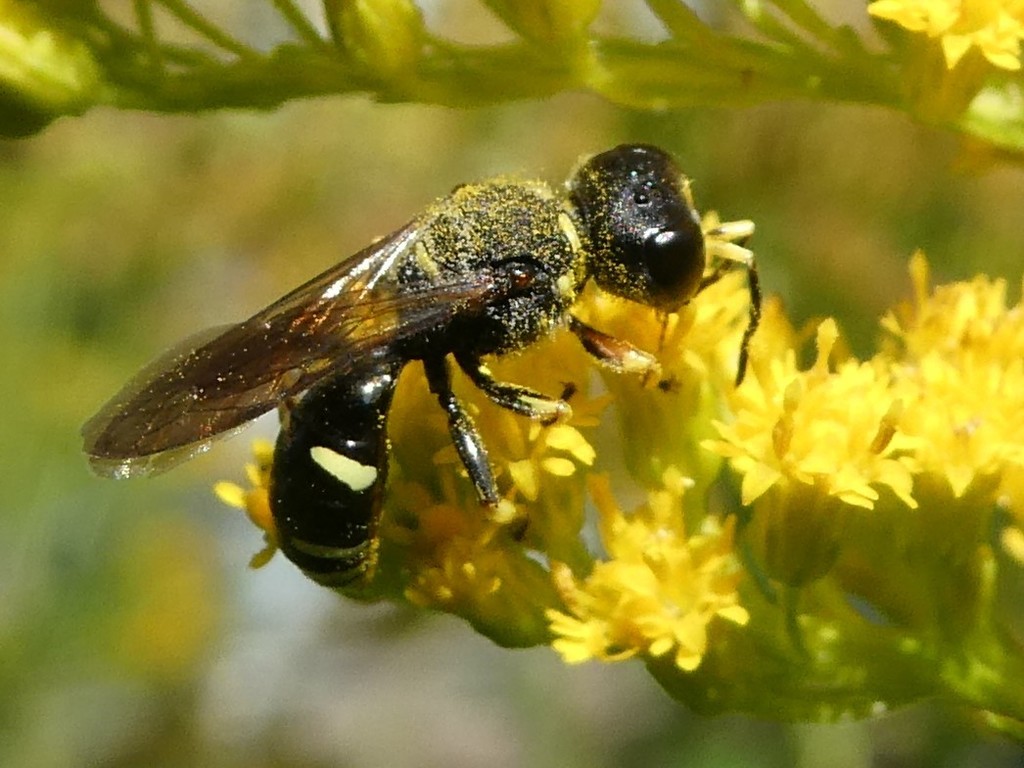 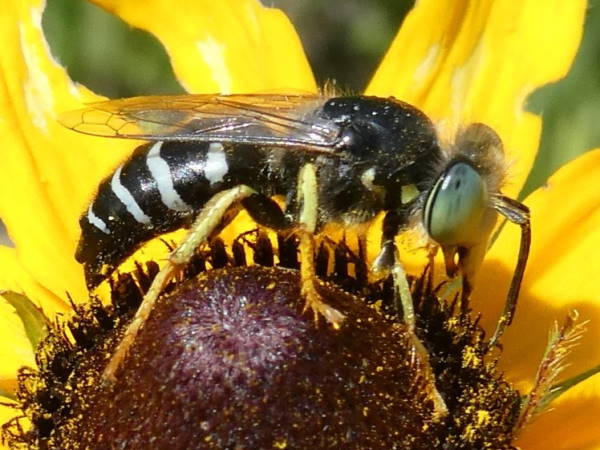 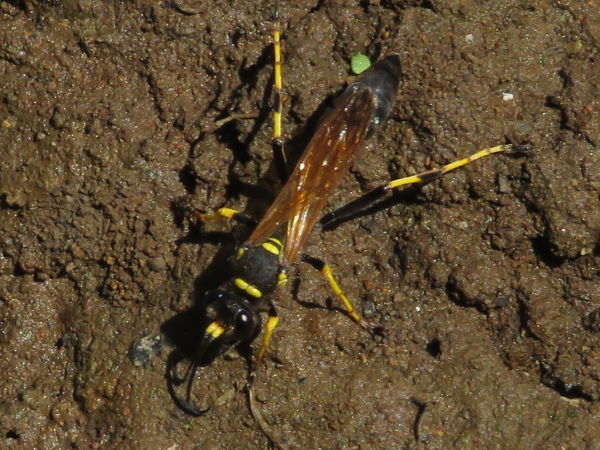 Thread-waisted wasps might be some of the easiest wasps to identify by family because of the long, thin body part that separated the thorax and abdomen. Many of the medium sized wasps appear in residential areas around the state, making them some of the most easily seen wasps around the home and garden. Their common names such as mud daubers and digger wasps reflect their nest building techniques. The picture shows a Yellow-legged Mud Dauber.