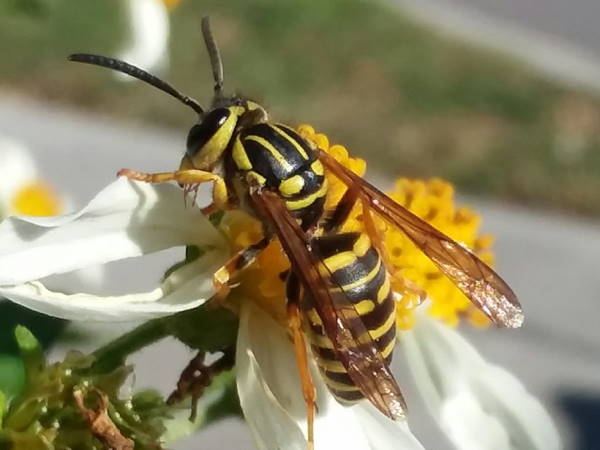 Welcome to the world of Georgia wasps, where, with a few exceptions, it’s a wonderful world filled with a seemingly endless group of insects that contribute to the well being of residents throughout the state by providing benefits such as natural pest protection and plant pollination.

From a practical point of view, it’s not unreasonable to suggest that during the wasp season, the average person can easily find forty to fifty wasp species covering the most common wasp families. With a decent camera, photographing them begins by paying attention to the places they live. For example, many wasps flock to some common plants such as the yellow flowers of goldenrod and the white flowers of Queen Anne’s Lace. Checking on them during sunny days is sure to bring up many species.

The wasps links points to additional information on wasp species according to family to help with additional questions.

Health and safety reasons make the stinging wasps of the Vespidae family, commonly called Vespids an important conversation topic. Basically, Georgia hosts a handful of the stinging wasps in the paper wasps, yellowjackets and hornets category. Additionally, the family consists of the potter and mason wasps and they really don’t pose a stinging problem.

The picture at the top of the page shows a Southern Yellowjacket, noted for its ability to keep the nest going year round. A group of Georgia researchers recently published an article Social structure of perennial Vespula squamosa wasp colonies, that examined the phenomena of year round yellowjacket nests. They reported:

V. squamosa colonies sometimes can persist for more than one year … When conditions are favorable, including sufficiently high temperatures and adequate food availability, nests can continue to grow rather than dying off in the winter. These nests can take on extremely large size very quickly, growing exponentially so that after only two years they may be ten times larger than a typical annual nest… One perennial V. squamosa nest contained ~475,000 cells.

The possibility of close to half a million yellowjackets showing up as uninvited guests to picnics year after year sound a bit unpleasant. So it’s generally a good idea to remove the nests as quick as they are detected. 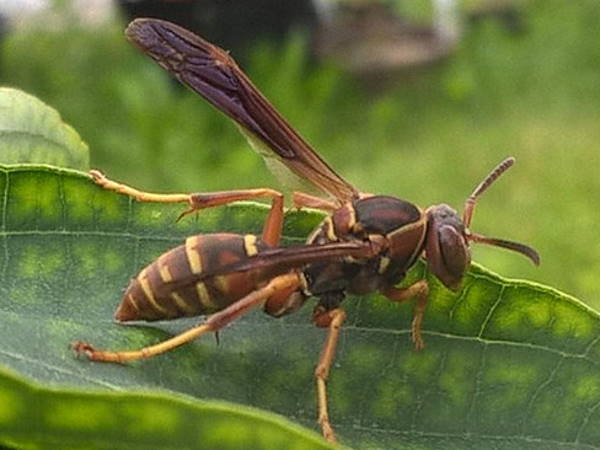 Nest size is a good starting point for comparing paper wasps and yellowjackets. On average, paper wasp nests can be at least ten times smaller than yellowjackets, with an upper limit population level below five hundred adults and young. Because they can attack in groups to defend the nest, they can be a nuisance around the house. Removing nests around the home during the spring nest construction season can be a successful proactive measure in many instances. 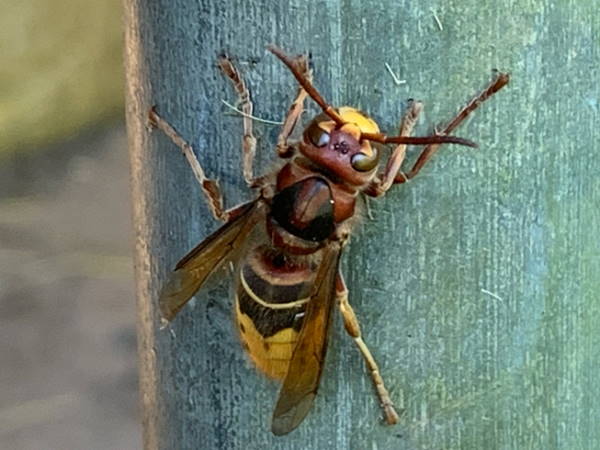 Northern Giant hornets, with the nickname murder hornets were recently introduced into the Pacific Northwest. Their large size, strong sting and propensity to attack honeybees as prey causes concerns with both the agriculture industry that relies on honeybees as pollinators and the average citizen concerned with another stinging wasp.

Fortunately, their range is currently limited to a small area in northern Washington state. Georgia hosts another introduced hornet, the European hornet. It’s smaller than the Northern Giant, and it has been established in the United States for well over a century. Their nest building habits, typically inside tree openings, also serve as good long distance identification tools. While most populations inhabit Georgia forests, residential buildings with openings between the wooden portions can also serve as good nesting spots. 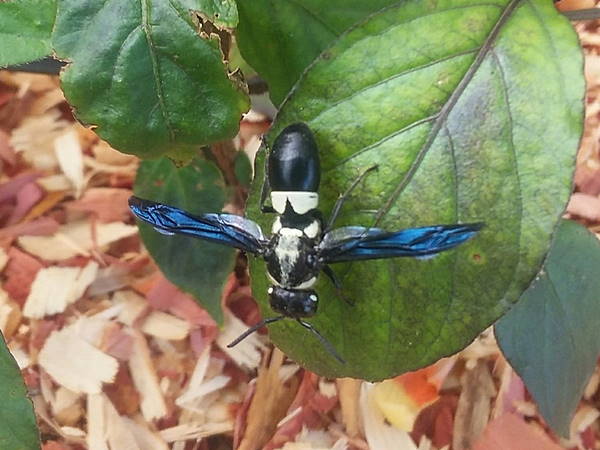 Potter and Mason wasps, the solitary wasps of the family, are more numerous in species numbers and less a stinging concern. Some are easier to identify than others. The next two pictures show very similar looking species. The first, Euodynerus bidens, is less common and the white spots on the back of the eyes are good identification clues. 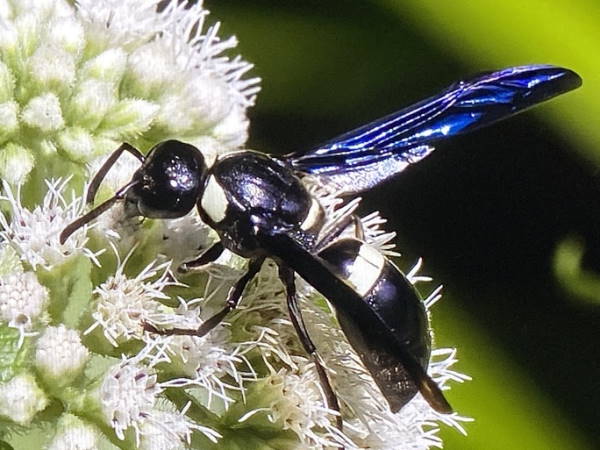 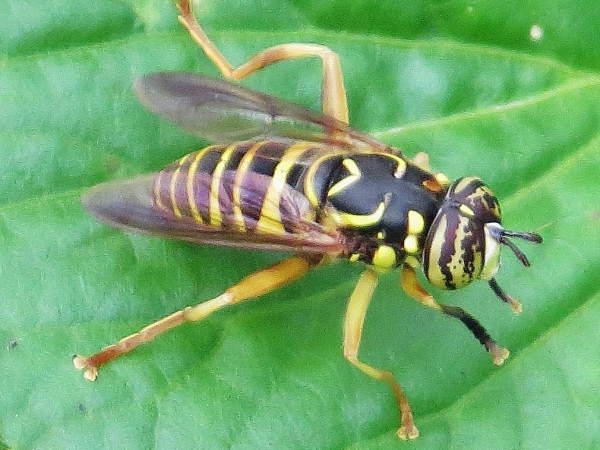 Finally, wasp mimics abound and a close look at the Eastern HornetfFly reveals one typical type of fly antenna.

For identification purposes, taking the vespid family as a whole, a variety of physical characteristics such as body colors, patterns and size can help with species identification. 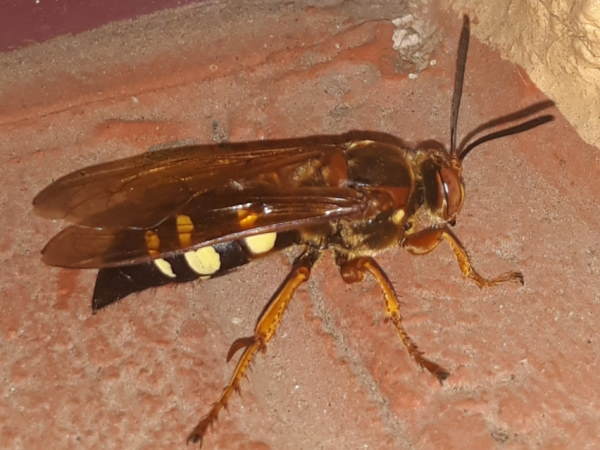 Speaking of size, the Eastern Cicada Killer’s large size helps it stand out among the Georgia Crabronidae species. Other members include species that go by familiar names such as sand wasps, beewolves, weevil wasps.

Like many Potter and Mason wasps, Beewolves and Weevil wasps, are smaller in size with physical features such as yellow markings on the body. Attention to physical details helps with identification among and between wasp families. 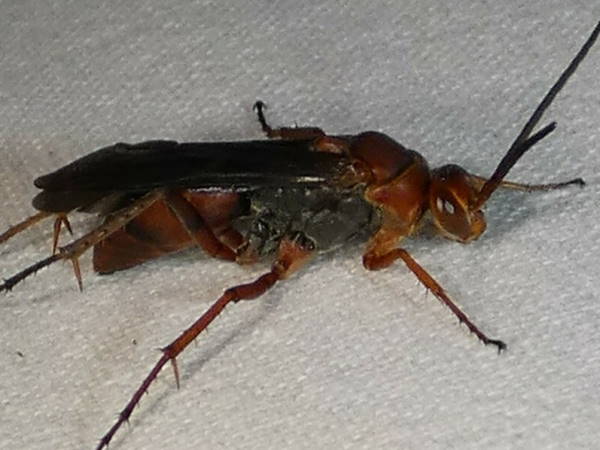 Physical features also sometimes explains some wasps’ nicknames. Others, like spider wasps get their nickname based on their prey. Spider wasps are found anywhere spiders are found. In other words, they inhabit all of Georgia. Identifying them at the level of genus can often be straightforward, based on some physical features such as body color. 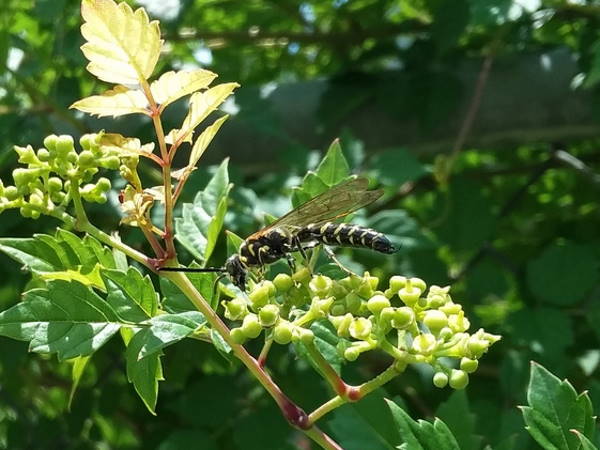 Large patches of brown or dead grass spots across the lawn can be attributed to the presence of lawn grubs from common beetle species such as June bugs. Two wasp families, the Thynnid and Scoliid wasps use beetle grubs as their prey of choice and therefore their presence in yards can serve as indicators of lawn problems. In instances where the dead grass spots are limited, their presence can also be considered as natural pest control help. 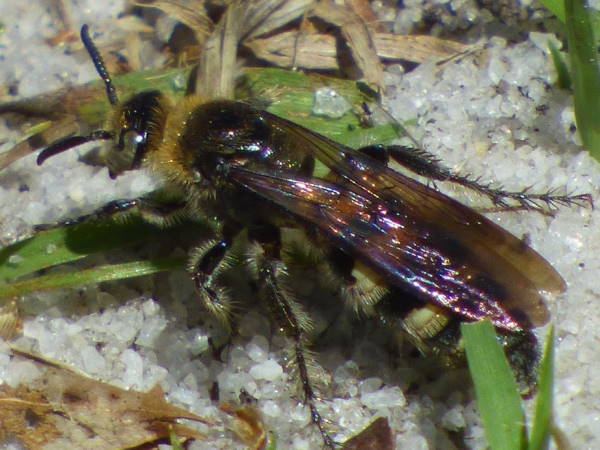 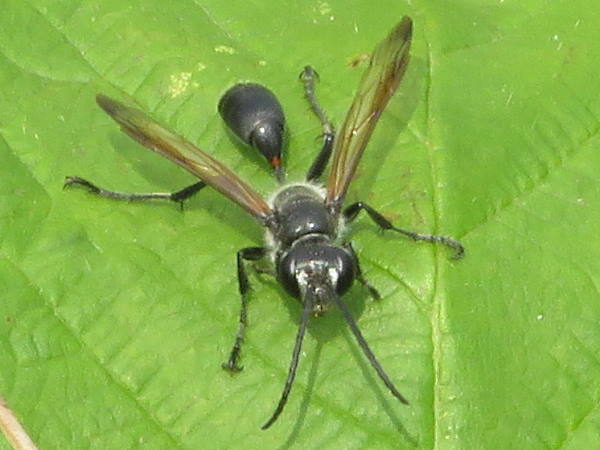 The couple dozen Thread-waisted Wasps in Georgia catch the eye because their above average size makes them easily noticed in the yard and garden.

Many of these wasps have black bodies, and sometimes other physical features such as body hair color provides identification clues. The white hairs on the almost totally dark body of the wasp in the picture suggests it’s the Mexican Grass Carrying wasp. The nickname derives from it nest building method. 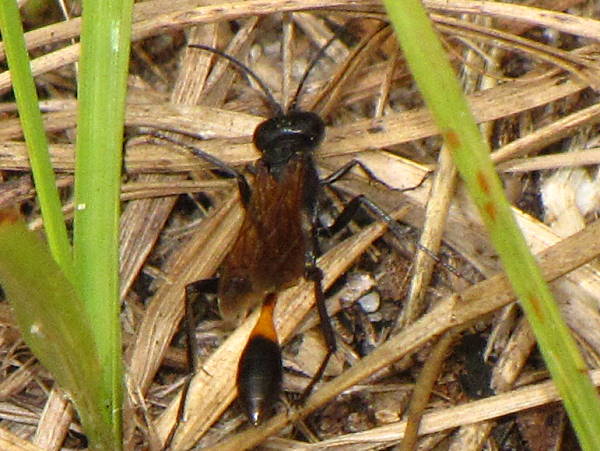 Other common wasps such as the Ammophila also have long, slender waists. Ammohila pictipennis, in the picture, is one of many Ammophila species with some combination of red and black bodies. The orange is the wings serves as a good ID clue for this common species. 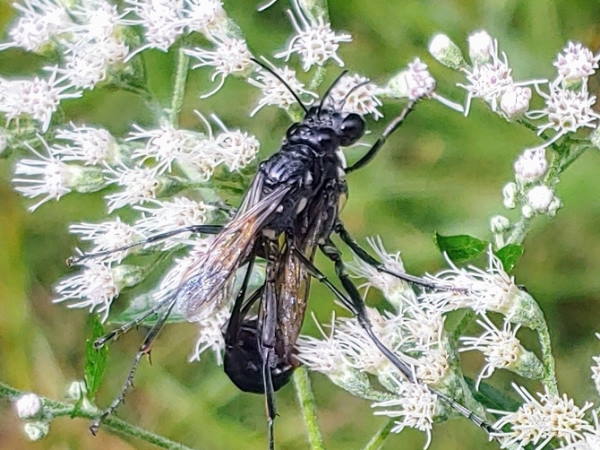 Eremnophila aureonotata, the only member of it’s genus, is related to the many Ammophila species. Nicknames, the Gold-marked Thread-waisted Wasp, the black body stands out. 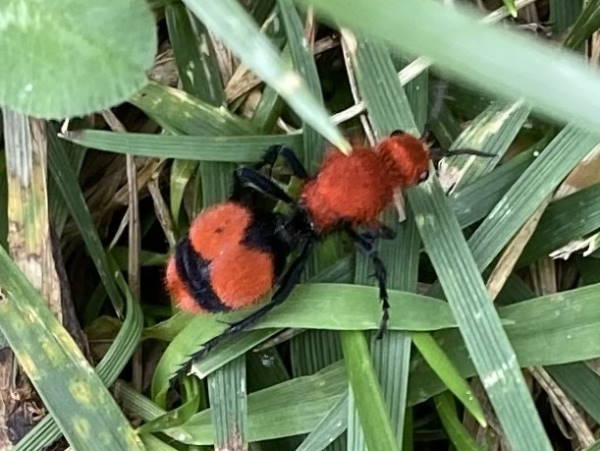 Velvet ants are probably the only other group of wasps that potentially cause problems with stings. Females are wingless and resemble large, fuzzy ants. Males have wings. The Common Eastern Velvet ant has a nickname, Cow Killer, referring to the pain associated with the sting.