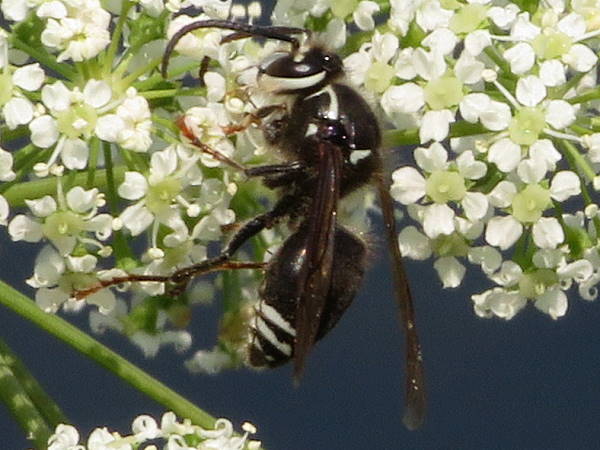 Identification of New Jersey wasps can be an easy or difficult task, depending on the reason for identification. For example, the average resident of the state might want to know more about the wasps, especially the stinging wasps around the neighborhood. Fortunately, identification of those species is straight forward.

On the other hand, with well over one thousand wasp species in the state, professional entomologists need patience and a good microscope to sort through the many species that rely on close examination of body parts for identification.

This introduction focuses on three of the more easy to identify groups or families of wasps commonly seen in residential areas. The wasps links points to additional information on wasp species according to family to help individuals with additional questions. 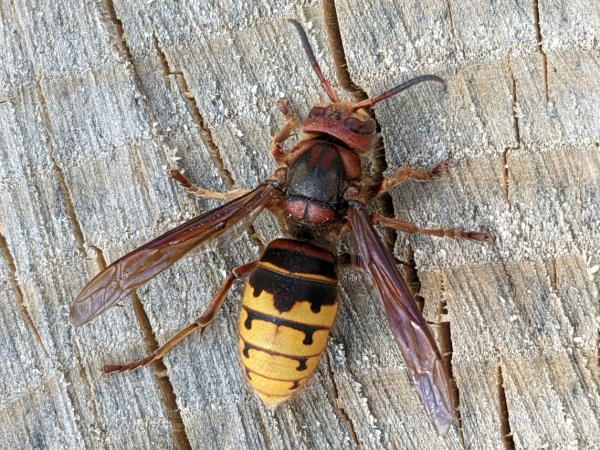 Yellowjackets, hornets and paper wasps belong to a larger family, Vespidae family. Social wasps, they build large nests and practice collective defense to the dismay of any person or animal thought to be a threat to the well being of the colony.

A couple of recent research articles examine the evolution of their eusociality, with a focus on three separate and complementary methods:

In the long term evolutionary scheme of things, vespid evolution gets dated to one hundred and sixty six million years ago. Their colony nesting choice, both above and below ground looks to be a first line defense of the predators of the day such as small reptiles and mammals.

Over time, as new predators such as ants, birds and more mammals began to share similar territories, their second line defenses kicked in. For example, some wasp species evolved to secrete sticky substances to trap any nearby scout ants, thereby deterring colony attacks. Human introduction into their environment came roughly one hundred and sixty million years after the Vespidae, suggesting humans were close to last in a long list of predators. First line defense efforts such as nest placement often work to deter human interaction. When that fails, as many people have noticed over time, they can attack and sting in groups.

About a dozen yellowjacket and hornet species and a dozen paper wasp species are present in the state. The picture at the top of the page shows a Bald-faced hornet. The name might be a bit misleading because it’s one of the aerial yellowjackets. Seeing them around a residential area suggests the presence of a large nest in the nearby trees.

The picture at the top of this section shows the European hornet, an introduced species from Europe. They are also aerial nest builders. However, their nesting sites of choice have traditionally been in hallowed out trees. The Pine Barrens serves as excellent European hornet habitat. In some instances they can be found in urban areas where wood structures also provide adequate nest sites. 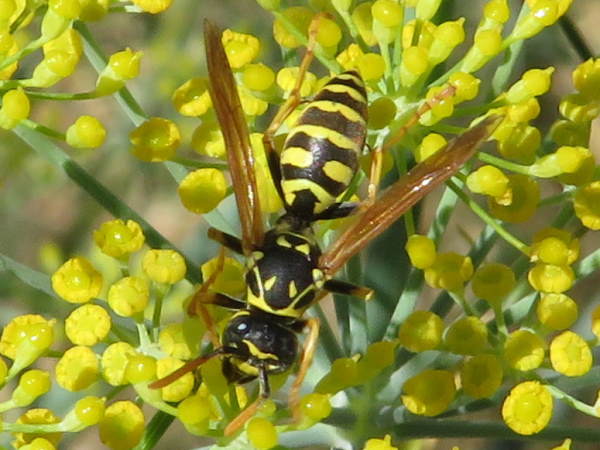 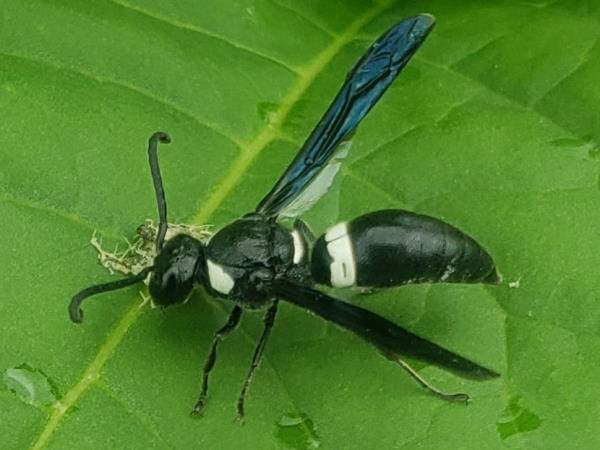 Beneficial and less threatening New Jersey wasps far exceed the number of stinging vespids. Potter and Mason wasps round out the family. They are solitary wasps that pose little problems. Almost literally the name explains the nest habit. Potter wasps, for example, build small pot looking nests, each holding one larvae and provisioned with caterpillars. Mason wasps tend to use existing structures, building on the to create separate cells for each of their larvae. The Four-toothed Mason wasp is one of the larger species and it’s found in gardens across the Garden State. Urban areas also host many species. It’s not unusual to find their smaller nests around window sills and other building parts. 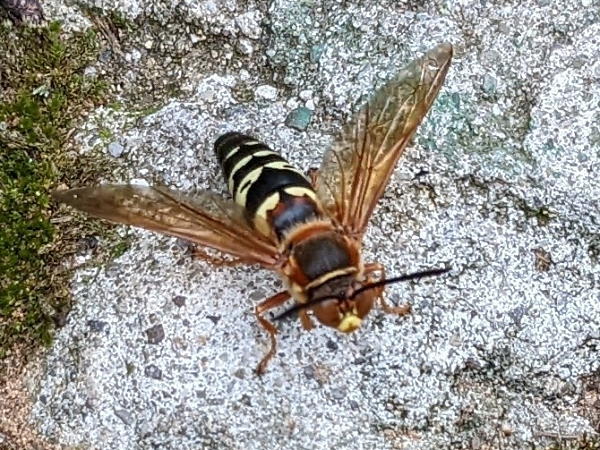 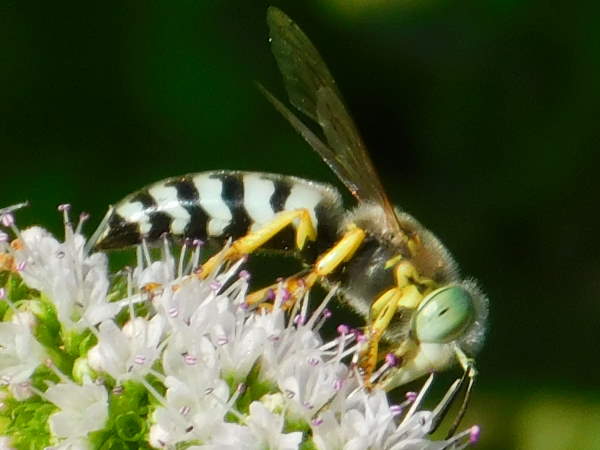 Additional wasps with more common name such as sand wasps, beewolves, weevil wasps also fit into the Crabonidae family. The common name sand wasp suggests that the New Jersey coastline areas support a variety of species. In fact, many areas of the state, especially in the southern half of the state consist of sandy soils, and are suited to many species. 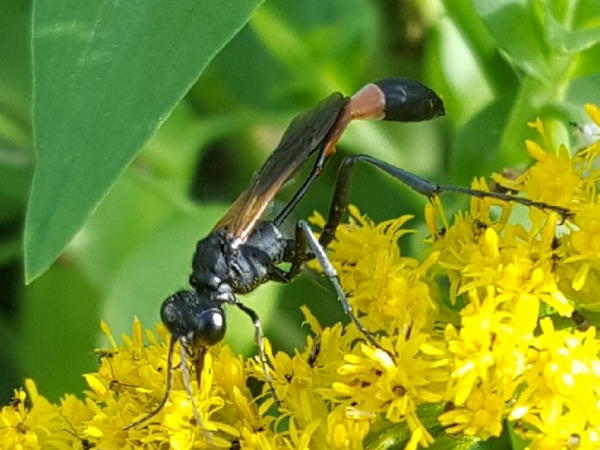 Additional wasp species from different families also use sandy soil for nesting. The large size of Ammophila, a genus of thread-waisted wasps, makes them easily spotted. The picture shows Ammophila pictipennis, and it can often be identified by the orange on the wings and the lack of any markings on the side of the thorax. 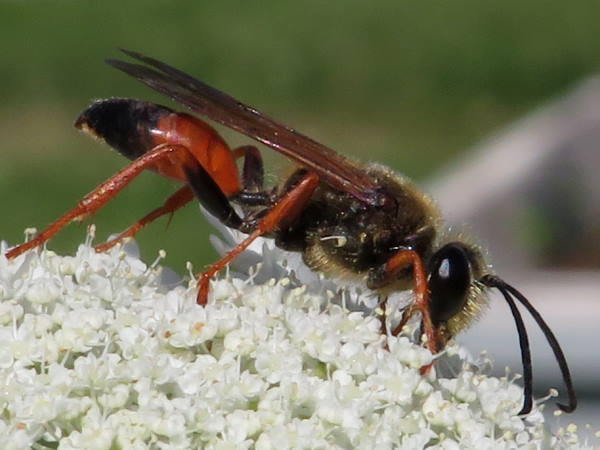 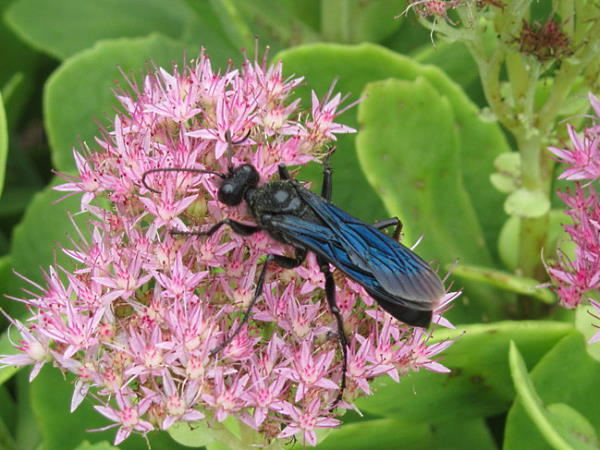 A larger than average size and closed wings at rest usually serve as the ID clues for the great Black Digger wasp, another common Sphex species. If the legs are brown think Katydid wasp (Sphex nudus). 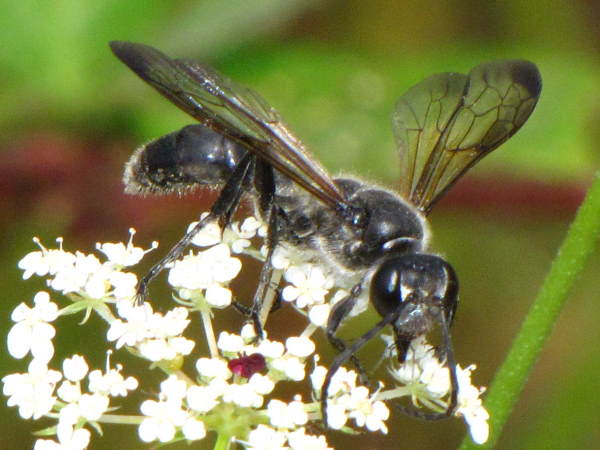 Grass carrying wasps adding some complexity to thread-waisted wasp identification. Many of the species also have black bodies. Sometimes wing color and position along with body hair can help with identification. Tor example, the picture shows the Mexican Grass Carrying wasp. The white hair on the body is a good way to differentiated it from the other species with black bodies. A wasp with brown legs that rests with open wings might be the Brown-legged grass carrying wasp. 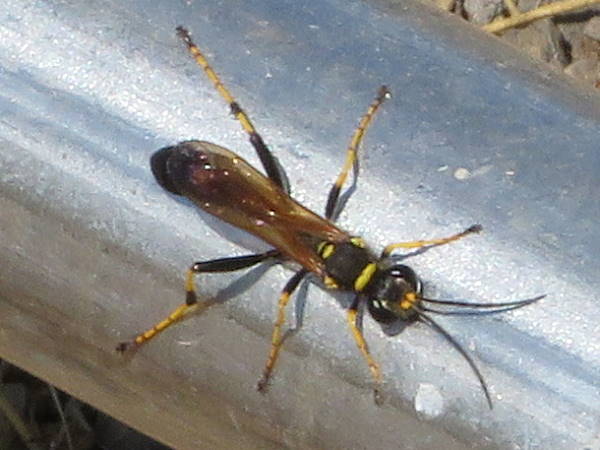