Skip to content
Wasps Somewhere in the bowels of an entomology department in the state their is a list of all the Virginia wasps. Considering the fact that many of the surrounding states have documented over one thousand wasp species, it seems reasonable to suggest that the number serves as a good starting point for discussion.

This brief overview of Virginia wasps focuses more on the types of wasps found in the state. The green Wasps button leads to addition pictures and information covering a larger variety of species in each of the types presented for individuals interested in more wasp identification help. 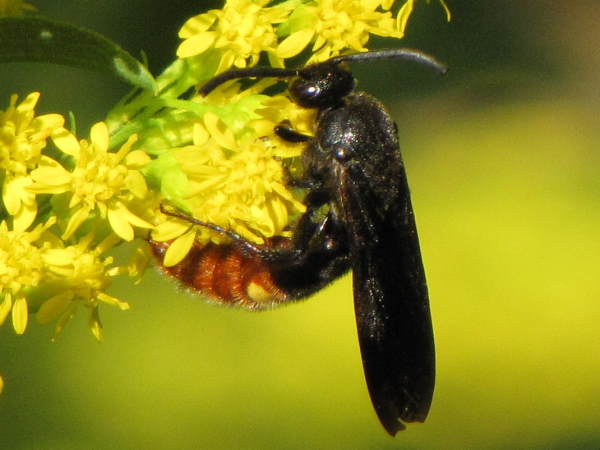 Fortunately, a very small percentage of Virginia wasps are considered dangerous stinging wasps. In fact, most are considered beneficial insects because they prey on common insect pests. Take for example the pictured Blue-winged Scoliid wasp. It’s one of four or five Scoliid wasps found in the state. They fly around residential areas during the summer season looking for beetle grubs in lawns and the soil. The grubs are used as food for their larvae. All the native Scoliid wasps are known for their bright spots on the abdomen. 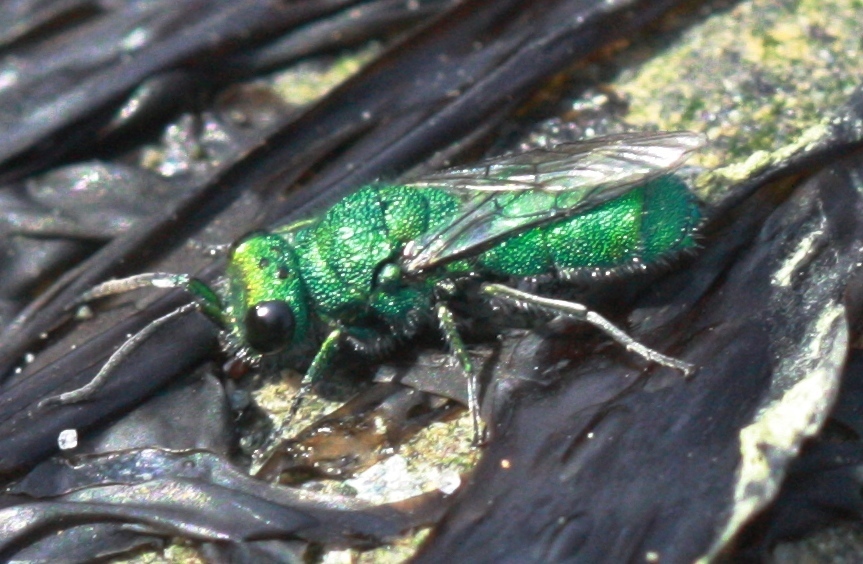 One of the least abundant and least threatening of the wasps is the Cuckoo Wasp. They are small., usually less than one-half an inch in length, and covered by a heavy armored coat of metallic green or blue colors. That makes them easy to spot on the flowers. In some ways they resemble sweat bees, although at close range their body is also covered with dense pits and ridges. 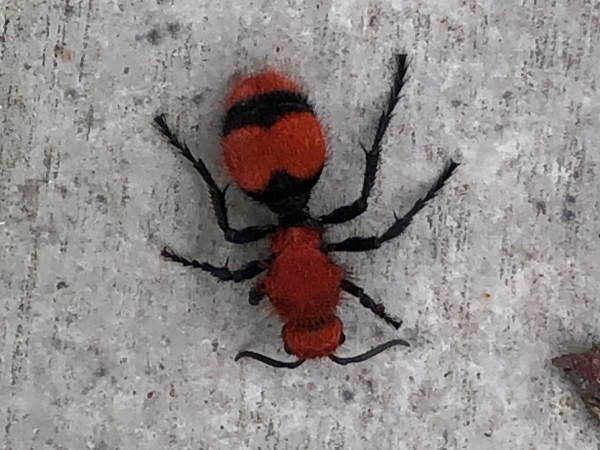 Think ouch when you see a Common Eastern Velvet Ants. Actually they are not ants. Rather, they are solitary parasitic wasps and get the common name ant due to the wingless females. They run rapidly over the ground by day in search of the nests of other wasps or bees, breaking in and laying an egg in any cell occupied by a host larva or pupa. The sting of the female can be painful. In fact, one species has the nick-name cow killer. 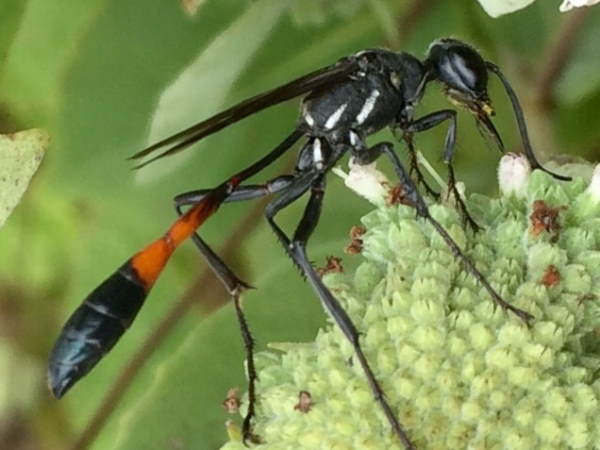 Virginia also hosts many thread-waisted wasp species. As a group they can be identified be the thin, extended waist. Two of the species shown here are related. The first picture shows a species with a long, thin black and red body. It’s probably Ammophila procera, a common Eastern Species, often identified by the bold silver dashes on the thorax. With over sixty species in the United States, it’s probably never a certainty to identify any Ammophila species based only on a picture. 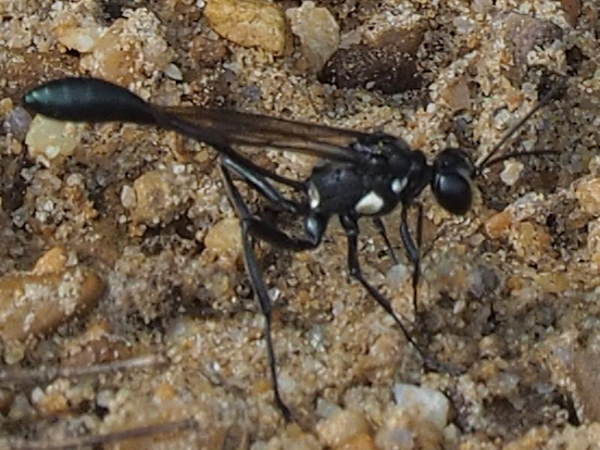 Closely related to the Ammophila, the Eremnophila aureonotata is the only species in its genus. The thin, black body with silver patches on the thorax make it much easier to identify. 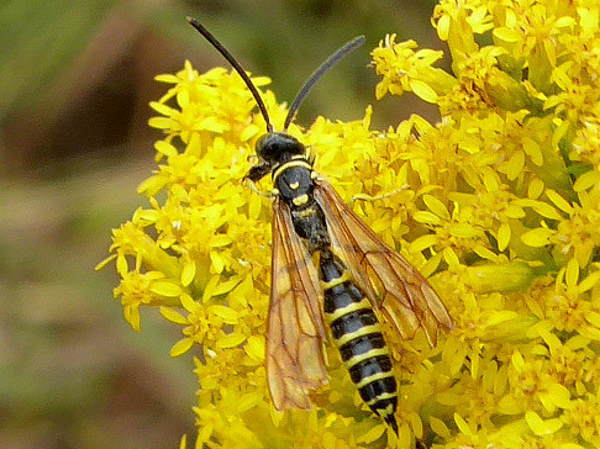 A few Thynnid wasps are also fairly common in the state. Males and females look different. Males have a thinner body, and what looks like a hooked stinger at the bottom of the abdomen.

Adult wasps of both genders have been recorded from twenty-two different species of flowers, mostly in the parsley and sunflower families. Until recently, this genus was placed in the family Tiphiidae, and this is reflected in older reference material. The picture shows Myzinum quinquecinctum. 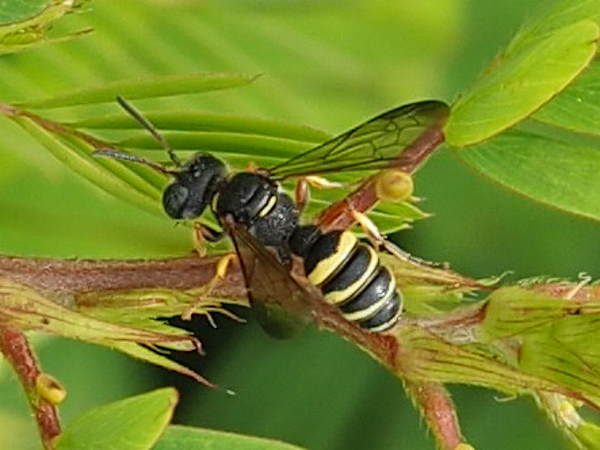 The Crabronidae family consists of many familiar wasps with common names such as sand wasps, beewolves and square headed wasps. They are related to bees, except of course for the fact that bees evolved to be vegetarians and the wasps in this family prey on other insects.

Many of the Sand wasps, Tribe Bembicini, prey on flies, so they definitely can be considered beneficial insects. Because of their large size, Eastern Cidada Killers might be the most easily recognized of the species.

Weevil wasps, like the one in the picture, might not be the most commonly identified species, primarily because so many small wasps have black bodies with yellow stripes. A closer look at the picture shows the wasp also has a constriction at the top of the abdomen. That’s a good field identification clue for the many different Weevil wasps in the state. 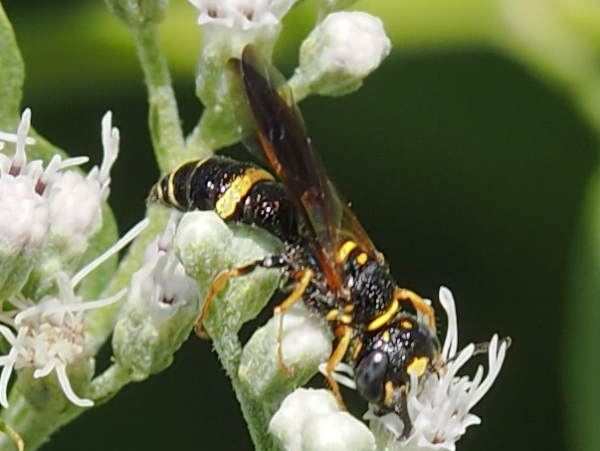 Compare it to the Humped-back Beewolf, a related member of the Crabronidae family. Both have black bodies with yellow stripes. Of course the patterns are different. However the Beewolf does not have the constriction at the top of the abdomen. Plus the body looks rough, or has pits all over it. Those are fairly good field identification clues for Beewolves. 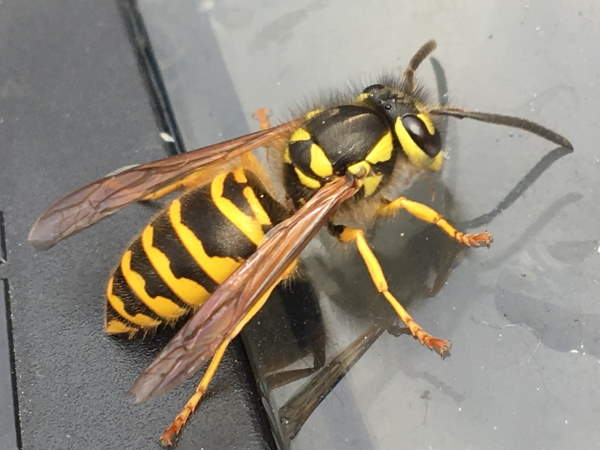 The half dozen or so Virginia Yellowjacket species divide into ground nesting and aerial nesting categories. That’s important for homeowners interested in effective yellowjacket pest control.

Of the four ground nesting yellowjackets, the Eastern Yellowjackets might be the most common. They usually build ground nests. However, they can also build nests in open spaces in walls or beneath the home. In these instances, it’s a good idea to call a professional pest control company. Look for a black anchor mark on the top of the abdomen as the best field identification clue.

Common Aerial Yellowjackets and Bald-faced hornets are the two species of aerial yellowjackets that might cause problems around the house. Fortunately, unless the nest is disturbed, they don’t usually cause as many problems.

European Hornets are the only true hornets in the state. They tend to be around forested residential areas. Adults resemble yellow jackets, with a brownish red body and yellow abdomen. Queens, which may be seen in the spring, have more red than brown, and are larger than the workers. Nests are typically built in hollow trees, but they can easily become pests when found in barns, sheds and open spaces between walls. That’s especially true with more mature nests that can host up to five hundred or more individuals. 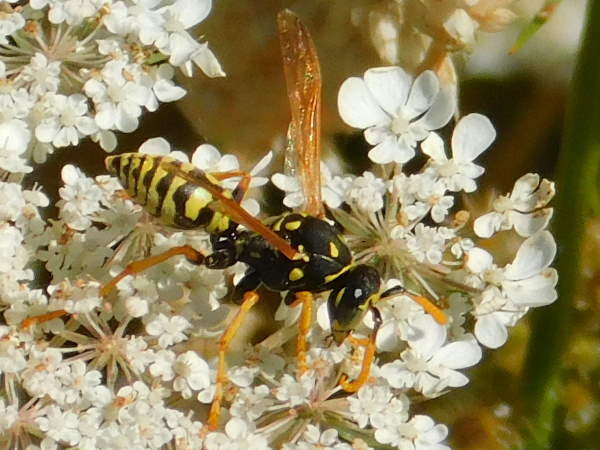 Ten or more paper wasps are documented in the state, and they are all considered both beneficial insects and potential pests. First, the good news. Paper wasps use caterpillars and other pests as their larvae food, so they provide free natural pest protection in their territory. However, their territory might be under the front entrance door or the mail box, and because those are typically high traffic areas for humans, the possibility of disrupting the nest and causing a defensive attack by the colony increases.

Because all the species build umbrella nests, knowing how to identify paper wasps in Virginia turns into more of an educational task rather than a pest control issue. Interestingly enough, unlike the yellowjackets, any female paper wasp can begin building a nest and starting a colony.

The picture shows a European Paper Wasp – This insect is native to Eurasia and northern Africa. It was first noticed in the U.S. in Massachusetts in the 1970s. It arrived in Cincinnati about 1990 and quickly becoming the second most common urban paper wasp behind the Northern Paper Wasp. The colorful Guinea Paper Wasp (Polistes exclamans) is presented in the video at the top of the page. 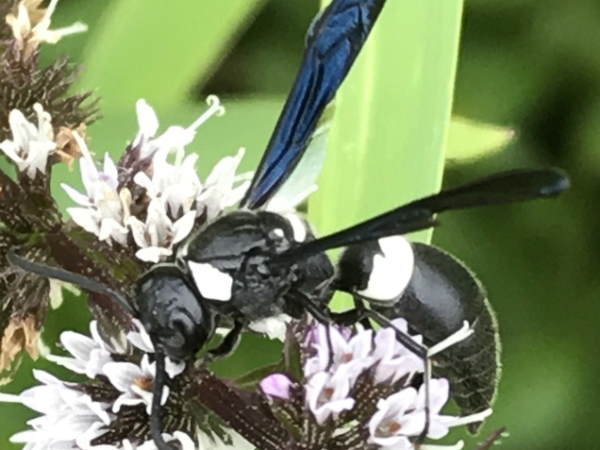 Potter and Mason wasps also fit into the Vespidae family, and by a wide margin, they are the most common in terms of number of species. Anywhere from four to five dozen species fly around the state during the season. They get their common nick name because some will dig into the mortar between the bricks. Others build ground nests. Consider them more beneficial than pest insects because while they might sting if disturbed, their solitary nature means that unlike their relative the yellowjackets and paper wasps, they don’t attack in large numbers.

Some are easier to identify than others due to the presence of a constricted abdominal part that links the thorax and abdomen. The Fraternal Potter Wasp is one example. The remaining species generally have black bodies with either yellow or white markings. They grow to about one-half inch in length.