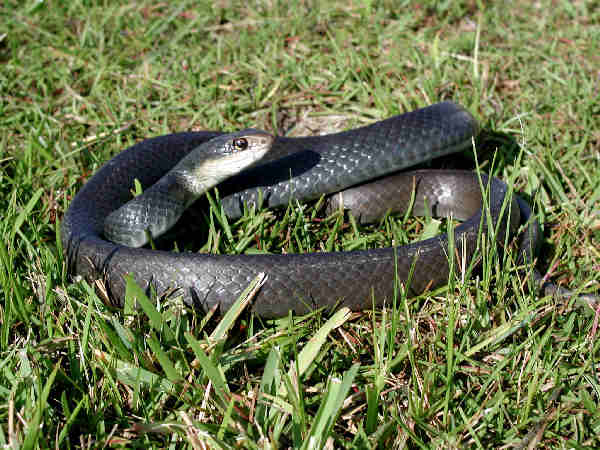 New Jersey snakes consist of approximately twenty species, with the number going up a bit depending if subspecies are counted. New Jersey herp fans can also be enthusiastic about the fact that about one half of those species can be found throughout the state.

The list of New Jersey snakes includes two venomous snakes, the Copperhead Snake and Timber Rattlesnake. Depending on any person’s affinity for snakes, there’s good news and bad news.

The New Jersey copper head snake population continues to dwindle down in numbers, making sightings of the snake few and far between. Look for it in the northern counties such as Sommerset and Bergen. It is listed as a species of concern.

Again, for better or worse, depending on the individual interpretation, Timber Rattlesnakes are listed as endangered in New Jersey. There might be three populations in the north, around the upland areas. It’s also found in small populations in the Pine Barrens.

This articles provides a brief overview of the nonvenomous snakes that residents and tourists meet up with on a regular basis.

It starts with three above average sized snakes with mostly black bodies. Their physical similarity might make for identification confusion.

The picture at the top of the page shows a Black racers (Coluber constrictor). It ranges through all of New Jersey, and yes, it often visits residential areas. They are long thin snakes with a black body, and as the picture highlights, white chins.

Black Rat Snake also can be found in all of New Jersey. They are officially the largest snakes in the state. The all black body makes it a fairly easy species to recognize. 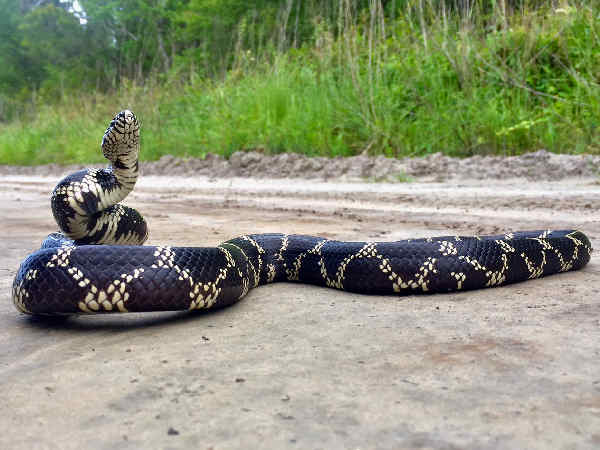 Eastern Kingsnakes (Lampropeltis getula) generally have a black body with with a series of thin white bands down the back. So, the white bands make it easy to identify when compared to the Rat Snake and Black Racer. Southern New Jersey is their normal range.

New Jersey also hosts two Milk Snakes (Lampropeltis triangulum) subspecies. The picture shows their colorful bodies. They are habitat adaptable, living in fields, forests, farms and residential areas. Finding Milk Snakes can be as easy as taking a hike and flipping over a few big rocks or logs. The can grow up to on average about three feet in length and the red to orange to dull rust color of the bands makes them easy to spot.

All Hognose snake species are characterized as having thick bodies that can grow to four feet in length. The upturned nose is always the snake’s defining feature.

Northern Watersnakes (Nerodia sipedon) live in most ponds and lakes in the state. It’s the only New Jersey watersnake species, and although young specimens might look similar to copperheads, the copperhead population is so small in the snake that the odds are high the snake any person sees at the local pond with be a watersnake.

Most New Jersey residents easily recognize the Common Garter Snake. It’s the most common snake in the state and a resident of most residential neighborhoods.

New Jersey is also home to the Eastern Ribbon Snake. They are a bit thinner than the garter snakes. Look for a light patch in front of the eye to help with field identification.

It’s easy to mistake the Scarletsnake (Cemophora coccinea) for a Milksnake or Kingsnake. They are a separate genera and fairly common in the Southeast.

New Jersey also host two of the three Storeria snake, the Dekays Brown snake and the Red-bellied snake. Both are very small and thin, growing less than a foot in length.

Eastern Wormsnake (Carphophis amoenus) is a very small and thin snake that inhabits forested areas in most parts of New Jersey.

Smooth Earthsnakes (Virginia valeriae) are the only representative of the Virginia genera. They also are fairly common New Jersey snakes.