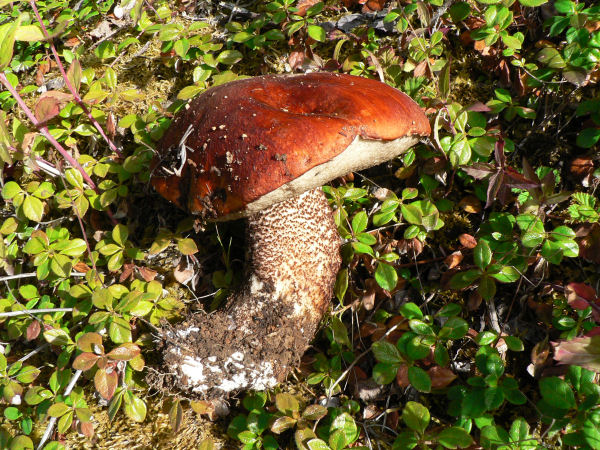 Bolete mushrooms, the common name for mushrooms in the Boletales order, cover an array of families and species.

Depending on whether physical, chemical and/or DNA properties serve as the organizing tool, Boletales classification changes. For present purposes, the term bolete is used rather loosely to refer to mushrooms with pores rather than gills under the cap.

The article provides some pictures and descriptions of representative species in the order to help with basic mushroom identification questions. 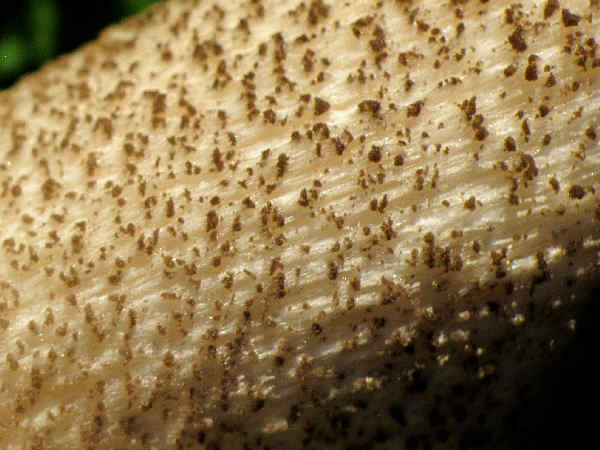 Species in the Leccinum genus often go by the common name scaber-stalks. The first two pictures show a mature mushroom and a close up of the stem that highlights the short, dark, hair-like projections. Scaber-stalks can pop up in residential areas as well as forested areas, where ever their associated trees, such as aspens and cottonwoods or birches, grow. 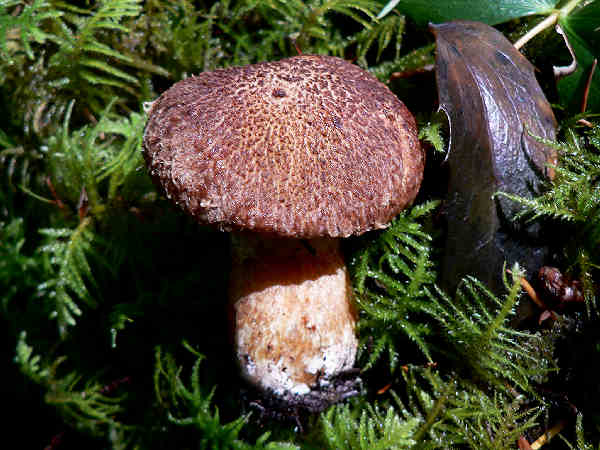 Suillus, another large group of pored mushrooms, often are called by their nickname slippery jacks. North American hosts approximately one hundred sullius species, which often grow in association with conifers. 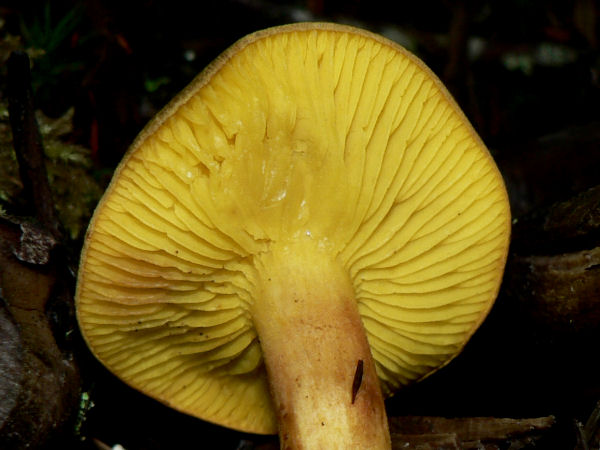 Most boletes fit the category of pored mushrooms. The Gilled Bolete (Phylloporus rhodoxanum) goes against the grain. A handful of Phylloporusgenus species grow in the United States, some bruise blue, others do not. The picture additionally highlights the bright yellow gills. 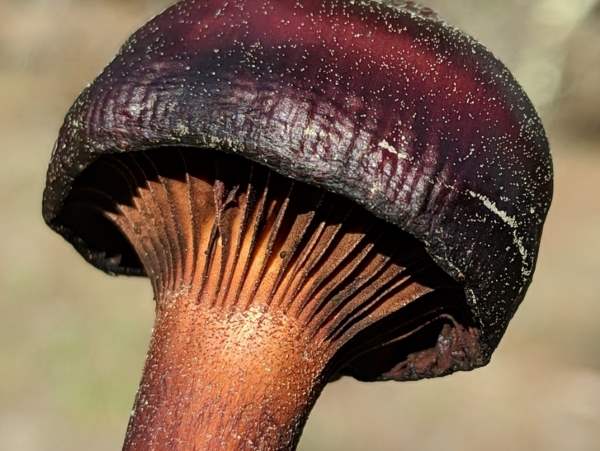 The picture highlights the gills. They can be found in coniferous forests in most areas of the United states. 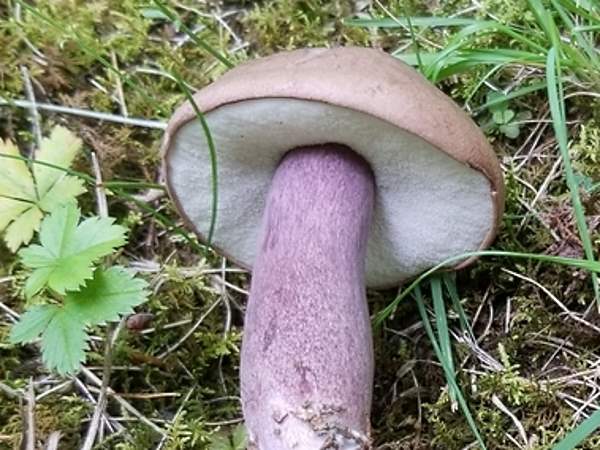 Known for their colorful caps and stipes, along with a reddish spore print, Tylopilus species grow heartily in eastern North America.

The Violet Gray Bolete in the picture is a great example. 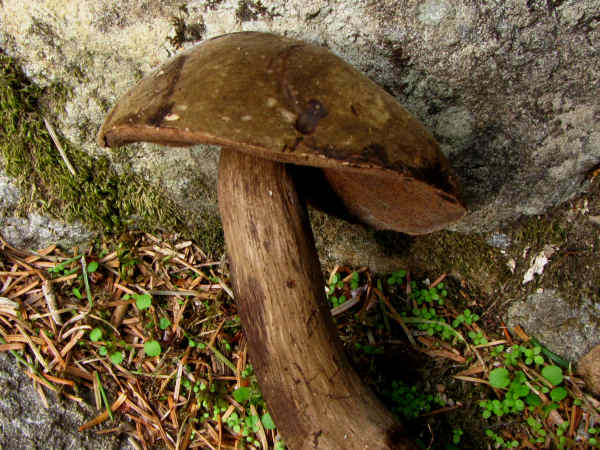 Tylopilus porphyrosporus, a less common Pacific Northwest species, stands out for its chocolate cap, stipe and pores. Many wildlife biologists became aware of its presence by documenting its existence on northern spotted owl territory. It grows in associated with a handful of pines. 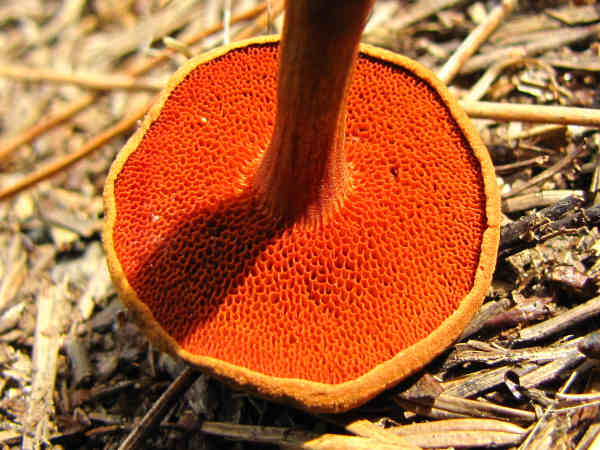 With a cap size often no larger than a dime or quarter, finding one might be a challenge. Look for a dull, often flat cap. The picture highlights the orange (to brown) Hymenophore, the better field identification clue. 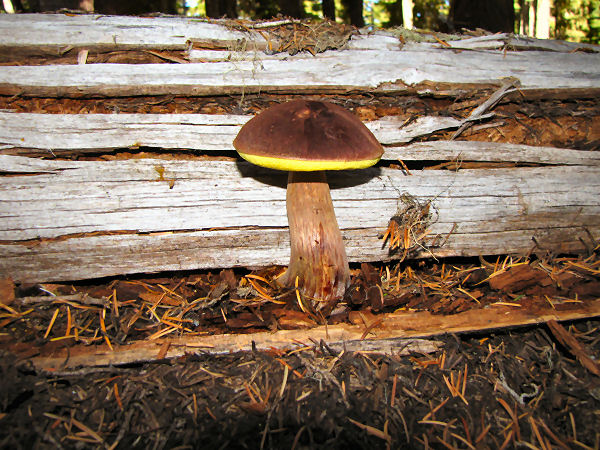 Bolete mushrooms in the genus Boletus get most of the attention due largely to their considerable culinary cache.

It’s important to note that while many bolete mushrooms such as Boletus Edulis (Porcini or King Bolete) are prized for their edibility, it would be a gastric mistake to assume the edibility of all boletes or boletus species.

When it comes to mushroom identification for the one hundred speciees of bolete mushrooms, comparing physical traits such as color and texture of the caps, pores and stems starts the process.

In some instances, other field related identification clues help. The Admirable Bolete in the picture, for example, is a striking mushroom that grows on tree stumps. 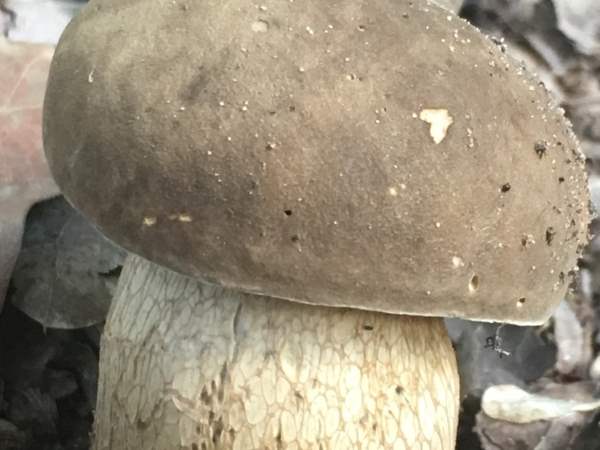 A dark cap and reticulated stem are good identification clues for Boletus variipes. They are often placed in the same group as the King Bolete. 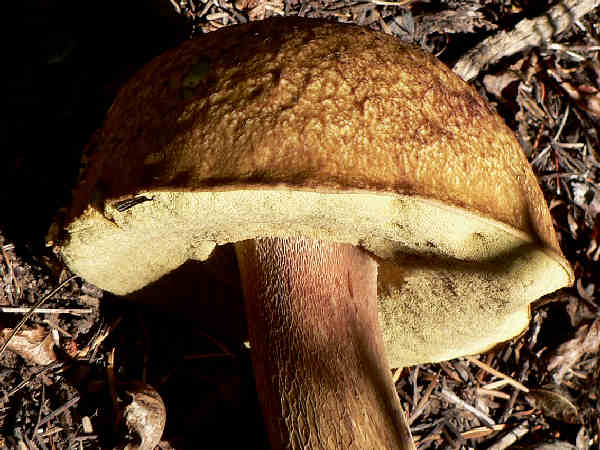 Cap and stem texture anchor help identify the Boletus fibrillosus in the picture. The presence of a reticulated stem can mean that a boletus is related to the best known bolete the King Bolete. It’s a West Coast forest species that grows in association with Douglas Fir. The wrinkled cap is also a good ID clue. 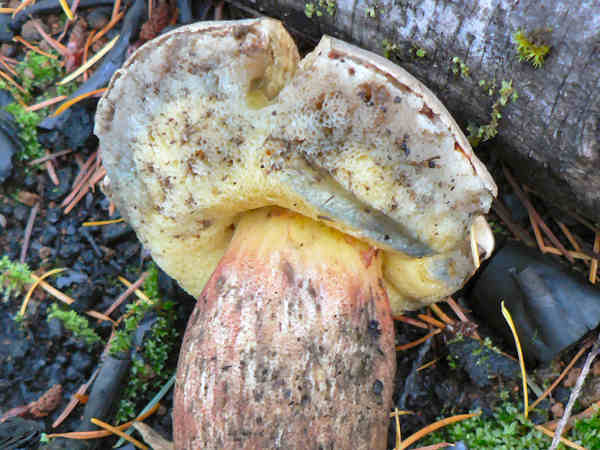 A red and yellow color stem gives the Boletus smithi a colorful look. It’s another West Coast forest species that grows in association with many trees. 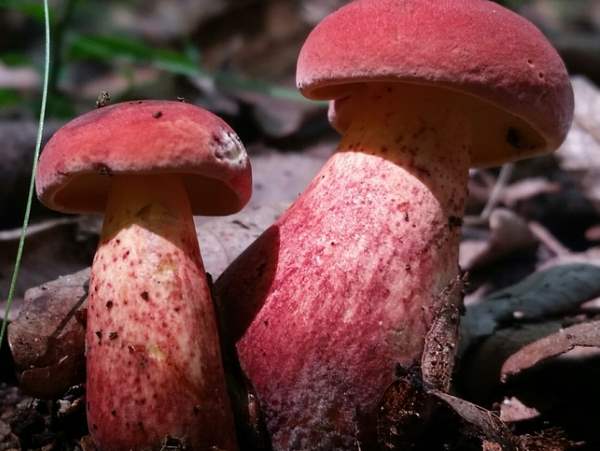 Red caps and stems with yellow pores are good first field identification clues for the Two-colored Bolete. It’s been found in many areas of the Eastern United States. 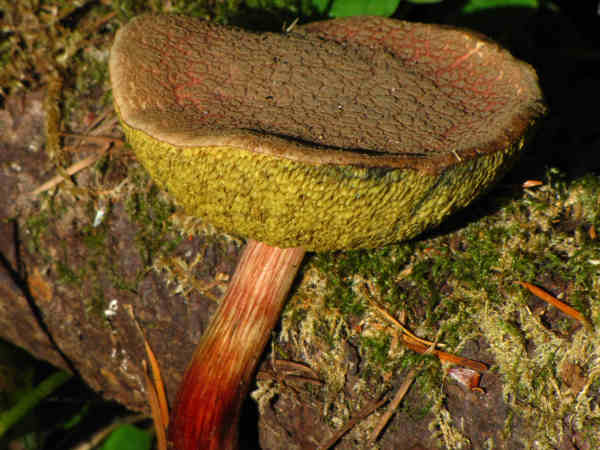 Some people nickname Boletus chrysenteron the red-cracked bolete because of the red stains that appear on the cracks of the cap as it matures. The picture shows some evidence of red staining in the cracks on the lower portion of the cap, suggesting B. chrysenteron. However, a definitive identification is not possible without a miscropic examination of the spores.

Pores are known to bruise blue fairly easy, and this specimen was found in a group of similar species with bruises. 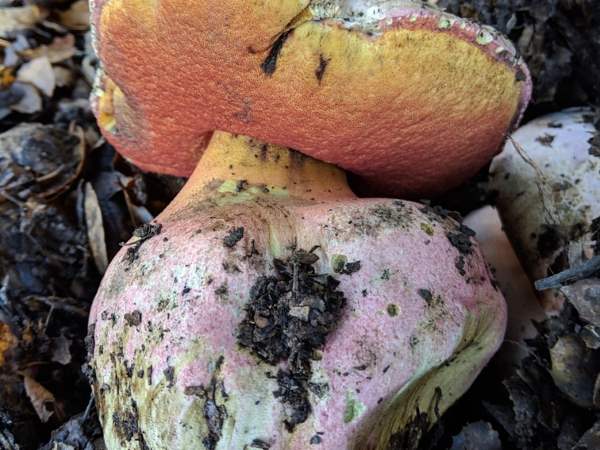 Satan’s Bolete
Red pored boletes grow in forest areas from coast to coast. On the East Coast, Boletus Frosti is the most common species, and a treat for mushroom enthusiasts to find and photography.

West Coast red-pored boletes pop up from time to time, and as recently as 2015, proper taxonomy has been the conversation of choice. According to MykoWeb

Recently it’s been discovered (well maybe not that recently, if you are familiar with both the European and California material) that what we call Boletus satanas is different from the “real” Boletus satanas of Europe. If you do a comparison of European Boletus satanas with our local taxa you will find that the European material has a different coloration of the cap and lacks the abruptly bulbous base. Molecules confirm the difference. This means that we need another name for “our” Boletus satanas and leaves us with Boletus eastwoodiae (remember the type is actually “our” B. satanas). 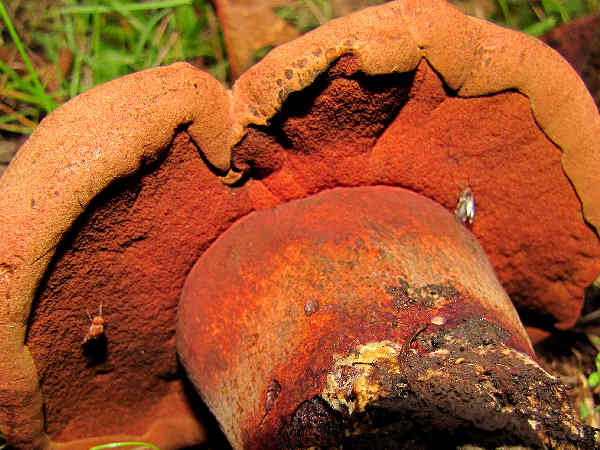 Here’s another red-pored bolete found under an oak tree. Could be a Sullius species or another of the yet less well documented species.