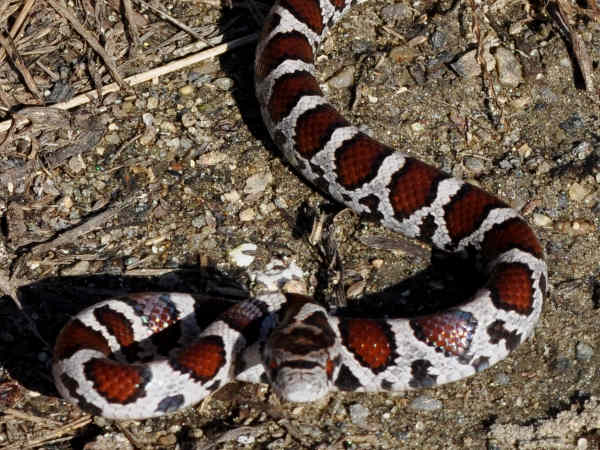 Vermont, like all New England, ranks low on the snake diversity scale. A cold climate makes for an inhospitable habitat for all but the hardiest of snakes.

The eleven Vermont snakes presented here all meet the hardiness criteria. Additionally they share the characteristic of being relatively small snakes that can bury themselves beneath the frozen soil for the winter.

All Vermont snakes however, do not share similar population levels. Four of the snakes are listed as rare, threatened or endangered.

Most reports on snakes initially or eventually get to the topic of venomous snakes. Rightfully so. Any snake that causes potential harm to humans needs to be addressed for safety reasons.

Only one venomous snake, the Timber Rattlesnake lives in Vermont. Despite the initial fears, it’s very rare and listed as a “Species of Greatest Conservation Need” in the state. Current populations are only registered in one eastern county and a handful of western counties.

Please press the snake button for more pictures and information about venomous snakes and other snakes in general.

The remainder of Vermont snakes belong to the nonthreatening Colubrid family. It starts with Eastern Milk Snakes (Lampropeltis triangulum). They are a common, adaptable and colorful snake species that finds a home in many of Vermont’s fields, forests and farms.

Finding Milk Snakes can be as easy as taking a hike. They enjoy basking in the sun. Flipping over a few big rocks or logs also uncovers them and other Vermont snakes.

Milksnakes grow up to on average about three feet in length and the red to orange to dull rust color of the bands makes them easy to spot.

The snakes best known as Black racers inhabit most areas in the East. Their range extends into the southeast part of Vermont. Their population is listed as threatened.

Physically racers are long, thin snakes with a black body, and as the picture highlights, white chins.

The Northern Watersnake (Nerodia sipedon) has the widest range of all Nerodia species. It’s hardy enough to withstand the cold Vermont winters. Identifying it is fairly easy. They are large and bulky snakes that live in and near the water. It’s the only species in the state.

Body color changes depending on age and location, so often it’s not the best field identification clue. Knowing that it’s the only species in the state is the best clue.

Rat snakes are the general name given to a group of constrictors that inhabit various regions of the East and Midwest. In many areas, including Vermont, they are also the largest snakes.

Their rodent diet and their propensity to inhabit areas with human populations often translated into the humans calling them rat snakes based primarily on the snake’s diet.

The all black body makes it a fairly easy species to recognize if someone crosses paths with it. Rat Snakes are a rare and threatened species in Vermont.

The Eastern Ribbon Snake has a distinct pattern on the body as well as the common stripes. It is designated as rare in Vermont.

Red-bellied snakes live mostly in wooded areas. They might rank behind Common Garter snakes as the most common snakes in the state.

Vermont is home to the Smooth Greensnakes. Many people also call them grass snakes. They are insectivores who consume a good deal of grasshoppers and other pesty insects that live in the grasslands of southern Vermont.