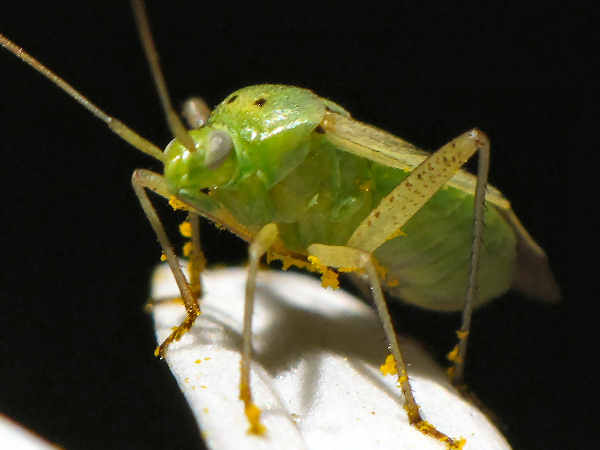 Colloquially all insects, at one time or another, get referred to as bugs. Interestingly enough, only a small percentage of the types of bugs found in the garden can be labeled as pests.

Hemiptera, formally called true bugs, consists of a wide array of familiar insects commonly labeled as garden pests including aphids and others. Uniting the group is the physical characteristic of having a proboscis used for feeding.

Consider the case of the insect in the top picture, Closterotomus norvegicus, one of a handful of species that shares the common name potato bug. Oddly enough, it’s a pest of fruit trees and weeds, along with some garden vegetables. Native to Europe, they have subsequently spread to areas of North America and Asia. The two dark spots on the pronotum (behind the eyes) are helpful field ID clues. 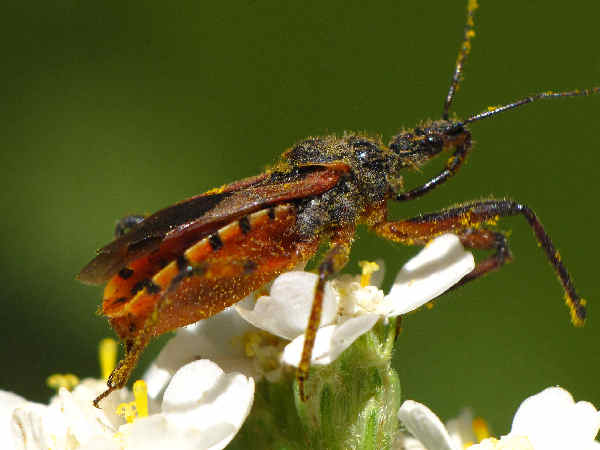 Ladybugs rank at the top of the beneficial insects category. Nonetheless, other species, such as those in the assassin bug family, Reduviidae, also receive some credit.

Members of the Triatoma genus, common in the Southwest, go by the name kissing bug because of their tendency to bite people around the face. Bites from Triatoma species are considered a public health problem because the species can transmit a parasite that causes Chagas’ disease.

Otherwise, many assassin bugs get labeled as beneficial insects becaue they feed on insect pests. 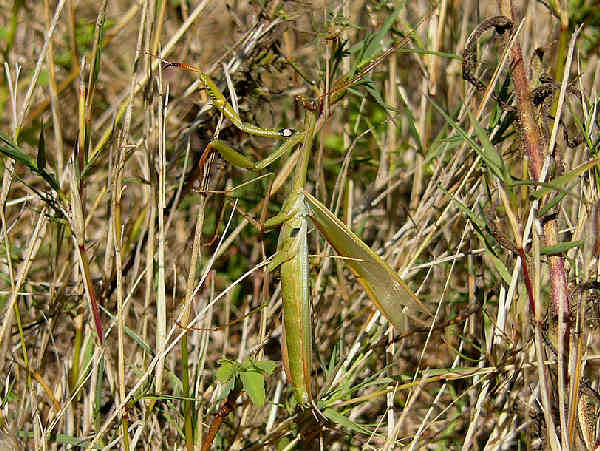 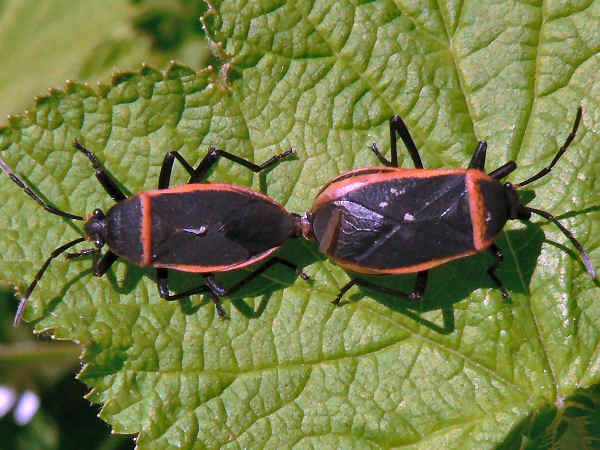 Anyone taking a cursory look at a bordered plant bug (family Largidae) could easily mistake it for a beetle. Like leaf beetles, most species live on and around leaves. However, a close inspection of the wings shows no elytra.

Unlike beetles, and similar to other members of the Hemiptera order, they have a beak-like appendage that they use to pierce leaves to suck the juices. Many, but not all, of the species have a clearly defined border around the body.

While they are pests, in small numbers they will not do lethal damage to garden vegetable plants. 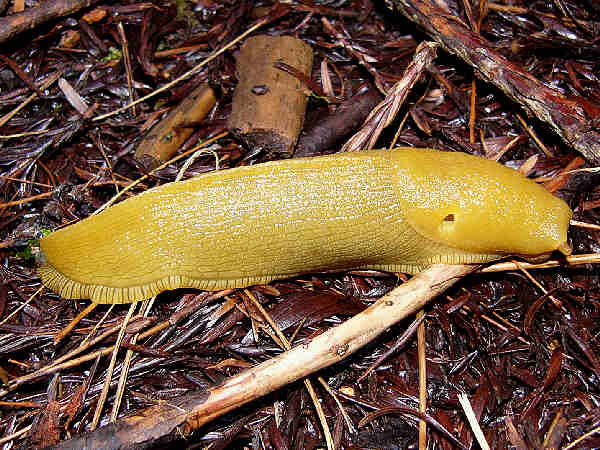 For sure, slugs are not bugs in the formal sense of being bugs in the order Hemiptera. They do not possess a proboscis for consuming plants. Nonetheless, the presence of slugs in the garden can cause severe damage to vegetable plants because they have a voracious appetite.

Like snails, slug problems in the garden are most common in the Northwest and Southeast. Managing slugs can be as easy as checking the garden during the morning and evening hours and physically removing them. Consumers can also purchase over the counter organic baits and traps in cases of large infestations.

Since slugs love dark and cool places, remove all hiding places (pieces of wood, stones, trash cans) from your garden. You can also spray these areas in the morning with white vinegar. 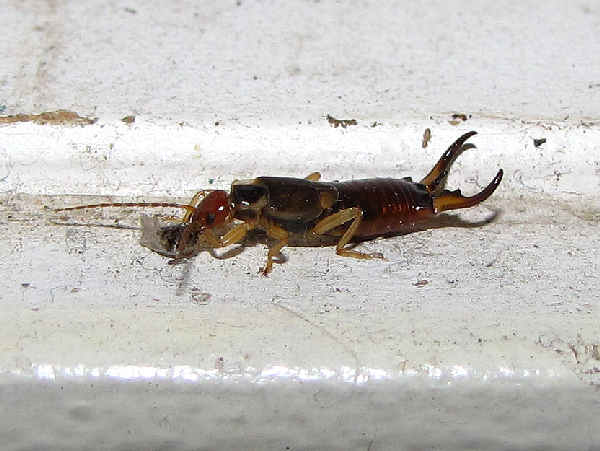 Finally, there’s always room for a bit of fantasy and storytelling when it comes to garden pests. For example, urban legend tells the story of Earwigs (order Dermaptera) crawling into the ears of sleeping humans in order to snack on their brains. It’s a science fiction best seller. At best, entomologists suggest that earwigs can pose both garden and residential infestation problems across much of the United States.

Most species average less than one inch in length and have prominent pincers on the bottom of the abdomen. They are nocturnal insects that prefer to hide in moist crevices during daylight hours. As omnivores, large garden infestations can hurt plant production. The most popular, and least invasive control method involves rolling up slightly damp newspapers and placing them on the ground overnight. Collect and dispose of the newspaper in the morning. 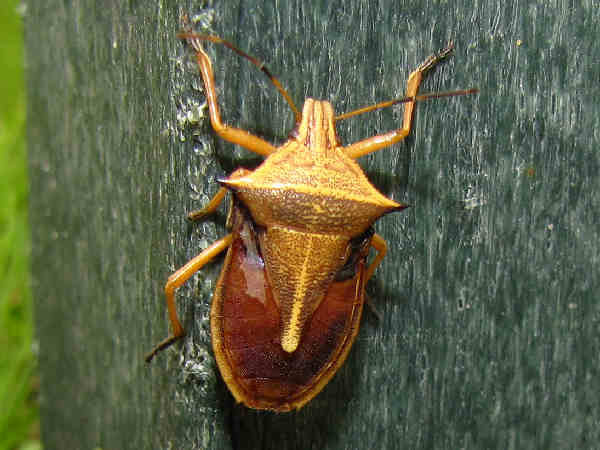 The Family Scutelleridae, better known as Shield-backed Bugs or Jewel Bugs, live almost everywhere plants grow It’s a rather small family that breaks down to about 450 species, divided into 80 genera. The U.S. population consists of approximately 14 species divided into nine genera.

Closely related are the stink bugs (Pentatomidae). The name fits. Many stink bug species not only stink, they are also labeled as agricultural pests along with the shield-backed and jewel bugs. 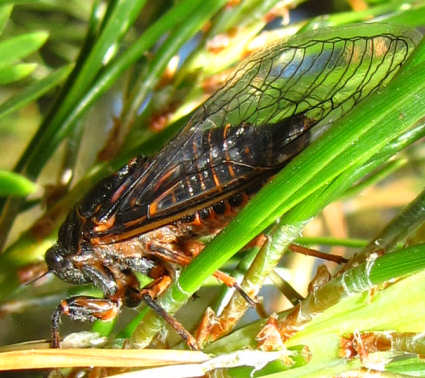 Over eighty native cidada species divided into about fourteen genera, (Cicadidae) get classified as either periodical or annual, depending on their life cycles.

Almost every year there is a Magicicada emergence event, however, most of the emergences are limited to a small geographical area. Their above ground emergence is cause for both wonder and annoyance. In large numbers they are capable of causing damage to local trees.

Male cicadas are quite the vocalists. They use their tymbals, small membranes on the top of their back, to sing and attract females. In chorus, they can be loud.

Apart from the noise and damage to local flora, cicadas are not a threat to humans. They do not carry diseases and their neither sting nor bite. On the bright side, a Magicicada eruption means plenty of food for local squirrels, birds, raccoons and other wildlife.