With the exception of two types of venomous snakes, Pennsylvania snakes consist of nineteen species of colubrid snakes, a family of snakes with familiar names such as ratsnakes, kingsnakes, garter snakes and watersnakes.

Pennsylvania’s colubrid snakes all share the virtue of being relatively benign reptiles that perform more good services such as rodent and insect control than they often get credit for. With most people, the yuck factor associated with snakes takes hold.

Venomous snakes receive the most headlines in Pennsylvania snakes discussions for the same reason they do in other states. Adding an element of medical importance to a snake discussion grabs attention. Pennsylvania hosts two of the three venomous snakes in the Pit Viper category, copperheads and rattlesnakes.

Timber Rattlesnakes are the most common of the Crotalus rattlesnake species in the United States and they are the dominant of the two Pennsylvania rattlesnakes. Considering that Pennsylvania literally means Penn’s Woods, and wooded or forested areas are the snake’s habitat, it’s reasonable to suggest they inhabit most of the state’s forest areas.

The other rattlesnake, the Eastern Massasauga (Sistrurus catenatus) has a small population in the western end of the state..

The snakes best known as Black racers inhabit most areas in the East from southern Maine to the Florida Keys. They are long, thin snakes with a black body, and as the picture highlights, white chins.

Pennsylvania is home to the Eastern Hognose snakes (Heterodon platirhinos), one of five native Hognose snakes. They are best known as the snakes that play dead when confronted by trouble. 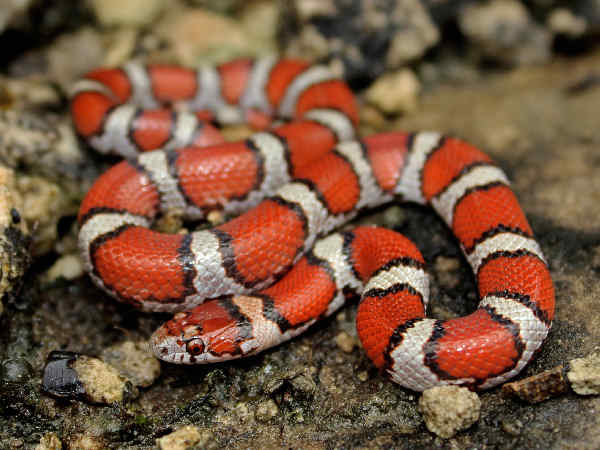 As the picture demonstrates, Eastern Milk Snakes (Lampropeltis triangulum) are very adaptable and colorful snakes. It’s one reason they are popular in the pet trade. 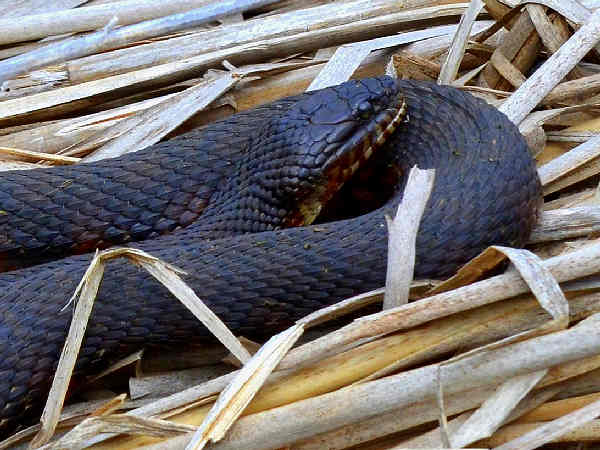 While many snakes display a propensity to swim in water, think garter snake, Water Snakes refers to a specific genus of snakes (Nerodia).

With the exception of the Pacific Northwest, nine different species inhabit most areas of North America. The Northern Watersnake (Nerodia sipedon) is Pennsylvania’s only species. It’s body color changes depending on age and location. The picture shows an adult with dark skin that hides any distinct body pattern.

Their above average size and bulk makes them fairly easy to identify in water areas that host other snakes.

In many states, including Pennsylvania they win the award for being the state’s largest snakes. Adults can grow over seven feet in length. Seeing them climbing a tree can cause quite a fright. The all black body makes it a fairly easy species to recognize.

Here’s a quick list of additional Pennsylvania Colubrid Snakes. Most are small, inconspicuous snakes. The snakes button at the top of the page provides additional pictures and information covering these species.