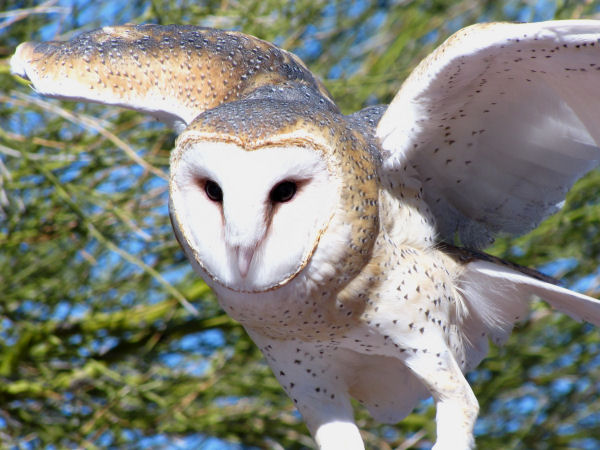 Types of owls discussions are much easier to explain than their other raptor counterparts.

Owl species divide into two families, the Barn Owls (Tytonidae) and the True Owls (Strigidae). Based on physical differences, the barn owls, like the one in the top picture, are characterized by long legs, a heart shaped face and small eyes.

Owls remain popular birds. Mostly known as the night hunters of the raptor world, they can be found in all in all areas of the world with the exception of Antarctica. Depending on the source, between 19-21 owl species, divided into eleven genera, are common residents of the United States. The Barn Owl is the sole Tytonidae representative.

The owl pictures and text provided here are intended to help with basic owl identification skills.

Along with Great Horned Owls, Screech Owls and Short-eared owls, they rank as the most common owl species in the United States. Because they reside year round in many areas, old buildings, such as barns, have provided the protection necessary for breeding and survival.

Most people rightly associate the true owls with trees. With few exceptions, the Snowy Owl and the Burrowing Owl (in the video clip), most nest in trees along with using them as a platform for spotting and swooping in on their prey.

Burrowing Owls inhabit Southwest open areas and Florida year round. Some migrate to the grasslands and open areas of the West during breeding season. The common name burrowing reflects the fact that they have underground nests, often borrowed from Prairie Dogs and other burrowing animals.

True to form, the video clip shows it to be one of the earless owls of open country. It also has longer than average, skinny legs.

While their traditional habitat continues to decrease due to human development, some of the birds have become adaptive. For example, in the desert Southwest, it’s possible to see them in a parking lot at dusk and dawn, their usual hunting times. 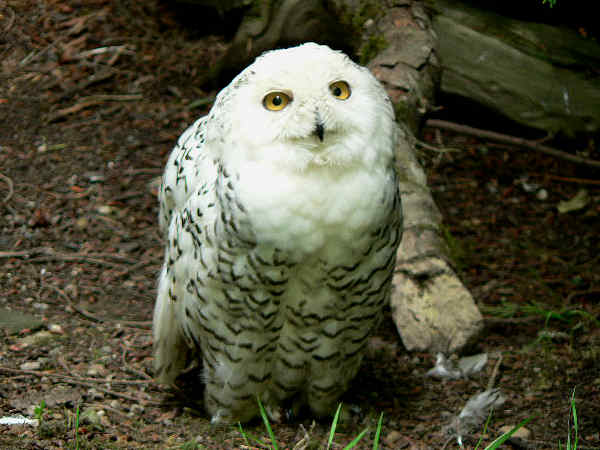 The Snowy Owl takes us from one geographical extreme to another. The white feathers give away the fact that the snowy, circumpolar north serves as its primary habitat. Lack of consistent predators in the region makes their ground nesting habits fairly safe.

Typically they migrate to Canada during the winter. In times of population eruptions they make their way south to different areas of the United States, where they attract attention from birding enthusiasts and the local media.

Because of their wide range, and/or infamy, most people share a passing knowledge of a least five owl species, Spotted and Barred Owls, Screech Owls, Great Horned Owls and Short-eared Owls. The following set of owl pictures highlights these species and their relatives. 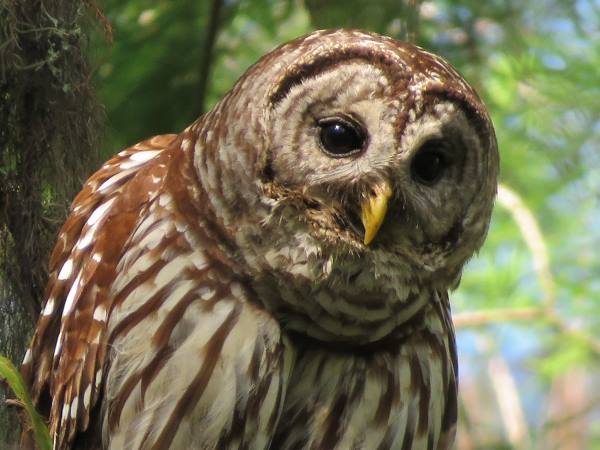 Spotted owls caused quite the hub bub in 1990 when they became the first and only native owl species listed as threatened under the terms of the Endangered Species Act (ESA).

Across states, there might be a few owl species listed as threatened, otherwise, most owls don’t cause such a ruckus with the business crowd.

They are related to the more common Barred Owls, pictured. In fact, the aggressive nature of Barred Owls provides an additional challenge for Spotted Owls to find proper nesting areas in their Northwest territory.

Otherwise, Barred Owls reside in most forest areas of the East. 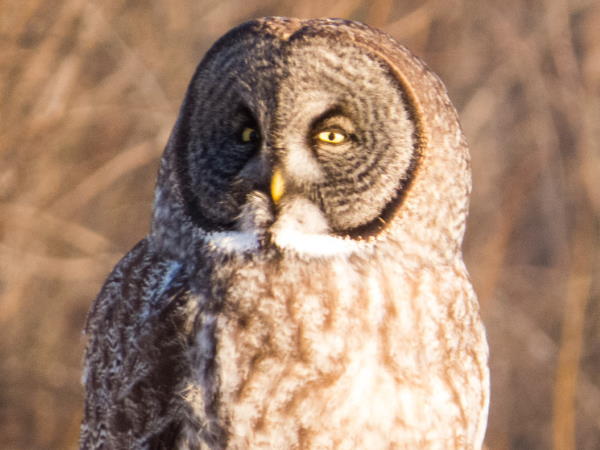 Great Gray Owls rank as the largest owls in the United States. They are related to the Spotted and Barred Owls and they inhabit boreal forests in the northern United States year round.

Like other species, when populations spike, some head a bit further south in search of food. 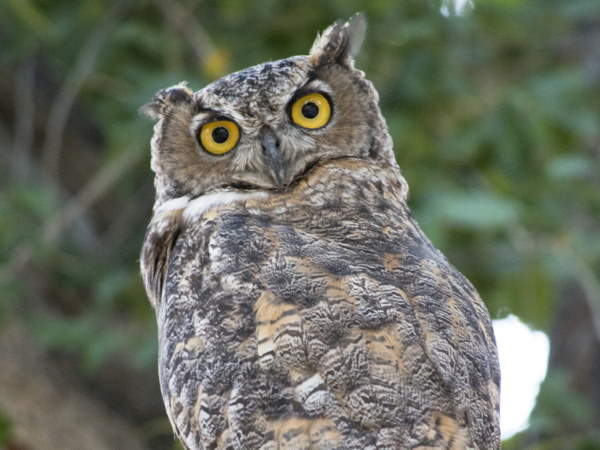 The popularity and familiarity of Great Horned Owls comes from their presence near residential areas throughout all of North America. Unlike other owl species, they are often active during daylight hours, especially early morning and later evening.

Yellow eyes and the feathery tufts on the head, along with their size gives them a unique look, and makes them easily identifiable. Great Horned Owls can stand up to two feet in length and have a wing span of five feet. Their widespread presence in North America means that their appearance changes slightly from region to region.

During the night hours, their call, the basic hoo-hoo-hoo-hoo-hoo, indicates their presence. Here’s an audio of the call.


Like other owls, they hunt for local rodents and birds, occasionally capturing a small pet left alone. 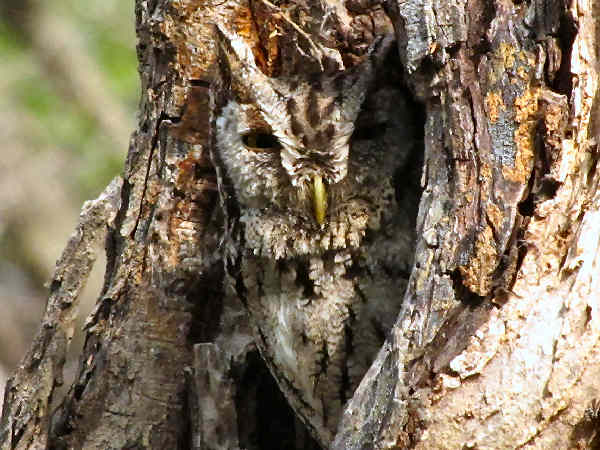 Another stand out group of owls, screech owls, did not get the ‘owls hoot’ memo. Their vocalization pattern literally does sound more like a complaint. Three species reside in the United States:

The Eastern and Western species live year round in forest areas. Like the Great Horned Owl, they rank among the most common owl species from coast to coast, including parts of Alaska.

Whiskered Screech-owls are a Southwest specialty bird with a range limited to South Arizona.

Small in stature, screech owls grow about eight to nine inches in height. Sometimes active during the day, fortunate birders might find them at eye level resting in tree cavities. The picture of the screech owl explains the reason the group gets called tree owls. They nest in trees. 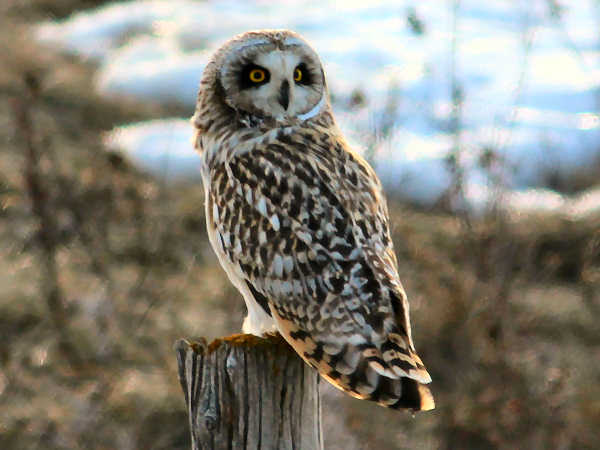 Short-eared owls range across most of the United States, including a Hawaiian subspecies. However, because they they inhabit grasslands and open lands, they are less well known than the other wide ranging owl species. 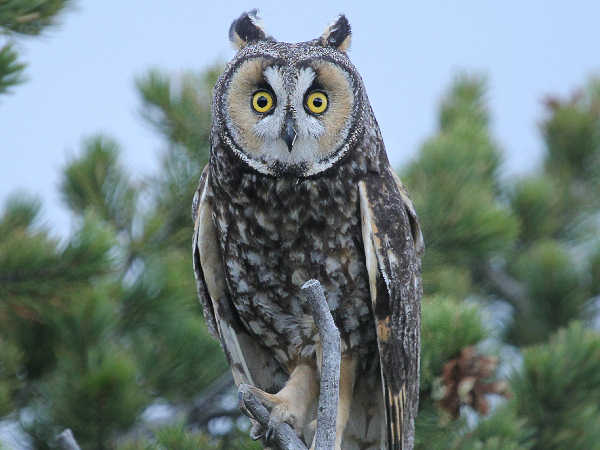 A relative, the Long-eared Owl resided year round in many areas of the West. During winter, some of the population scatters to areas south and east. 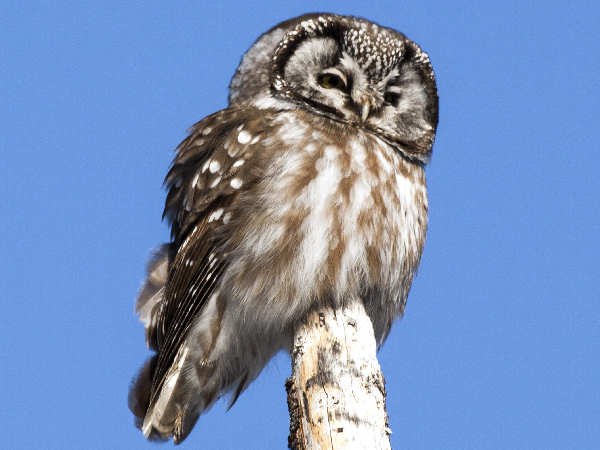 Here’s a quick review of the owls with a more limited range, starting with another norther species, the Boreal Owl.

They fit in the smaller owl category, not growing above a foot in height. They call the Boreal Forests of the North and Rocky Mountain regions home. 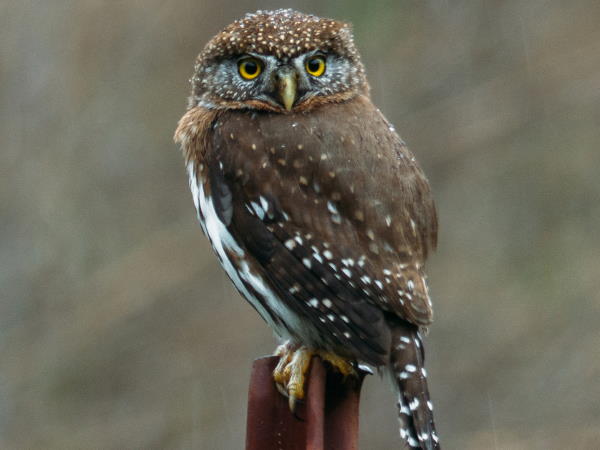 Despite the name, Pygmy Owls are not the smallest owls in the United States. That distinction goes to the Elf Owl. Still, at six inches tall, they can be considered small owls.

While three species have been documented in the United States, two of them, the Ferruginous Pygmy-Owl and the Mountain Pygmy-Owl, barely cross the border in Arizona and South Texas. The Northern Pygmy Owl is a Western species that is often active during the day, making it one of the easier owl species to spot.

Elf Owl habitat has been restricted over time to areas of Southern Arizona and Texas. Like another six inch western species with a limited range, the small Flammulated Owl, they primarily consume insects. 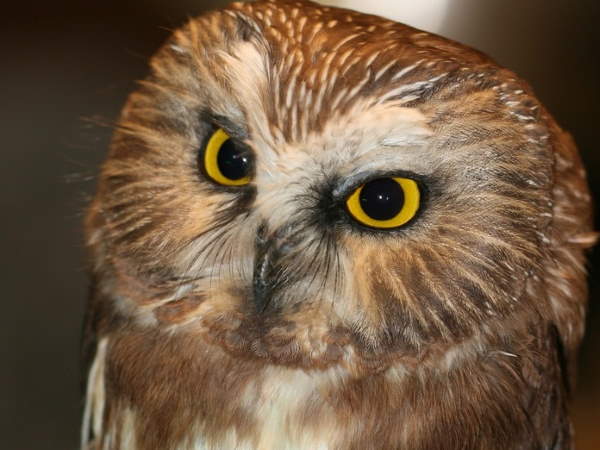 Depending on the population levels, Northern Saw-whet Owls can be found in forests from Alaska in the North to Florida in the South. They live year round in many northern forests. Some migrate south for the winter. Like Snowy Owls, in years when their population is extremely strong they migrate to the southern most forests of the United States.

The picture shows an earless owl with bright yellow eyes. 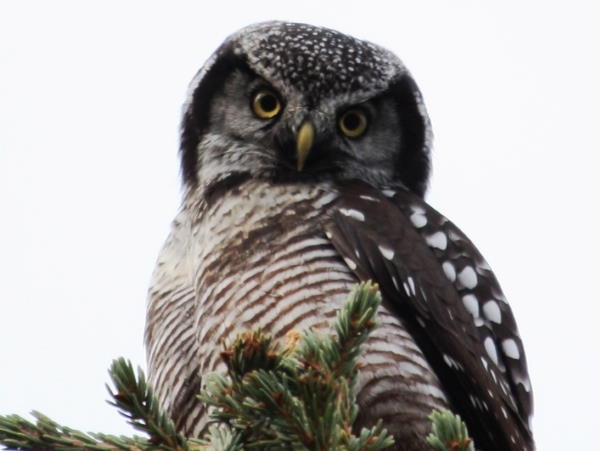 The last of the owl pictures goes to the Northern Hawk Owl.

It’s primarily a resident of Canada’s Boreal forests. Like Snowy Owls, when their population increases, some migrate to northern areas of the United States during the winter.

The common name Hawk owl reflects it habit of acting like a hawk by perching on trees during the day scoping out food.