The cooler climate of the Pacific Northwest makes is one of the less snake diverse regions of the United States. Oregon snakes are no exception to that general rule. The state’s fifteen snake species also display a regional theme.

The Willamette Valley, home to most of the state’s population, and an agriculture center, shows very little snake diversity. The coastal range on the western border of the valley supports a few additional snake species. The cascades and lands east of them also support a few additional species.

Growing up to eight feet long, the snakes with common names such as racers and whipsnaks can be found in all the continental 48 states. Physically they all tend to be long and comparatively thin.

Black Racer (Coluber constrictor) is the general name for one of the most widespread of all the snakes native to the United States. In fact eleven different subspecies inhabit almost every state in the lower 48 states.

Color is a common name applied to many of the subspecies.. The Western Yellow-bellied Racer is the Oregon subspecies. With the exception of the higher elevations of the Cascades, they inhabit multiple habitat across Oregon.

Striped Whipsnakes (Masticophis taeniatus) have a range throughout most Oregon east of the Cascades. There are some questions about whether or not it an be found in the north east corner of the state.

The next pictue shows a black and white species of the California King Snakethat shares some physical characteristics of the Eastern King Snakes. It lives in most areas of California with the exception of the northwest Redwoods area.

Gopher Snakes or Bullsnakes (Pituophis melanoleucus) are one of the most common of Oregon snakes, found both east and west of the Cascades.

They can grow large and bulky, often resembling rattlesnakes with their brown blotched body. Because of their habit of basking in the sun, it’s sometimes easy to approach them for a definitive identification. It almost goes without saying, look for the rattle. If no rattle, think Bullsnake. 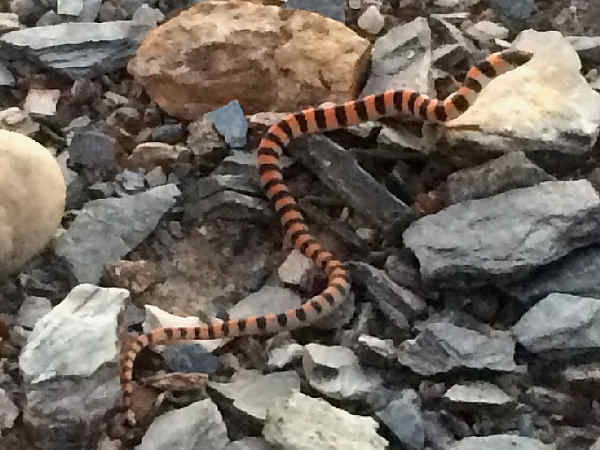 Groundsnakes (Sonora semiannulata) rank among the most colorful of Oregon snakes. There is a very small population along the eastern border of the state. 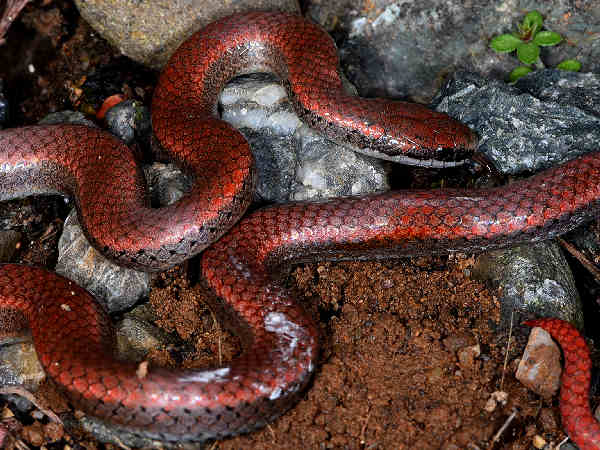 The Western Rattlesnake (Crotalus oreganus) wins the title of being the most common rattlesnake species in the Rocky Mountain and Pacific Coast states.