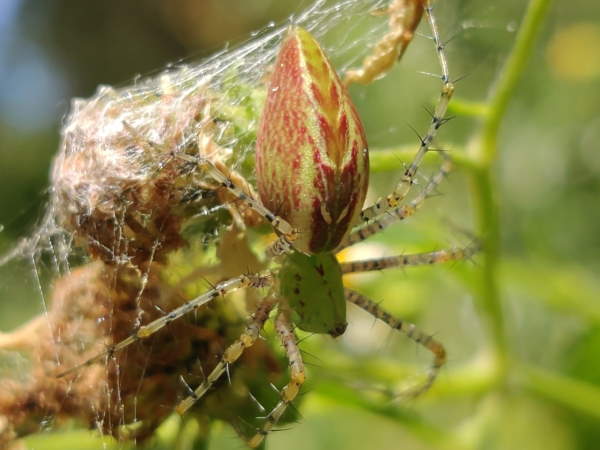 Furthermore, with respect to spider enthusiasts, it’s safe to suggest that it should be fairly easy to find and identify about one hundred of the total number of Nevada spiders. After all, the state’s Southwest location and warm climate in the southern areas around Las Vegas makes for Nevada spiders being a year round phenomena, in the home, yard and other outdoor locations.

While no way considered extensive, The Las Vegas Wash Invertebrate Inventory for 2000-2011 produced about a dozen groups of spiders that can easily be seen and identified in the area:

Some of these species are also common in homes and gardens around the Las Vegas residential areas and other areas across the state.

Many additional lawn and garden spiders exist. For example, the picture at the top of the page shows the Green Lynx spider, a large and common back yard spider in the southern areas of the state, including the Lake Meade area and Las Vegas.

In fact, three additional smaller and less colorful lynx spiders inhabit back yards across the state. The striped lynx and Western Lynx are the most common. Oxyopes tridens, a Southwest species, is mostly a desert dweller. Size and color make the Green Lynx stand out. 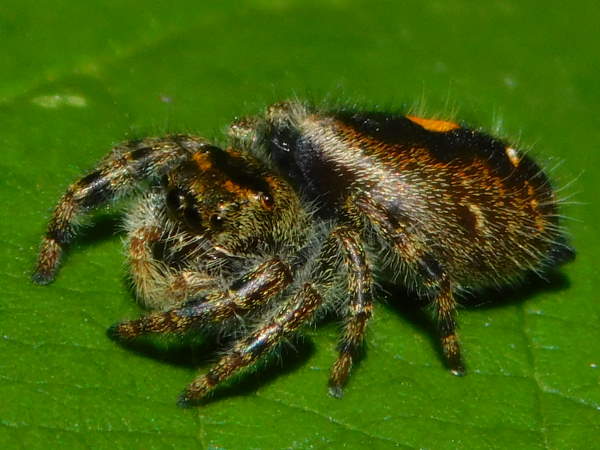 These types of spiders often get grouped as hunting spiders because they do not use webs to capture prey. Jumping spiders also fit that category and constitute the most diverse family of spiders present in yards across the state.

As the picture highlights, they can be easily recognized as the playful looking spiders with four binocular eyes in the from of the face. While there are probably two dozen or more jumping spider species in the state, species from two genera, Phidippus and Habronattus are the largest and most common.

Jumping spiders and other hunting spiders with common names such as wolf spiders, ground spiders and crab spiders often wander indoors. In that sense, they can sometimes be grouped within the common house spiders category. 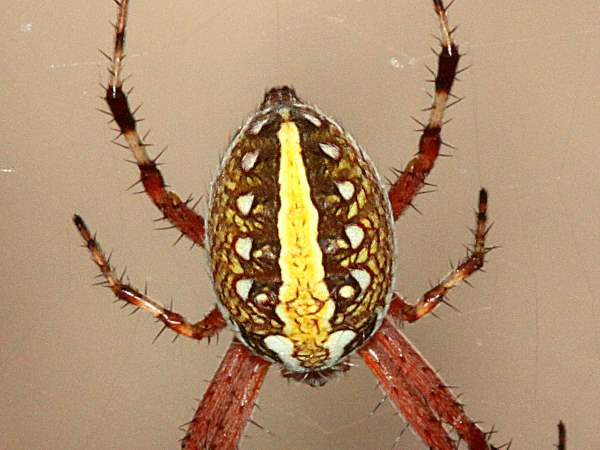 When it comes to the web spiders, three of the most common types of orbweaving spiders, the Spotted Orbweavers, Writing spiders and Araneus spiders rank among the most conspicusous groups of yard and garden spiders.

The picture shows a yellow version of the Western-spotted Orbweaver. They also come in a form with a darker to black body color. 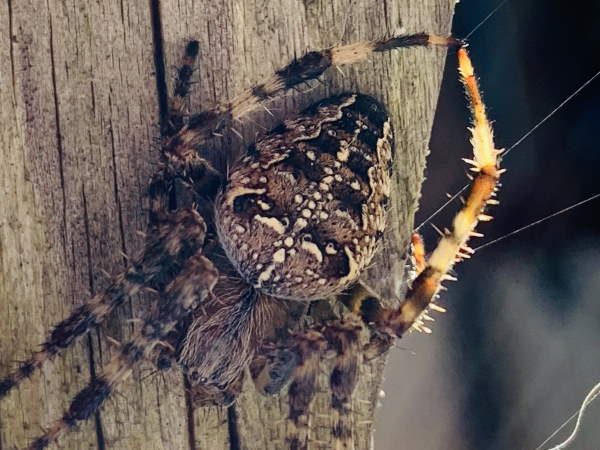 Cross Orbweavers can grow fairly large. The white stripe pattern on the brown abdomen resembles a cross, explaining the common name. They are European imports with another common name of European garden spider. 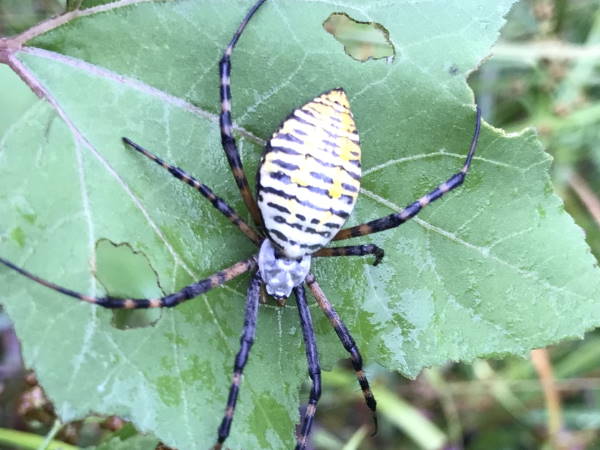 The thin, colorful bands on the abdomen of this spider explains the common name Banded Garden spider. It is one of the two common writing spiders that build webs with what looks like a series of “Zs” written down the middle of the web.

Black and Yellow garden spiders are the other common writing spiders in the state. Both are harmless to humans. 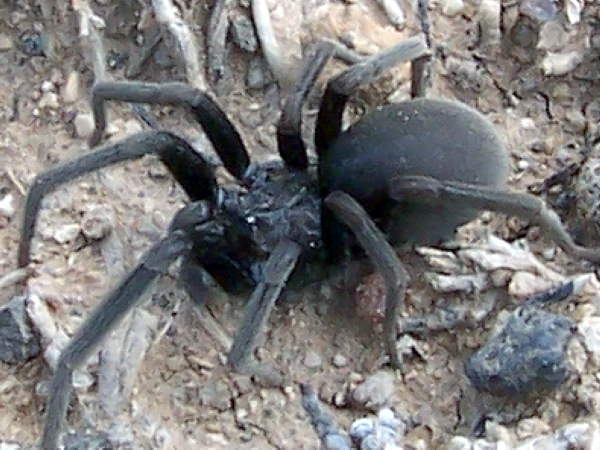 Spider webs come in many forms other than the intricate orb webs of the aforementioned spiders. Residents often cross paths with a large, dark bodied spider that builds a messy web on many homes in the Las Vegas area. They go by the name Southern House spider and belong to the crevice weaver family.

If and when they are spotted on the ground, they are often mistaken for tarantulas, another desert spider specialty of the area. Fortunately they are harmless. 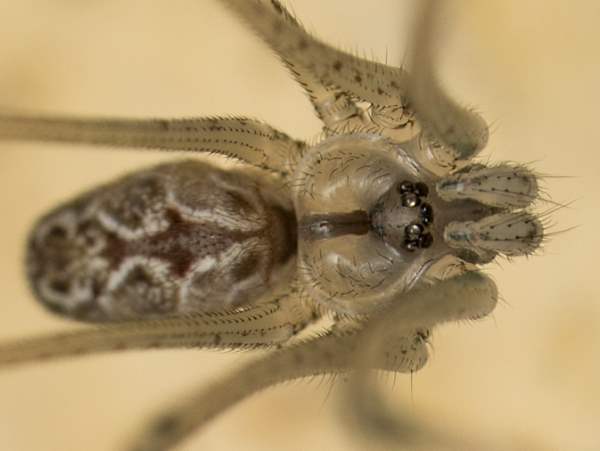 Traditionally the web spiders such as cobweb spiders and cellar spiders get linked to the common house spider category. The picture shows a close up view of the Marbled Cellar spider, a common Nevada house spider.

Note the two body parts identifying it as a spider. Their long legs provide for the daddy long legs nick name, one they share with their relatives, the one body part harvestmen. 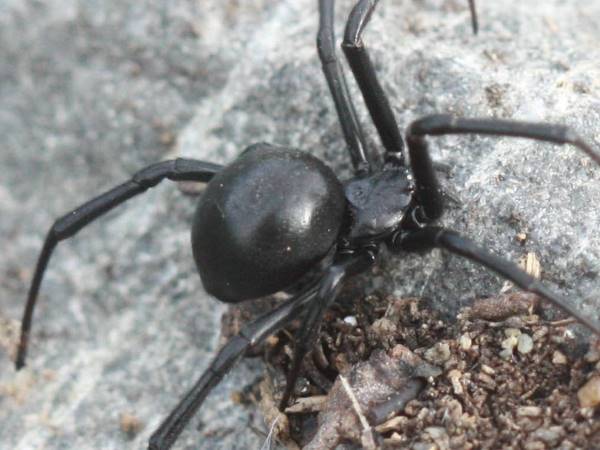 Most people are familiar with Nevada’s Black Widow spiders. Females of the species are spiders of medical importance and can be identified by the all black shiny body with the red hour glass marking on the bottom of the abdomen.

None of the other cobweb spiders are categorized as harmful, except for messing up the corners of a room with their webs.

When it comes to brown spiders, the Desert Recluse (Loxosceles deserta) gets the population’s attention. The violin pattern on the top of the head is not always present in this species. The fearless person might want to check out the eye pattern as the best identification clue. They have six eyes. Two eyes sit together in a set of three across the head.