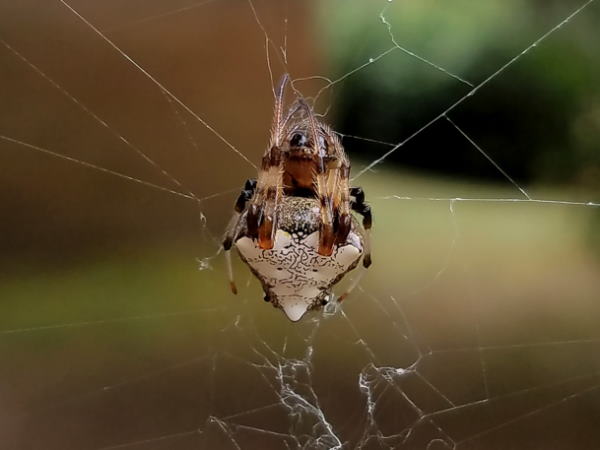 Some internet research shows over a sixty year interest in both the professional and practical documentation of Mississippi spiders. An early study covering different ecosystems in all of the state’s 82 counties documented two hundred and eighty species. The top five families with the largest number of species were:

Other professional research includes attempts to better understand the role of spiders as natural pest control in agriculture. For example, Spiders Of An Old Field Habitat In The Delta of Mississippi. Young and Lockley. Journal of Arachnology 22 :114–13.

By 2006, a researcher from neighboring Auburn University suggested “It is estimated that, with more thorough investigation, the Alabama fauna may be found to include at least 700 species.” As a ballpark estimate, it’s also reasonable to suggest a similar number of total Mississippi spiders.

A more practical approach to Mississippi spiders starts by examining the types of spiders people around the state see and document throughout the year. Currently, for example, the citizen science project called Inaturalist lists around fifteen hundred participants documenting over two hundred spider species.

This introduction to Mississippi spiders adopts the practical approach and provides pictures and identification tips for the five families listed earlier. They happen to be the most common types of spiders seen in residential areas and parks. Three different heights, eye level, shrub level and ground level organize the presentation. Please press the green spiders button for more comprehensive information on these and other spider families.

With some exceptions such as eyeing spiders on structures during a walk, most eye level contact with spiders happens with the orbweavers. As long as there are adequate anchors for their webs, the three dozen or so documented orbweavers in the state often can be seen by people walking the neighborhood or hiking a trail. They range in color, size and shape, with the largest and more colorful often catching the eye. The picture at the top of the page shows an Arrowhead orbweaver with a triangular abdomen. 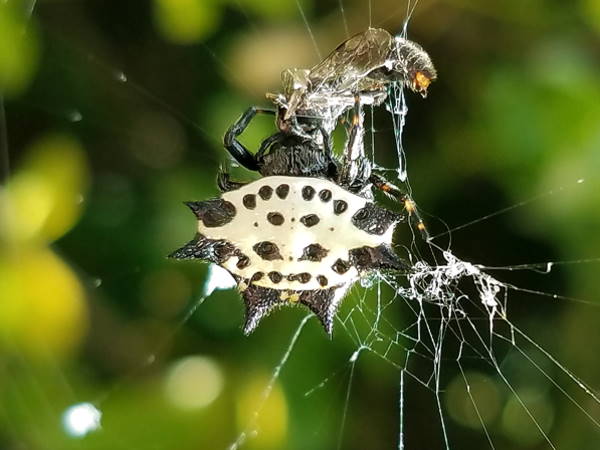 The Spinybacked Orbweaver shows a traditional round abdomen surrounded by pointed extensions. 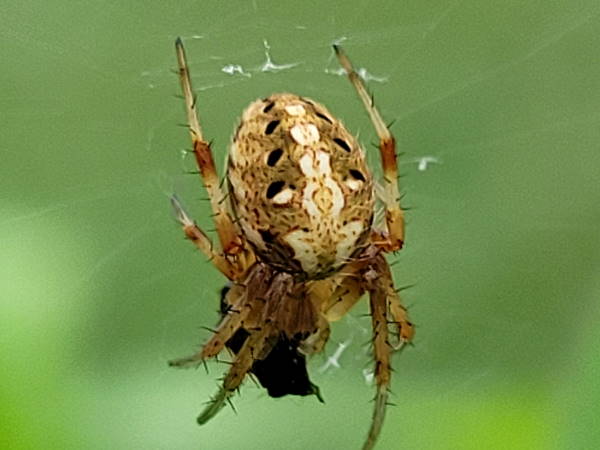 Finally, the Arabesque Orbweaver represents the more traditional looking orbweaver with a rounded abdomen. They are one of three orbweaving genera common seen in residential areas. Members of the Araneus genus account for the largest number of orbweaving species. Members of the writing spiders family (Argiope) produce some of the largest orbweavers such as the Yellow Garden Spider.

Speaking of large orbweavers, recent news from Georgia suggests that the large Joro spider will soon be joining the large Banana spider as a permanent resident of the state. 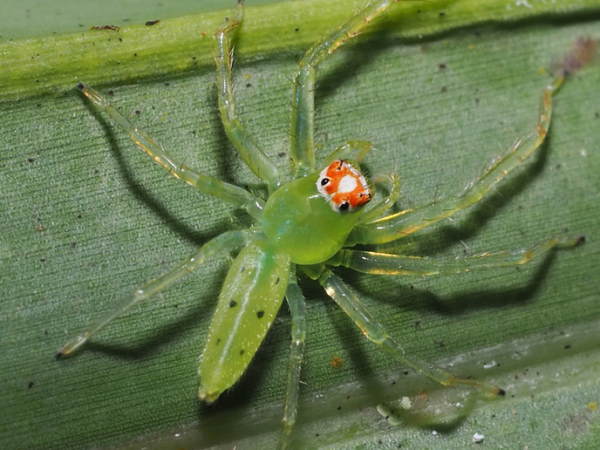 Jumping spiders, along with crab spiders and a handful of other spider families often use the state’s bushes and shrubs as their homesteads and favorite hunting grounds. Following a common Southeast pattern, jumping spider diversity is strong in Mississippi. Like the orbweavers, they come in a variety of colors sizes and shapes.

The Magnolia Green Jumping spider, pictured, lives in most areas of Mississippi. Larger jumping spiders such as members of the Phidippus genus, are generally easy to spot, especially the ones with red coloration on the body. Smaller species that fit into genera such as the ant mimics might grow to one-eighth an inch or less, making the less easy to spot. Using a good macro lens on a camera often helps with identification of the smaller species. 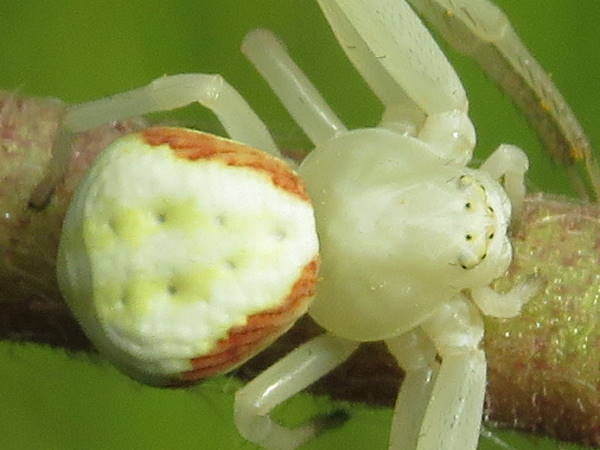 and physical characteristics apart from body color serve as the best field identification clues. The picture shows a Goldenrod Crab Spider, often commonly referred to as a flower crab spider. White-banded Crab Spiders get their nickname based on the presence of a white (or sometimes) yellow band that runs around the face under the eyes. 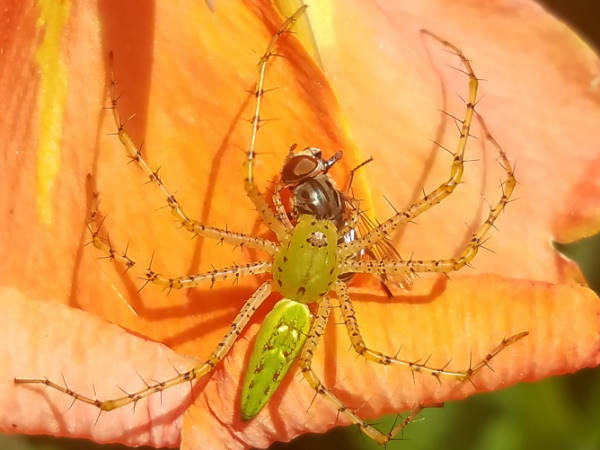 Certainly other spiders inhabit the local shrubbery, although with less species density. The Green Lynx spider, a staple in Southeast shrubbery serves as a good example. It’s one of only a few species of native lynx spiders. 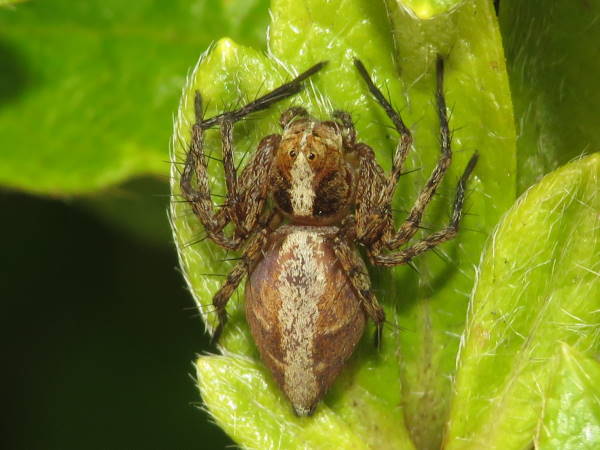 A closer look at the shrub level might also bring up the Western Lynx, a smaller and duller color species that often shares space with the jumping spiders. The thin pointed abdomen easily differentiates it from jumping spider species. 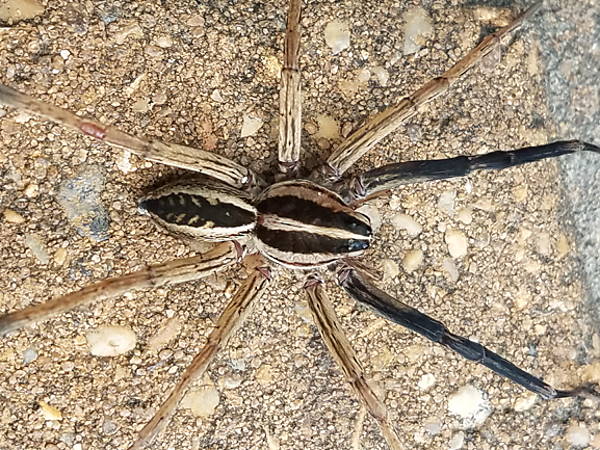 Finally, ground level viewing brings up a variety of spider families and species, with Wolf spiders arguably showing the most diversity. Unfortunately, without microscopic examination, wolf spider identification is very problematic. For example, species in one genera can differ from other species based on the number of hairs on the leg parts. Since most spider enthusiasts use pictures as the focus of their identification efforts, their wolf spider identification can come up a bit short.

The Rabid wolf spider in the picture is an exception to the rule. It’s basic body color and pattern are commonly used as the initial field identification clue. 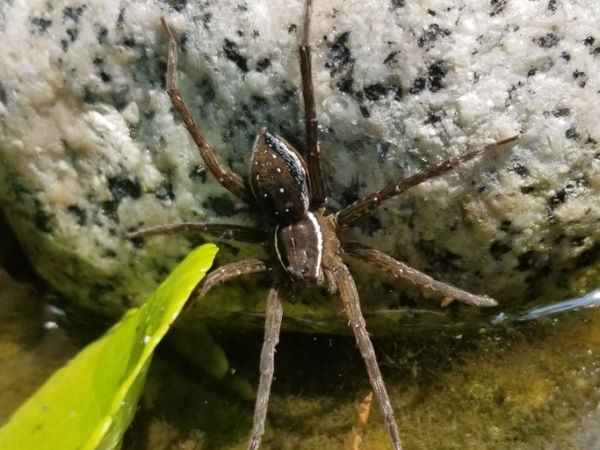 Less experienced spider enthusiasts can also have issues differentiating between the larger wolf spider members with other medium to larger spiders such as the five different fishing spiders (Dolomedes) that travel Mississippi grounds. Both have brownish bodies with usually long, thin legs. A close look at the body pattern can sometimes help with identification. For example, the abdominal spots on the Six-spotted fishing spider in the picture serve as a good field identification clue. 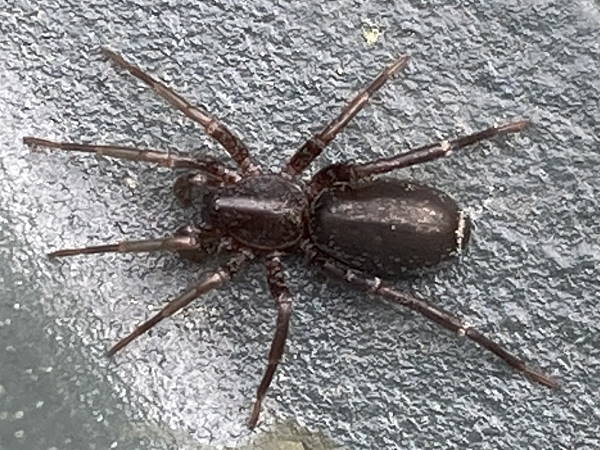 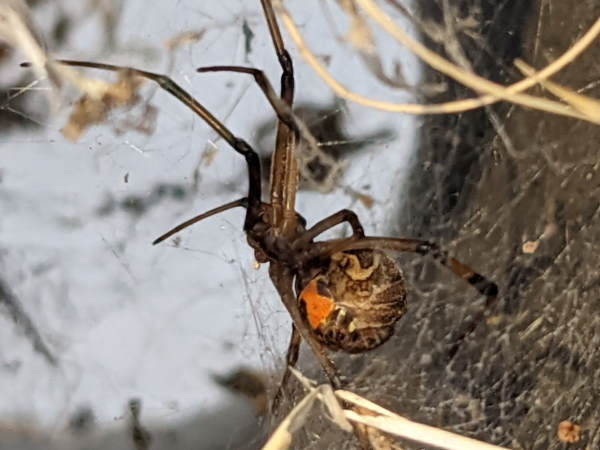 Only bites from females cause potential medical issues. Females prefer to sit still in the web, making the potential for biting a human dependent on the human walking into the web. Checking areas, including back yards with wood piles and other areas that provide adequate shelter and food for the spiders greatly increases the probability of avoiding contact and bites from the spider. 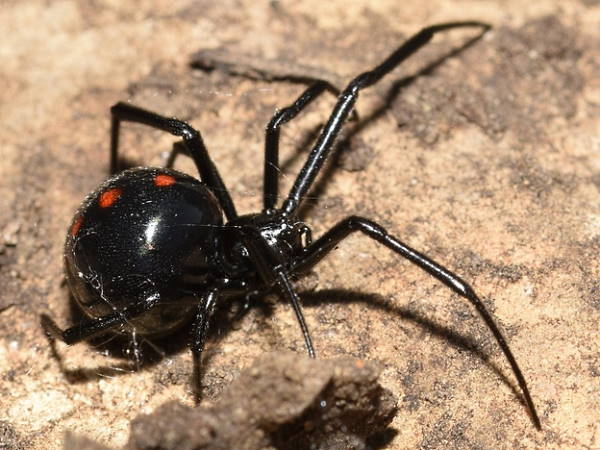 Both Southern and Northern black widows live in the state. 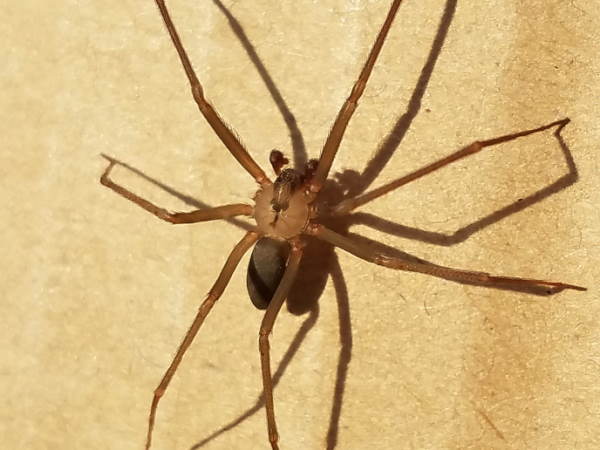 Brown recluse spiders belong to a separate family from the widow spiders. Their status as a spider of medical concern is well known. The darker violin mark on the cephalothorax serves as the first identification clue. It’s important to note that the common name recluse literally applies to the spider. They prefer to avoid human contact. Many experts suggest checking clothes prior to putting them on in areas where the spider is known to inhabit.