Snake diversity in the United States runs from south to north, with most southern states having the highest number of snake species. Maryland’s geographic situation on the Mason/Dixon line puts in in the middle of East Coast geography. It’s twenty seven snake species also puts it at the higher middle range of snake diversity among all US states.

This page presents a truncated version of Maryland states. Please press the green snake button for more pictures and information on a variety of snake species.

The picture at the top of the page shows a Black Racer (Coluber constrictor), a common species in Maryland. They are long, thin snakes with a black body, and as the picture highlights, white chins.

The term racer describes a behavior pattern often witnesses by people. When they are approached, the often race away very quickly.

Eastern Hognoses (Heterodon platirhinos) show a variety of body colors depending on their geographical location. 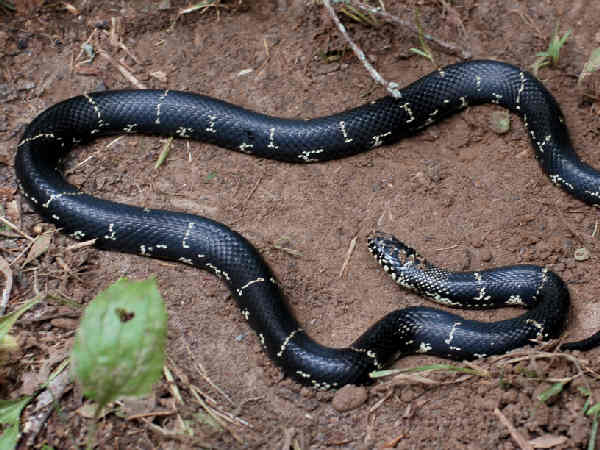 Almost everyone is familiar with the colorful kingsnakes and milk snakes. They are fairly popular in the pet trade and categorized as constrictors.

Humans need not worry, their popularity in the pet trade is an indication they are generally peaceful, nonvenomous snakes.

The picture under this heading shows the Eastern Kingsnakes (Lampropeltis getula). The log black body covered by a series of thin white bands down the back are the best identification clues.

Eastern Milk Snakes (Lampropeltis triangulum) are also adaptable snakes, inhabiting multiples areas from fields to forests to farms. Finding Milk Snakes in the east can be as easy as taking a hike and flipping over a few big rocks or logs. The can grow up to on average about three feet in length and the red to orange to dull rust color of the bands makes them easy to spot.

About eight subspecies of Milk Snakes are described in the United States. Maryland hosts the more common eastern milk snake along with a subspecies called the Coastal Plain Milksnake ()Lampropeltis triangulum elapsoides)

Now is a good time to also mention the Scarlet snake. As the picture shows, it’s easy to mistake the Scarletsnake (Cemophora coccinea) for a Milksnake or Kingsnake. They are a separate genera and fairly common in the Southeast.

Of course many types of snakes swim in and/or bask near ponds and lakes. Nonetheless, when seeing a long and bulky snake basking near or swimming in the state’s lakes and ponds it’s always a good first guess to start with waternakes.

The snake’s body color changes depending on age and location. Usually the Plain-bellied Watersnake (Nerodia erythrogaster) is called the Red-bellied Watersnake, with a range limited to the lower Eastern Shore. All other watersnake finds in the state can be identified as Northern Watersnakes.

The Black Rat Snake ranks as the most wide ranging of the species. The all black body makes it a fairly easy species to recognize.

Maryland is also home to corn snakes (Pantherophis guttatus). They can be found in many of the state’s forest areas.

Maryland has two venomous snakes, the Copperhead and the Timber Rattlesnake.