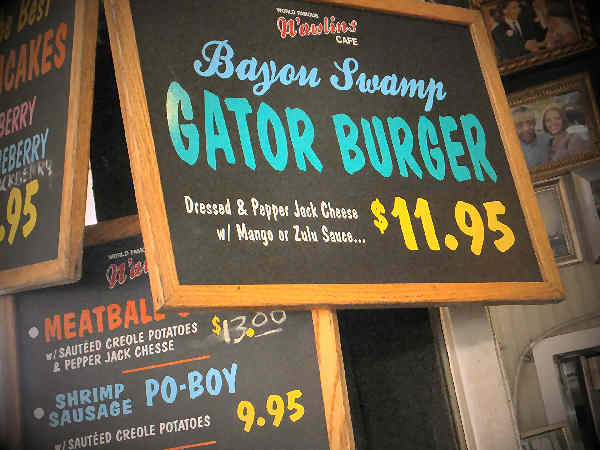 Welcome to Louisiana wildlife and nature stories. It starts with a few thoughts on the picture advertising a French Quarter specialty, Alligator sandwiches. Alligators, the largest reptiles in the United States, receive the official title of state reptile. The people of Louisiana have commercially harvested them since Jefferson purchased the land.

While over harvesting eventually caused population declines, a temporary halt to commercial harvesting plus a population management push translated into today’s couple of million alligator population. Lousiaina one again claims the crown of alligator capital of the United States.

The presence of reptiles and amphibians contributes to a high degree of biodiversity in the state. In fact, Louisiana ranks in the top ten of herp biodiversity.

About thirty frog and toad species and another two dozen or so salamander species account for the diversity. In the reptile category, snakes top the diversity list with around forty species present.

Whether they are called the Bayou, swamps, lakes or wetlands Louisiana’s water areas draw large amounts of water birds from a variety of families. They contribute a good deal to the Louisiana wildlife scene.

The video clip reviews a handful of common types of birds of the Louisiana swamps. Species from the groups can be found throughout the state, including in all the diverse water based New Orleans birding hot spots.

It starts off with the state bird, the Brown Pelican. Of course many people also rightfully associate Brown Pelicans with coastal areas. In fact, they are officially classified as marine based and are not found in the inland Louisiana lakes like the white pelicans.

During the winter months they can be seen feeding at Lake Pontchartrain.

About ten heron species and over two dozen duck species are present throughout Louisiana. The Black-bellied Whistling duck is probably the state’s most unique species. Louisiana and Texas serve as their northern most breeding areas and they do tend to congregate in large numbers, whistling constantly.

While American Coots have a range that extends across the United States, the Common Gallinule is a Southeast member of the Rail family.

Anhinga also get billed as another Southeast specialty bird, with most living year round along coastal areas. They have a slight resemblance with the Double-crested Cormorant.

Both species are avid fishers that lack waterproof wings. They are know for spreading the wings in the sun to dry after they get wet. It’s easy to find and photograph both of the species resting new water areas.

As the site grows, more information covering Louisiana will be added. Until then, press any of the following buttons to learn more about Louisiana nature.