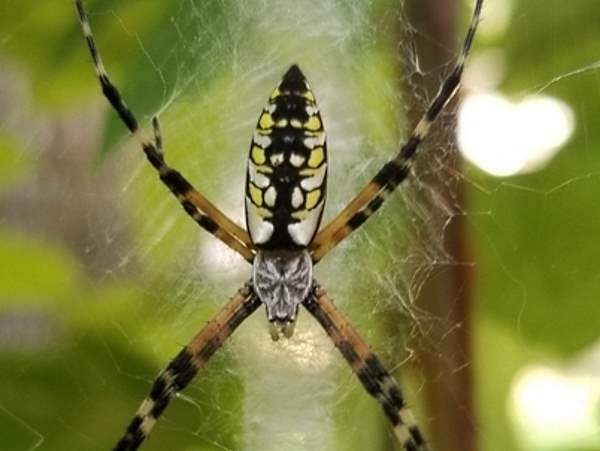 Yellow and Black garden spiders, like the one pictured at the top of the page, might be one of the most common of all the Kentucky spiders. Also known as writing spiders, the presence of a series of “Zs” on the web are a good identification clue.

Both the Yellow and Black and Banded Garden spiders are also probably the largest orb weaving spiders found in back yards throughout the state.

While less common, and smaller in stature, when it comes to Kentucky spiders, the Black Widows and Brown Recluse spiders are often the talk of the town. With good reason. They are the spiders of medical importance in the state and recognizing them in and around the house and yard are important for keeping the family safe.

A quick internet review finds stories of Brown Recluse discoveries somewhere in the state on a yearly basis. It’s important to note that despite the discovery of Brown Recluse spiders in local Post Offices or homes, the stories end with the fact that the spiders in question did not attack any of the building’s inhabitants.

The common name “recluse” supports the fact that the spiders really want to avoid human contact. They are night hunters that remain hidden in crevices, crawl spaces and the like during daylight hours.

Fortunately, Black Widow spiders are not known to build their cobwebs indoors. The only cobweb spiders found in the home are harmless, except for the messy webs they build. They can build their messy webs around the yard, so checking for the all black body of the female around sheds and barbecues represents the best preventative measures for keeping the yard safe.

That quick introduction implies that the vast majority of the over five hundred additional Kentucky spiders pose no danger to humans, except for the few that have sensitivities to most insect bites.

In fact, those same spiders can often be beneficial around the house and garden because they prey on insect pests.

The green spider button at the top of the page leads to information covering most of the common house spiders as well close to one hundred common spider species.

Scroll down to finish the introduction. Like almost every state, the sheetweb and jumping spiders rank as Kentucky’s most diverse families of spiders. Multiple species can often be found in back yards. 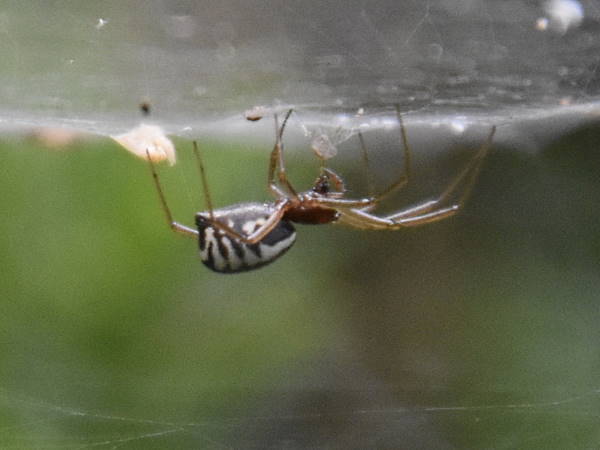 Truth be told, almost no one except for experts deals with sheetweb spiders. The messy, flat webs webs hanging on the shrubs around the yard become ubiquitous over the course of time. Often the spiders spinning those webs are very small and unobtrusive.

Bowl and Doily spiders are probably the most recognized of the sheetweb spiders. The top of the web is bowl shaped, giving the spider its common name. 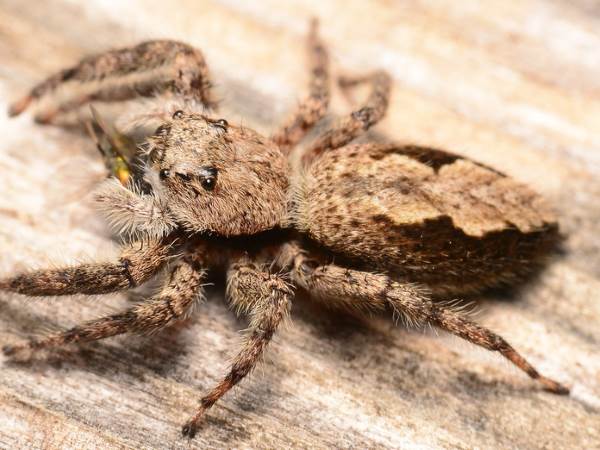 Bright colors on the abdome make the Phidippus jumping spiders the most commonly noticed around the yard.

However, its interesting to note that the presence of over three hundred native jumping spider species divided into over sixty genera means that many of Kentucky’s jumping spiders go unnoticed. Some of the less noticed species are very small and resemble ants.

Platycryptus is one of those less well known jumping spider genera. The Tan Jumping Spider (Platycryptus undatus) live in most residential areas around the state.

The picture shows its brown body. Females can grow up to one-half inch in length, making them fairly easy to notice around the yard. 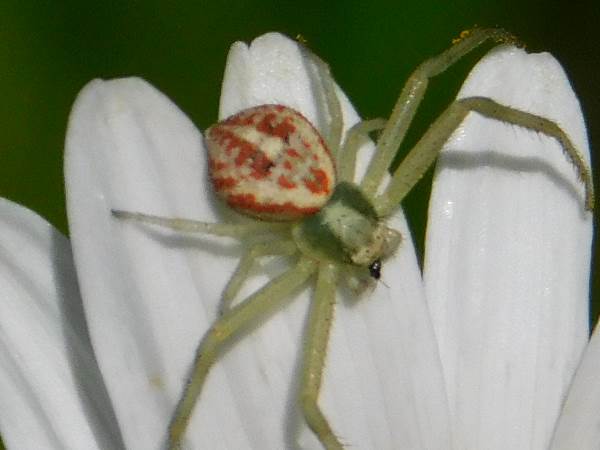 Crab spiders can easily be recognized by their color and the way they hold their legs.

Three similar types of crab spiders can often be seen on flowers in the back yard. They have yellow or white bodies with some colorful markings like the Northern crab spider in the picture. 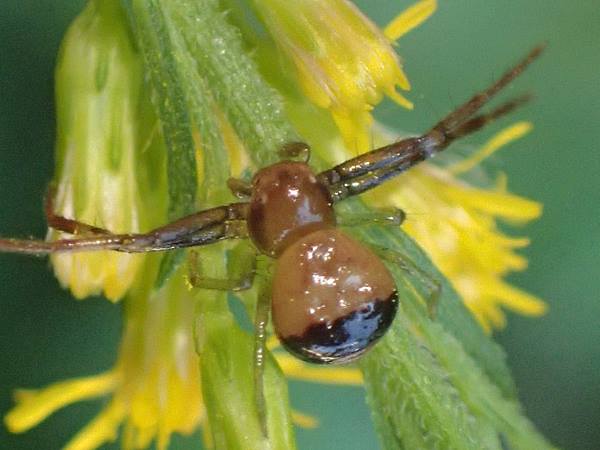 The most bland looking Synema paryulum might not get as much attention. The two toned color of the abdomen makes it easy to identify. 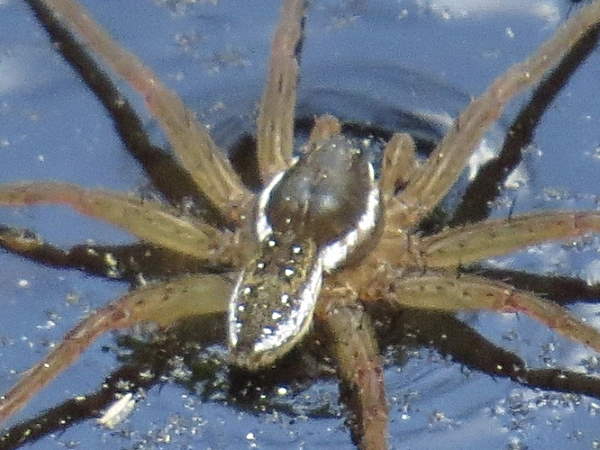 With a common name of fishing spiders, it’s reasonable to assume that they lives near Kentucky’s streams and forests, including woodlots.

Residential areas in these habitats can find they in their yards, and occasionally find them in the home.

According to the University of Kentucky, these are probably the state’s largest spiders, measure over an inch in length, including the legs.

The Six-spotted Fishing Spider is the easiest of the fishing spiders to identify. It’s the only one with the almost solid color body and six spots on the abdomen. 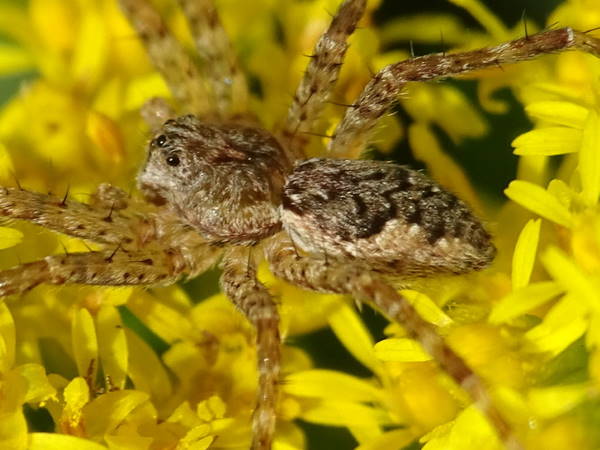 A bit of finesses is often necessary for sorting through most of the Kentucky fishing spiders. For example, Dolomedes Vittatus and Dolomedes Scriptus both have white markings on the abdomen. Both are widespread in the East and most of the Midwest.

The name scriptus suggests script, and typically the more pronounced white kind of “W” script on the abdomen suggests that species.