Kentucky snakes come in a variety of sizes and colors, from the small brown earthsnakes to the large ratsnakes. Three of the larger Kentucky snakes, Black Racer, Black Ratsnake and Black Kingsnake have ranges that extend across the state. Their overlapping territories makes it easy for the average person to misidentify them. After all, the average person often only wants to know if the large snake in their yard is dangerous.

Fortunately, the answer is no. Racers, Ratsnakes and Kingsnakes all belong to a family of nonvenomous snakes. They actually can be considered beneficial animals because they help keep the rodent populations down. Kentucky does host three of the four native venomous snakes, copperheads, cottonmouths and rattlesnakes. That’s a different story.

This article focuses on the colorful world of Kentucky snakes with the goal of answering some very basic snake identification questions. It covers six different species that at the very least share some similar physical features that might easily lead to a misidentification.

The top picture, for example, shows an Eastern Milk Snake. It’s one of three species in the Milk Snake family, (Lampropeltis) present in Kentucky that could easily be mistaken for each other.

Eastern Milk Snakes are by far the most common of all the species presented on this page. Their range extends across the entire state.

Their ability to adapt to multiple habitats such as fields, forests and farms partially explains their wide range. Finding them can be as easy as taking a hike and flipping over a few big rocks or logs. The can grow up to on average about three feet in length and the red to orange to dull rust color of the bands makes them easy to spot.

To the uninitiated, the muted brown colors of the Prairie Kingsnake could easily lead to a misidentification of the snake as a faded milksnake. Milksnakes do come in a variety of colors. However, this species is in the same family, and it’s a completely different species.

Prairie Kingsnakes spill over into western Kentucky from their home range, the Midwest. They inhabit open areas of fields and forests. 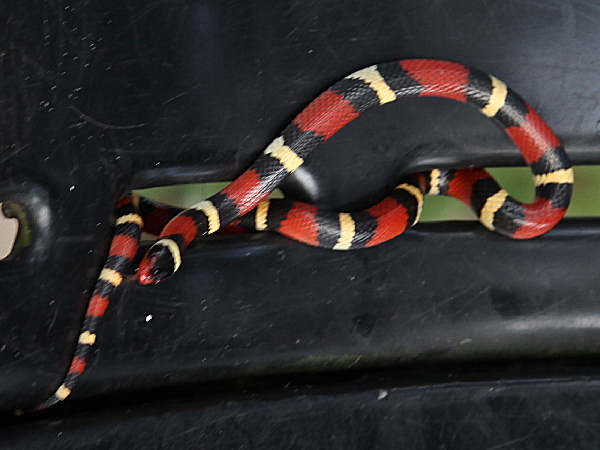 Bold red, black and yellow rings around a snake are the best field identification clues for the Scarlet Kingsnake. (Lampropeltis elapsoides). They are also primarily a southern species that reach the northern edge of their range in southern Kentucky.

Red Rat Snakes or Corn snakes (Pantherophis guttatus) are are most plentiful in the longleaf pine forests of the Southeast. Only two small populations exist in Kentucky.

It’s easy to mistake the Scarletsnake (Cemophora coccinea) for a Milksnake or Kingsnake. They are a separate genera and while they have a range that extends through all but northern Kentucky, their populations are very small. An all white belly is a great field identification clue.

Snakes in the genera Farancia, don’t get much copy or recognition, primarily because they inhabit areas most often not inhabited by humans. One species, the Mud Snake, lives in the muddy waters of western Kentucky.

The picture shows the Mud Snake, a striking black and red colored snake. Mud Snakes consume water based amphibians such as sirens and salamanders.

Of course it does not share many physical features with the previous five snakes. However, for the less than observant person who sees red on a snake, here it is.