A quick internet search reveals that Arachnophobia is alive and well in Iowa, as it is in so many areas. On the bright side, around ninety nine percent of Iowa spiders can be considered beneficial. In a state where farms dominates the landscape that’s a good thing.

In fact, agriculture also dominated most of the spider research of the past few decades. For example, the Journal of Arachnology, for example, published on of the earliest review of the literature covering Spiders in US Field Crops back in 1990. They document over six hundred species divided into over two dozen families. Additionally, the article notes the types of insect pests that the spiders attack.

By extension, the research also suggests that the presence of spiders in the residential areas and back yards around the state also means a celebration of Iowa spiders.

Of course there are always exceptions to the rule. According to Iowa State, the Black Widow and Brown Recluse, two spiders of medical importance, are present in the state.

Brown Recluse spiders are more common than the Black Widow spiders. They are identified by the presence of a violin mark on the cephalothorax, or top part of the body under the head. Even better news, they are very wary of human engagement.

They do stray indoors. Normally the only bites recorded and documented come instances where the spider was in clothes or shoes and was unintentionally forced against a person’s skin.

Black widow spiders don’t often stray indoors. Instead, if, and it is a big if, they are found around the home, it would be in tangled cobwebs near barns, sheds or furniture that are not often cleaned.

Only the bite of females are poisonous and they are identified by the red hourglass marking on the bottom of the abdomen.

This article focuses on some common types of spiders found in residential areas and parks around the state. Common names, such as orbweavers and jumping spiders are familiar to most people. Individuals interested in additional spider identification help are invited to press the green spider ID button. The guide documents over one hundred additional common spider species. 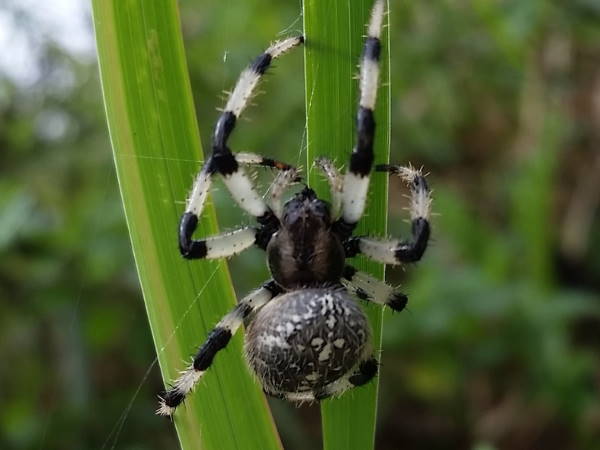 Orbweavers might rank as the most commonly seen spiders around the neighborhood. There might be more smaller spiders, however, the large, round webs often built around eye level insures that the orbweavers get noticed. The first picture shows a Shamrock Orbweaver. With a name like Shamrock Orbweaver, one might expect a spider with a green body. In fact, this is one of the most colorful of the Araneus spiders. Female bodies come in a variety of colors including green, red, orange, brown, tan and gray.

The circles on the abdomen and the banded legs are good field identification guides. Usually they appear during the late summer to early fall in Iowa. 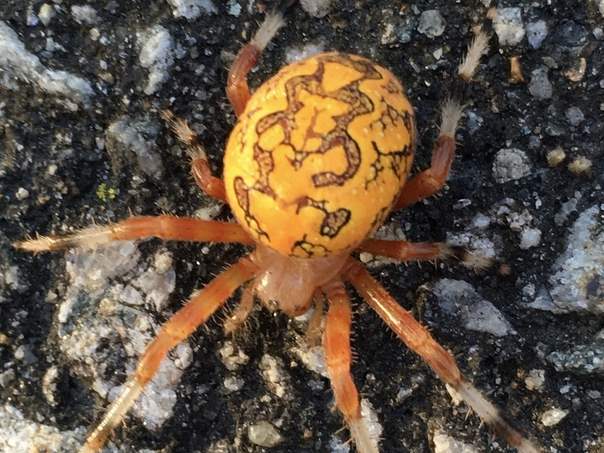 Marbled Orbweavers, a fairly common Iowa spider, is also one of the larger orbweavers. While the body is often orange, the color can change to shades of white and yellow.

Like the Shamrock Orbweaver, they are normally summer spiders that vanish by late fall, leaving their egg sacs protected for overwintering.

Moving away from the Araneus genus, a variety of other orbweavers also can be found in the state.

The color shading on the body may change, but the lack of a pattern and otherwise dull looking spider are great starting ID clues for the Spotted Orbweaver (Neoscona crucifera).

Add some dark has marks down the middle of the abdomen and the species changed to the Arabesque orbweaver. 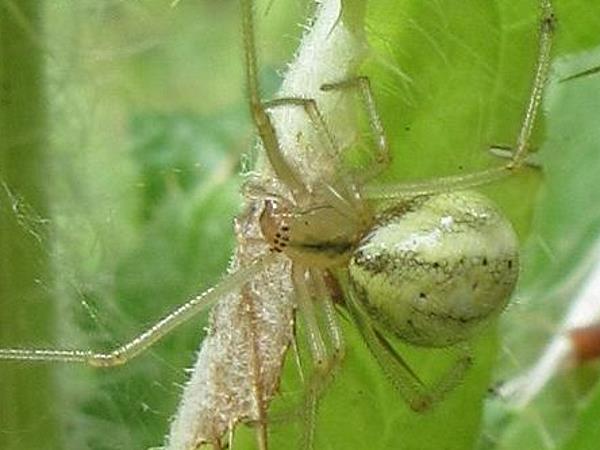 Not all the cobweb spiders need to be feared Probably one of the most common cobweb spiders people see outside the residential environment is the Candy-striped Spider Cobweb (Enoplognatha ovata). Sometimes they have a red striped abdomen.

Look for it lying on the top of leaves. The two front legs are very long. 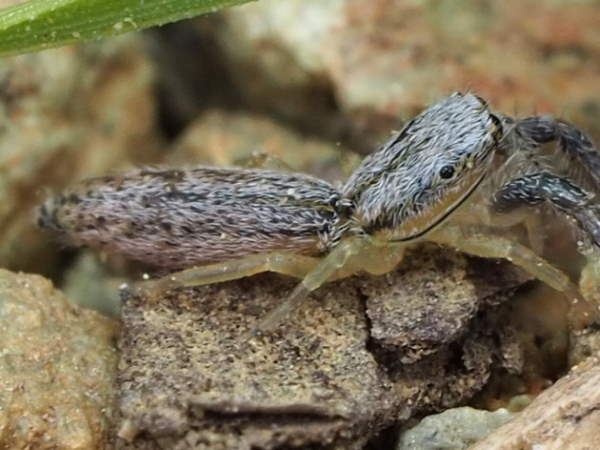 Like most of the United States, jumping spiders will be the most diverse family of Iowa spiders that catch the attention of people. Bronze jumping spider (Eris militaris). It’s widespread across the country.

Some of the larger more colorful species such as the Phidippus can easily be seen on bushes and plants in the back yard.

The picture shows the Pike Slender Jumper. It stands out because of its slim body. 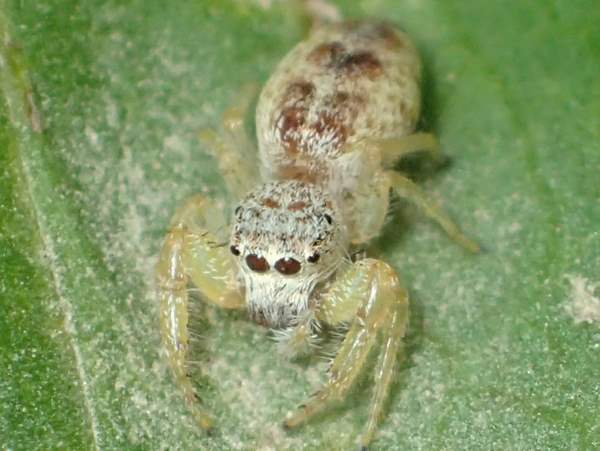 There are four Hentzia Jumping spider species in the Midwest and East Coast. Hentzia palmarum, along Hentzia mitrata, the the white-jawed jumper, are the most common.

Here’s the White-jawed. it might take a decent macro lens to see the white face and jaws. They are good identification clues. 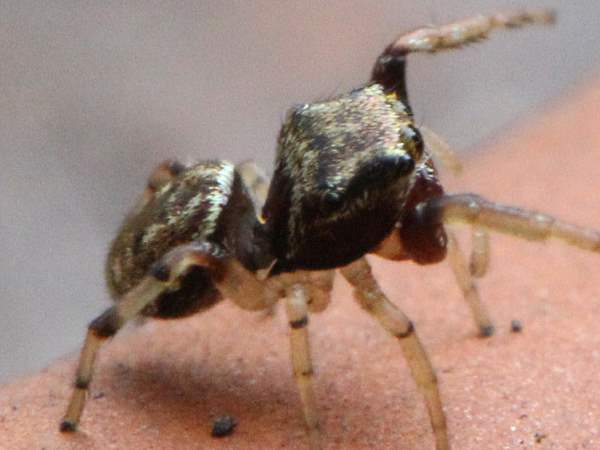 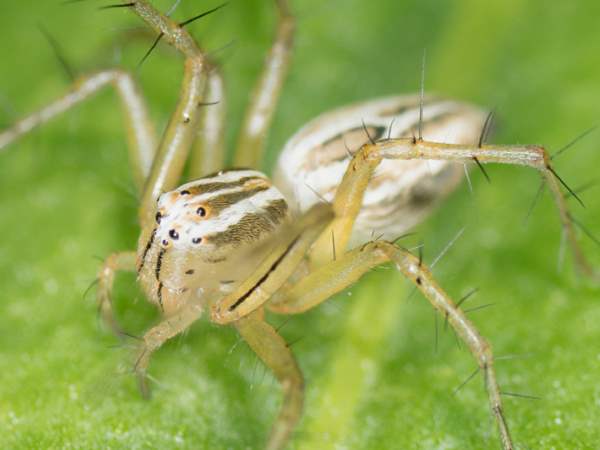 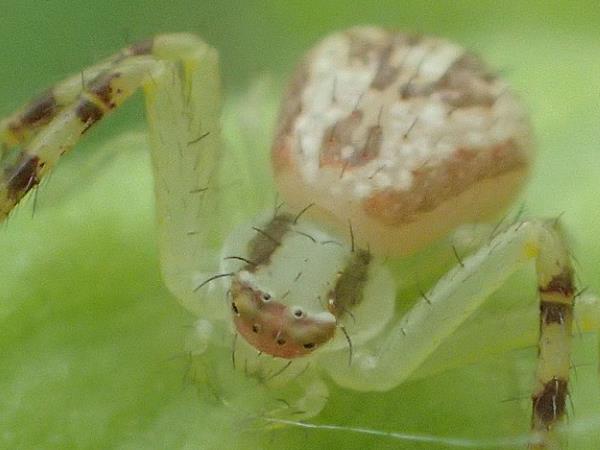 Most people have at least an introductory understanding of crab spiders. They often get linked to the general flower crab spider category. It gets a bit more complicated with 130 species in 9 genera documented in the United States.

The more colorful species found on flowers cover a few genera. Rather than color and body pattern, body hair and eye arrangement are used for formal identification.

If you see a hairy Crab Spider like the one in the picture, it’s one of the over one dozen Mecaphesa species. At least one hairy spider species is found in every state. 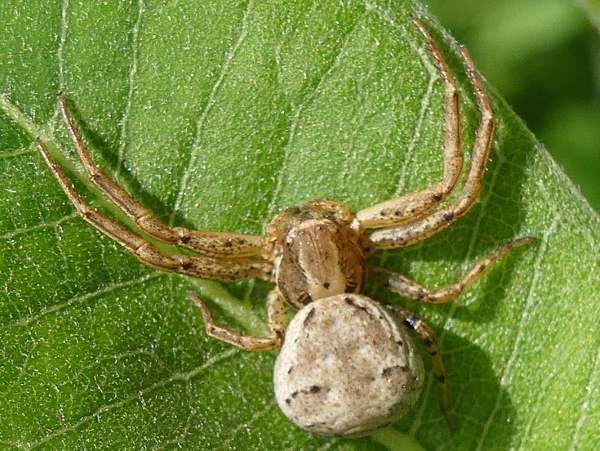 The three dozen Ground Crab Spiders, Xysticus, switch between light and dark color bodies. They normally don’t grow much over one-quarter of an inch in body length. The manner in which they stretch their legs makes them look a bit larger, and sometimes more easily seen on vegetation or branches.