While almost everyone is familiar with the pond and lake ducks, more often than not the average person needs to take a second look at one of their companions, the Grebes. The second look reveals a family of diving water birds with a strong presence in the West and an intermediate presence in the rest of the country. Only one species, the Pied-billed Grebe, shown in the video, has a presence in many ponds and lakes across the United States. About one foot in length, with brown feathers, adults having a dark streak on the bill. They live year round in most of the United States. A quick glance down to the pictures on the page also shows that the Pied-billed Grebe is the only native species without the red or orange eyes.

Most of the species flock to the very northern states to breed during the summer. Pairs bond by what is described as walking on water or dancing on water in showy courtship displays.

The six additional Grebe species with a presence in the United States are highly migratory. 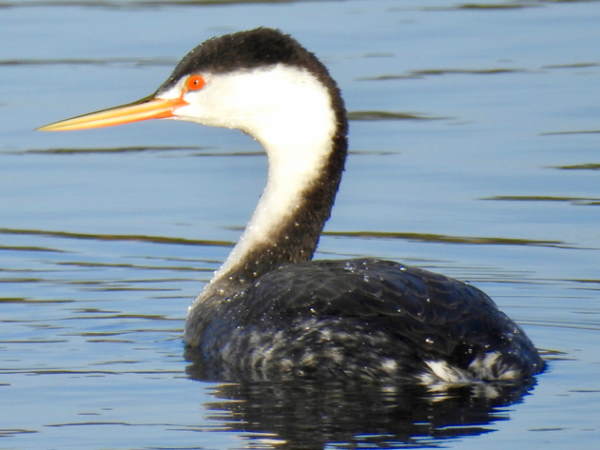 The stories of the Clark’s and Western Grebes have been intertwined ever since the first sightings and identification of them occurred. They look very similar, hang out at similar breeding areas during the summer and winter along similar West Coast areas. Both grow to about two and one-half feet in length, making them fairly easy to spot in the water.

A comparison of the pictures of the Clark’s grebe with the Western Grebe many physical similarities. On the Clark’s Grebe, the black feathers on the top of the head extend down past the eyes. By 1985, those physical differences along with DNA testing demonstrated that the two were sufficiently different to give them both species status. 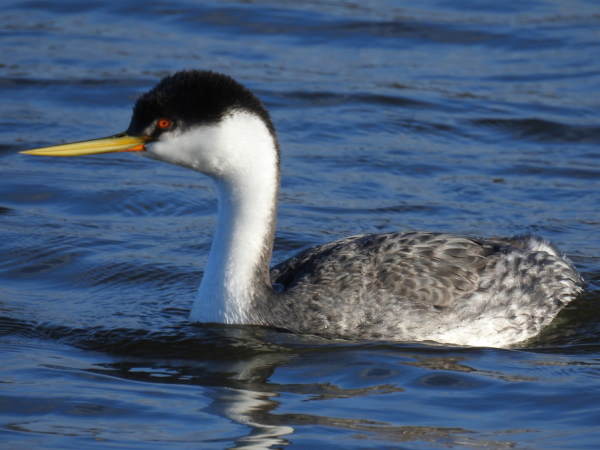 Western Grebes do have a wider year round presence that extends through much of the Southwest where freshwater ponds and lakes provide adequate food and shelter. Eastern birders who visit the West often have the Clark’s and Western Grebes on their must see life’s list. 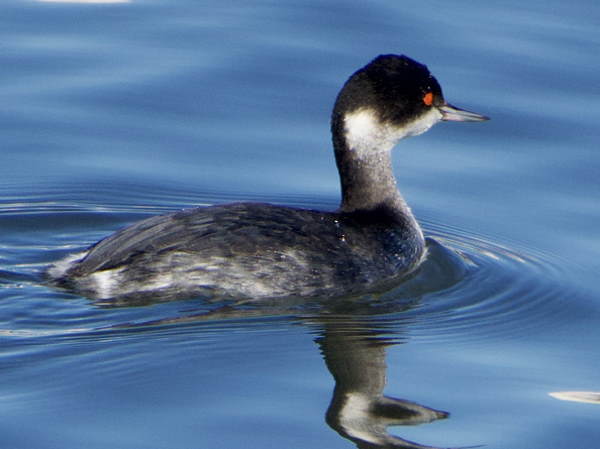 About the size, or slightly smaller than the Pied-billed Grebe, the Eared Grebe is best known as most social, and abundant family member. Reports of their breeding in Eastern Washington lakes in the thousands or wintering in Salt Lake in the thousands are fairly common. Additionally, their wintering range extends as far east as the Texas Gulf Coast. 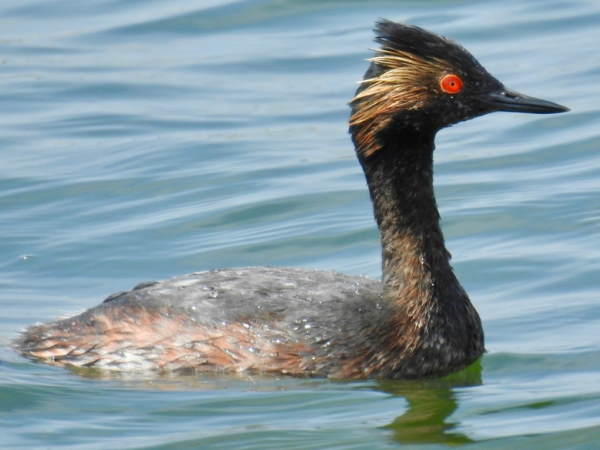 The pictures tell the tale of a bird of many feathers. The first picture shows the Eared Grebe during winter with a relatively dull coast of feathers. Come breeding season the feathers on the neck darken substantially and the brown to yellow feathers along the side of the head really stand out. 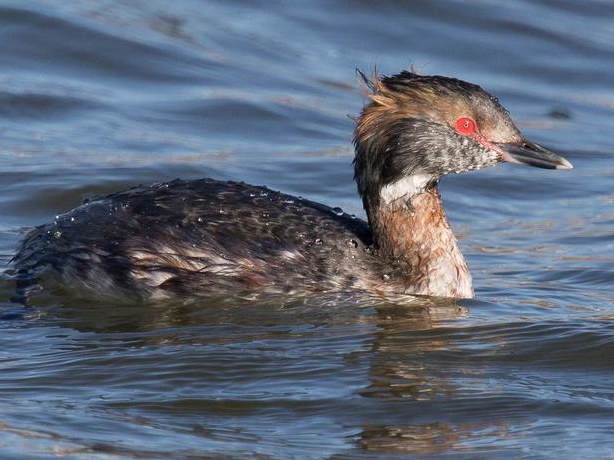 Horned Grebes look very similar to the Eared Grebes. At a little over a foot in length, they are generally a tad bit larger than Eared Grebes. However, it can be difficult to tell them apart by size when they are not together. They take their breeding places further north than the Eared Grebes, with the majority of breeding across the Canadian border. 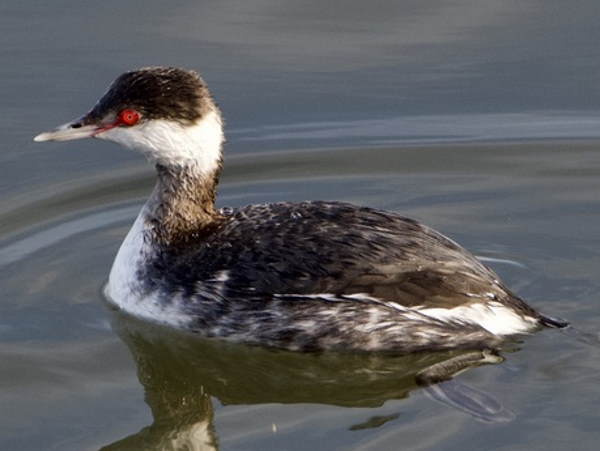 During nonbreeding season, the red-eyeline, visible in picture, round head and very white feathers on the front of the neck and bottom of the face are good field identification clues. During the winter season their range extends further east than the Eared Grebes, scattering across much of the Southeast. 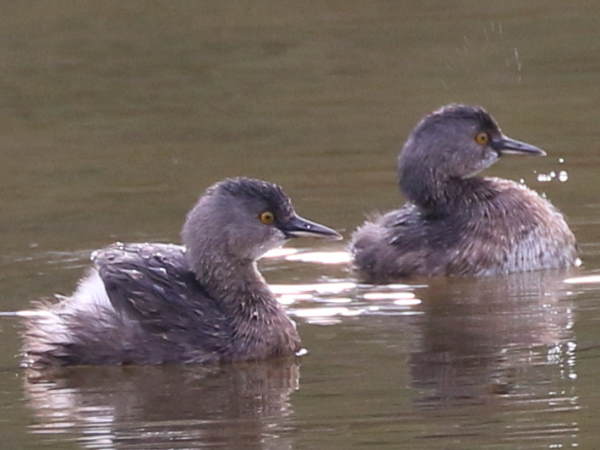 The Least Grebe grows less than a foot in length. Yellow eyes are brown feathers are a good way to spot them in South Texas. 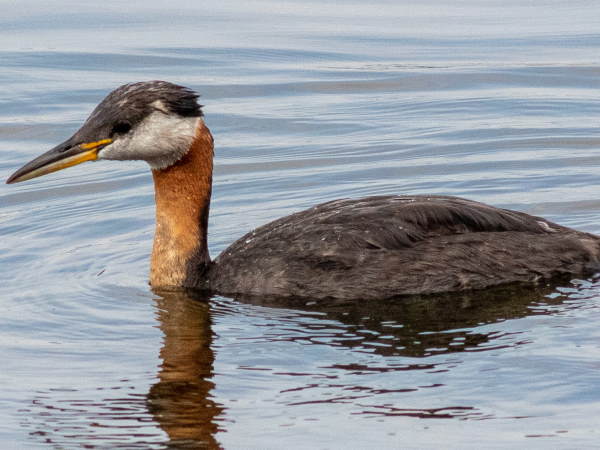 Red-necked Grebes rank as the other less than common Grebe species. They breed in Alaska and Canada, with a very small breeding presence in the northern most areas of the United States. Occasionally they can be found along both the northern Pacific and Atlantic coasts during the winter. The red neck makes for easy identification.

Please press the green birds button at the top of the page to browse through all the bird families covered here at Green Nature.