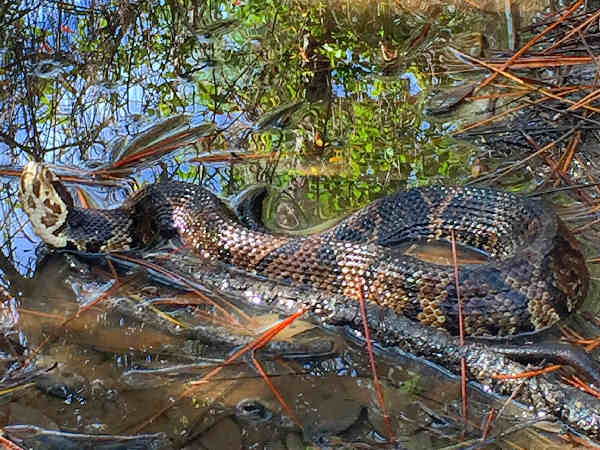 Where do you want to go to find Georgia snakes? It might be a surprising question for some, but for snake enthusiasts, Georgia is a great place to find snakes. Why? First and foremost, the southern climate is snake climate. Apart from the Southwest, including Texas, snake diversity is at its highest in the Southeast.

Formal numbers for Georgia snakes tend to change as snake taxonomy changes. Currently the state hosts approximately forty species. Georgia geography, roughly divided into he coastal plain, the Piedmont and the northern mountain areas means that not all Georgia snakes live in every environment.

Still, there are more than enough Georgia snakes to go around for all areas of the state. For example, Chatham County, a small coastal region that includes Savannah hosts thirty snake species, including all six of the venomous snakes. In the northern Piedmont region, home to the Atlanta metropolitan area and the Chattahoochee River National Recreation Area, twenty-two snake species have been documented.

So, the answer to the question of where to find Georgia snakes is, almost everywhere. This review highlights some of the more common Georgia snakes. Please press the snakes button for additional snake pictures and information.

Like many of its neighboring states, Georgia hosts six venomous snakes.

Given the fact that at least one of these six species inhabits all areas of the state, included the heavily traveled coastal areas, tourist inquiries are understandable.

Southern areas of Georgia provide the natural habitat needed for all but the copperhead because hardwood forests are their preferred habitat. Coralsnakes are very rare in the state.

Cottonmouths or Water Moccasins are common in the state and that leads to many people misidentifying them with the resident water snake species. According to the Georgia Department of Natural Resources:

The two most common water snakes in Georgia, banded and northern, have bands that are widest on top. Juvenile and patterned adult water moccasins have ‘hollow’ bands that are widest on the sides and appear to be hourglass-shaped when viewed from above. Also, most water moccasins have a very well-defined dark stripe on the side of the head that runs from the back
of the eye toward the corner of the jaw. The only water snake species with any semblance of a dark stripe on the side of the head is the banded water snake, and the stripe is a poorly-defined one, at best.

The picture shows a Cottonmouth snake. Note how the angle of the picture highlights the wide side bands. 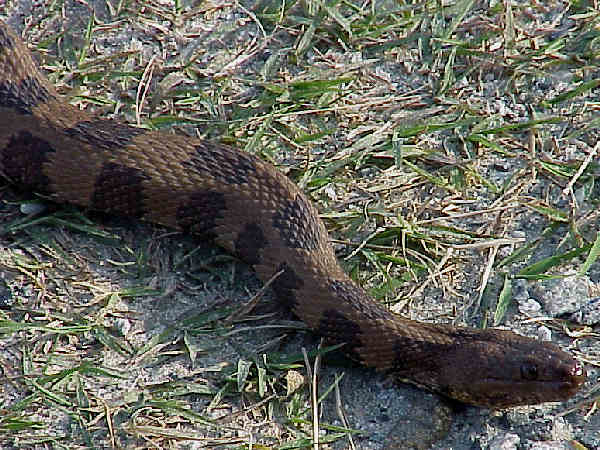 Many Georgia snakes inhabit ponds, rivers, lakes and swamps around the state. The common name water snake applies to five species in the genus Nerodia that live in the lakes and ponds of the state: Older specimens of water snakes can be difficult to identify because their bodies tend to turn darker with age, eliminating the usual physical identification clues. The bold color on Red-bellied Water Snakes might be one exception to the rule.

Geographic placement of the snake can help. The Green Water Snake, for example, is only found along the Georgia southern border. The picture shows a brown watersnake. The dark blotches on a brown body are the best field identification clues. 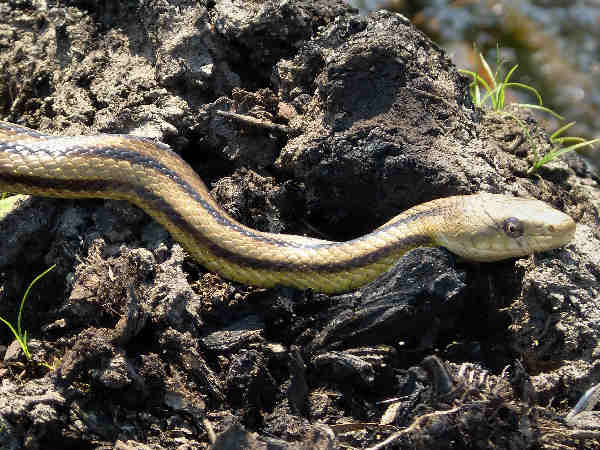 Beach goers might cross paths with the Yellow ratsnake. They inhabit areas along coastal Georgia. All three subspecies are adapted to human living environments, and can often be found in residential areas climbing trees. Their primary diet is rodents.

Adults can grow over six feet in length and their sheer size scares people. There’s nothing to worry about. They are nonlethal snakes that normally want to avoid human contact. Often they are just passing through the neighborhood looking for food.

Corn snakes (Pantherophis guttatus) are the smaller relatives of ratsnakes and they are also common in Georgia, especially in the longleaf pine forests. Like other rat snakes, they too are known for climbing trees.

Georgia hosts two very common Coluber snakes that go by the name racers and whipsankes. They are constrictors.

The snakes best known as Black racers adapt to all Georgia habitat from the coastal areas of the south to the mountains of the north. They are long, thin snakes with a black body, and as the picture highlights, white chins.

With the exception of the most northern mountains, the Eastern Coachwhip (Masticophis flagellum) is also a very common Georgia species. Many of the subspecies have different color patterns from red to yellow to brown to dark to tan. 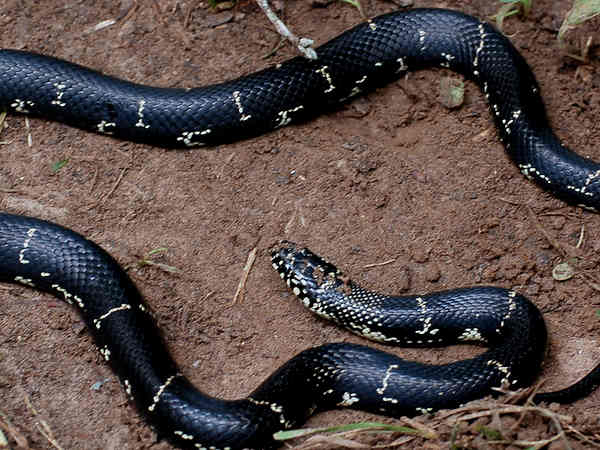 Kingsnakes experienced some evolutionary good fortune. They are immune to the bites of Georgia’s venomous snakes, placing them at the top of the Georgia snake pecking order.

Like other constrictors, they bite their prey and then proceed to wrap their body around it until it can no longer breath. Humans need not worry, they are otherwise peaceful and nonvenomous snakes.

Eastern Kingsnakes (Lampropeltis getula) generally have a black body with with a series of thin white bands down the back.

Georgia is also home to two subspecies of milk snakes. While the ranges are not perfect, usually the milksnake is more common the the mountains and the Scarlet Milk Snake inhabits most of the Piedmont and Coastal areas. The picture shows the Eastern Milk Snake.

For identification purposes, the Scarletsnake (Cemophora coccinea) also gets into the conversation because as the picture shows, it looks very similar to a Milksnake or Kingsnake. They are a separate genera and fairly common in the Southeast. 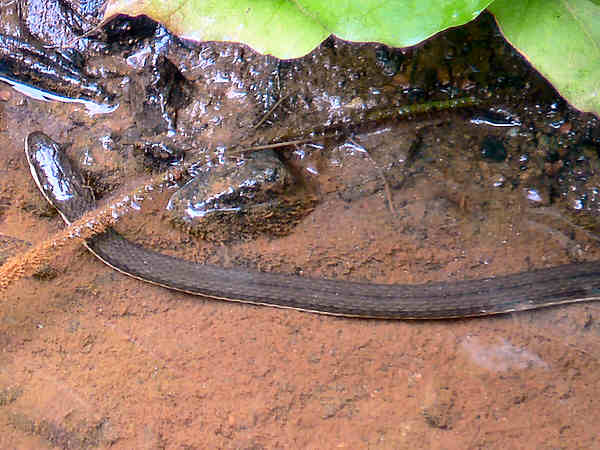 Queen Snakes (Regina septemvittata) are fairly common snakes in eastern areas of central and north areas of Georgia where rivers and streams run. The picture shows it’s a rather nondescript species with a dull body color and light stripes on the sides.