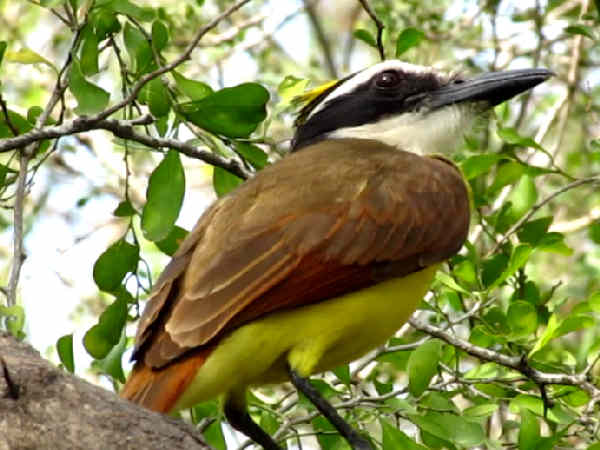 Flycatcher identification begins by noting that the approximately four hundred Tyrannidae arranged in over one hundred genera makes the Tyrant Flycatchers (Tyrannidae), one of the most diverse new world bird families.

The forty six North American species that migrate to and from North America on a yearly basis, also makes them one of North America’s most diverse bird families. Empidonax flycatchers and Tyrannus kingbirds account for almost half (21 of 46) the species.

Unlike many other tyrant flycatchers, they are omnivores that actively hunt for small fish, amphibians, reptiles, insects and other birds.

Known primarily as perching birds, all flycatchers tend to sit on tree branches and fence posts, scanning for insects in their territory. During migration they are common visitors to residential areas across North America.

Professionals and birding enthusiasts keep track of flycatcher population numbers as a tool for gauging riparian forest ecosystem health throughout the country. The Southwestern Willow Flycatcher is a subspecies listed on the U.S. Endangered Species list. There are plans in place to restore the riparian habitat in its range.

According to the U.S. Fish and Wildlife Service, the Guam broadbill, a small flycatcher from the island, was removed from the Endangered Species list in 2004 and is now considered extinct. 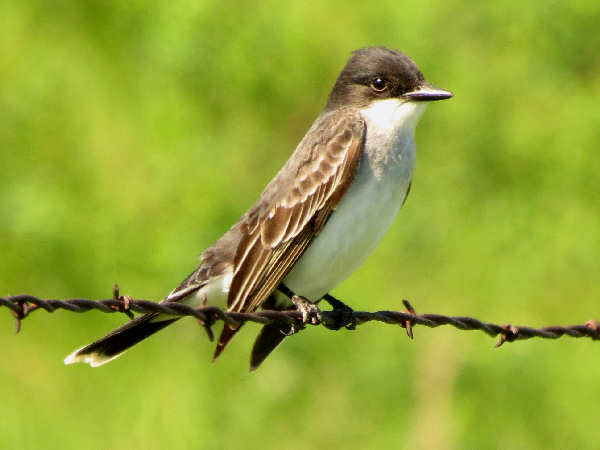 The Eastern Kingbird represents the Tyrannus genus for most of North America, with a range that extends from the Rocky Mountains to the East Coast. 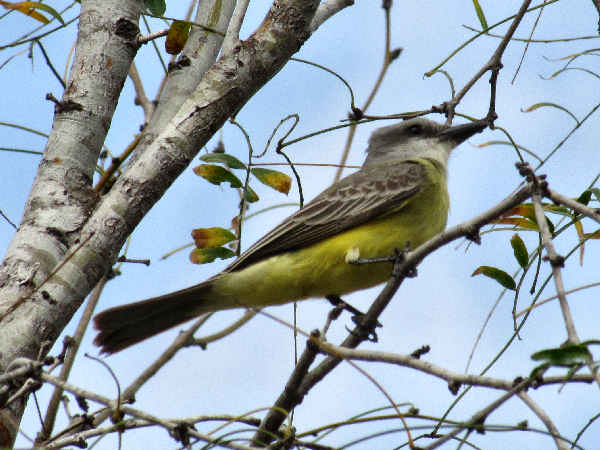 The picture shows one of the less common kingbird species, the Tropical Kingbird (Tyrannus melancholicus). 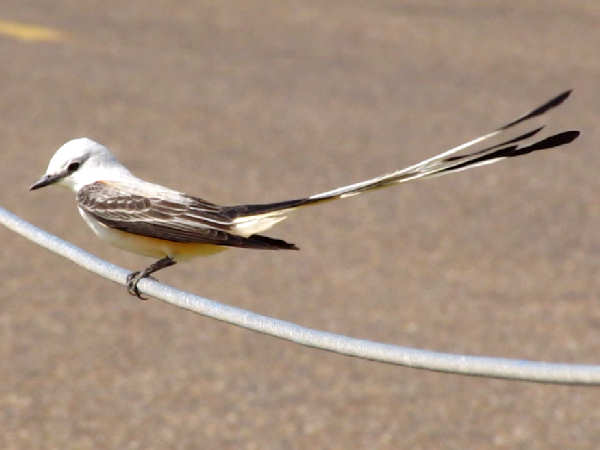 Flycatcher identification gets easy with the Scissor-tailed Flycatcher. Technically it fits into the Kingbird genus. 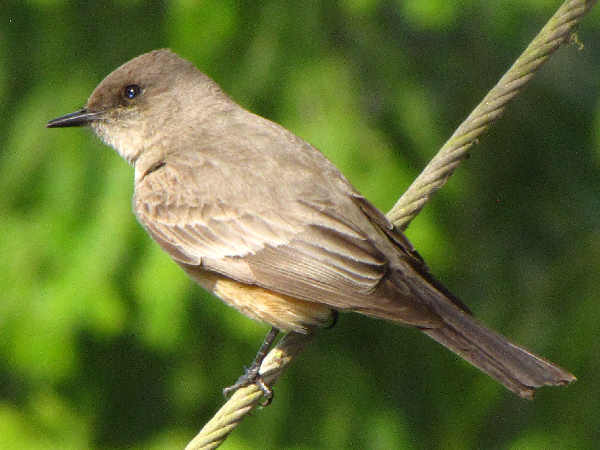 They winter in Mexico and the Southwest. Breeding season means a migration as far north as Alaska.

The pictures shows the bird’s rust colored belly and lighter color throat area. The gray to brownish feathers on the head and back are fairly common flycatcher features, as is the darker tail.

As they perch, waiting for insects, they tend to bob their tail. 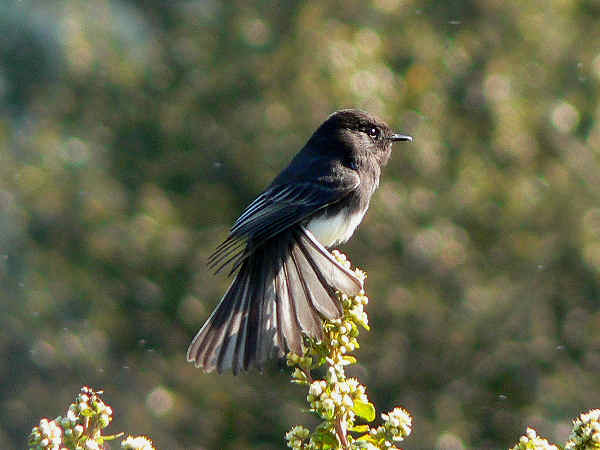 With the exception of darker feather colors, the Black Phoebe (Sayornis nigricans), resembles the Says Phoebe.

Most buck the usual trend of migrating flycatchers, with many taking up year-round residence in a wide variety of open habitats in California and the Southwest, including residential areas. Black feathers on the top of the chest differentiate it from the more common Eastern Kingbird. 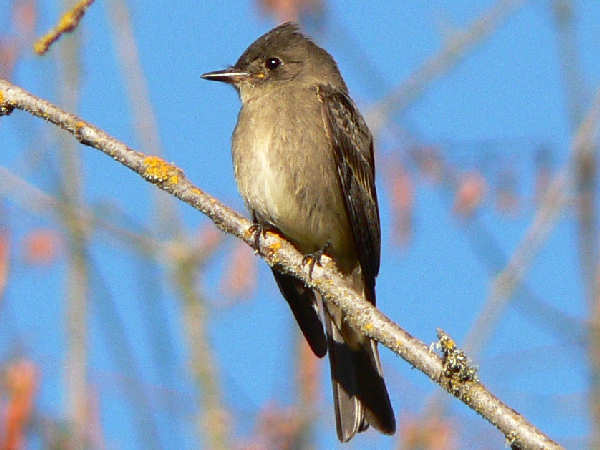 The Western Wood-Pewee (Contopus sordidulus) inhabits forested areas throughout the Western North America during the summer breeding season. During winter, they migrate as far south as northern South America.

The picture shows a Pewee in its usual perching status, on the look-out for insects, but still not too busy for a photograph. 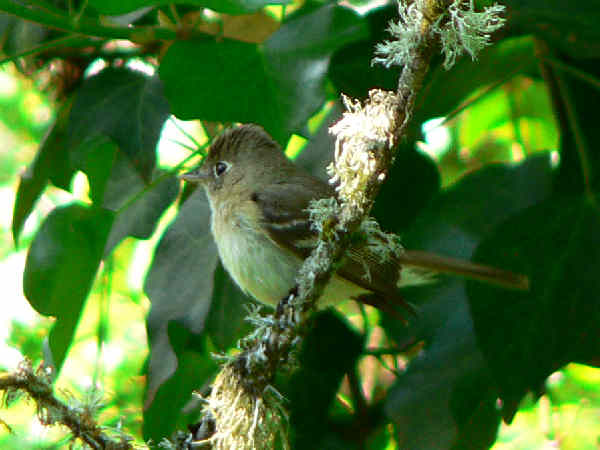 The eleven Empidonax species share physical characteristics such as being small to medium sized forest birds, with brown or olive feathers that helps them blend into their environment.

In areas hosting multiple Empidonax species, flycatcher identification for any one species can be challenging.

It breeds along the forested areas of western North America. During winter they migrate to the coastal areas of Western Mexico. 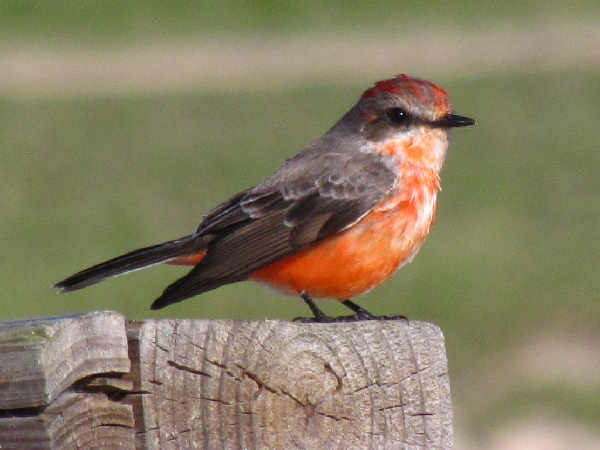 They are predominantly a tropical species, with the bulk of their population located in Mexico, Central and south America.

The picture shows a male. Females have brown feathers with a light shade of red on the underside.

The Ash-throated Flycatcher, the most common Western Myiarchus species, spreads its wings from Southern Oregon, west to Southern Texas.

The rust color in the bottom of the wing feathers serves as a good field identification clue.