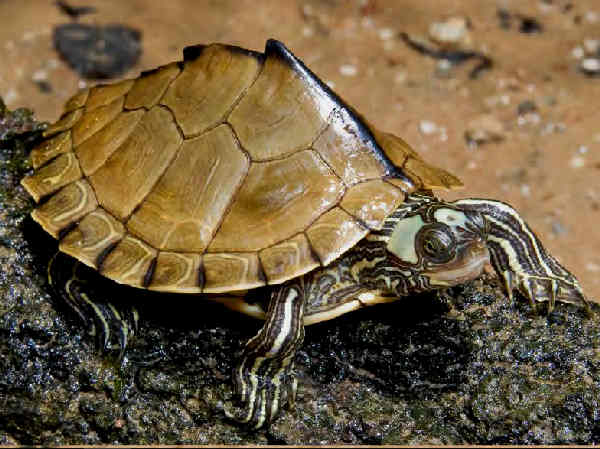 Three cheers for Florida turtles. The state ranks as the most diverse turtle state in the United States and also as one of the turtle diversity hot spots around the world.

Ample freshwater areas and the temperate climate of the northern part of the state explains much of the Florida turtles diversity story. On any given warm day, a trip down the Suwanee River, for example, provides tourists with views of dozens of basking water turtles occupying fallen trees and branches around every river bend.

Add the sea turtles that nest along Florida beaches and turtle fans can find a species or two to photography almost every day of the year. Here’s a quick run down of the Florida turtles. Scroll to the bottom of the page to see the Florida sea turtles. 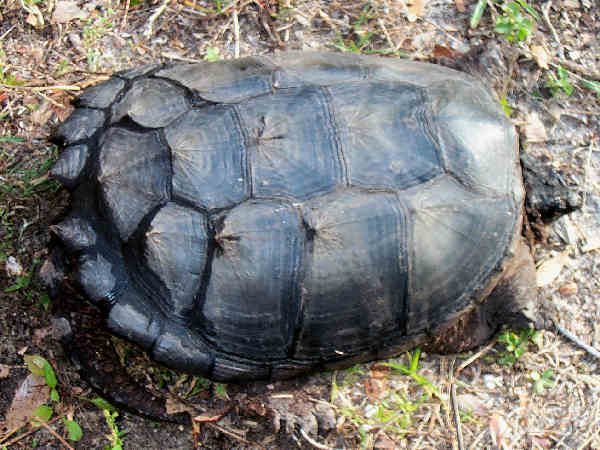 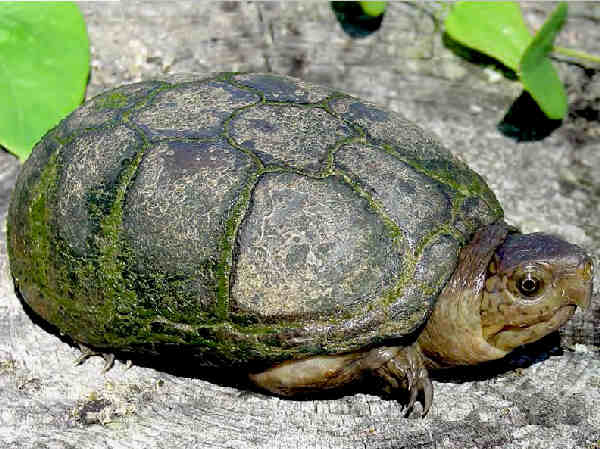 Four species of Mud turtles and Musk turtles can also be found in most areas of Florida. They are best known as small (less than six inch shells), nondescript turtles.

In addition to size as a key identification trait, the stripes along the shell of the Striped Mud Turtle represents a good field identification clue. 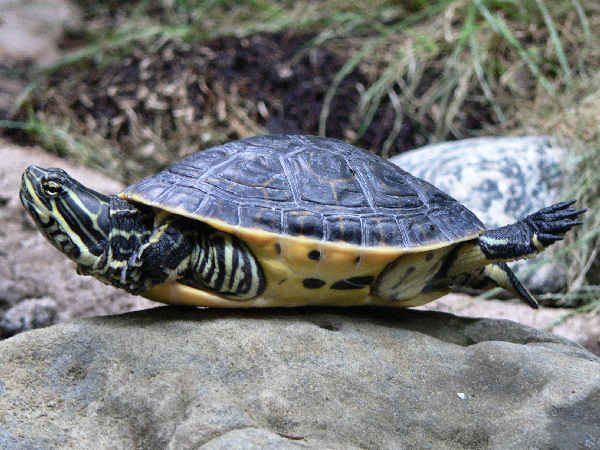 Most people associate Florida turtles with the family Emydidae, the fresh water turtles. Florida counts thirteen species, listed below. Most of these species can be spotted in river and other wetland areas in the panhandle and the northern areas of the state. Fans of Florida turtles need not fret. 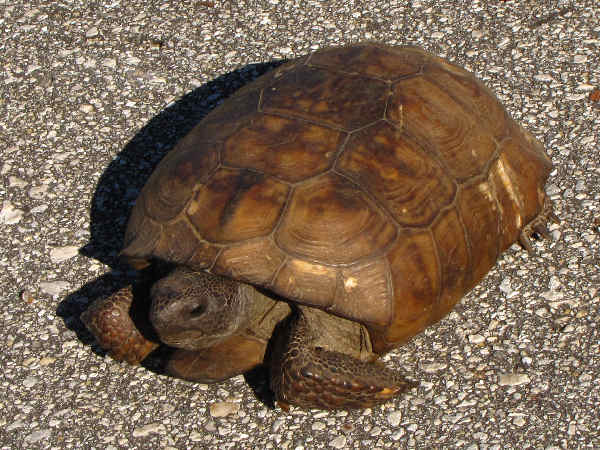 The Gopher Tortoise (Gopherus polyphemus), pictured, inhabits sandy soil areas in the Southeastern United States from Florida to the eastern parts of Louisiana. They live year round in large burrows, often measuring thirty feet in length. During the day they emerge to bask in the sun and forage for food, mostly plant life. 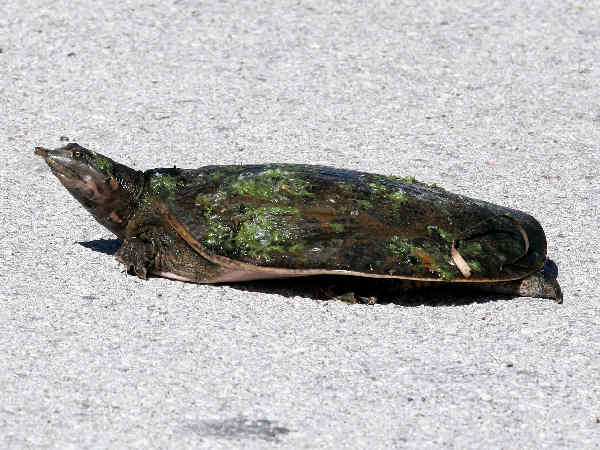 Softshells are fairly large turtles that inhabit most of the same waters as their hard shell relatives. They are easy to spot because they bask in the sun most of the day.

With the exception of some areas in the panhandle, where two separate Gulf Coast softshell species live, most residents and visitors will see the very common Florida Softshell turtle, as shown in the picture. 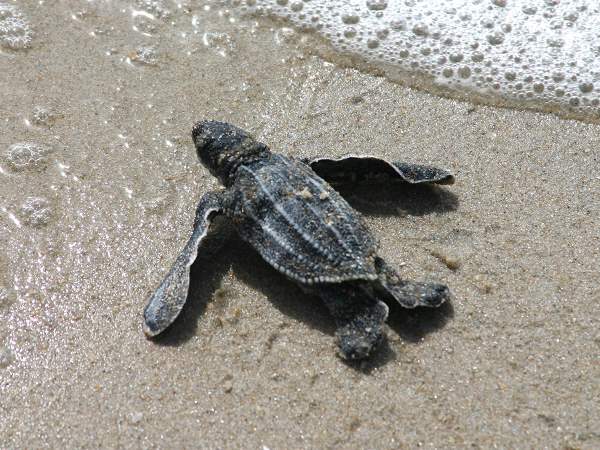 Sea turtles have always loved Florida beaches. Five of the worlds seven sea turtle species nest there: All of them are listed under the Endangered Species Act. Hawksbill and Kemp’s Ridley sea turtles are the least common nesting species.

Leatherback Sea Turtles are probably the most important species in terms of population stress, although the Atlantic population is more healthy than the Pacific population. In Florida they usually nest from March through July.

Leatherbacks are a marvel in and of themselves. The rank as the world’s largest marine turtles, easily reach lengths of over six feet long. They swim the world’s oceans at great depths.

The name leatherback aptly describes its most important physical characteristic. It is the only soft shell sea turtle, and it is also considered warm blooded, with the ability to regulate its body temperature during forays into colder ocean water.

Florida populations nest primarily on the Atlantic coast beaches in the south. They face two distinct problems. The first is climate change. According to the International Union for the Conservation of Nature (IUCN)

The second is diet. It might be difficult to believe that Leatherbacks can grow so big on a diet solely consisting of jellyfish. But it’s a true story. Jellyfish are slow moving and easy to catch, so when they are found in large swarms, the Leatherback turtle can eat all day.

At issue is the fact that huge amounts of plastics have also been dumped into the oceans. Plastic bags filled with water somewhat resemble jellyfish under water. When leatherbacks consume them it causes physical harm. 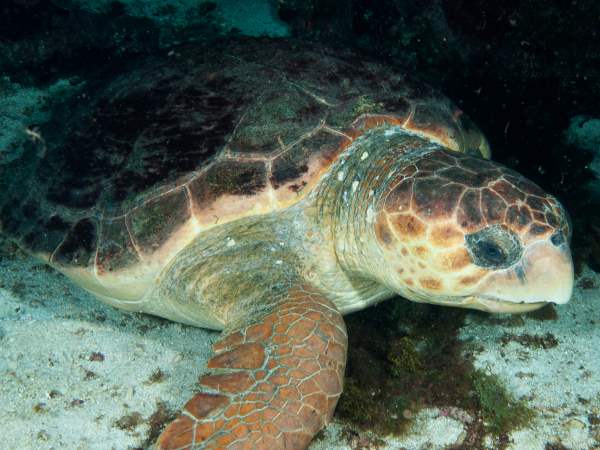 The name loggerhead comes from the shape of the turtle’s head. The IUCN monitors ten distinct populations of loggerheads around the world. Florida’s falls into the Southwest Atlantic region, and they indicate that the population has held steady during the past three generations.

According to the Florida Fish and Wildlife Conservation Commission

Annual total nest counts for loggerhead sea turtles on Florida’s index beaches fluctuate widely and scientists do not yet understand fully what drives these changes. A detailed analysis of Florida’s long-term loggerhead nesting data (1989-2018) revealed three distinct phases… Following a 52 percent increase between 1989 and 1998, nest counts declined sharply (53 percent) over nearly a decade (1998-2007). However, annual nest counts showed a strong increase (66 percent) since then (2007-2018). Overall, there was an increase in nesting from 1989 to 2018 of 19%.

The nesting season lasts from May through October. During June and July the Sea Turtle Conservancy organizes guided turtle walks for tourists. 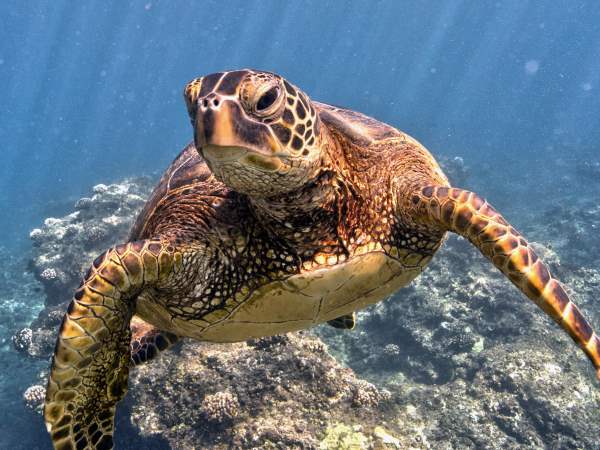 Green turtles nest along most of Florida’s beaches, although a large percentage can be found in the southeast. Nesting season ranges from June through September.

They were once abundant along the coasts. The name Green refers to the color of their body fat, and they were the prime turtle choice for human consumption.

Recently areas of the Florida population have been down listed from endangered to threatened due to increased protection along the beaches during nesting.