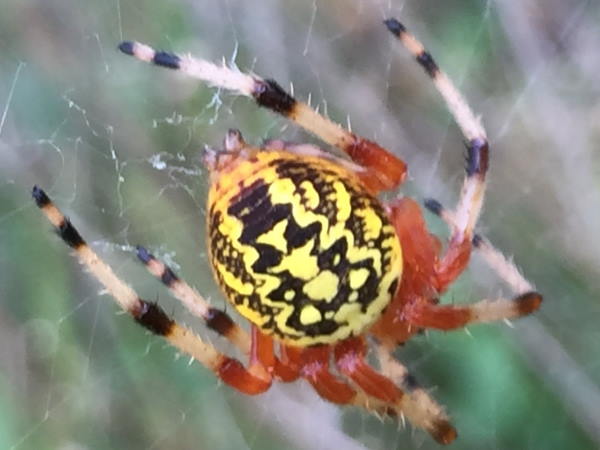 Two types of spiders follow the two spider seasons in the state. Outdoor spiders, including the most common lawn and garden spiders begin showing up after the final frost of the winter and begin leaving after the first frost of fall. Common house spiders live year round in residential building and other buildings around the state.

This brief review of Delaware spiders is supplanted by pictures and identification tips for many additional spider species. They can be found by pressing the green Spiders button.

Most concerns about Delaware spiders deal with the indoor/outdoor cobweb spiders. A couple of year round cobweb spiders live in most, if not all homes, across the state. Apart from creating extra housework removing the cobwebs, they are no cause for concern.

Delaware’s Black Widow spider, the only poisonous spider in the cobweb family, typically lives outdoors. It’s rare to find one in the back yard. However, better safe than sorry means keeping an eye out for cobwebs close to the ground around stationary objects such as barbeques and chairs. They might also be found on corners of back yard sheds.

Fortunately, the possibility of meeting up with a brown recluse spider in Delaware is small. First of all, the name recluse suggests they really, really, really do not like being around people. Second and equally important is the following message from the University of Delaware extension service.

Brown Recluse are not known to be east of Tennessee/ Kentucky. However, at least 2 specimens have been recorded from Delaware.

Orbweaving spiders, those that spin flat, round webs, are some of the most recognized of the lawn and garden spiders that characterize the outdoor spiders.

The top picture, for example, shows the Marbled Orbweaver in a shade of yellow. Their body color usually ranges from yellow to orange, tan or cream. It can show up in the yard (and of course local parks) anytime from May through September. 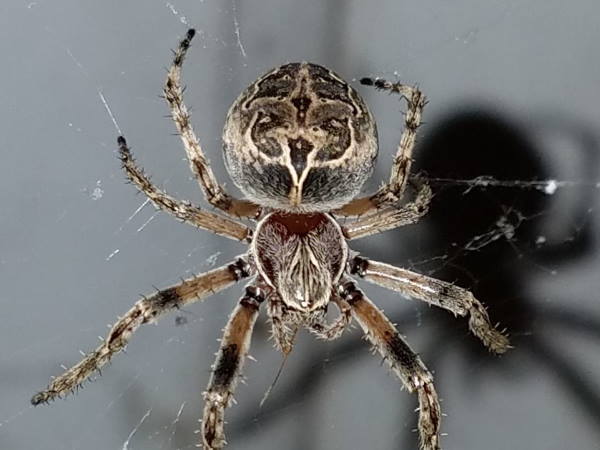 Staying on the topic of orbweavers, with a name like bridge spider, it’s easy to figure out how to find Larinioides sclopetarius. It’s also called the Gray Cross Spider and the picture highlights the spider’s dark body. This group of orbweaving spiders usually are not the common lawn and garden spiders.

All three of the native Larinioides over winter, making them some of the earlier arriving orb weavers of the season. Look for them in Delaware as early as March. They grow slightly smaller that other common orb weavers found around the yard. 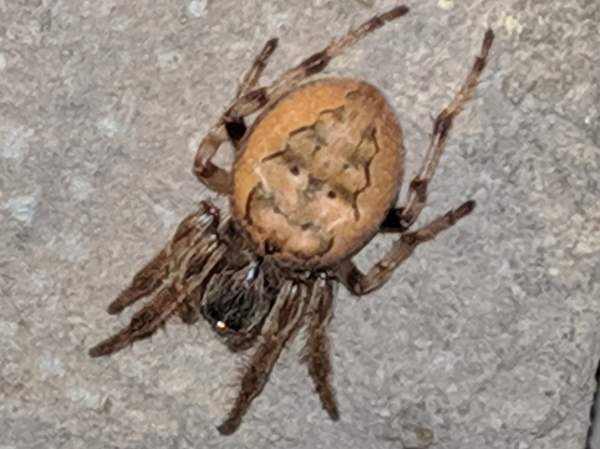 This picture of the Furrow Orbweaver highlights what looks to be a shiny body. The body pattern changes, but the darker edges are a good identification clue.

It can be confused with Larinioides patagiatus, often identified by a lack of a shiny body because the body pattern can change. 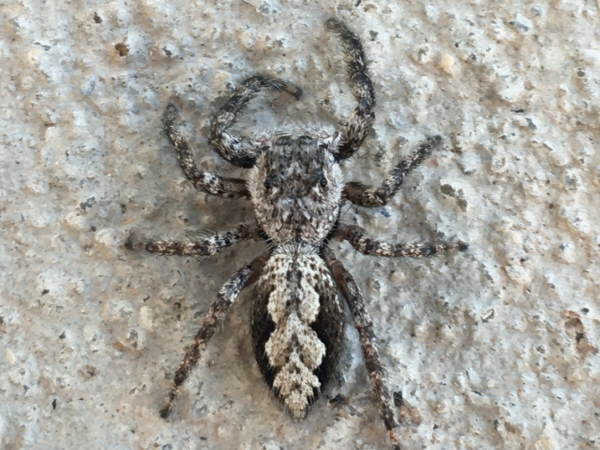 Delaware also hosts a diverse group of jumping spiders. The green jaws of the Phidippus species make them fairly easy to identify at the genus level. The picture shows a Tan Jumper (Platycryptus undatus). The following lists of native Delaware jumping spiders shows the species that have been posted on Bugguide. 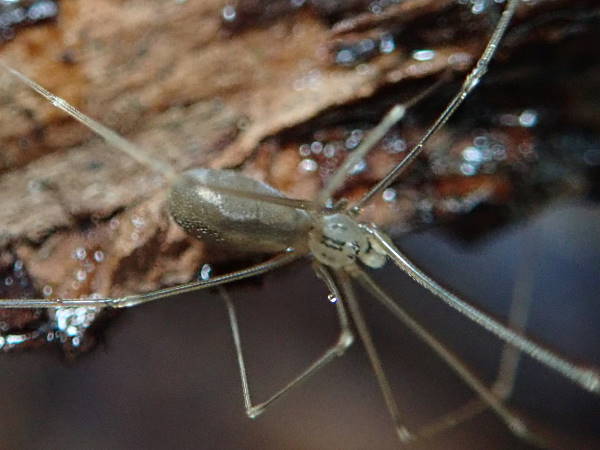 Cellar spiders, among others, represent the other type of Delaware spiders. They are year round residents of homes and building across the state. 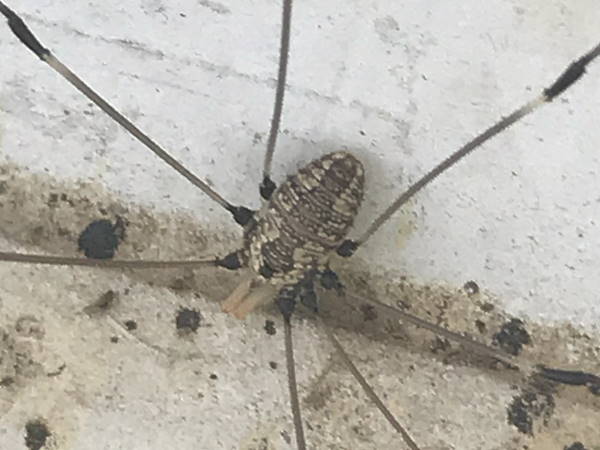 Both Cellar spiders and Harvestman have eight long legs, prompting both to be called Daddy Long-legs. A closer look at the body of the Eastern Harvestman, another common arachnid around the house and yard in Delaware, shows a single body part.

For additional information and pictures covering a variety of year round common house spiders, please press the green Spiders button. 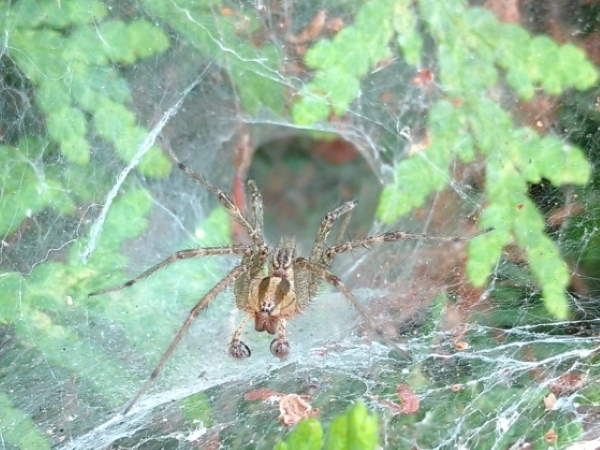 Less well known is the fact that one of the most common house spiders, the Barn Funnel Weaver (Tegenaria domestica) also belongs in the family. Usually the build heir webs in basement corners and they live and raise young all year long if left unattended.

The grass spiders do wander indoors. However, their presence in the house is primarily seasonal, with wandering males often looking for mates during the summer and fall. 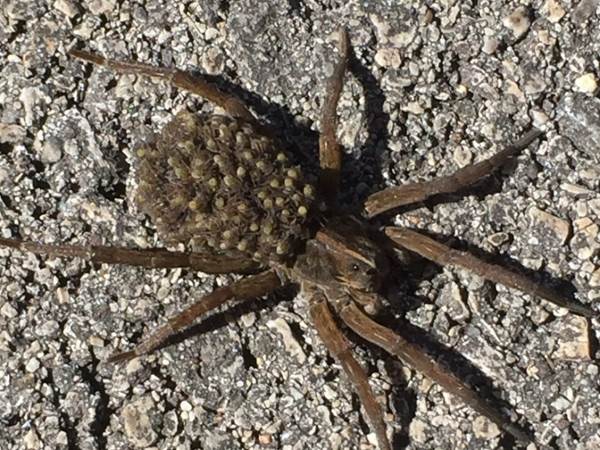 Nondescript thin, brown and gray bodies makes for easy confusion between the funnel weaving spiders and wolf spiders in the yard. 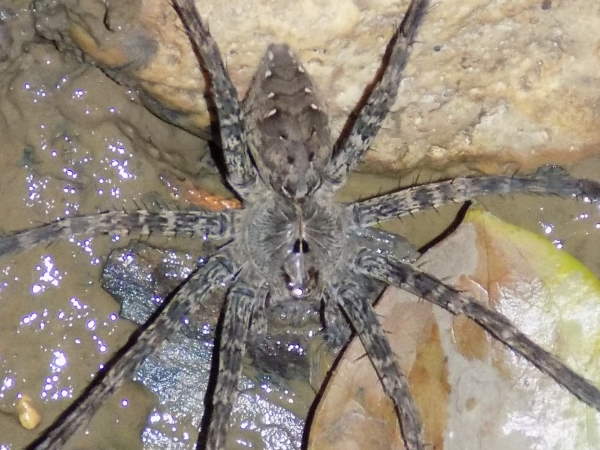 Above average size and dull colors means that many fishing spiders can sometimes be mistaken for wolf spiders.

Sriptus, as the name suggests, shows a more pronounced white script marks down the abdomen. With that starting point, the white dashes on the abdomen of the spider in the picture probably suggest Dolomedes vittatus.

The name fishing spider suggests they are often found around water bodies, and not very common around residential areas away from water bodies. 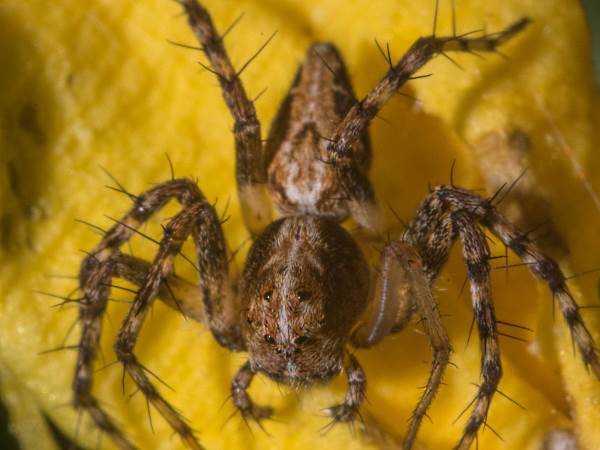 Back yards across the state also host two lynx spiders, the Western Lynx and Striped Lynx. The picture shows a Western Lynx spider on a flower.