The types of bees in the garden helping with pollination chores, a popular topic of conversation among gardeners, usually starts and ends with the family Apidae.

Potentially the conversation can last for days because North American hosts approximately one thousand different species, including its most familiar members, honey bees and bumblebees, along with less familiar names such as Cuckoo Bees, Carpenter Bees and Digger Bees. The video at the top of the page shows a group of bumblebees on thistle (joined by a leaf cutter bee). Thistle may be a weed. However, in the wild, it’s a magnet for many bees collecting pollen. 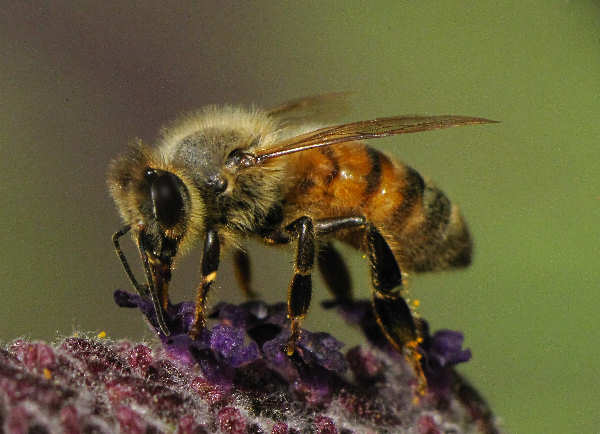 The story of flower bees extends far beyond the basic honeybee. Approximately four thousand bees inhabit North America, and many households who practice bee friendly gardening get treated with their presence and pollination help.

White, yellow and blue or UV flowers often attract bees. Additionally the shape of the flower counts. Flat top flowers that allow bees to land and walk, and tubular flowers often do the trick. Some plants do double work. For example, milkweed gets its reputation as the larval food for the monarch butterfly.

Having many types of bees in the garden and neighborhood also helps maintain a health local ecosystem.

Going back to the Apidae bees, it needs to be noted that they rank as star pollinators of backyard gardens and large scale agricultural enterprises. Because they tend to be general pollinators, honeybees hold a special place in the commercial agricultural sector.

Recent research entitled, Pollination of tomatoes by the stingless bee Melipona quadrifasciata and the honey bee Apis mellifera (Hymenoptera, Apidae) (Genetics and Molecular Research 8 (2): 751-757 (2009) decided to compare the pollination abilities of the two bees in a controlled experiment and concluded,

The largest number of fruits (1414 tomatoes) and the heaviest and largest tomatoes, and the ones with the most seeds were collected from the greenhouse with the stingless bees…. The stingless bee, M. quadrifasciata, was significantly more efficient than honey bees in pollinating greenhouse tomatoes.

Many kinds of bees tend to be either specialist pollinators or general pollinators. Squash bees, for example, are always a welcome visitors to gardens that plant any member of the cucurbit family. Specialist native bees not only help in the garden, they also help by contributing to native flora diversity. 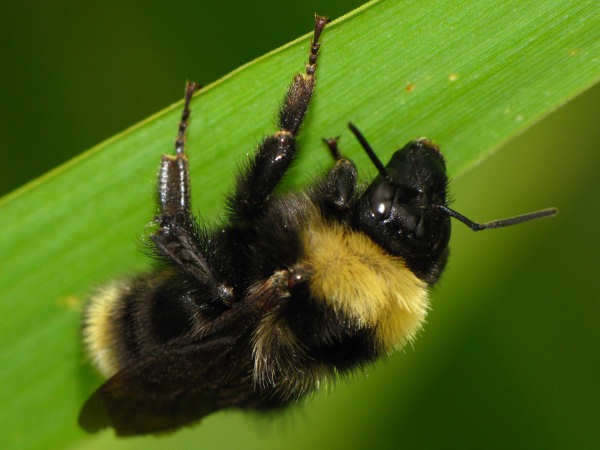 Like honeybees, native bumblebee (genus Bombus) populations continue to experience population stress, to one degree or another. Franklin’s Bumblebee (Bombus franklini), a native species of Southern Oregon and Northern California, for example, is listed as critically endangered on the IUCN Red List. Population declines of other native species are also being recorded around the world.

Researchers hypothesize that the introduction of non-native species into the commercial market solely for pollination, also introduced the diseases associated with the commercial bumblebees.

Currently experts count some 46 different types of bumblebee species present in North America. The picture shows a California Bumblebee. To learn more about identifying bumblebees, press the button at the top of the page. 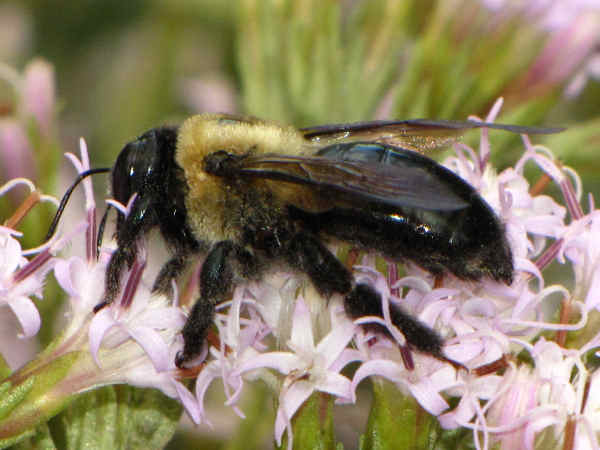 The Eastern Carpenter Bee (Xylocopa virginica) looks like an over sized version of a bumblebee without a hairy abdomen. Its range extends through most of the eastern half of the United States. Like bumblebees, they are social insects that spend their day pollinating flowers.

As the name suggests they build their nest in wood, which occasionally causes problems in residential areas. A circular hole on the surface of untreated wood, along with a trail of sawdust, are typical indications of carpenter bee activity.

The best way to deal with carpenter bee problems in the home is to discourage them by insuring exterior wood areas such as siding and fences, are either painted or treated with a wood preservative. 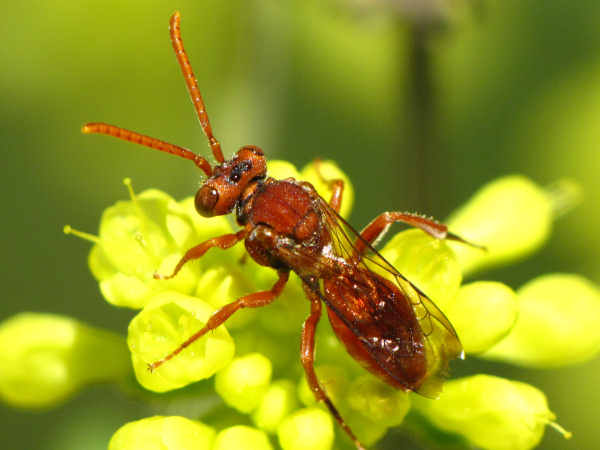 Hairless and small in size, Cuckoo Bees family resemble wasps more than they resemble bees, making them among the least known of the family.

The common name cuckoo refers to the bee’s practice of brood parasitism, like it’s namesake in the bird world, the Cuckoo bird. Adults lay their eggs in ground nests of other bee species, and then let the young fend for themselves. 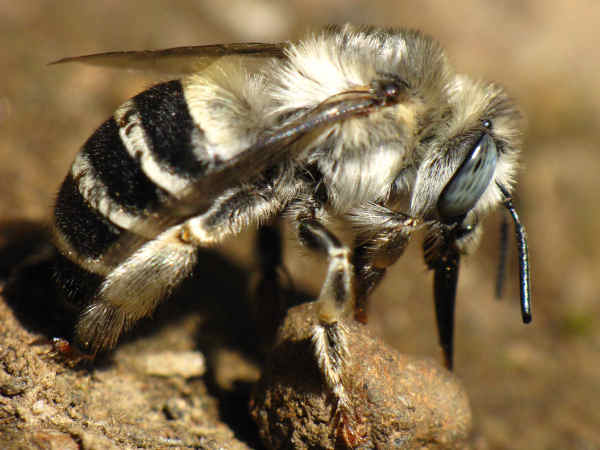 Their practice of building nests in soil explains the common name. The picture shows a blue-eyed Digger Bee.

Generally speaking, digger bees are not known to be aggressive bees, thereby reducing the need to remove any nesting sites that may appear in the backyard or near the garden. 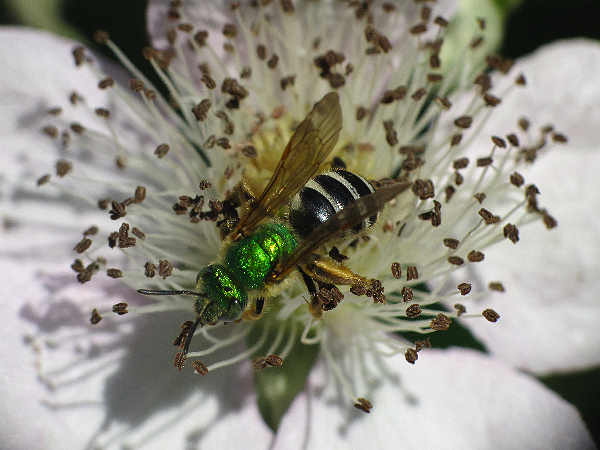 Moving away from the Apidae family, there’s still many types of bees that help around the garden.

Their large population continues to teach scientists much of what they know about social bees. In fact, depending on circumstances, some are social nesters, and others are solitary ground-nesters. Even the ground-nesters show some nesting diversity. For example, what may at first look like a community of nesting sweat bees turns out to be a group of individual bees that share a common nest entrance and then they go on to construct their ow individual nests.

The Metallic Green Bees in the genus Agapostemon rank among the most colorful flower visitors with their iridescent green thorax and striped abdomens. 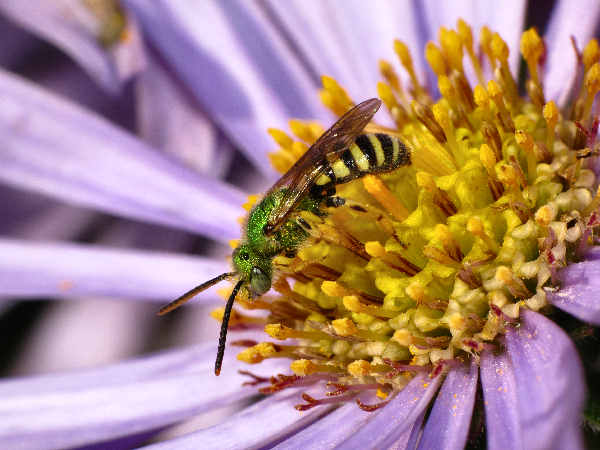 As the first two pictures show, abdomens with either yellow and black or white on black stripes are common looks for many of Agapostemn species. 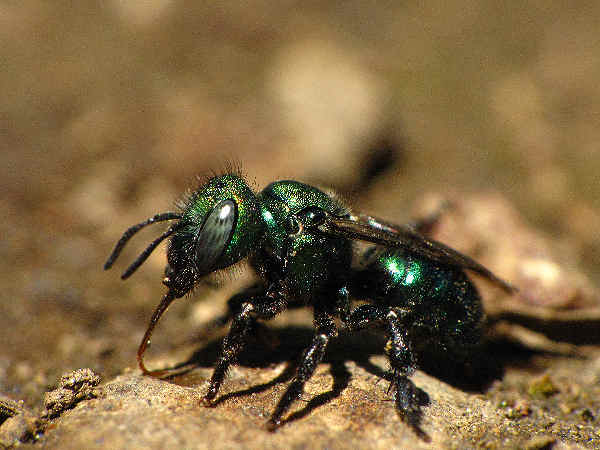 Here’s a small, all green sweat bee taking a break from the flowers and consuming some soil nutrients. 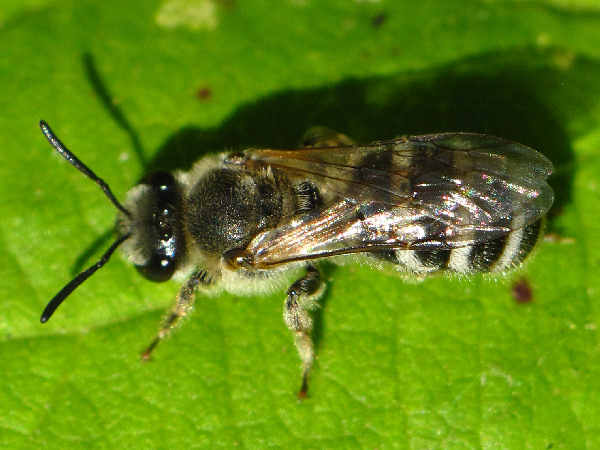 Sweat bee identification becomes a bit more complex with the species that have more bland thoracic colors. Using the striped abdomen as a general identification rule of thumb provides a first guesstimate that the bee in question is one of many sweat bee species. 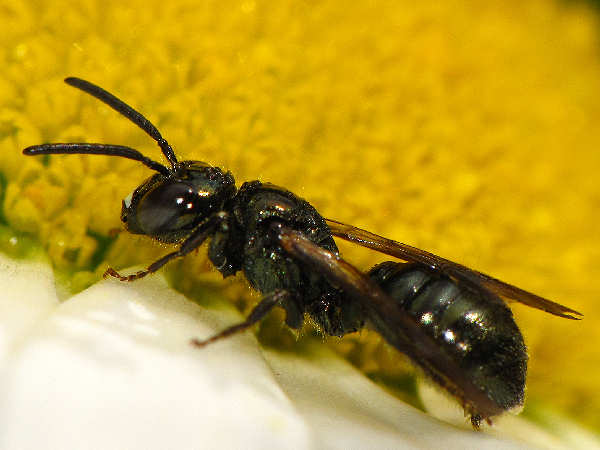 The obvious identification question that comes up in any flower bee discussion deals with differentiating between them and flower wasps. Generally the basic rule of thumb that bees are hairy and wasps not hairy. The picture of the small carpenter bee (certina) shows that the rule of thumb does not always apply.

Small carpenter bees can be found from coast to coast. Fortunately, unlike their larger relatives, they do not pose a problem to residential structures. They build their nests in branches and twigs. 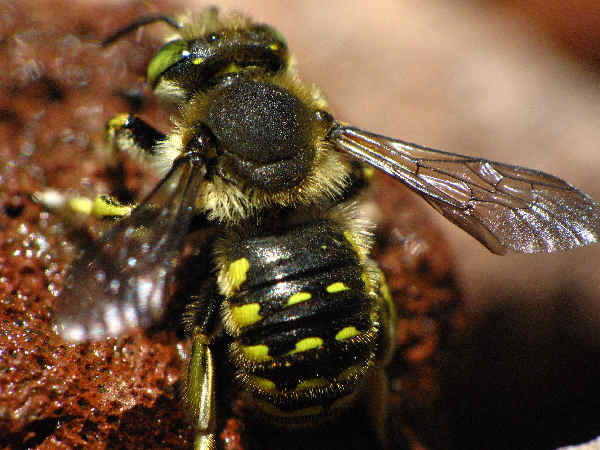 An entire family of Mason bees visit flowers on a regular basis. The story of the Wool Carder Bee introduced some additional excitement to an otherwise familiar story. They are a non-native species, recently introduced from Europe, and they have subsequently extended their range from coast to coast. The name refers to the habit of grabbing hairs from plants in order to cushion their nests.

Wool Carder Bees are very territorial. If you take a few moments to watch them, their aggressiveness becomes very apparent. They tend to instantly attack any bee, wasp or fly that comes their way. Fortunately they are not aggressive toward humans and watching the drama play out in the garden can be an interesting exercise. 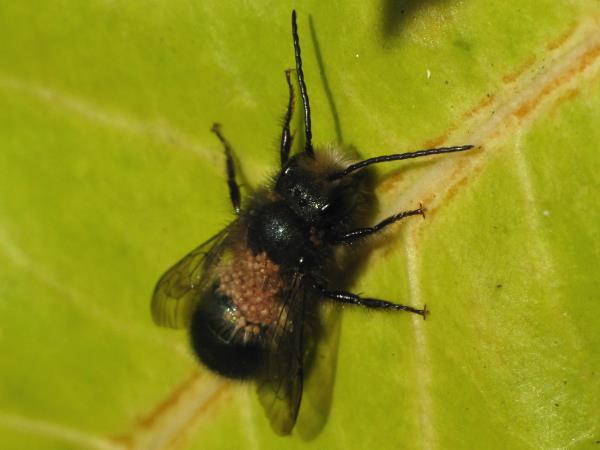 The picture shows a specimen with mites. 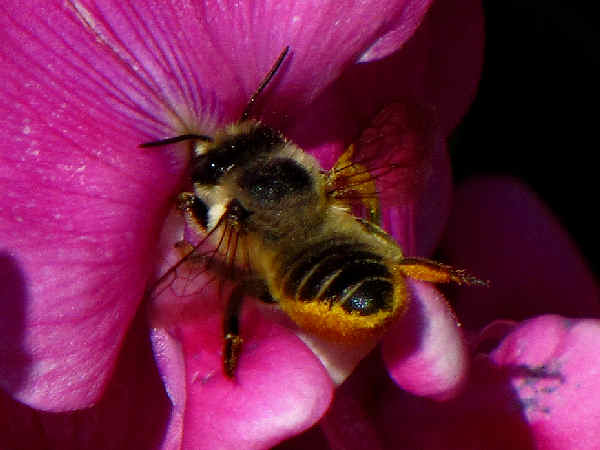 The bee family called Leaf-cutter Bees (Megachile) can sometimes be easily identified by they yellow pollen all over their underside. They lead an interesting life. Their nests are built in the ground and lined with leaves, hence the name. Fortunately they seldom sting.