We know them as beach birds. The ubiquitous human beach companions known as seagulls, or just plain gulls, fill a large space within the larger family, Laridae. 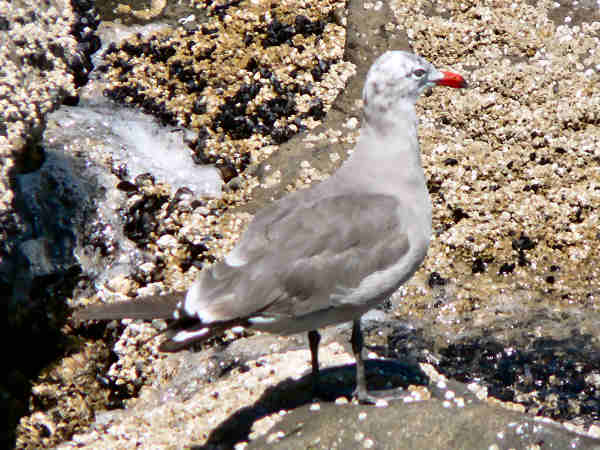 Adult identification of gulls can be straightforward. Most identification problems stem from the fact that juvenile gulls go through a series of molts prior to gaining what constitutes standard feathers for the particular adult species.

The solid colored, dark head feathers of the Laughing Gull (Leucophaeus atricilla) in summer plumage, often described as a hood, makes is difficult to mistake for any of the North American Larus species.

The top video shows the Laughing Gull in winter plumage, with a prominent white eye ring and dark legs and a minimal dark patch of feathers on an otherwise white head.

Laughing Gulls inhabit coastal areas along new world neotropical coastlines in both North and South America. The North American population spreads its feathers along southern coastal areas. Like other gull species, they are colony nesters that extend their range along the Northeast Atlantic Coast during summer breeding season.

The red bill of the Heermann’s Gull (Larus heermanni) makes for a great coastal gull sighting. It’s strictly a West Coast Gull, found along the edges of rocky beaches from British Columbia to Mexico. 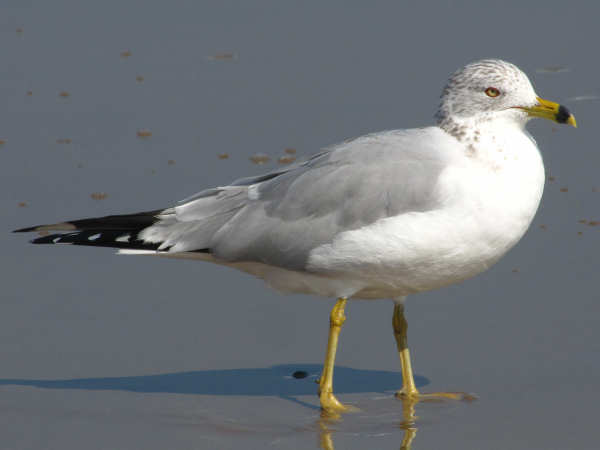 Yellow legs and a black ring around a yellow bill distinguish the Ring-billed Gull (Larus delawarensis) from other Larus species. It’s one of the more common North American gulls, wintering in the south from coast to coast. During breeding season, large flocks migrate as far north as southern Canada. The latin name delawarensis stands for the place the species was first recorded, the Delaware River.

Ring-billed gulls serve to remind us that sometimes the term sea gull is a misplaced description of the genus. Many individuals spend the majority of their summer and winter lives far away from salt water habitats. 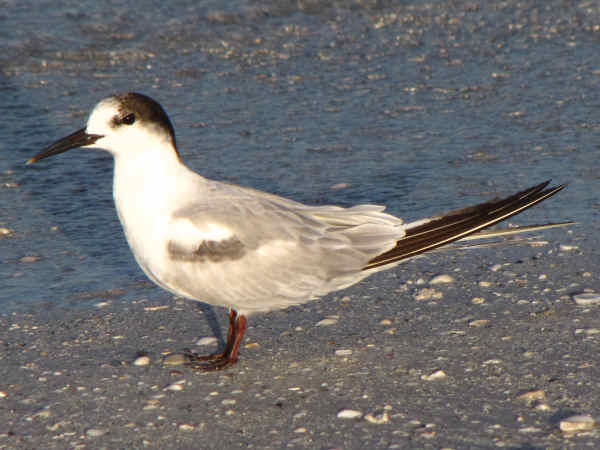 With a global breeding range that extends from the Arctic, south into northern climates of North American, Asia and Europe, the Common Tern might be one of the world’s most common terns. They are social breeders, that fortunately, can adapt their breeding strategy to fit a variety of inland and coastal habitats. Drastic population declines in the nineteenth century, due to the popularity of the feathers as fashion accessories, were reversed party because of protections afforded to them, partly to their adaptable breeding behavior.

Within their range, Common Terns can be confused with a handful of other tern species. In the United States it can be confused with the Forster’s tern, however, the adult’s black cap, red legs and red bill with a dark tip are usually sufficient field identification clues.

Identifying juveniles and adults with winter plumage can be a bit more difficult. Picture two shows a Common Tern with muted red legs and dark bar across the wings. 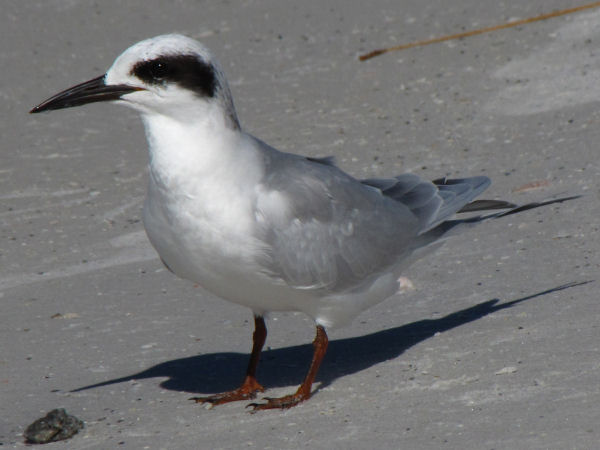 The Forster’s Tern (Sterna forsteri), an almost exclusively North American Sterna species, splits its time between its summer breeding grounds in the Great Lakes and prairie regions and its coastal winter grounds. The black cap, red legs and black-tipped red bill of the breeding adult population makes them very similar in appearance to the Common Tern. The white chest and belly of the Forster’s Tern are the key field identification clues.

The picture shows a Forster’s Tern in winter plumage. The dark comma mark across the face, the muted red legs and white belly serve as good winter plumage identification clues. 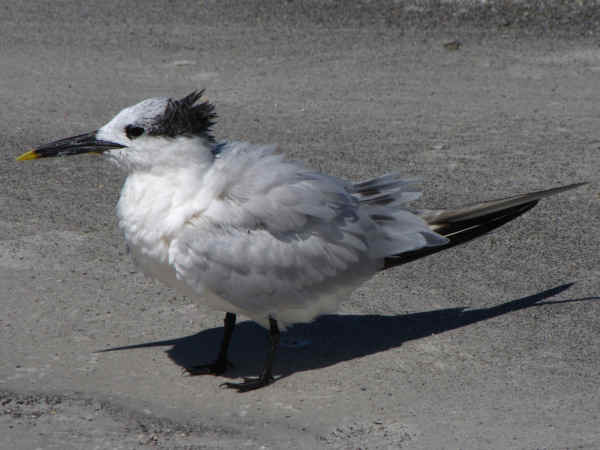 Crested head feathers, along with other genetic similarities serve as the foundation for the recent creation of the genus Thalasseusa, or crested Terns. The yellow-tipped bill serves as the key identification feature for the Sandwich Tern (Thalasseus sandvicensis), a medium sized bird that lives along the coastal areas of the Southeast and Gulf of Mexico.

The picture highlights an individual with spiky or crested head feathers, a physical feature common to a handful of tern species, which based on genetic studies, were recently placed within a separate tern genus, thalasseusa.

Genetic studies of terns continue, and some of the most recent research questions the categorization of the new world and old world Sandwich Tern populations as a single species. The studies suggests the North American species differ from the species that lives and breeds along the European, Mediterranean and African coastal areas. 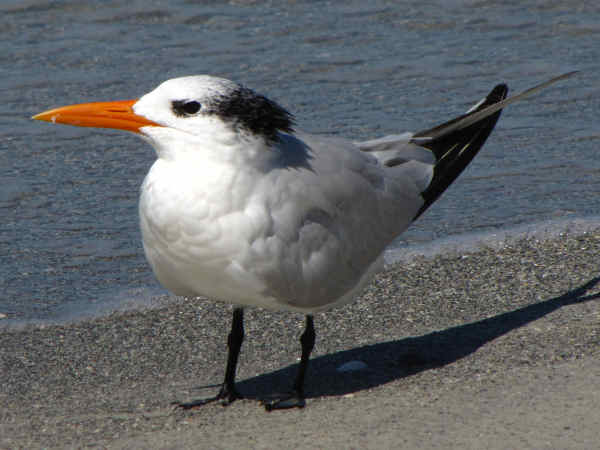 The large size, black legs and orange bill of the Royal Tern (Thalasseus maximus) provide for fairly easy species identification in its East Coast and Gulf Coast habitat. A small Southern California coastal population also exists, and some identification confusion arises in those areas where its range overlaps with the smaller, and similar looking Elegant Tern.

Royal Terns breed along coastal areas, and on the East Coast, a summer breeding population can be found as far north as New England.

In addition to their North American presence, a separate population of Royal Terns also live along the eastern coast of Africa, migrating to coastal areas of Southern Europe during breeding season.