Welcome to the Alabama Butterflies section. Temporarily putting the skipper butterflies into a bracket, Alabama has a very rich butterfly history with about ninety different species that can be found throughout the entire year.

Knowledge of host plant choice is important in determining where to find particular butterfly species, and it is crucial to understanding how to conserve and protect them. The plants included in this list have all been documented as host plants in Alabama.

Butterfly identification usually begins with color. So, the Alabama butterflies section divides into the families that often use color as the key identification feature.

This article provides a quick list of Alabama butterflies and species to get things started.

All the Alabama butterfly pictures can not fit on a one page introduction. So please press the green butterflies button for additional pictures and information.

Alabama butterflies nicely divide when it comes to the family Pieridae. That’s the formal name of the family that consists of the butterflies with white wings and yellow wings. The picture shows a Cabbage White butterfly, a ubiquitous butterfly seen around gardens across the United States. It’s probably the most widely distributed of the Alabama white butterflies. The Great Southern White is the most common white butterfly in the Southern part of the state.

Like many southern states, yellow butterflies abound in Alabama. Cloudless Sulphur, Little Yellows and Sleepy Oranges have a state wide distribution. They also fly most of the year. The picture shows a Little Yellow Butterfly.

Here’s the remainder of the whites and yellows list documented for Alabama.

The common name Gossamer-wing butterflies refers to members of the family Lycaenidae. They split into three groups, the blues, hairstreaks and coppers. Alabama hosts a nice variety of species.

Just as with most southern states, the majority of species are haristreaks. The picture shows an Edward’s Hairstreak, one of the least common species. Almost any day of the year visitors can find a Red-banded Hairstreak.

Here’s a nice list of the Alabama butterflies belonging to the Lycanidae to help with identification. 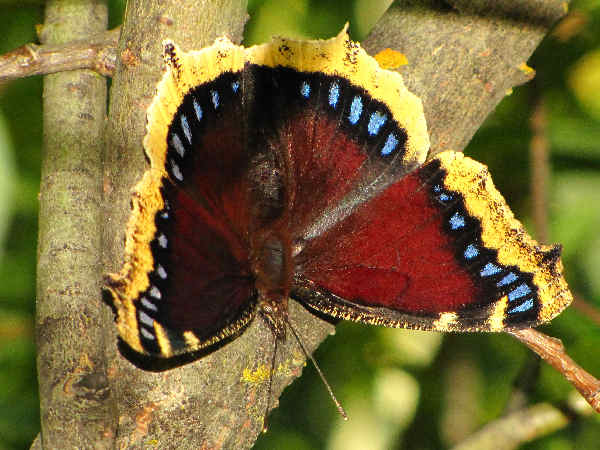 Alabama has an affinity for butterflies. They named the Monarch butterfly their official state insect. It’s one of many dazzling Alabama butterflies in the brushfoot family.

Brushfoot butterflies are fairly hardy and about one dozen species fly almost year round in the state, including the Commas and the Ladies.

The picture shows a Mourning Cloak, another large and showy species Here’s the entire list. They also can be found almost year round.

Alabama’s warmer climate makes it hospitable for eight different swallowtail butterflies. Most of the species can be found in the southern areas from February through November and possibly December.

They do lack the Parnassian species, because they are the more cold hardy of the swallowtail family species. The picture shows a Zebra Swallowtail. The Eastern Tiger Swallowtail is the official state butterfly.

Metalmarks are mostly a southern species, however Alabama only host two. The picture shows a Swamp Metalmark.