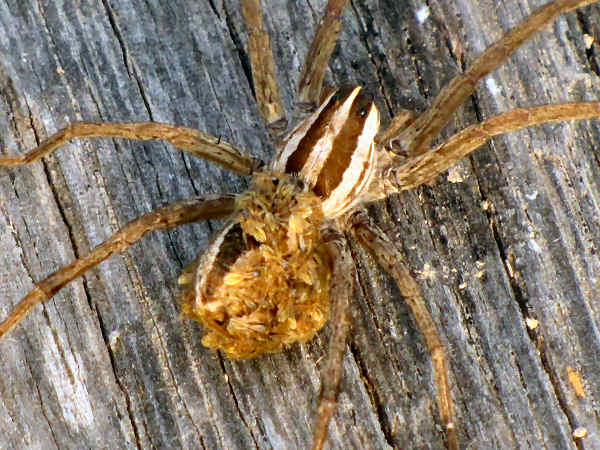 Wolf spiders (family Lycosidae), hunting spiders found in homes and gardens across North America, walk, or more often run, along the ground and among rocks and leaf piles searching out prey.

Over a dozen different genera, consisting of over two hundred species call some part of the United States home, making them one of the most abundant and commonly seen spiders.

Wolf spider identification begins by finding spiders with body patterns similar to the patterns on the spiders presented here. Grass spiders superficially resemble wolf spiders, so if the spider is near a funnel web, the odds are it’s a grass spider.

A few articles published by The National Institute of Health address wolf spider bites, summarizing them as follows,

Like all spiders, wolf spiders bite, but their bite is considered more annoying than dangerous.

Most Raidosa species measure around one inch in length and share the physical characteristic of having distinct light stripes on a brown body. The picture at the top of the page highlights a chevron pattern on the bottom of the abdomen. 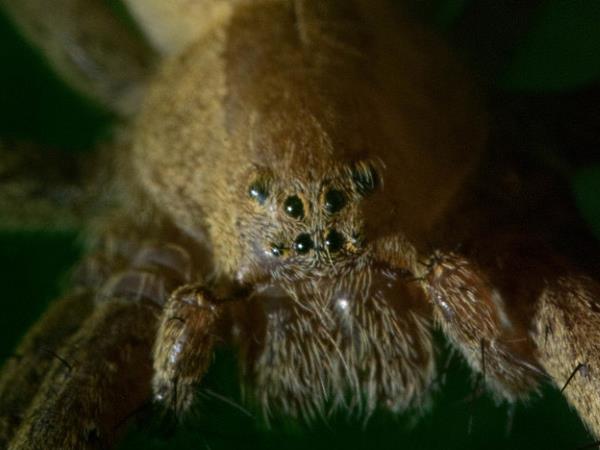 What happens when there are no egg sacs to help with ID? Well, because their bodies often change appearance to blend in with the environment, the number of brown to gray colored spiders makes for very confusing identification.

With few exceptions, it would be easy to confuse a variety of wolf spiders and some of the nursery web spider species. This is especially true in the Eastern United States, where the Nursery Web spiders (including fishing spiders) are most dominant.

Eye pattern represents the first spider identification clue when deciding between families. The picture at the top of the page, for example, shows a spider with two rows of eyes. That’s the basic form for members of the nursery web spider category. 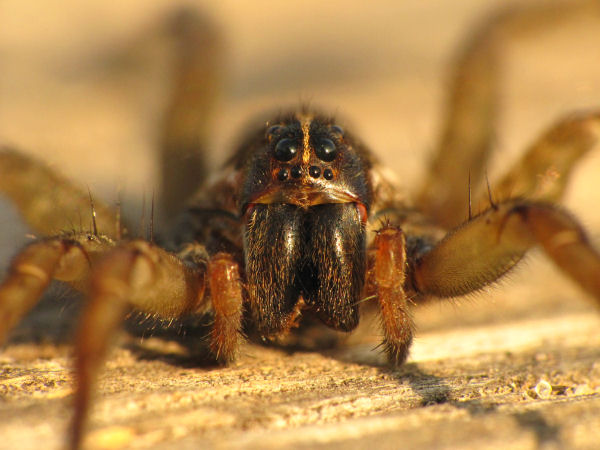 The next picture shows an eye pattern of four eyes on the bottom row and two rows of two eyes each. That’s they typical eye pattern for wolf spiders.

Identifying wolf spiders by body pattern is almost a non-starter because most of the approximately two hundred and forty wolf spider species look very similar. Their looks can also change over time.

For example, the eighty or so thin-legged wolf spiders, the most common group of wolf spiders, . One might think that the presence of thin legs would be a good field identification clue.

That’s partially correct. Nonetheless, thin legs are a physical trait of wolf spiders in the genus Acantholycosa. The difference between the two groups is the number of tibial spines, or hair like protrusions from the tibia on the first leg.

So, guessing thin legged wolf spider for any particular specimen will only get you so far. Accurate identification of thin legged spiders requires the use of a macro lens to get a picture that shows the spines on the tibia. 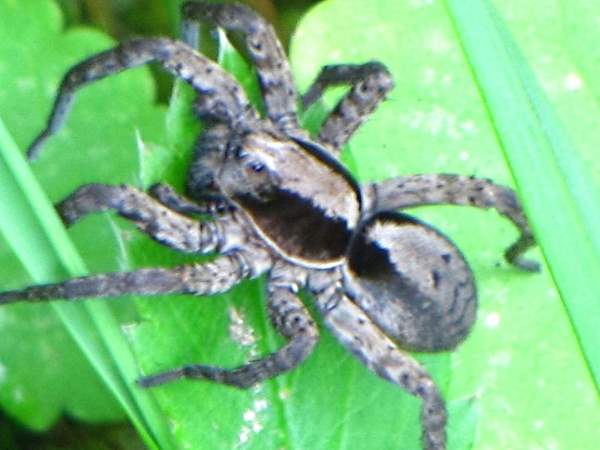 Size might help with identification of some wolf spiders. Species in the Hogna and Tigrosa genera, expecially the females, have bodies between three-quarters of an inch and one and one-half inches.

The Carolina Wolf Spider (Hogna carolinensis) ranks as the largest of the Hogna species.

It inhabits a variety of primarily southern ecosystems, and home consists of a ground burrow. Their hunting occurs mostly at night.

Females often overwinter in residential areas, startling unsuspecting homeowners when they run from under a board or other ground based object. In 1990 the South Carolina designated the Carolina Wolf Spider as the official state spider. 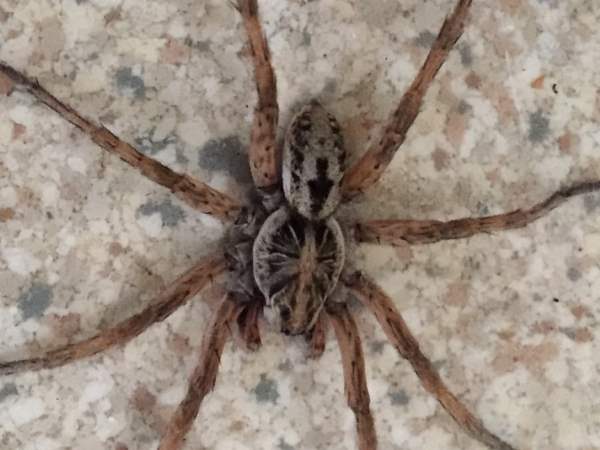 Here’s another Hogna species. It might be H. antelucana. However, without a look at the under side of the abdomen, any identification would be inconclusive.

The following two pictures show similar sized spiders with muted color bodies. The easiest identification is that a brown wolf spider is pictured above. 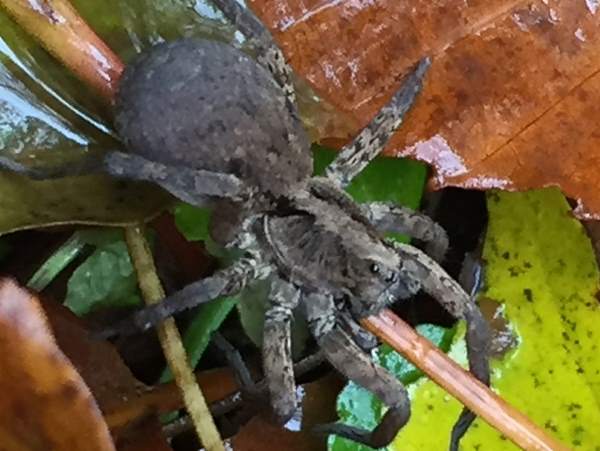 Wolf spider with a gray body. 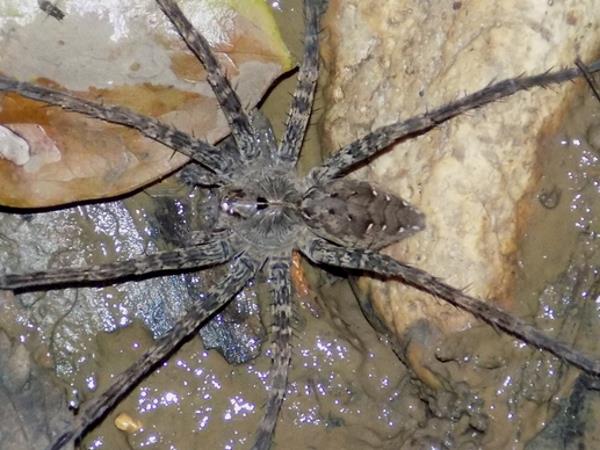 Size does not always help differentiating between wolf spiders and nursery web spiders. Many of the nursery web and fishing spiders, especially the females, have bodies that reach one inch in length. Add in long, thin legs and they are fairly large spiders.

Apart from the Six-spotted Fishing Spider, identifying Dolomedes fishing spiders often turns into an exercise in guessing. Five species are present in the Northeast and New England forest areas. Four of those species have ranges that extend through most of the East and Midwest.

With some slight differences, they look very similar to eachother, and to wolf spiders. For example, think writing when hearing the formal name, Dolomedes scriptus. The spider has a distinct W markings on the abdomen, outlined in white. 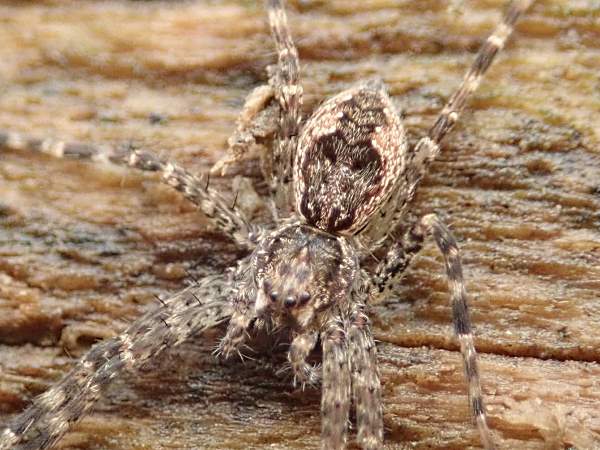 The White-banded Fishing Spider has a white band across the face. 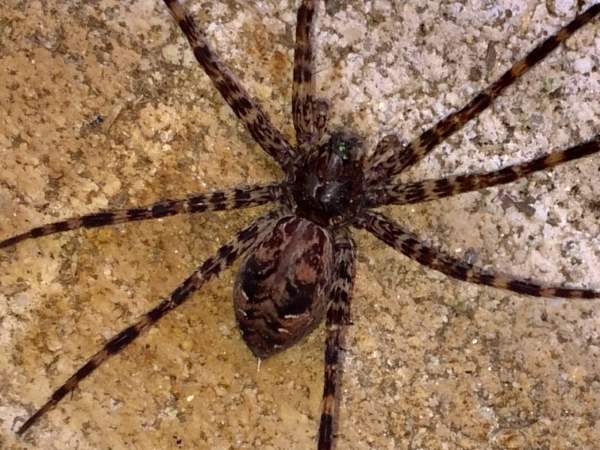 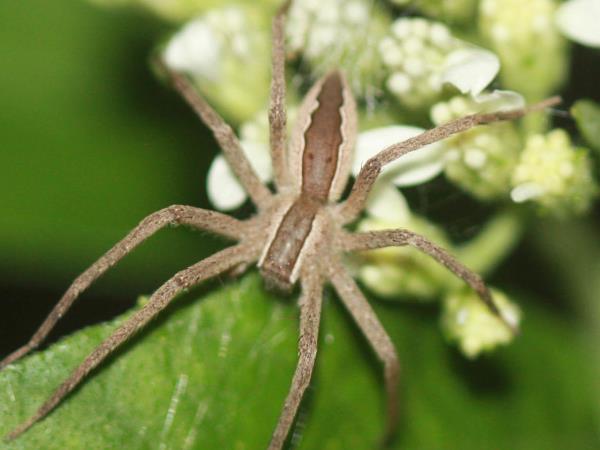 Nursery Web Spider is the dominant species of the east.