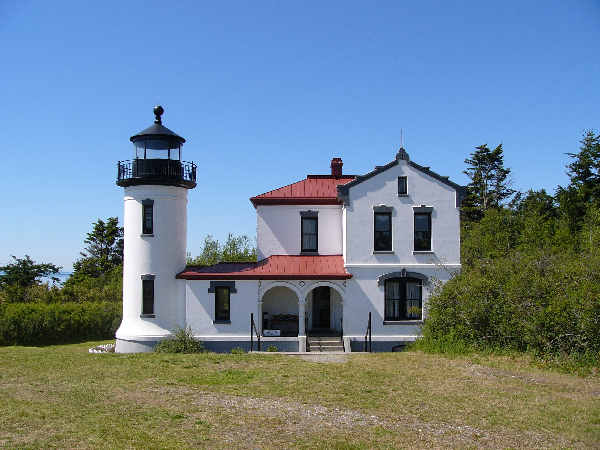 Welcome to the Washington wildlife section. From the coastal shores and mountains to the city streets of Seattle and to the eastern wilderness areas, wildlife abounds in the state.

The picture shows Admiralty Head Lighthouse on Whidbey Island. Washington has two water borders and about twenty seven different working lighthouses. They help tell the story of the state starting from the late nineteenth century.

The Orcas of Puget Sound receive a large part of the Washington wildlife ocean attention, for good reason. They are a distinct subspecies of Killer Whales and in the past twenty five years their population has declined.

Coastal Washington is also well known for its intertidal animals. Kid friendly and consequently adult friendly tide pools exist along most of the coast that provide habitat for very familiar ocean animals that span the alphabet such as barnacles, clams and urchins. 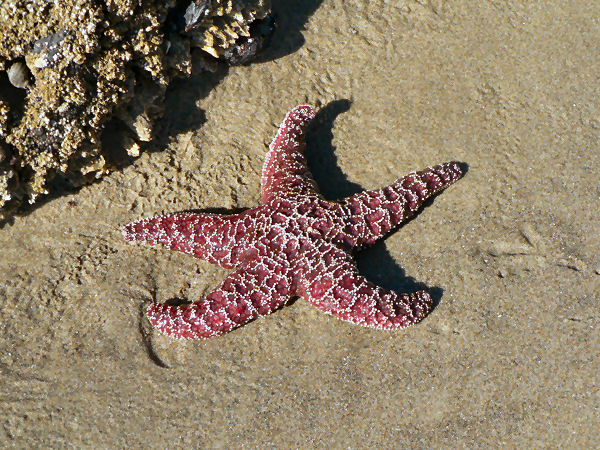 A trip to a Washington beach often involves a starfish encounter. Starfish or Sea Stars, the common name given to an entire class of ocean animals called Asteroidea, or Asteroides for short, inhabit the world’s ocean floors. A walk along the beach at low tides often reveals their presence in the area.

An interesting starfish fact attaches to the name. While it implies five arms, and some starfish such as the purple orchre star, pictured, show five arms, the number of arms does not define the starfish. Rather, true starfish are characterized as having a symmetrical body with arms extending from the center.

In fact, the two thousand or so different starfish species can have anywhere from four to fifty arms. The sunflower star, for example, a common West Coast starfish, has twenty four arms. 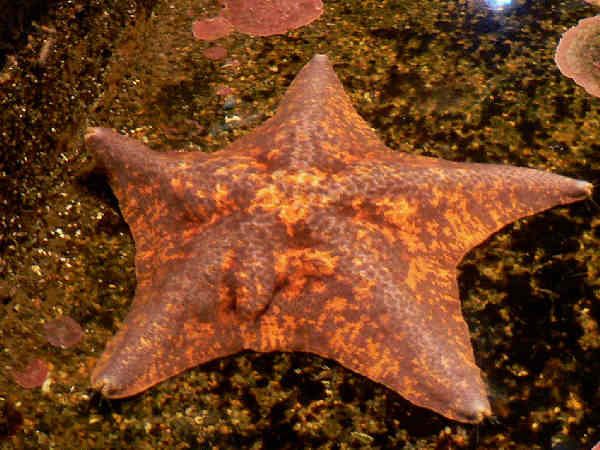 Bat stars present themselves as another variation on the symmetry theme, this time with webbing between the arms.

They live among the rocky and sandy shores along the Pacific coast from Alaska to Southern California, often close to kelp and grassy areas, its food source of choice. 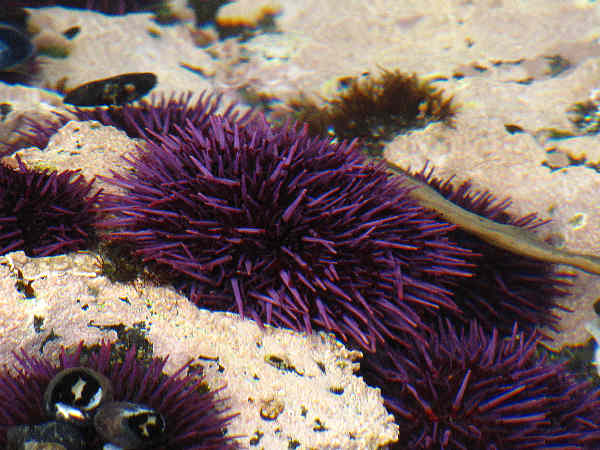 On a clear, sunny coastal day, sea star relatives can also be found close to the shoreline. Purple spines attached to a Purple Sea Urchin can be easy to spot. Most of the time, sea urchins remain stationary, attached to rocks or other hard substrate as they spend their day scraping and consuming algae.

Their range extends beyond the shallow intertidal area, to deeper water, often around kelp beds, one of their favorite meals.

The round Sea Urchin bodies, formally called tests, are covered by a hard shell. Like Sea Stars, their mouth is on the bottom of the body. The spines are used as a defense mechanism, and while some sea urchin species are known to be poisonous to humans, the purple sea urchin is not considered poisonous. 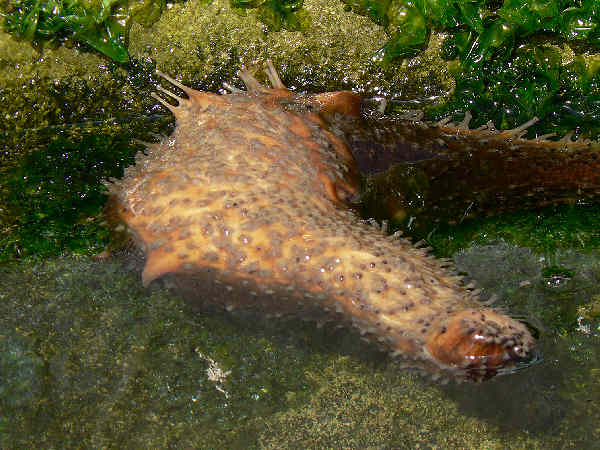 Different Sea Cucumber species can be found in the intertidal zone, while other species spend their lives on deeper ocean floors. While their diets change from habitat to habitat, they are considered benthic feeders (animals that feed on the bottom of the ocean), eating algae and other organic materials in their territory. 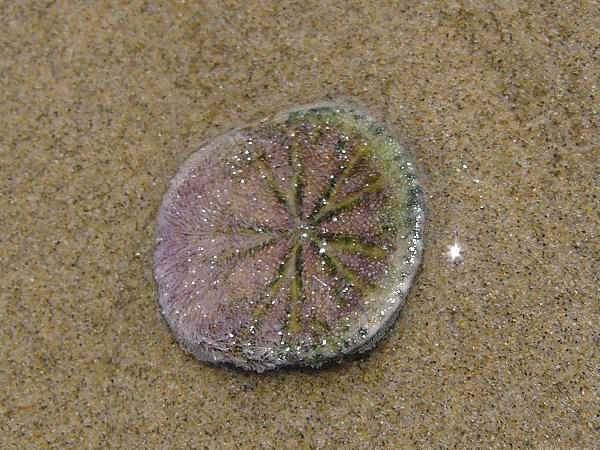 Sand dollars are characterized by a spiny circular shell. As the name suggests, sand dollars live in on the top layer of sand (or just below it) in an area up to one-half mile beyond the lowest of low tide marks. Since they are marine animals, they die if left exposed to sun and air for a period of time.

Their ability to move helps them relocate according to the movement of the tides. They spend their day eating organic material floating on the water or on the top level of sand. 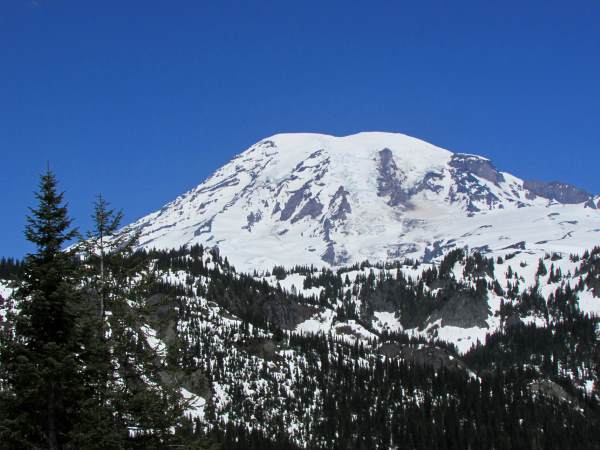 The Cascasdes represent the traditional east west divide for Washington. Mount Rainier reaches an elevation of ‎14,411 feet, making it the tallest mountain in the state.

The land versions of Washington wildlife make their presence shine in these parks. 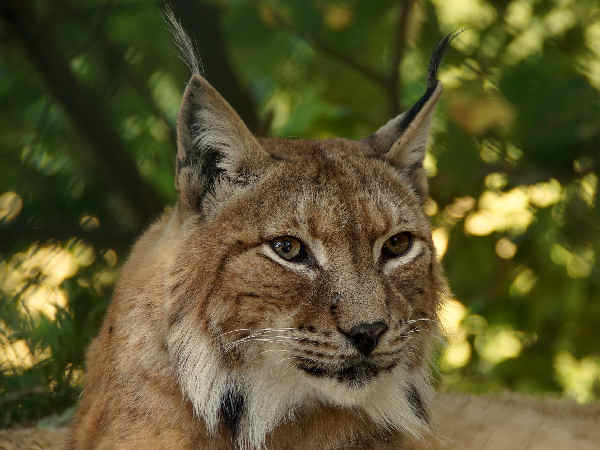 Like many Western states, Washington state hosts some of the country’s larger land mammals. Population growth and development placed stress on their populations. Currently seven different species get listed as state endangered.

Most of the remaining populations of these animals can be seen in park areas. 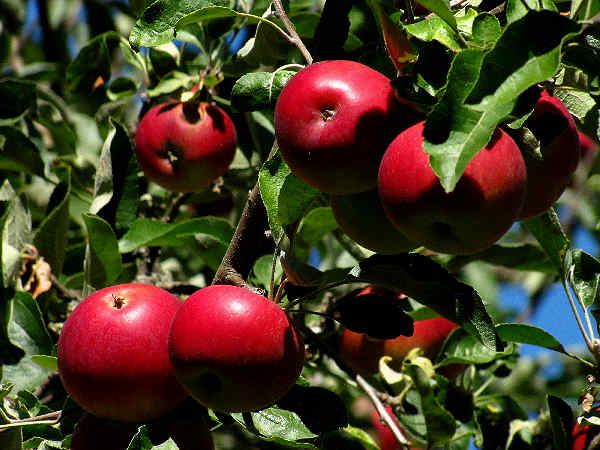 Washington is also known for its fruit. Apples are the number one agriculture product in the state. In fact, they are the largest apple producer in the United States. Each year ten billion more apples are picked and shipped across the United States and the rest of the world.

Washington is also the top producer of sweet cherries in the United States. Dried or fresh, they are an excellent alternative to any candy on the market.

The Columbia Plateau accounts for most of the land East of the Cascades. The rolling hills and pains are perfect for agriculture.

Please press on any button to discover more detailed information on the following Washington wildlife and nature topics.