Tourists looking for something extra to add to their Washington trip might consider a woodpecker excursion. The dozen Washington woodpeckers means there’s always a new species to see for most eastern visitors.

For example, Four sapsucker species (Sphyrapicus) drill their wells in trees from coast to coast. Washington state hosts three of the species and a great place for birders looking for a new woodpecker species to put on their life list.

The Red-breasted Sapsucker (Sphyrapicus ruber) in the video a West Coast variant, spend their summers in higher elevation forests near rivers and streams.

Some populations migrate down to the valleys during winters, and they can be found in Seattle and other areas west of the Cascades.

The Red-naped Sapsucker picks up its range where the Red-breasted Sapsucker range ends, They can be found in the east of the Cascades.

Flickers are another common woodpecker species found in residential areas around Washington state.

Flickers are the ground feeders of the woodpecker family. They prefer open habitats such as fields and residential areas because they supply them with their primary food sources such as insects, seeds and berries. 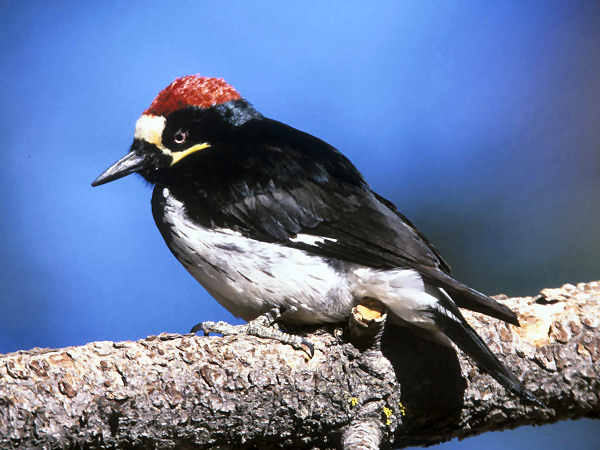 Six Melanerpes woodpecker species nest among North America’s wooded areas. The Acorn woodpecker, perhaps the best known of the western species, inhabits oak groves, where it spends its days gathering acorns. Once gathered, the acorns get stored in tree holes or nearby wooden structure such as fences and telephone poles.

According to Washington Trails

The acorn woodpecker is rare in Washington, found only in oak country or areas where oaks are interspersed with other types of trees. Washington is at the extreme northern edge of the breeding range of this bird, and they are currently found only in Klickitat County.

The picture shows one of its special features. More than any other native species, the purple to red hue on the feathers of the Lewis’s Woodpecker makes it stand out. The greenish head feathers and gray collar and chest compliment the dark wings and tail.

People from the east might be hiking in the Washington woods, look up and see a flitter of a woodpecker and note, “that woodpecker has a head full of white feathers”. Common names mean something. It’s no surprise that the woodpecker they saw was a White-headed Woodpecker. There’s no mistaking it in the wild. It’s a regional specialty bird that inhabits the forest areas of the greater Pacific Northwest.

Black-backed woodpeckers live among the burned out wooded areas of the Northern Boreal forests where they consume the wood-boring beetles that flock to large dead and moribund trees. In these habitat, it’s not difficult to find them flying to and from their nests in the dead or downed trees.

They are cavity nesters, similar to other woodpeciers. As the picture highlights, the yellow crown on the male distinguishes them from the typical red crown of more common woodpecker species. Females have a black crown.

American Three-toed Woodpeckers get ranks as the most hardy breeders of the native woodpecker species. They breed farther north than any other American woodpecker.

The picture of the male Hairy woodpecker highlights the longer bill.