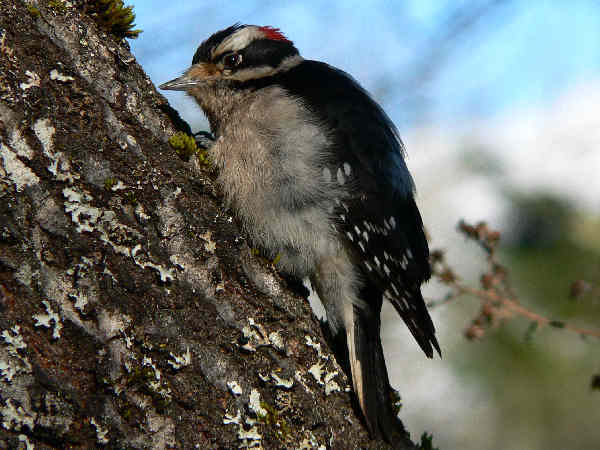 Nine species of woodpeckers belong to the Picoidae genera in the United States and Vermont hosts four of them. It’s probably easy to break down the population into two sets of very similar looking species.

Start with the Downy and Hairy woodpeckers, the two most common Vermont woodpecker species.

With the exception of physical and bill size, the first two pictures show almost lookalike birds. Both have a black and white feather pattern.

Black-backed and Three-toed woodpeckers also look similar. They have mostly black feathers and males have a yellow patch of feathers on the head.

Neither would be categorized as a common feeder bird.

Black-backed woodpeckers live their lives in forests, especially those that suffer some type of damage. They nest in dead or downed trees and consumer insects such as wood-boring beetles that are common in damaged forests.

American Three-toed Woodpecker gets the nod as the most hardy of the native woodpecker species. It breeds farther north than any other American woodpecker. That makes it one of the specially made Vermont woodpeckers.

Yellow-shafted Northern Flickers are a common sight in many of Vermont’s rural and residential areas, so it’s one of the most common of the Vermont woodpeckers.

They are the ground feeders of the woodpecker family. They prefer open habitats such as fields and residential areas because they supply them with their primary food sources such as insects, seeds and berries. The male is distinguished from the female by the black mustache on the cheek.

Red-bellied woodpeckers are the most wide spread Melanerpes species in Vermont. Following regional population trends, the Red-bellied population in Vermont has been increasing for well over a decade.

They are larger than average birds with an outgoing personality. They easily adapt to backyard feeders and their loud vocalizations can often be heard through the neighborhood.

Physically, the name red-bellied can be a bit misleading because the stomach feathers have barely a hint of red to them. The back and top of the male’s head is red. Females lack the red crown but do have a patch of red feathers on the back of the neck.

Red-headed woodpeckers rank as the most wide spread of the Melanerpes species. Unfortunately that does not extend into Vermont where breeding bird surveys show little red-headed presence, with the exception of the Lake Champlain Valley area.

The head, covered in red feathers, along with a white stomach stands out in a crowded woodpecker field. Both males and females share this feature. Juveniles have brown feathers on the head for their first year.