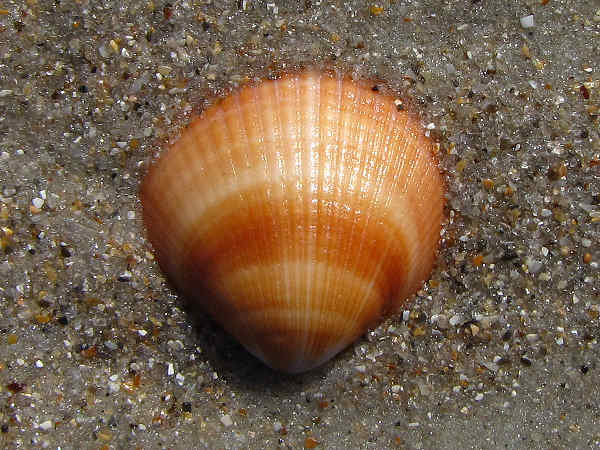 In many coastal areas, a trip to the beach means a trip to a beach lined with the shells of living andimals and the remenant shells of once living animals. Mostly the types of sea shells fall into either one of two common categories, the bivalves like mussles and oysters with two symetrical shells that close together. Sea snails represents the single shelled animals by and large. 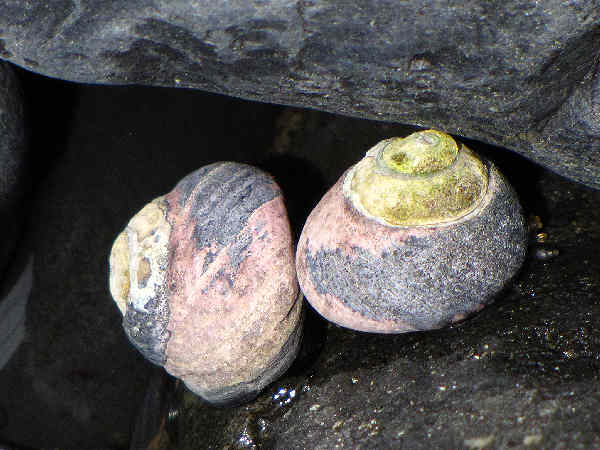 The black shell of the Black Turban snail (Tegula funebralis) makes it an easily identified marine snail in the upper inter-tidal zone. They are medium sized snails, measuring a little over one inch in diameter. They spend their time roaming the rocky coastline, consuming algae. Finding them can be easy. During low tide they gather in large numbers. 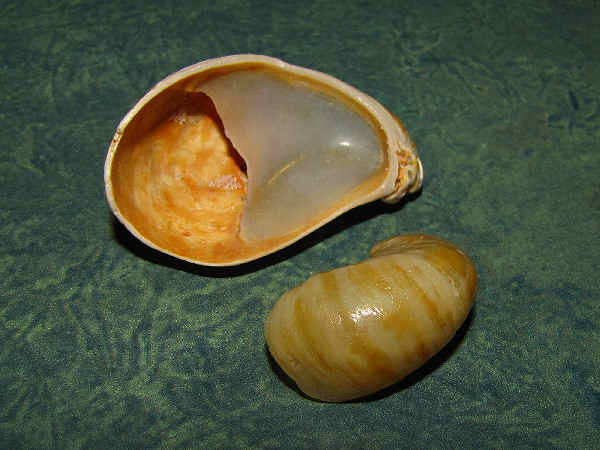 A handful of mollusks go by the name slipper shells. More specifically the term refers to two genera of sea snails, (Crepidula and Crepipatella) in the family Crepidulidae, which is more commonly called the cup and saucers and slipper shells. Crepidula species can be found on both coasts, while Crepipatella are West Coast species.

The picture, an Atlantic Slipper Shell, pretty much explains the name slipper shell. Unlike bivalves, slipper shells are medium sized, one shelled, snails. Rather than having the circular, tightly coiled shell home, they have a more open shell with a ledge built into the bottom to hold the snail.

They tend to behave more like barnacles than snails. As larvae, they attach themselves to an object, including the shells of other nearby animals and other slipper shells, and they spend their lives filter feeding from that spot. Their gender changes over time, with young slipper shells being male and transforming into females as they age. 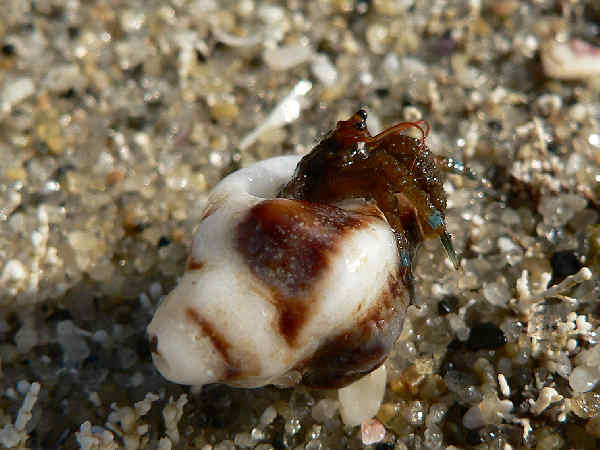 Shells from most sea snail species also make popular hermit crab homes. The story of the Channeled Dogwhelk (Nassa fossatus) explains the competitive environment all the small beach animals face. It’s another common West Coast marine snail, a predatory sea snails in the rock snail family, Muricidae that inhabits both rocky and muddy areas along the inter-tidal zone. They prey on mussels and barnacles by drilling holes in their shells, injecting an enzyme, and then siphoning up the liquid remains. They need to be careful, because their home range also hosts their predators, crabs and starfish.

Chitons and Limpets also prowl the cold water areas of rocky beaches, sometimes without notice, sometimes its difficult to miss them. For example, the shell of the Giant Pacific Chiton measures over a foot in length, making it hard to miss.

Chitons are flexible animals that can secure themselves to rocks as they feed on algae and other plant life. When threatened, they also can roll up into a ball. Chiton shells are often colorful, and with anywhere between 800-1000 chiton species documented, their shells are often considered collectible.

Limpets have a flat or conical shaped shell that protects them as they cling to rocks while grazing on algae and other plant life. A limpet’s shell type commonly serves as a categorizing tool. The Owl Limpet, for example, has a conical, brown mottled shell without any holes on the top. Limpets in this category are commonly called true limpets.

Other limpets such as the Volcano Limpet (Fissurella volcano) have shells with a hole in the top. They belong to a group called keyhole limpets and all their shells have holes on the top that are used for waste disposal.

Most, but not all, limpets prefer a rocky inter-tidal zone habitat. Consequently, more limpet species are found along the West Coast rather than the East Coast of the United States. However, the East Coast is home to a few common species such as the tortoise-shell limpet and, slipper limpet. In some areas of the world, Limpets are considered a culinary delicacy. 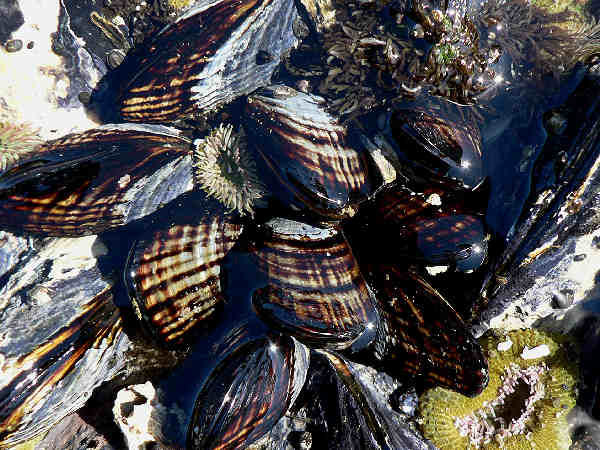 A variety of freshwater and salt water bivalve mollusks go by the name of mussels. Formally the term sea mussels often loosely refers to either all members of the Mytilidae family, or one genera such as Mytilus. However defined, most people recognize them as the edible, pear shaped mollusks that form large colonies along rocky shorelines around the world.

Their edibility makes them a popular research subject, especially because of the fact that they also collect near shore pollutants which can endanger the health of people who consume them.

Mussel Watch, a long term coastal monitoring program, in order to analyze “sediment and bivalve tissue chemistry for a suite of organic contaminants and trace metals”.

A recent twenty year program review shows, scientists have discovered a trend of increased levels of arsenic in Eastern Gulf Coast Oysters, although sample measures fall well short of FDA prescribed danger levels. Of all the regions measured for mercury levels, the Middle Atlantic region shows the only increasing trend, due largely to contamination from Midwest coal generated power plants.

More often than not, mussel harvesting areas get closed down because of outbreaks of harmful algal blooms (HABs) that produce toxic substances ingested by the mussels.