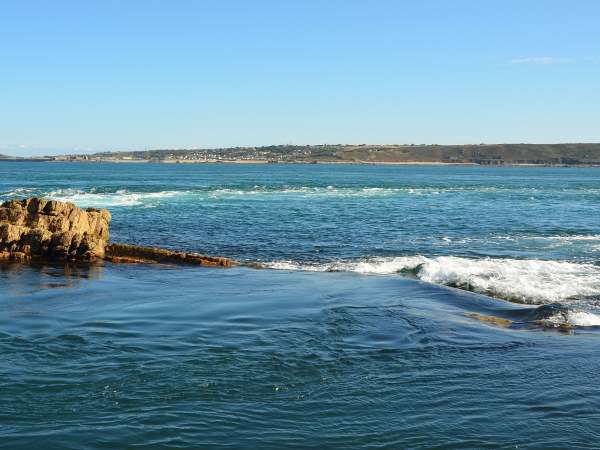 Consider an island situated in a patch of turbulent waters, and it sounds like the perfect place for research and development of those waters for energy purposes. That scenario describes the UK to a tee, and in some ways the current UK R&D tidal energy projects confirms the trend.

A 2013 report by Ernst and Young places the UK at the top of the list in ocean energy generation, with approximately thirty demonstration projects, in production or planning, that is currently producing a total of 6.7 MW of Tidal current derived energy and 4.3 MW of wave energy.

In terms of practical energy needs, the amount of energy generated by these projects is extremely small. Like waves on an ocean, tidal energy and wave power R&D continues to come and go in waves over the past decade, and explanations for its ebbs and flows focusing on a variety of factors, including bureaucratic politics, environmental and technological challenges.

Even the simple task of differentiating between tidal energy and wave energy, and then choosing to focus R&D efforts on one or the other can slow progress. Tidal energy, for example, refers to the onshore or near shore harnessing of changes in the daily tidal flows in order to generate energy, whereas wave energy or ocean energy refers to the offshore harnessing of either the ocean top waves or currents that constantly move through the water column

Bureaucratic politics can be easily assessed as the changing preferences of political actors as they rotate through the levers of government. One party, for example, can voice support for tidal energy and other renewable energy projects, and at the same time, rearrange the budgeting process to privilege nuclear and fissile fuel projects.

The mere fact of ocean energy being situated in an unruly environment, namely a turbulent ocean, no doubt represents the greatest challenge for moving ocean energy to the forefront of large scale energy development projects. Quick reflection points out that it’s much easier to build and manage a group of wind turbines situated on solid land than it is to build and manage any of the handful of contraptions designed to harness the power of the tides.

Technological challenges remain a core problem for moving ocean energy forward, and current research point to the advantages of tidal energy over wave energy based partly on environmental and management considerations. More specifically, the following two reports note that the more stationary, tidal designs using turbines, much like the stationary wind turbines common on wind farms, hold the technology edge.

Harnessing Ocean Energy by Tidal Current Technologies, a 2012 review provides relevant information on the pros and cons of a dozen different types of turbine designs competing in the tidal energy technologies industry. The author concludes,

The ocean energy is gaining popularity as regulators focus on emissions regulations. Tidal current technologies are being explored extensively and horizontal axis turbines are most focused and increasingly popular. UK is leading the way in utilizing ocean energy. The regulators have key role in world’s way forward towards cleaner energy.

The EU also continues to investigate the potential of ocean energy, complementing the work done by individual UK firms. a 2014 report, Wave and Tidal Energy Strategic Technology Agenda also reviews the current state of both tidal and wave technology, concluding that at present, tidal technologies have the edge over wave technologies.

Tidal technologies appear poised to reach commercial breakthrough earlier than wave technologies, and this is highlighted by the number of concepts that have reached sustained full-scale demonstration. Tidal energy concepts present a greater convergence in design, with the majority of developers opting for horizontal axis turbine concepts, thus indicating that the tidal energy sector is at a more mature state of development.

When will large scale tidal energy ever grace the shores of the UK? It’s hard to say. Bureaucratic politics, environmental factors and technology issues continue to influence sector movement. Depending on the confluence of these factors at any given point in time, ocean energy, be it wave energy or tidal energy, could be the wave of the UK’s energy future of tomorrow to the wave of the UK’s energy future next century. 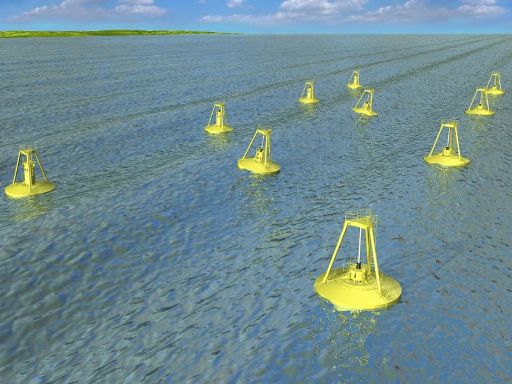 From sun to surf, the United States’ first commercial wave energy farm became a reality when a group of public and private investors working with PNGC Power, a Portland based company, inked plans for the installation of a 1.5 MW wave-power project, to be situated two and one-half miles off the coast of Reedsport, along the central Oregon Coast.

Wave energy farms resemble offshore wind farms, albeit with bouys rather than wind turbines. The technology underpinning the PowerBuoys is relatively simple. One hundred and fifty foot buoys with hydraulic systems are planted in the seafloor. Waves move the hydraulic system, generating electricity. A cable connecting the buoys to onshore transmission lines completes the process.

Offshore construction projects can potentially change the ecosystem of their surrounding environment. Placing large objects on the ocean floor, for example, poses a potential problem for the benthic animal population. Likewise, a large man made structure in the ocean could potentially confuse migrating whales.

The placement of man made objects along the coast could potentially change wave patterns and subsequently shorelines.

Oregon’s wave energy farm only plans for the installation of ten PowerBuoys, creating less of a probability for any significant long term environmental damage. Nonetheless, the wave farm will be monitored for both anticipated and unanticipated environmental problems.

Project supporters also face technical challenges. The PowerBuoys chosen for the project have preformed well in limited testing environments, usually over the course of a year. Because Oregon’s project will be the country’s first commercial wave energy farm, both anticipated and unanticipated longer term buoy maintenance problems must also be monitored.

Wave energy’s potential downside could very well be outmatched by its upside.

According to researcher’s at Oregon State University,

Wave Energy has several advantages over other forms of renewable energy such as wind and solar including higher energy densities, enabling devices to extract more power from a smaller volume at consequent lower costs and reduced visual impact (e.g. the density of water is about 832 times that of air). In addition, waves are more “available”, an indicator of how often the “waves roll” (for wind, how often the “winds blow”). Wave energy availability is in the 80-90% range, whereas wind availability is in the 30-45% range depending on location. Wave energy is also more predictable, with energy forecast times of greater than 10 hours, thus enabling more straightforward and reliable integration into the electric utility grid to provide reliable power.