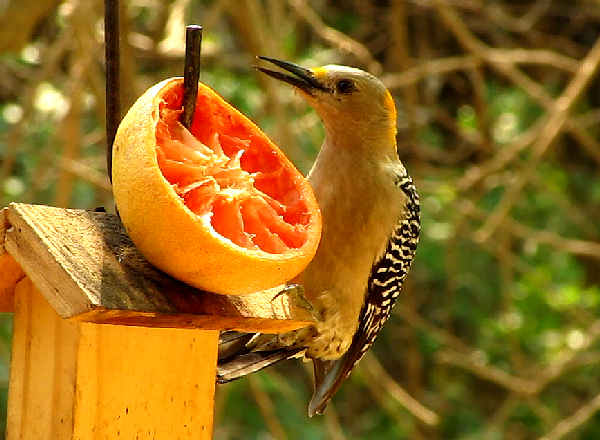 All birders know that Texas means birds, and Texas woodpeckers are no exception to that rule. The state’s thirteen species cover all five native woodpecker genera. No Texan or Texas tourist is ever far from a wonderful woodpecker experience anywhere in the state.

Finally, in the subtropical south they pick of the Southern Hemisphere spillover. Texas Melanerpes woodpeckers provide a good example. Of the six native species, four make a home in Texas trees.

Begin with the Golden Fronted Woodpecker, pictured at the top of the page. It’s a subtropical spillover. Most of the population lives in Mexico and have subsequently migrated north through Texas, with a small population reaching Oklahoma.

They are very gregarious birds, easily adapted to residential areas. Put your basic fruit or nuts in a feeder and they are there. They also don’t mind fighting over the feeder with other birds to establish the basic feeder pecking order.

Acorn woodpeckers, perhaps the best known of the western species, also found a niche in Texas.

They inhabit the oak groves of the West Texas Trans Pecos, where they spend their days gathering acorns. Once gathered, the acorns get stored in tree holes or nearby wooden structure such as fences and telephone poles.

Red-bellied and Red-headed woodpeckers are the two Texas Melanerpes with an eastern and Midwest influence.

The name red-bellied can be a bit misleading. The stomach feathers show only a hint red color. The back and top of the male’s head is red. Females lack the red crown but do have a red patch on the nape of the neck. Their diet also consists of in season fruit, nuts and insects, consequently they are very well known as feeder birds.

In Texas, most of the population are year round residents of forest and woodland areas of the east.

On the other hand, Red-headed woodpeckers in Texas are year round residents in both the northern Panhandle and east.

There’s no mistaking it for other woodpecker species. The head, covered in a set of distinct red feathers contrasts with white stomach feathers. Males and females share this feature. Juveniles have brown feathers on the head for their first year.

Pileated Woodpeckers are habitat adaptable and have managed to maintain a sustainable population in the eastern Texas forests despite decades of deelopment..

Except for South Texas, Northern Flickers are a common Texas woodpecker.

During winter migration, flocks of Flickers also visit the Lone Star State, including hybridized groups. In the case of hybrid flickers, it would be difficult to say that an individual would be a Yelow-shafted subspecies solely by the presence of yellow feathers under the wings.

The only woodpecker species on the Endangered Species List, the Red-cockaded Woodpecker makes its home in the mostly longleaf pines of the Southern United States. Habitat encroachment severely limited their range and breeding capabilities. Look for it at the William Goodrich Jones State Forest or other areas in the Pineywoods of East Texas.

Downy and Hairy woodpeckers are almost lookalike Texas woodpeckers, common throughout most of the state. Downy Woodpeckers, the smaller of the two, also have a smaller bill. The picture shows a female Downy without the red patch of feathers on the head.

Compare the picture of the Hairy with the Downy and the larger bill of the Hairy woodpecker becomes obvious. Otherwise, the black and white striped face, white belly and back feathers look very similar. Males also have a red crown.

Both species are comfortable in forests and residential areas alike. In Texas they share year round residence in the eastern half of the state, with a small breeding population in the Panhandle. There’s also an anomalous small population of both in the western most areas of th Trans Pecos.

A pattern of striped feathers on the back and spots on the breast provide initial identification marks. Males, like the one in picture two also have a red cap. They are regular visitors to backyard feeders.

Some states are better than others for finding sapsuckers. Count Texas in that group. Three of the four native sapsucker species can be found drilling wells in trees around the state.

Williamson’s Sapsuckers inhabit the mountain areas of the West, including the Rocky Mountains, the Cascades and the Sierra Nevada. There’s a small population in West Texas.

The Yellow-bellied Sapsucker is the most far ranging of all the native sapsucker species. It breeds across Canada and migrates to Texas during the winter season.